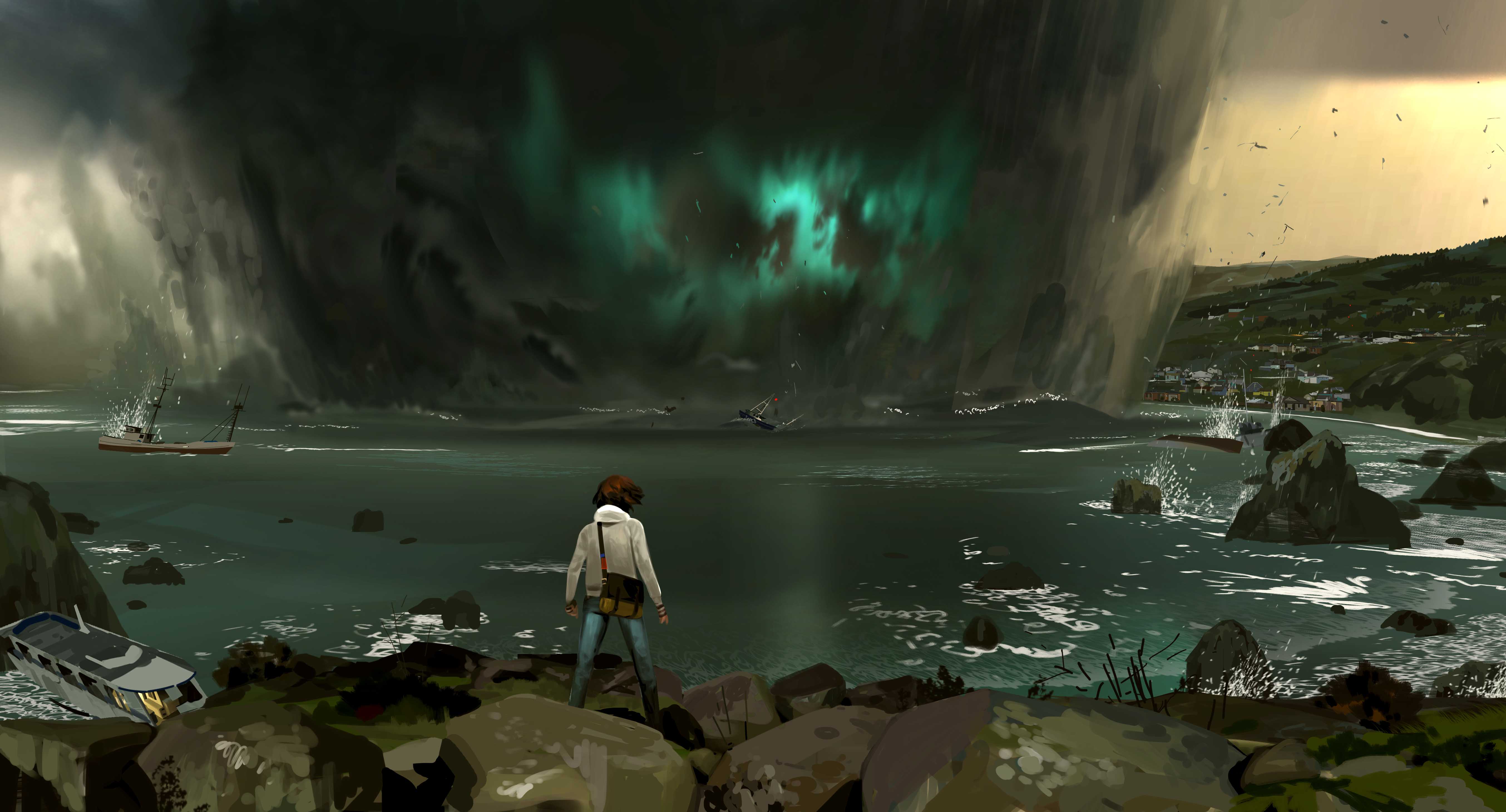 LIGHTNING FLASHES AND THUNDER BOOMS in the final minutes of Life is Strange's fifth episode. Max Caulfield, Life is Strange's protagonist, looks out over a storm-ravaged Arcadia Bay, the game's town. Beside her stands her best friend, Chloe Price. The storm will raze the town in mere moments. Only Max, a shutterbug with the ability to travel backward in time, has the power to save it. There's just one problem.

To save Arcadia, she has to sacrifice Chloe by rewinding reality to the time and place where Chloe is killed early in the story. Max can choose to save Chloe, but doing so dooms Arcadia Bay and everyone in it.

Centering Life is Strange on time travel was Dontnod Entertainment's intention. "The very beginning of the game came from of the founders of Dontnod," recalls co-director Raoul Barbet. "They asked some of us to think of a game with rewind mechanics. Dontnod was proud of Remember Me, and they wanted to build another game with that mechanic."

The concept of altering the natural course of events is where the similarities between Remember Me and Life is Strange end. Remember Me's abilities to steal and manipulate the memories of other characters serve as an indirect sort of time travel: By rewriting bits and pieces of a character's past, players effectively altered history for that character. However, manipulating time was one of many tools at players' disposal.

"Very quickly in Life is Strange, the idea was to have a rewind power as the main mechanic of the game," Barbet continues. "When you think about going back in time and taking a different action, for us, combining that with adventure game was interesting."

Life is Strange opens with Max Caulfield, then a senior in high school, receiving a vision of Arcadia Bay's lighthouse being destroyed in a storm. When she flees to the restroom to regroup, she witnesses another student kill a girl—Chloe Price, Max's childhood friend. It's the first time Max and Chloe have seen one another since Chloe's father died in a car accident years earlier, after which Max and her family moved away, leaving Chloe alone to deal with her grief and growing resentment over what she perceives as Max's abandonment of her.

The problem at hand, Chloe being murdered in a bathroom, doesn't leave the girls much time to reconnect. Shocked at rediscovering her closest friend and terrified and furious at her death, Max triggers a latent ability to rewind time and saves Chloe. Through the remainder of the game's five-episode arc, players will come to crossroads where they'll have to choose whether to perform a certain action and, later, will be given an opportunity to travel back just far enough to turn left where they turned right before, figuratively speaking.

Life is Strange's team knew they were writing two stories. One took place in the game, and followed Max and Chloe as they rebuilt their relationship and made decisions that affected the narrative's outcome. The other took place outside the virtual universe, a meta form of storytelling predicated on the likelihood that some players would reload their progress to a crucial moment and make a different choice if they disliked how their first option shook out.

"It created a meta game because you've always had players who reload their saved game," says Barbet. "Here, the idea of that is inside the game. Your character is aware of the fact that she can rewind time. She can remember some information, and rewind with that info in mind."

Players are aware of Max's power. What's more, they're encouraged to use it. That awareness makes for a great deal of freedom, historically an alien concept in adventure games, in which puzzles and character interactions tend to follow a linear track. "From a technical point of view, it was a nightmare," Barbet admits. "We had to remember all the particulars, all the animations and effects of a scene, because you could rewind to the very beginning of it. It was quite something. For Life is Strange 2, we said, 'We're not doing that anymore,'" he continues, laughing. "It was less difficult at least in that way."

Even choices that seem minor have the potential to spark a butterfly effect that cascades across Life is Strange's episodes. Therein arose another key differentiator between Remember Me, an action game, and Life is Strange. Dontnod intended for Life is Strange to be slower paced. That contrasted nicely with Telltale's The Walking Dead, the most popular episodic adventure game since its release in 2012, and the most transformative on the genre. Instead of hunting down items and combining them in esoteric ways to progress, the heart and soul of old-school adventures like Space Quest, The Walking Dead wove a gripping narrative and kept players concentrated on making choices that affected their morality and the odds of survival for characters they met on their journey.

"Every choice in The Walking Dead has you stressed," Barbet explains. "It's about life-and-death choices where you have to choose quickly. On Life is Strange, it was the opposite. You had all the time you wanted to make choices."

The rewind mechanic lends itself to Life is Strange's more laidback approach to decision-making. If players are unsatisfied with the outcome to a choice, they can redo it. "Quite early in Life is Strange, we decided to have what we call Zen sequences," says co-director Michel Koch. "You just sit there and let time flow while you learn more about the characters and story. We're not rushing players forward unless pacing [calls for urgency]."

Giving players the freedom to experiment put an even greater onus of continuity on Dontnod's shoulders. Although the stress of making a choice should be negligible in all but the most critical scenarios, such as the game's finale, each choice should feel important in order to encourage players to roll with it and see where the narrative goes from there, rather than continually rolling back their saves.

"You should always make players think about their choices," says Barbet. "You may not be happy with those consequences, which makes the next choices difficult to make. That helped us on Life is Strange 2, to write choices that would divide people. It's interesting to make people think about situations."

STORY-DRIVEN GAMES have long been snubbed as interactive novels or movies by "hardcore" gamers more interested in shooting up a room and triggering big explosions. One reason for this may have been that primordial adventure games lacked the technology to immerse players in their worlds. The rise of games like Heavy Rain and The Walking Dead changed that. Not only was their writing solid, their creators had the tools to immerse players in their worlds, leaning into rather than shying away from the trappings of film production. Players could lose themselves in a game's story as easily as they did a book or a movie.

With a full game that was released all at one time, we wouldn't have been able to have this huge community. The gaps between episodes were times when players could discuss the characters and story.

"I think what we wanted to be at the core of our game was cinematography and music," says Barbet, who was free to flex his cinematographer's muscle in designing scenes for Life is Strange. "At least on my side, I wanted to have great camera angles with music. That's something we tried to do from the beginning. People might see that and say, 'Oh, it's just a movie,' but it lends something to our scenes and characters: the way you frame them when music begins, when it stops, et cetera."

It was for those reasons, among others, that Dontnod embraced an episodic format for Life is Strange. Early in brainstorming sessions, writer Jean-Luc Cano talked with Barbet and Koch about the advantages of television shows. Studios such as NBC typically ordered seasons of shows in batches of 20 episodes or more, airing them beginning in the fall and running through late spring. That ample amount of time allows TV writers to think long-term about characters and stories.

"We knew we wanted to take more time, and to structure the story into smaller chunks where players could enjoy one episode that's more peaceful, learning what the story wanted to tell them at that moment, and think about it," Koch recalls.

That was another advantage of television. When a show ends on a cliffhanger, fans gather around a watercooler—physical or virtual—to vent their frustration at having to wait, and to speculate on what could happen next. Dontnod spread the five-episode arc of Life is Strange across the early spring and late summer of 2015. The wait between each episode meant fans could gather online and talk about what had happened, and what might lay in store. It also gave newcomers time to jump aboard.

"With a full game that was released all at one time, we wouldn't have been able to have this huge community," says Barbet. "The gaps between episodes were times when players could discuss the characters and story. Also, that format helped us focus on characters by filling in blanks. When developers get feedback from players between episodes, we can react and adjust gameplay and character development."

Even so, Barbet and Koch knew structure was paramount. They wanted to leave each episode at a juncture that left players wanting more, while also giving closure to smaller plot arcs. Koch pointed out that big-budget games such as Naughty Dog's The Last of Us worked in roughly the same way. The last of Us was released as a full game, but its stories unfolded over summer, fall, winter, and spring.

Life is Strange worked similarly. "You can play them all at once, or stop playing at the end of a season," says Koch of the game's five episodes. "I think if we'd made this game as a [single release], we would have still wanted breaks between chapters. It would have been us saying to players, 'If you want to stop, maybe stop here, then you can go on to the next chapter.' That's sometimes the issue with bigger, longer games. We don't know when players will stop playing. I've been in this position: If I stop playing a game that's a bit slow, I might not go back to it until later [and forget what happened]."