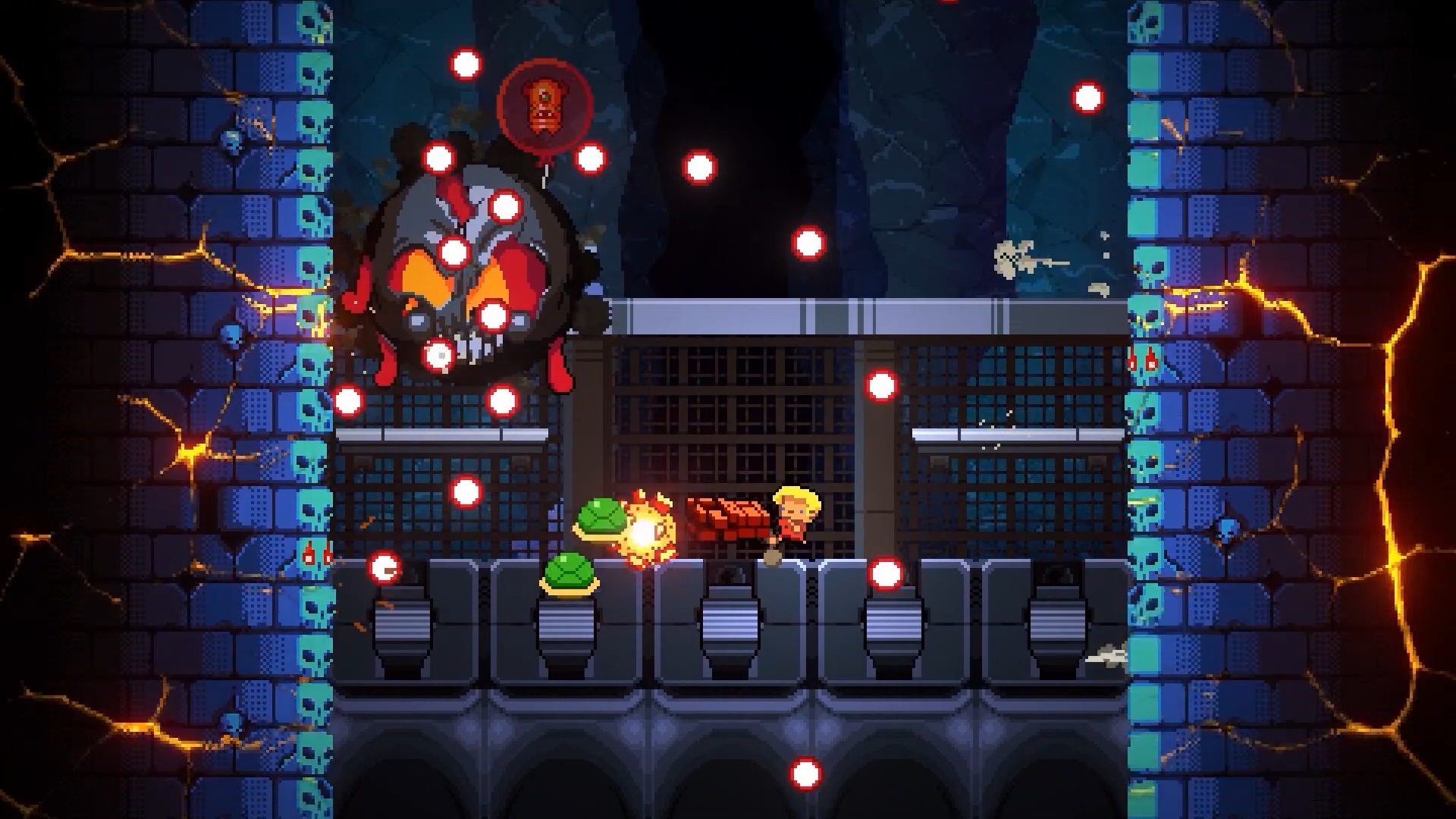 So you've managed to enter the Gungeon. And not only that, you've somehow survived all of the trials and tribulations contained within. Congratulations! Not everybody can claim success with Devolver Digital and Dodge Roll's last roguelike outing. Some may be wondering what's next. Well, now can you escape? Yes, after all of trouble of getting in, now it's time to get out in Dodge Roll's follow-up effort, Exit the Gungeon.

If this sounds like more Enter the Gungeon, that's not entirely the case. Exit the Gungeon is a smaller, but fairly different animal. For what it is, Exit is a different kind of fun romp than its predecessor. They do share one thing in common, though. They're both incredibly difficult games that still feel like a good time, no matter how often you die.

Exit the Gungeon takes place in the immediate aftermath of Dodge Roll's last game. It  starts off by briefly recapping players on how they got here without spoiling the finer details of Enter the Gungeon's ending. The Gungeon itself has been through such a strain over the course of the last game that it's now falling apart, so the idea is to make a daring escape before the whole thing comes down.

There's no time for exploration now, which is the narrative reason for Exit the Gungeon's shift from a top-down dungeon crawler to a straight-up Contra-style arcade shooter. Those who have played Enter the Gungeon now need to adjust to shooting along a 2D plane, a transition that Dodge Roll pulls off well. The main principle of avoiding bullet hell barrages of enemy fire with the dodge roll mechanic is still in place, just with a few minor differences. Namely, the transition to 2D now means there's a jump button and it can also help dodge bullets.

After a friendly tutorial session, it's time to jump into an elevator shaft and take on a cavalcade of enemies, many looking like they came right out of Enter the Gungeon. The first thing to note is that there isn't much room to maneuver, with only a short elevator shaft to work with. It doesn't get easier as the game progresses, especially with the modes of transportation getting shabbier.

The other thing to note is that the player's gun will frequently change automatically as the action progresses. This is one of the more undesirable elements of Exit, as it becomes possible to get a less-powerful (or even a total dud) gun when there are numerous enemies on-screen or during a frantic boss battle. While getting through the game largely depends on skill, this throws in an RNG element that can sap the fun out of the game if it kicks in at the wrong time. It especially stings in Exit, because death means starting all the way back at the bottom.

Outside of that, much of Exit runs on the best combat elements of its predecessor. Enemies have recognizable patterns and the randomized boss fights are both whimsically wacky and crushingly challenging. Like Enter, Exit's boss battles will come across as hard for the first few battles, but success in these games isn't about leveling up or finding the right gun. It's about learning and adapting. Nothing that Exit (or Enter, for that mattter) puts forward is unfair. Everything is doable, as long as the player is willing to study the patterns and learn the mechanics. (A little luck doesn't hurt, either.)

There are a few other elements from Enter the Gungeon in place with Exit, but noticeably stripped down. For example, the first game's shop is in place and can help with refilling supplies. But Exit is missing its predecessor's biggest charm: the exploration.

There's no massive dungeon to explore. There are no cool secret rooms or interactions to discover. There's no joy from finding a hidden treasure chest. Or for that matter, there's no stress from wondering if the treasure chest is going to come to life and kill you. No, this is a straightforward escape. I don't want to knock Exit too much for not being Enter, because it was never meant to be. Dodge Roll had a specific design goal in mind and for what this is, Exit the Gungeon is great at what it does. But I won't deny the initial disappointment from losing some of those moment-to-moment highs that come with exploration.

That's not to say there isn't anything to find in Exit. Beyond random rewards, players will find that various denizens of the Gungeon have been imprisoned over the course of their runs. Defeating bosses leads players to their cells, at which point they can free them and send them back down to the game's starting point. That's as close to a progression point as one will get with this roguelike, but that's fine, because the freed characters can help out by selling goods or offering advice for moving forward.

Those who are looking for variety can find different stage layouts depending on which of the game's playable characters are selected. There isn't anything wildly different from characer-to-character, but it's different enough to keep the action from becoming too repetitive.

Compared to Dodge Roll's last game, Exit is a significantly shorter experience in multiple senses. The overall adventure is a shorter one than Enter was, tasking players with surviving several floors with a few stops along the way. It's also shorter in the sense that playthroughs can be as brief as a few minutes, depending on how tough the enemies get on a particular run.

In the end, that's why I can appreciate Exit for what it is rather than what it isn't. Is it another Enter the Gungeon? No, it isn't. But as a quick arcade romp, it's a blast. It shows that even when shifting genres, Dodge Roll knows how to craft a good roguelike and keep players wanting to punish themselves more and more with each run.

This review is based on a Steam code provided by the publisher. Exit the Gungeon is out now on PC, Nintendo Switch, and Apple Arcade. It is available for $9.99. The game is rated E.