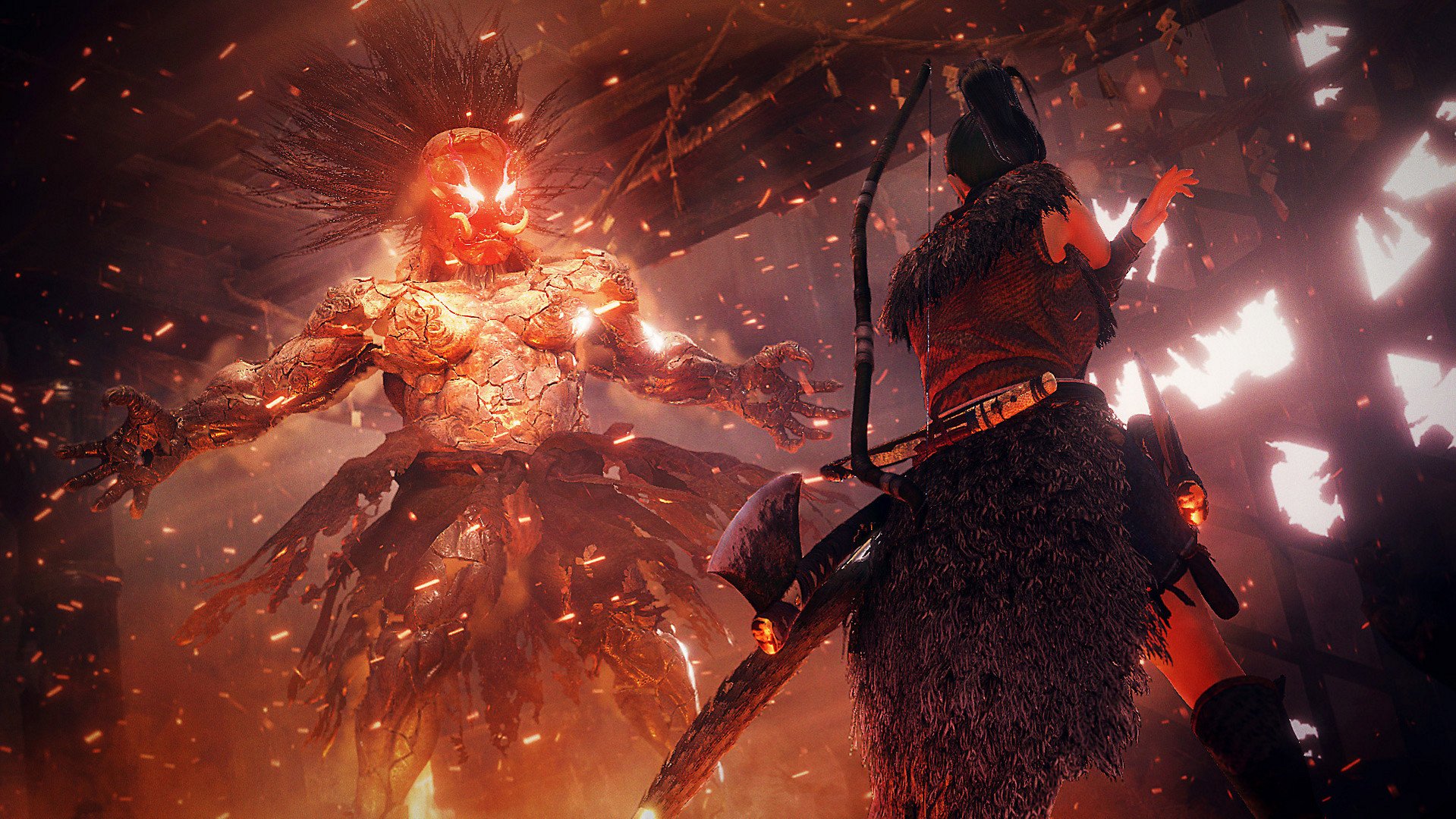 Unless you spend some time in side missions, the Enenra boss fight will be the second boss you encounter in Nioh 2. This fiery demon is extremely challenging, has a whole lot of moves, and takes place in a compact arena. You’ll need to bring your A-game if you want to walk away from Enenra victorious.

Before the fight begins, make sure you’ve got the shortcut unlocked between the shrine and the boss room. This will save some time on the boss run. To unlock said shortcut, you will need to make your way up the ladders in the building to the rafter, and then drop down to the shrine where the door can be opened.

As for the fight against Enenra, the main idea is to dodge as much as possible. It has only two long range abilities but otherwise tends to attack with punches and kicks. Whenever Enenra begins a melee combo, dodge and follow up with a swift attack before getting your distance.

When Enenra summons the Dark Realm, its powers grow stronger and it attacks with more ferocity. Getting it out of the Dark Realm as quickly as possible is critical. In fact, you will want to get all of its Ki down so you can follow up with a critical attack when it’s downed.

As for how to deal with Enenra in the Dark Realm, there are actually some environmental traps that can be used against it. These traps help chip away Enenra’s Ki without you using your own Ki – which is vital for when you’re in the Dark Realm. To do this, bait Enenra over to one of the three beams in the room and have it hit the beam. The floor above will break, dumping water on this fiery boss.

Save the beams for whenever Enenra is in the Dark Realm and try to only use one at a time. Chances are you will encounter a few Dark Realms before the fight is over.

The only other tip would be to move around Enenra in a clockwise fashion. This is the best way to avoid its attacks without needing to dodge.

Enenra has a lot of attacks, and while they deal a tremendous amount of damage, they are relatively slow. When in the Dark Realm, Enenra’s moves and attacks become super powered by fire. Do your best to avoid getting hit in this state.

Slam: Enenra will hold both arms in the air for a few beats, then slam them down leaving a Yokai Realm on the floor.

Invisible dash: Enenra will raise both arms, turn invisible, and dash toward you.

Fire minefield: Enenra will summon fire traps around it that will explode shortly after.

Tornado throw: Throws out three or more tornados that loosely track you.

Jump slam: Enenra jumps into the air and slams down.

Tornado shift: This can be interrupted with a Burst Counter.

Grab attack: Enenra will attempt a grab attack that can be interrupted with a Burst Counter.

Punch combos: Enenra will do a series of punches, which are slow and easy enough to dodoge.

Two-kick: Enenra will do one slow kick, wait a few beats, and then do another. Don’t get fooled into thinking you can attack him between kicks.

Punch-kick combo: The boss will punch then kick, then repeat. Simply rotate around it to avoid this attack.

The Enenra boss fight in Nioh 2 can be a tricky one to master. It’s very easy to get one-shot by this fiery yokai, or get clipped by some of its attacks. However, by baiting out certain attacks and using the environment, the fight can be made just that little bit easier. Be sure to take a look at the Shacknews Nioh 2 page for some more helpful guides.