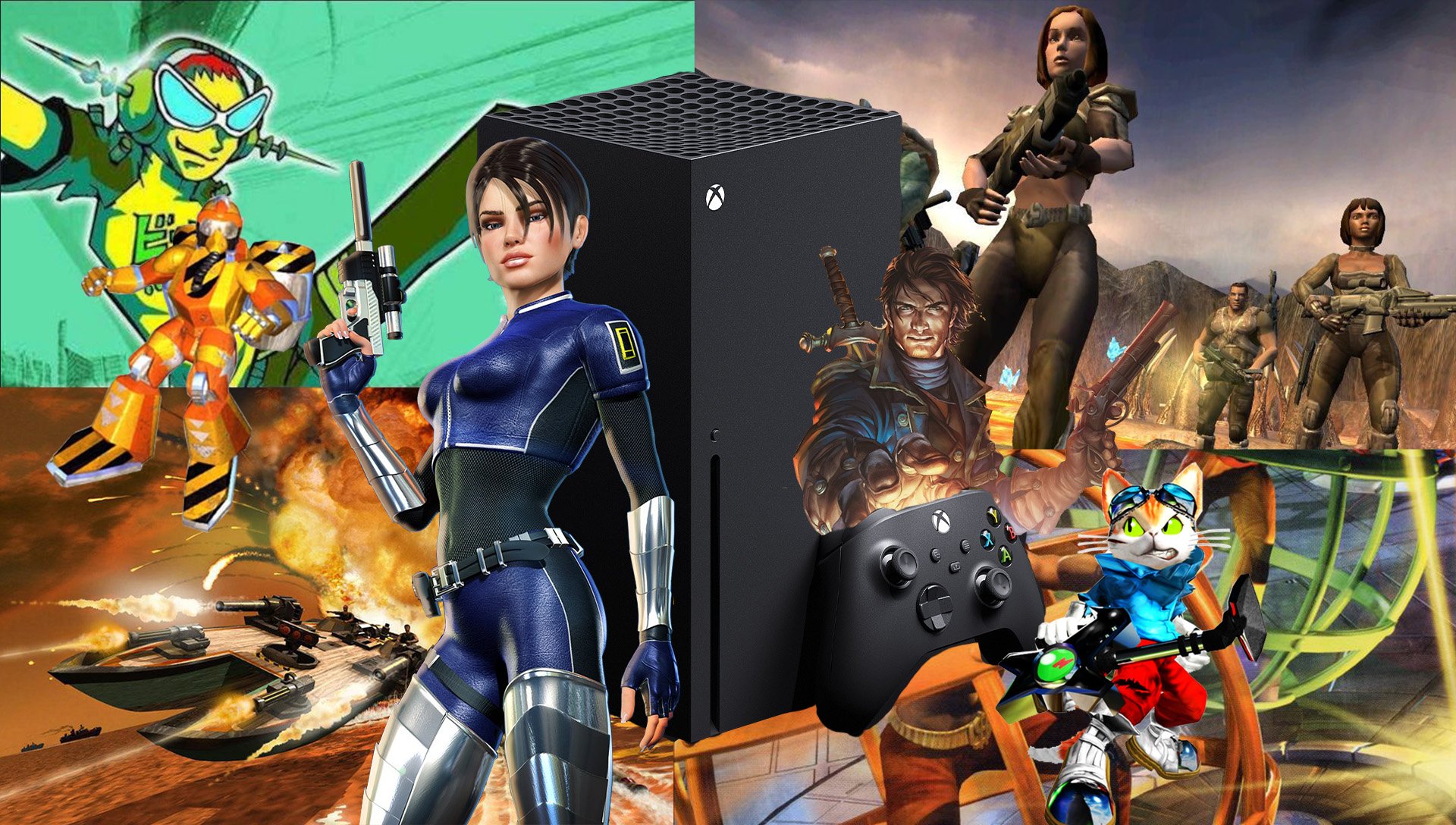 7 Xbox Series X games we need in our lives

The Xbox Series X is launching at the end of the year, and while we know there will be a transitional period where games will launch across new and old consoles, we can’t help but look ahead at what could be. To this end, there are a lot of games we would love to see become exclusives for Microsoft’s next flagship console. Xbox has a massive catalogue of games it can draw on from the original console and that of the Xbox 360, games that never saw modern sequels or otherwise disappeared into the night. So let’s consider some Xbox Series X games we need in our lives.

This is going to be the most obvious choice out of all of the available options. Fable was a household name for Microsoft for years. The original title on the OG Xbox astounded gamers with its quirky fantasy setting and unique take on magic and combat. Fable 2 was critically claimed and while it didn’t receive the same level of praise, Fable 3 was equally enjoyable.

For a lot of fans, it’s easy to think that Fable ended there, but it didn’t. The series saw a Kinect title called Fable: The Journey as well as a collectible card version, Fable Fortune. If you dimly remember these titles, you’re not alone. Since then, the planned Fable Legends was canned and Lionhead Studios was shut down.

And now, in the age of numerous Skyrim ports and challenging Soulsborne titles, there’s room for a quirky fantasy title on Xbox. Microsoft has a lot of talent in-house after all the acquisitions, and we’d love nothing more than to see one of these teams take on the challenge of developing a proper entry in the Fable series.

Another clear must-have title is Perfect Dark. After the acquisition of Rare, Microsoft has gained a vast array of IPs that it can develop for the Xbox Series X. While players already have their FPS itch scratched with Halo, there’s plenty of room for the strategic and objective-based gameplay of Perfect Dark.

The original game released in 2000 on the Nintendo 64 and for a while there were rumors of a sequel coming to the original Xbox. It wasn’t until 2005 that a sequel was released on Xbox 360. Let’s let that timeline sink in for a second. And now, some 15 years later, the only Perfect Dark games players have are the Xbox Live Arcade version and the two games included on Rare Replay.

A reimagining of Perfect Dark for the Xbox Series X could include all the highlights from the original: varying objectives based on difficulty, arena-based multiplayer, and even counter-cooperative play.

Crimson Skies is one of those titles that appeared, amazed everyone, and then vanished into thin air. The team behind Crimson Skies, FASA Studio (who also created the criminally underrated Shadowrun title), is no longer around but that doesn’t mean Microsoft has no means of reviving this game.

Aside from Flight Simulator, there are very few games where the focus is on flying, let alone flying and combat. A title like Crimson Skies, which was one of the first to take advantage of Xbox Live, could fit right at home alongside the likes of Gears of War, Forza, and Microsoft’s other titles.

Here’s where the list starts to get a bit more niche and unique. The original Xbox had a whole lot of bizarre titles that tried really interesting concepts. One such game was Blinx: The Time Sweeper. In this game, players took on the role of Blinx, a cat that used a vacuum to control the flow of time and defeat monsters. The game released to generally positives reviews and even saw a sequel two years later.

Bringing the Blinx series back to life could give Microsoft its own Mario-like title. Right now, Mario titles are standout examples of excellent platforming and collect-a-thon games. This is quite simply an area where Xbox has no comparison.

Platforming is a big element of Mario titles as well as in Blinx, but where Blinx could see to differentiate itself is with its time-based puzzles. Throughout the Blinx games, crystals had to be collected for the player to pause, rewind, fast forward and slow down time. Creators have only gotten savvier in recent years and this would provide the perfect opportunity to create some truly mind-melting puzzles.

There are not a lot of mech shooters these days. While there has been some noise with Daemon X Machina and Metal Wolf Chaos XD, they don’t quite compare to the majesty that was Phantom Crash.

Back in 2002, a little developer by the name of Genki released Phantom Crash on Xbox. This was a fast-paced mech shooter where each in-game day presented the players with new arena fights, different stock in stores, as well as a rich story with a whole lot of subplots.

Part of the joy of Phantom Crash came from tweaking every aspect of your mech. There were cosmetic changes like paint and decals, but also more important alterations. Changing your mech’s weight (by stripping off parts) would make it faster yet more susceptible to damage. Deciding on the right weapon build for your given mech type was also critical, as mechs excelled in different areas.

Perhaps the age of mech-based combat has passed, but a sequel to Phantom Crash on the Xbox Series X would be incredible. If not, then maybe another MechAssault game?

Blast Corps (that’s pronounced “core” for those playing at home) was an iconic title from the Nintendo 64 days, developed by none other than Rare. The premise of the game was simple: a nuclear missile carrier is moving in a straight line, destroy everything in its path so it doesn’t explode.

With the goal set, all that players needed were tools. And what tools do you use to destroy buildings, farms, and other structures to ensure the safe passage of a nuclear warhead? Why a robot, dump truck, bulldozer, and even a tri-wheeled vehicle of course.

The game was a critical success and an absolute delight to play. There is something deeply gratifying about demolishing everything on a map. Given today’s game’s graphical fidelity and physics, it would be truly amazing to see Blast Corps reimagined for the Xbox Series X.

While we’re at it, how about Microsoft starts reviving as many of Rare’s old IPs as possible? Jet Force Gemini, Banjo-Kazooie, Conker’s Bad Fur Day, and Diddy Kong Racing to name a few.

Do you understand the concept of love? For those that don’t, the answer is clear: Jet Set Radio. Back in 2002, in the early days of the original Xbox, Sega brought a little-known franchise to Microsoft’s first foray into the console market. Jet Set Radio Future was the sequel to Sega’s Jet Set Radio, a title that originally released on the Dreamcast, and it was the inline skating equivalent of Tony Hawk’s with added style.

Set in futuristic Tokyo, players took on the role of a skater from the group known as the GGs. The premise was that a megacorporation was cracking down on freedom of speech and forcing skaters off the streets. Players needed to reclaim the streets by spray painting over other gang’s graffiti tags.

In order to move around the interconnected levels, players would use skates. In a move that greatly contrasted the semi-realism of Tony Hawk games, Jet Set Radio allowed players to skate up poles, ride walls, grind across telephone wires, and perform some truly outrageous in-air moves. All of this tied into the exploration the game offered, rewarding those who explored every nook and cranny.

Since its release, there hasn’t been another Jet Set Radio game. Now that Sega is entirely focused on games, hopefully, we see this truly unique series reborn on the Xbox Series X.

There are far more game series we would love to see on the Xbox Series X. Basically, any title that never saw a sequel (looking at you Brute Force) we want to see Microsoft revisit at some point. But the community is just bigger than our own wishes – let us know in the Chatty thread below what games you’d like to see released for the Xbox Series X!