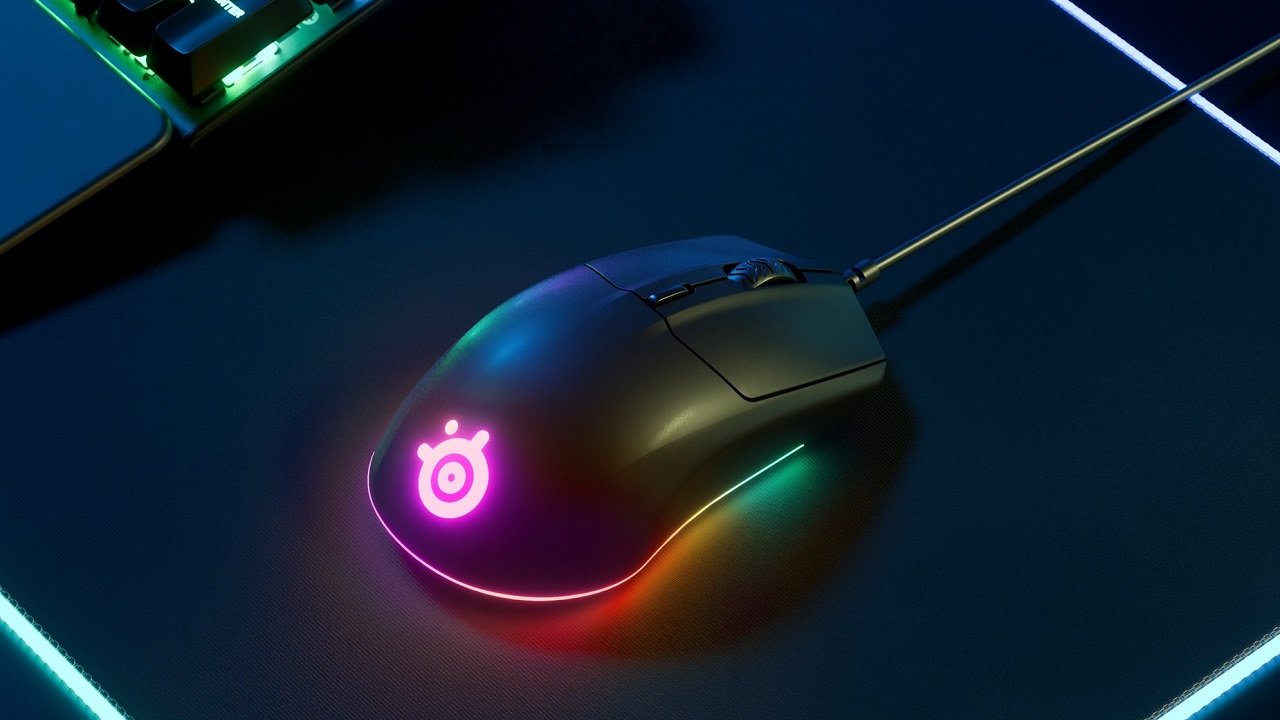 When it comes to gaming mice, many often go for performance, style, and affordability, but it’s not often you get all of those qualities in one satisfying package. Such is the offering of the SteelSeries Rival 3 gaming mouse. It’s a lightweight, RGB-lit little device with six programmable buttons, a wealth of customizable performance options, lighting options, and more. While it misses out on some of the features of more technically sound mice, its low $30 USD price tag and sturdiness makes it an excellent and reliable budget gaming mouse.

The Technicals of the SteelSeries Rival 3

The SteelSeries Rival 3 mouse comes in a rather simple box that has only the mouse, its cord, and instructions to go with it. The mouse is 2.7 ounces with a six-foot rubber-covered cable, six buttons, and three colorized RBG zones that can be customized with the lighting of your choice. It features the SteelSeries TrueMove Core sensor and its sensitivity can be set from 100 to 8,500 CPI (counts per inch). It definitely isn’t up to snuff with more high dollar mice that can reach around 16,000 to 20,000 CPI or more, but it most certainly gets the job done and switching between various sensitivity settings is as simple as tapping the mouse button sitting just behind the scroll wheel.

The whole of the SteelSeries Rival 3 is light, yet it feels solid and responsive. The bottom of the mouse contains three plastic feet and they even feature grooves so they can easily be removed and/or replaced should you need to, although replacement kits don’t come with the base device. Even so, the whole thing has a definite feel of smoothness about it. It’s not a very big mouse at only 4.75 inches long x 2.64 inches wide x 1.49 high, but it’s got enough depth to feel comfortable even in a large mitt like mine that often goes between claw and palm grips. From top to bottom, it looks and feels nice and the mouse buttons have a nice, responsive snap to them. Rated to last 60 million clicks, the mouse seems like it can take a beating, though I’m not sure I’d lose my cool and expect the little device to survive. Even so, its grip and movement are absolutely nice and silky on all ends.

The only part I’m not entirely fond of is the cord. Maybe I’ve become spoiled by braided cords of other gaming mice, but there’s something about the rubberized cord of the Rival 3 that just feels cheap and flimsy. I didn’t find it messing with performance really at all, but it still feels like this is definitely one of the places where they cut costs for the price tag on the device.

A big part of the SteelSeries Rival 3 is the ability to take the device and customize its performance to your liking via the SteelSeries Engine 3. Inside the program you can do a number of things with the Rival 3, perhaps most important of which is adjusting the CPI. The Rival 3 has two default settings when you first plug it in and you cycle through them with the single button behind the mousewheel. That said, you can add extra configurations to the mouse, including larger CPI settings, acceleration and deceleration of movement as your hand moves, angle snapping, poll rates, and more. You can also customize your buttons here and what’s nifty is that the Rival 3 has an onboard memory that will keep your settings when you save them, meaning if you unplug and take your mouse to another machine, the settings you’ve programmed into it will stay with you.

I should note that I’m not exactly a fan of the single switch for toggling between CPI settings. The first thing I did upon opening the program was create three new CPI settings to my liking. A single button toggle for this setting isn’t so bad in a low-risk, low-pressure spot, but in a game like League of Legends where I sometimes need to trade speed for precision on a skill shot, it came to be of extra stress when I toggled down to the lowest CPI setting and then needed to cycle back to the faster one when I was ready. It was a similar feeling in Apex Legends when I wanted to aim down the sights and look slower and ended up having to take another button press when I came out of sighted aim. It’s an extra set of clicks that simply don’t exist on other good gaming mice with two buttons going up or down on CPI setting adjustment.

The SteelSeries Rival 3 is RGBeast

I do want to mention right from the get-go that the SteelSeries Rival 3 is a veritable lightshow. The device lights up my office in a way like few other devices I've had. What’s more, there are three zones of light you can customize with varying effects to get the mood or vibe you want out of the mouse while in use. Color options come in a steady single color, slow-turning ColorShift, and pulsing Multi-Color Breath features.

It was cool to fiddle around with the Rival 3 and adjust the zones and their effects to my personal liking, but I do find it curious there’s no adjustment for the brightness on the RGB lighting. You can either have it turned on blazing with color on your mousepad or turn the illumination off outright, which just kind of feels boring. Despite its low cost, the Rival 3 should offer adjustable brightness, especially since the hardware is shown to be capable of this via the Multi-Color Breath illumination preset.

A solid performer, just a touch of limitation, and a winning price

Ultimately, the Rival 3 feels a lot more right than wrong. The device handles quite well, feels comfortable to hold and operate for long periods of time, has a neat lightshow going on, and is easy to customize in the SteelSeries Engine 3. It’s a shame it forces you to cycle through buttons, the cable feels shabby, and I hope they update the firmware through Engine 3 to give the lighting a dimmer switch. That said, when you consider that the mouse is running at just $30, lower than many of its supposed caliber and at least about half the price of a really good pro mouse, it’s really doing its job and offering more value than most other budget mice on the market.

This review is based on a product provided by SteelSeries. You can purchase the SteelSeries Rival 3 gaming mouse for $29.99 from SteelSeries and participating retailers.