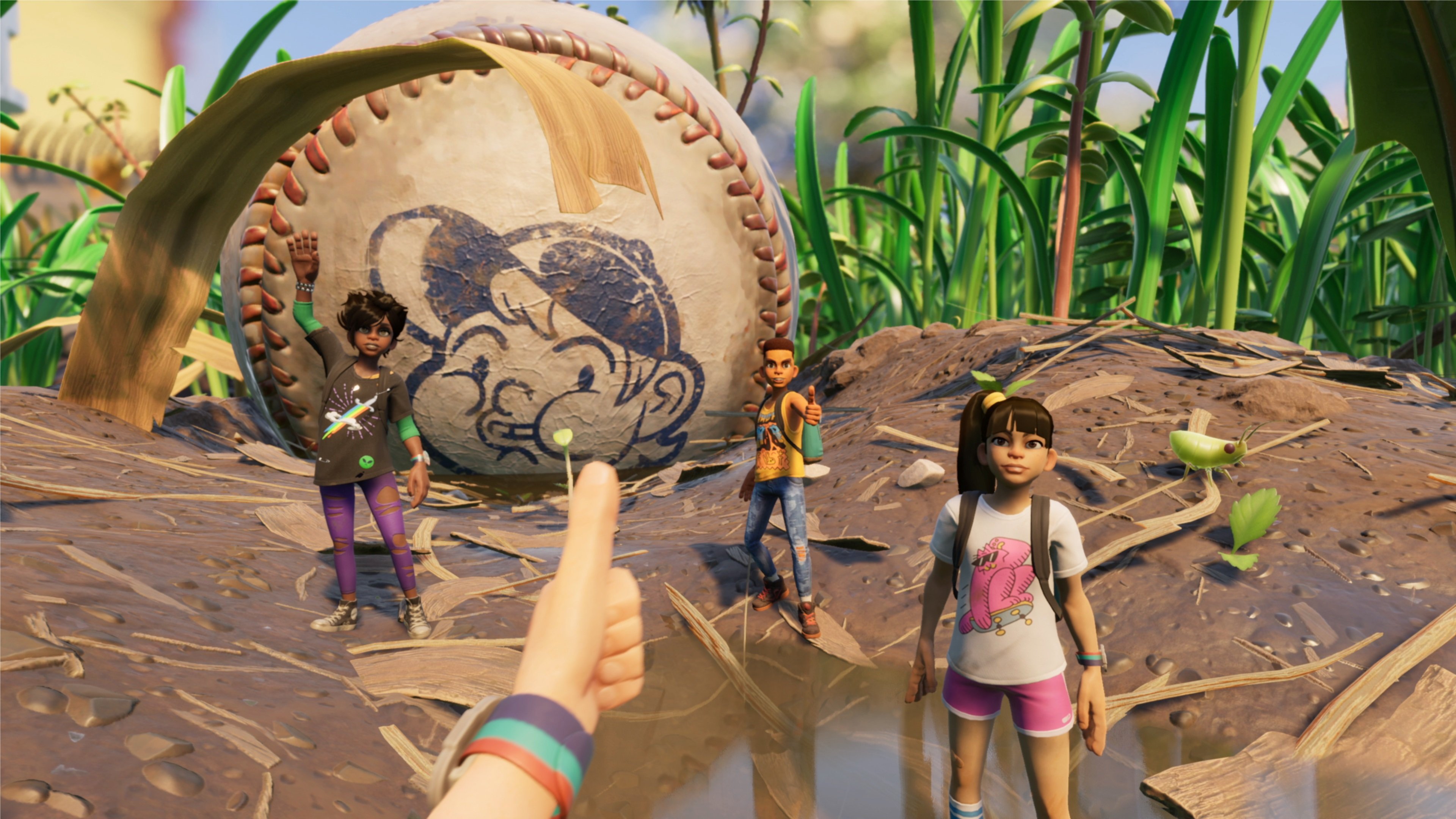 Earlier today at X019, Xbox and Obsidian Entertainment revealed their first game since Microsoft acquired the Outer Worlds developer last year. It's a small project, in more ways than one, but it's one that could grow into something epic. It's Grounded, a first-person cooperative survival game, which is unlike anything to come from the studio that released Fallout: New Vegas, Star Wars: Knights of the Old Republic II, and Pillars of Eternity.

So how does Obsidian go about venturing into this brave new world? Shacknews recently ventured with other members of the gaming press to Obsidian to take a first look at Grounded. As one might expect, this looks totally different from any of Obsidian's previous efforts, something that Game Director Adam Brennecke relishes.

"It's a big departure from what you're used to seeing here at Obsidian, but we wanted to make our own take on the survival genre," Brennecke told the assembled press. "We're introducing what you expect from an Obsidian game: building big worlds, having memorable characters in a storyline, and introducing a lot of those aspects, as well as some RPG mechanics into the survival genre."

It's a tall (no pun intended) task for Brennecke's team of just 13 people. The crew is still working on the storyline, but there is a setup for Grounded's story. There are four teenagers exploring a suburban garden as part of a scientific endeavor. There's sporty leader Hoops, her jokester friend Max, the grumpy Willow, and the nerdy boy scout Pete. They've been shrunk to the size of an ant by mechanical device. After initially exploring the garden, the device malfunctions and is unable to restore the kids back to their normal size. That forces them to try and survive against the garden's various dangers.

Many of the elements of a survival game are in place in Grounded. Players must make sure they're well-fed and hydrated. There's a wrist monitor called the Sca.B, which measures a player's hunger. Staying hydrated is a simple matter of collecting fresh dew drops from nearby grass. Nourishment can be a more involved process. The hands-off demo showed the player taking down an aphid and collecting its raw meat. It's not recommended to eat an aphid raw, so players must build campfires. The campfires both keep players warm and also allow them to cook any meat they find.

There's a lot to explore out there, so in addition to having a base to house yourself, it's also possible to mark your base in order to find your way back. There's an entire world unfolding and one of Grounded's most interesting elements is that the whole ecosystem flows beyond the player's view. Even if there's something totally outside the player's purview, the game will continue to simulate what's going on, with the player able to influence the entire ecosystem through their actions. For example, eating those aforementioned aphids means its natural predator ladybugs will have to go somewhere else to find food and they'll likely disrupt another bug's pattern along the way.

As for what's explorable, there are bugs everywhere. Weevils can help lead players to food sources. Mites can leave fuzz behind, which can be used to craft clothing and armor. Insects will naturally encounter one another and either work together (communicating with pheromones) or fight against each other, as nature intended. On the subject of nature, some insects will be friendly and others will be hostile, depending on their natures. As for spiders, they're largely nocturnal, so players will often find them dozing in the daytime. There's a full day-night cycle in place, so spiders will become much more active after the sun goes down. Spiders also house valuable supplies, which paves the way for a stealth element. Sneaking into the spider dens quietly is essentially, otherwise it'll wake up angry. And no matter how good your weapons might be, taking down a massive spider can be a daunting task. The interiors of spider dens and ant colonies can be pretty dark, so make sure to craft a torch in order to see inside. After a full day of exploration, take whatever supplies you find, like grass blades, and build a fort to protect against evening predators. Even the most intrepid explorers need to sleep, so make sure the fort is rock solid against outsiders.

The garden is more than just whatever nature provides. There are a lot of man-made objects around, as well. There are baseballs, pencils, and random junk laying around the garden. Some of these objects can even be used in crafting recipes. For example, players will eventually be able to take breath mints and craft some dangerous weapons. Crafting is an integral element in moving forward in Grounded, with certain areas gated off in a Metroidvania style. For example, there's a portion of the garden covered in weed killer that will be inaccessible until after players learn to craft a gas mask.

There will be ample room for character advancement, with the Grounded team looking into a tech tree. The manner in which characters will progress has not been finalized, so look for more details later. In fact, there's a lot about Grounded that will be determined in the weeks and months ahead. This is a good part of the reason why the game is going the early access route through Xbox Game Preview and Steam Early Access. Obsidian hopes to perfect its survival game with a good dose of player feedback, gradually building Grounded into something that can proudly fit with the rest of the studio's storied catalog.