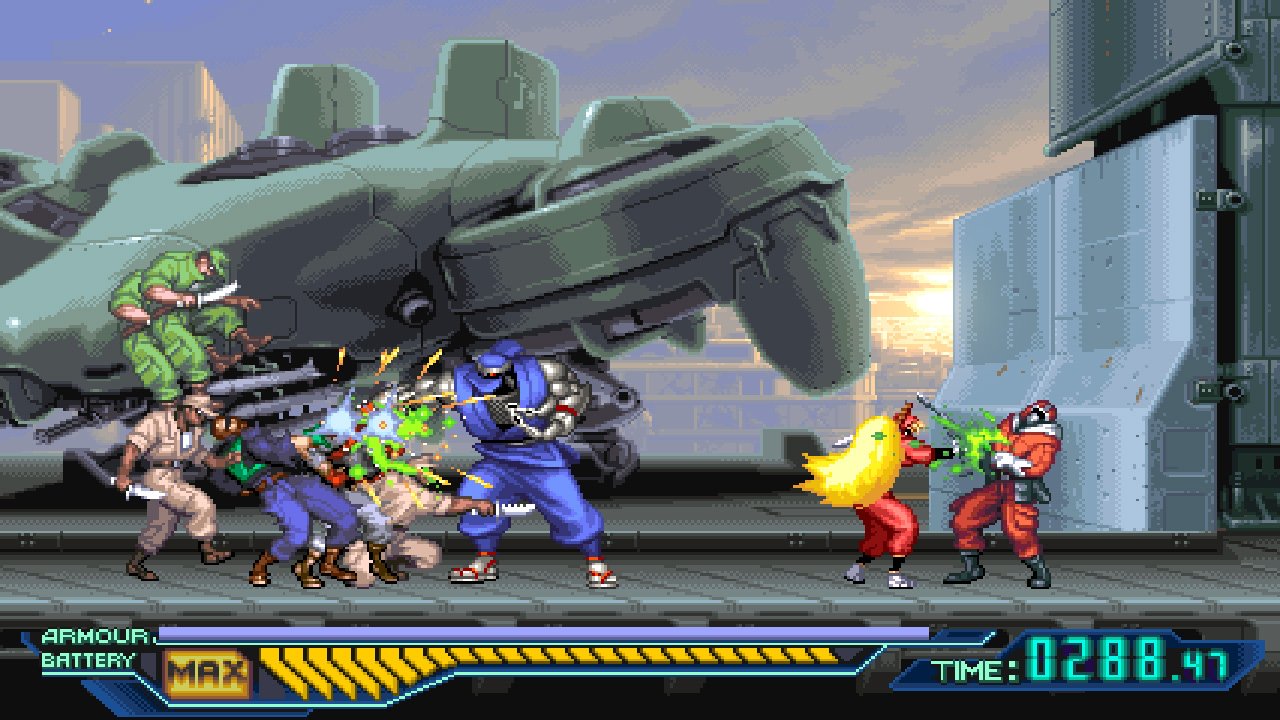 The Ninja Saviors: Return of the Warriors review

Arcade style beat-em-ups hold a special place in my heart. Countless hours were spent piledriving fools with Mike Haggar in Final Fight, pummeling foot soldiers in Teenage Mutant Ninja Turtles The Arcade Game, and eating pixelated turkeys off the ground in Streets of Rage 2. If you’re a video game developer and want to attract a wild Buffa, release a side-scrolling brawler. There’s no 2D thug that I won’t punch.

With my penchant for digital violence in mind, I couldn’t wait to break some bones in The Ninja Saviors: Return of the Warriors, a remaster of the popular Super Nintendo game from 1994, The Ninja Warriors… which is a sequel to Taito’s respected 1987 arcade release of the same name. That original game not only laid the groundwork for the series, but was also one of the most impressive arcade games at the time because of its unique display. Instead of having one monitor, Taito included three side-by-side to present a wide-screen view. Taito’s ingenuity, combined with beat-em-up action and memorable music propelled The Ninja Warriors arcade game to legendary status among some retro enthusiasts.

With that in mind, there was some fanfare for this new reimaging of the aforementioned SNES game, and it’s more than a port. Publisher ININ Games and the developers at NatsumeAtari improved on the 90s experience by enhancing the 16-bit style graphics and music, then tossed in online leaderboards, co-op, and arguably the biggest feature… two new android ninjas! But do these new additions make The Ninja Saviors a must buy for Switch and PS4 owners? Well, it depends on how much you love beat-em-ups, and whether you have fond memories of those aforementioned games.

Many beat-em-ups have forgettable plots and The Ninja Saviors continues the trend. Why did five ninjas set off on a dangerous mission to slaughter hundreds of evil henchmen? Answer… because the game takes place in a dystopian universe ruled by a tyrant named Banglar…and… well… he’s not going to overthrow himself, right? His goofy name aside, you don’t need to keep the narrative in mind as you bust up robots and gun-toting lowlifes. Save the world, and then do it again as a different character.

Speaking of which, the five android ninjas complement one another by offering unique fighting styles. Looking at the original cast from the SNES game, Ninja (that’s his real name) is a brute who moves slower than most of his counterparts but makes up for that with a few swings from his nunchucks. Meanwhile, players who prefer a more acrobatic skill set will flock to Kunoichi, who easily jumps around and sticks enemies with her throwing knives before finishing them off with a katana. Finally, there’s Kamaitachi. In addition to being the quickest of the core three, the developers gave him dual blades, one for each arm, and it’s fun speeding towards enemies and mashing buttons to slice them up.

The Ninja Saviors’ newcomers, thankfully, don’t feel like cheap add-ons shoehorned into the game. Yaksha, while small, has tremendous reach thanks to her stretchy Doctor Octopus-like robotic arms, which allow her to not only hit adversaries from a distance, but even leap-frog them. She is in stark contrast to Raiden, who is so gigantic that he takes up almost half of the screen and stomps everyone; there’s a move where he grabs two enemies and bashes them together. Even the way he throws objects is different than the other androids in the game, where instead of picking up a motorcycle overhead and tossing it, he rolls the bike like a bowling ball. I’m also a fan of his transformation from a bipedal droid into a robot that resembles ED-209 from the movie Robocop. It’s so representative of the time period. As a side note, you need to unlock Yaksha and Raiden, which gives The Ninja Saviors some much needed replay value.

Gameplay is exactly what I expected, with a steady stream of bad guys lining up for a beating. Although the artificial intelligence isn’t bright (most times they walk into an attack or stand still awaiting their fate), the five ninja androids come with several different moves to play around with, from throws to special attacks that knock everyone down, but there’s a catch, because despite these moves the AI doesn’t put up a consistent challenge; early on, for example, they stupidly walk into fan blades. But, they can be dangerous in sheer volume.

On top of that, the action in The Ninja Saviors takes place along a single plane that restricts your movement from right to left; this is in comparison to games like Final Fight and Streets of Rage, where you’re able to move up and down. Enemies occasionally jump down from above, but there’s little verticality in the game. Enemies walk off the assembly line and into the slaughter. I’m also not big on the game’s bosses, who for the most part lack imagination. There is, for example, a big guy in stage one and then two big guys in stage six; the final boss fight, however, is pretty cool from a visual standpoint.

My biggest gripe with The Ninja Saviors is that, despite being a good game, there’s nothing particularly memorable about it outside of those five playable ninjas. Ask me what I most remember in games like Final Fight, Double Dragon, and Ninja Turtles and I’ll rattle off a list of features and moments that cement those titles as the best the genre has to offer, whereas with The Ninja Saviors, the game just is. My enjoyment comes from experiencing the game with different ninja androids (especially alongside someone else via co-op) and tapping my foot to the soundtrack, which by the way… I cannot overstate how good the music is. It embodies everything I love about 80s/90s beat-em-ups. If I were to get into a real fight, I’d be OK with that soundtrack in the background.

Had I initially experienced The Ninja Warriors arcade game in 1987, nostalgia might impact my overall view of the series, but after growing up surrounded by those aforementioned beat-em-ups, the original looks average and The Ninja Warriors for SNES is marginally better. All told, The Ninja Saviors: Return of the Warriors is the best of the three because of the added features (you almost never see additional characters put into a game like this unless it’s a hack), but I went into this one pretty hyped, and came away feeling that it was a good, but not outstanding entry in the genre.

The fact that the digital version costs the same as the Capcom Beat ‘Em Up Bundle (with seven included games) at $19.99 makes it less appealing, but if you need The Ninja Saviors, I suggest picking up the physical version for $29.99 on Amazon while supplies last, since it comes with collectible items like an instruction manual and a mini poster.

The Ninja Saviors: Return of the Warriors is a fun throwback to a simpler time, but the bonuses don’t make it a top five beat-em-up.

This review is based on a Nintendo Switch download code provided by the publisher. The Ninja Saviors: Return of the Warriors is available now. The game has been rated T for Teen by the ESRB.