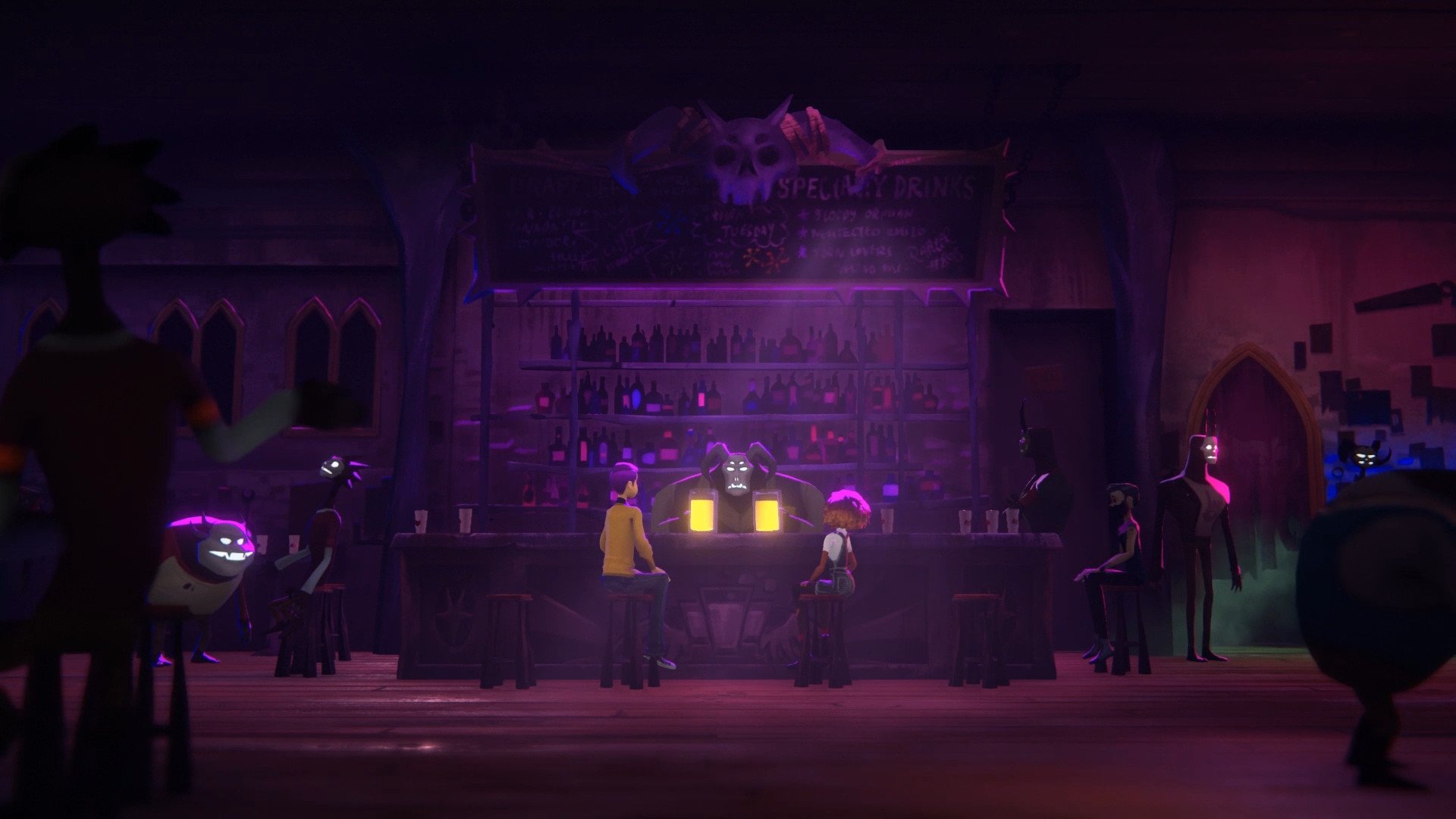 You would think that if you died and went to Hell that would basically be it for you in terms of a lot of things. You’d have to find a way to resign yourself to an eternity of unimaginable torture for starters, but you’d also be done with moral quandaries or questioning the ethics of your motives and goals, right? Well, if the world of the damned is anything like the one concocted by the team at Night School Studios in the upcoming Afterparty you may be in for a few surprises.

Night Schools version of hell definitely seems to fit the biblical script during the day, when lost souls are tortured in creative and painful ways. The night, however, belongs to the party. Everyone, demon and human alike clocks out and heads to their favorite local watering hole to blow off some steam with some cocktails and maybe some karaoke. And every night the big dog himself, Satan throws a rager of his own at his palatial estate. As an added bonus, anyone who can out-party and outdrink the prince of darkness can win back their lives on Earth, before it all went to Hell literally.

Cue the entry of our two heroes, Milo and Lola, if they can be called that, I mean they are in Hell after all. But, if there were ever a time to arrive late it would be your first day in Hades. The two BFFs show up just a bit before closing time and their processing doesn’t get finished. Now, they’ve got one night to try and save their souls from suffering for an eternity.

Players who spent time with Oxenfree will be familiar with the game’s narrative-driven structure and branching dialog paths. Afterparty is set up with some similar mechanics, but it’s also got a few mini-games like beer pong. Players will also find themselves in adult situations where they may have the option to imbibe adult libations that can unlock new dialog options. For instance, a drink may make you sassier, or make you more hard-headed, much like in real life. The drinks players choose could help them unlock new information in conversations if used properly.

Milo and Lola don’t really seem like big-time party fun kids to me, and part of their new post-life existence is a lack of knowledge of how they died or what landed them in the bad place. But, they are determined to get out of hell. As the game progresses and they face new challenges their relationship will be put to the test and their morals will be tested in unexpected ways. For instance, during my hands-on time with an Xbox One build of Afterparty I had to find a human that had snuck into Hell without going through the proper process of dying first.

After interrogating several humans at a bar I thought I’d found my suspect only to find out she had stabbed her brother to death when they were both young children. I ended up giving her Milo’s phone number too. I eventually did find the right person and ratted them out to the authorities, but then I got a visit from my inner demon who informed me that while I had picked the right suspect, they would never go onto do anything wonderful back on Earth like cure cancer or save the whales. And that’s where I think the real meat and potatoes of Afterparty are going to be found. Would it have been better to just accuse someone who was already damned? Is it still better to have someone pay for their own transgressions even at the detriment of all of mankind? And this is just at the beginning of the game. How much further are players going to have to push Milo and Lola to get back their lives?

There was also an option to go have a drink with a woman instead of hunting down the sneaky devil who’d made their way into the afterlife. The characters in the game kept telling me it couldn’t be as easy as that, just having a drink. But could it have been that easy? With so many decisions to be made and paths to take I’m already pondering my next playthrough of just the first hour or so of the game.

Along with a great narrative presence that’s chock full of pop-culture goodness and moral quandaries, the art direction is solid and manages to be vibrant despite being a realm of tortured souls. Human characters have a very classic look with beady little Barney Rubble eyes and designs that hearken back to the heyday of Hannah Barbera. The demonic designs give off a real Disney’s Gargoyles vibe with a lot of inner glow that accents the darker tones of the creatures’ skin well.

Afterparty definitely seems like a good move for Night School’s next big project. It combines a lot of Oxenfree’s strengths with its own original storyline that isn’t afraid to be its own thing. After playing through the first hour or so of Afterparty, I’m ready to sell my soul to get my hands on the rest. Fortunately, such drastic actions probably aren’t necessary since the game is set to launch on October 29 on the Xbox One (and will be available immediately at launch for Xbox Games Pass subscribers), PS4, and PC.