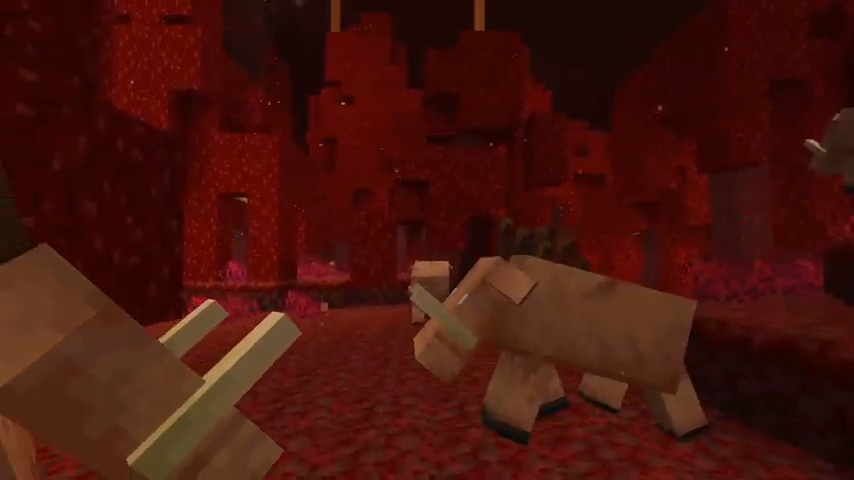 For as much as Microsoft and Mojang like to experiment with offshoots of the Minecraft franchise, the base game continues to be bigger than ever before. Now Minecraft is set to get its next major content update, announcing it during Saturday's MINECON Live opening keynote. This is the Nether Update, which is set to introduce new biomes, new mobs, and other new features.

The next part of Minecraft to be updated is... The Nether! This scary place is about to become a lot more engaging! Explore brand new biomes like Soulsand Valley and Netherwart Forest, new mobs, trading (well, sort of) and more!

For years, the zombie pigmen have been a plague upon Minecraft, spawning frequently in the Nether and occasionally from lightning strikes. But where did they originally come from? To offer a sort of missing link, the Nether Update is introducing a new Nether race called the Piglins. This is a new civilization that's all about gold. They won't cause you any trouble, unless you try and open a chest, at which point they'll attack. You can try and calm them down through a new bartering system, which is more Piglin-style trading, as opposed to the traditional villager trading.

The hostile Piglin Beast roams the Netherwart Forest and seems to be in dire need of anger management. It’s also in need of a new name! Got an idea? Submit your suggestions at https://t.co/Dr7mR7hyB2. pic.twitter.com/3zsHhdqr1f

You may also recall that Minecraft recently introduced beehives, as well as bees, into the Minecraft Snapshot.

Now bees and their hives are preparing to make their way into the full Minecraft game proper. The bees will help players pollinate their crops and flowers, acting as a neutral mob along the way. One would expect bees would be tiny, but they'll actually be the size of half a block, so they're pretty sizable. During Saturday's MINECON Live keynote, players were also introduced to the new Honey Block. The Honey Block can be used as a collectible resource, able to act as a building resource and as a recipe ingredient. Just be careful, because it's sticky.

Players were also introduced to the Target Block, a special block that can trigger various actions depending on how close a player can stick an arrow near the center. The Minecraft developers are noting that players can use Target Blocks to practice their accuracy, to create mini-games, or even create secret triggers to open their bases.

The MINECON Live keynote offered a chance for Minecraft players to vote on which biomes Mojang will update next. But just as voting on the Swamp, Mountains, and Badlands was coming to a close, the developer unveiled two new biomes as part of the Nether Update. The Soulsand Valley and Netherwart Forest will join the game as two brand new Nether biomes, each filled with their own resources and their own dangers. The Soulsand Valley is a desolate underground area, with only blue fire available to light the way forward through the intense blue fog. The Netherwart Forest is a red forest surrounded by lava waterfalls, in which plantlife can theoretically thrive to the point that players can get lost in its density.

The Nether Update is coming soon to all versions of Minecraft.