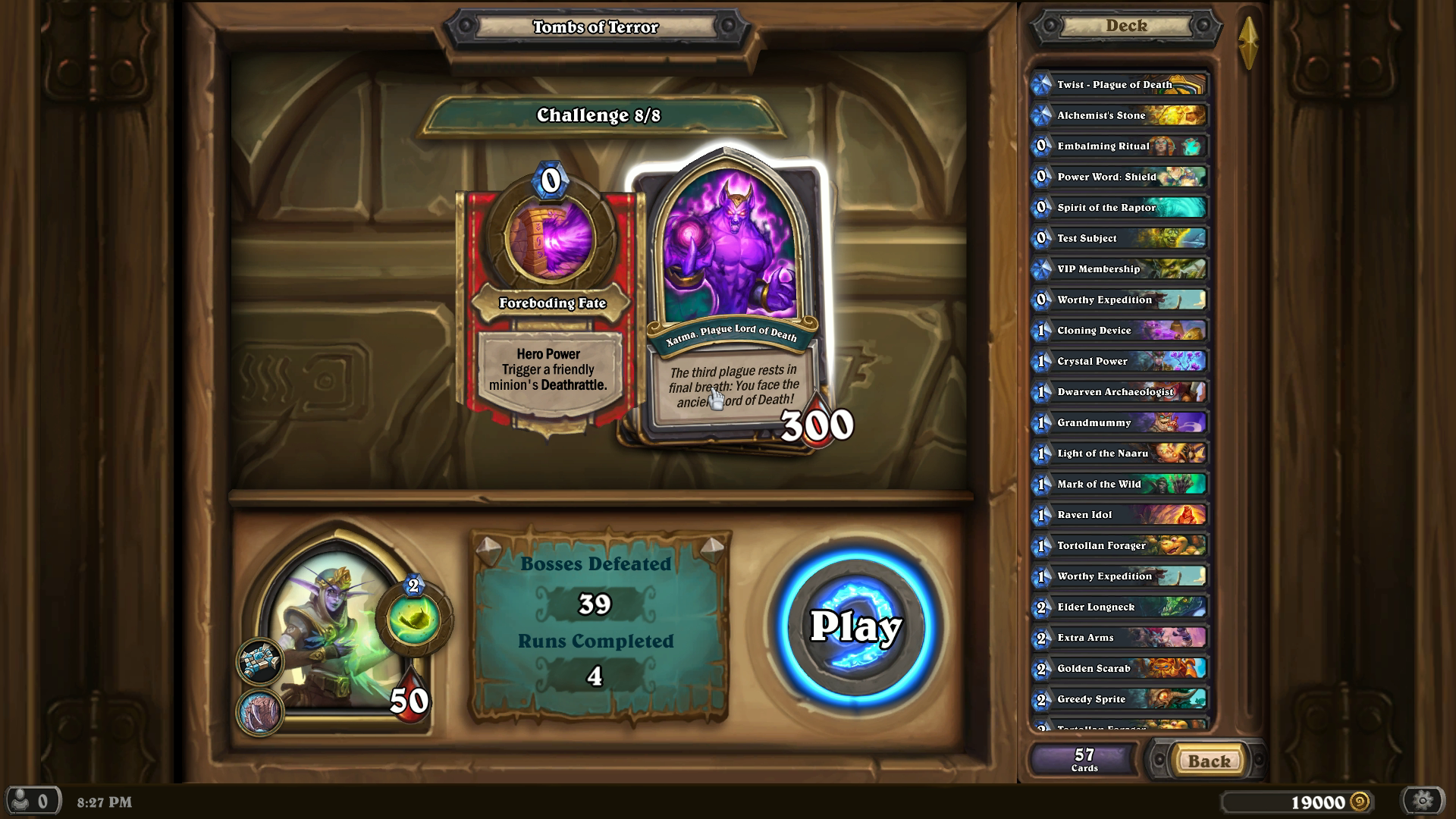 How to beat Xatma, Plague Lord of Death - Hearthstone

The League of E.V.I.L. mysterious plan in the deserts of Uldum move into its second week. What they're ultimately after is unknown, but it involves unleashing the four Plague Lords of Uldum. Only the League of Explorers can stand up to them, but the Plague Lords will not go down easy, especially this week's. That makes them one of the the biggest challenges to date for anyone who has played through Hearthstone's single-player adventures.

How to beat Xatma, Plague Lord of Death - Hearthstone

I'm not going to sugarcoat this. This will probably be the hardest challenge that faces you in the Tombs of Terror. Even on Normal, Xatma is hard! A lot of that is because of this opening Hero Power, which doesn't pull any puches out of the gate.

Elise's Druid and Priest cards can prove to be a big help, especially if you can recruit Legendaries like N'Zoth, the Corruptor. The problem is, she doesn't really have any board clears and Xatma's board will get out of control fast. If you don't have a board clear and he's allowed to keep triggering his own Deathrattle effects, you're going to lose quickly. Consider using Reno for this fight instead.

Be careful, because Xatma has a Shifting Shade and he'll use it to copy many of your cards, so don't let him copy one of your heavy hitters. Likewise, deal with Sylvanas Windrunner immediately or else he'll keep helping himself to your minions.

The most important piece of advice is to stay on the offense. DO NOT attempt to play the control game, because Xatma's army is far too great in numbers. You can keep wiping the board for 15 to 20 minutes before you realize that you haven't attacked Xatma's face at all and before you know it, your deck will nearly be on empty.

Getting through this first phase is critical, so charge up Reno's Gatling Wand if you have it and use it when it builds up enough power. Don't waste time here. You're on the clock, especially if you give Xatma a chance to play Hakkar, the Soulflayer.

PHASE 2
Death's Embrace
Passive Hero Power
The first minion for each player that dies in a turn has Reborn.

Now that you've gotten through that bear of a first phase, things start to settle down a little bit. But it's not getting easier. If you've filled up your side of the board, say goodbye to it. Xatma will draw Plague of Death and immediately wipe it out. But do note that one of your minions will come back with one Health, thanks to Xatma's new Hero Power.

Death's Embrace can be a daunting Hero Power, but just know that it will also benefit you. Use Rush minions to take advantage of this and give them Reborn. Use them to take out multiple minions at once. If you picked the treasure that gives all of your minions Rush, that's even better.

You'll need your control options at the ready, because Xatma will also add an N'Zoth, the Corruptor with his second batch of cards. If you've somehow haven't died by this point, this will probably finish you off. If you're coming back for a fresh battle, his N'Zoth will take a while to warm up, but Xatma will have plenty of Deathrattle minions to throw on the board, include multiple copies of Sylvanas Windrunner and another Hakkar, the Soulflayer. If your goal is to control the board, be cautious about what you kill first, because the first minion killed will come back with Reborn.

The best advice to offer here is to pour the pressure on with heavy minions. If you're using Reno, use freeze spells to keep his more brutal options, like Sylvanas, from attacking. This isn't as tough as the first phase, but with Xatma's Legendaries, this can get very hairy.

PHASE 3
(1) Death's Gaze
Hero Power
Deal 1 damage to all minions. If any die, add an Untimely Demise to your hand.

PHASE 3 (Heroic)
(0) Death's Gaze
Hero Power
Deal 1 damage to all minions. If any die, add an Untimely Demise to your hand.

Last, but certainly not least, Xatma will do one damage to all minions with his new Hero Power, including his own. Death's Gaze will ultimately work to his advantage, though, because if any minions die, he'll get a 3-Cost Untimely Demise spell, which will deal three damage to all of your minions and your own face.

The positive is that Untimely Demise is a mana-intensive resource, even if Xatma's Hero Power gets discounted to zero in Heroic. So he won't really be able to play his higher-cost cards and Untimely Demise in the same turn.

If you can believe it, Xatma will have even more copies of Sylvanas Windrunner at the ready. But if you have heavy board pressure and freeze spells at the ready, he won't be able to take advantage of it. One minion you will have to watch out for is Mal'Ganis, which will make Xatma immune. Clear it out as soon as possible and keep the offense rolling.

Beware of the Plague of Death spell, which can clear the board in one swing. Other than that, be aggressive and hit Xatma hard before he can hit you. Again, this battle is very hard. If he throws down Hakkar in Phase 1 and activates his Deathrattle, it will be virtually impossible to take him down in one go. Regroup if you have to and don't give up.

How to download the Outriders demo on PC, Xbox, and PlayStation