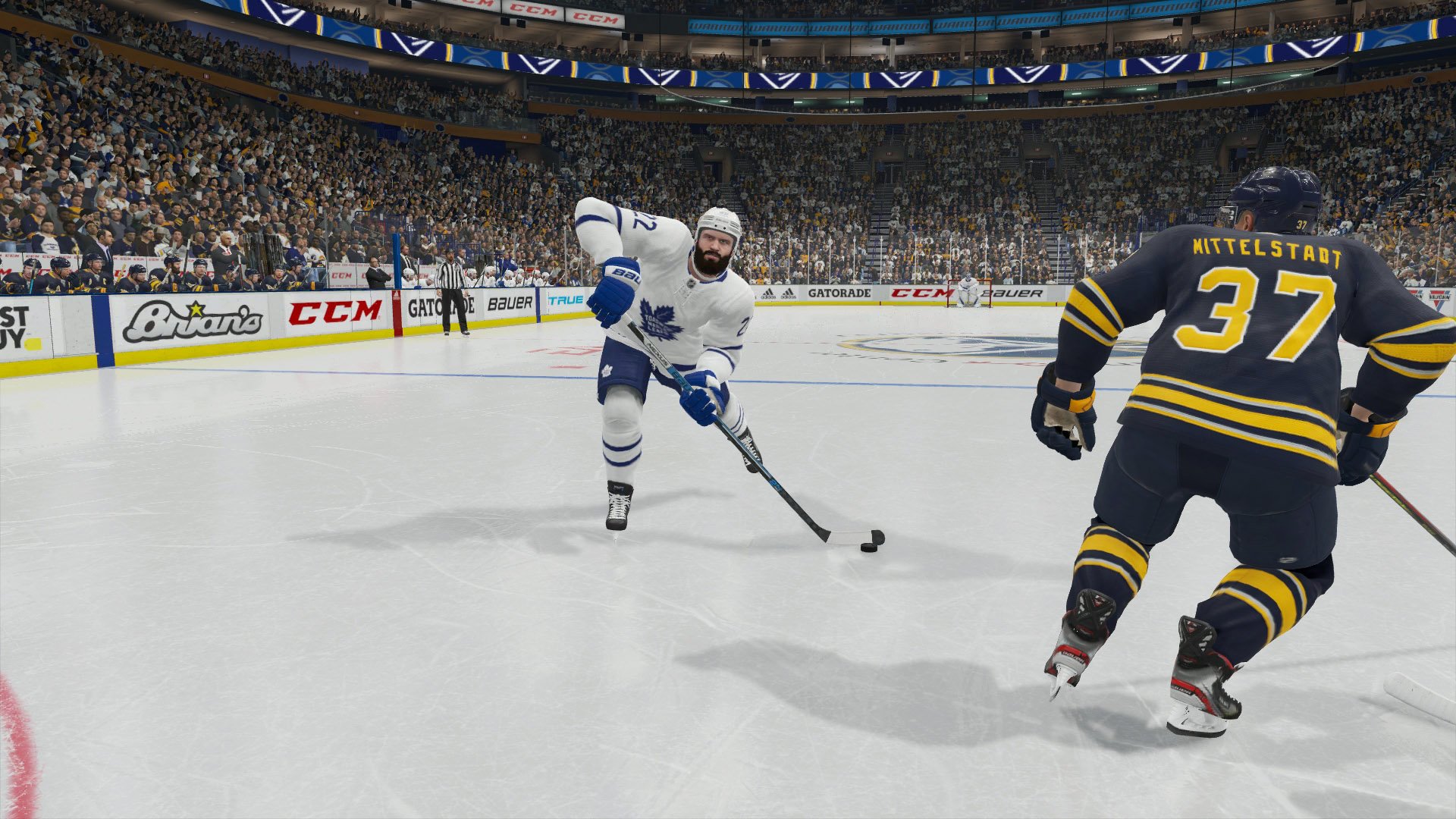 NHL 20 review: One win away

When the St. Louis Blues defeated the Boston Bruins for the Stanley Cup in Game 7 last season, the Bruins ensured their year would be forever summed up with the phrase, “One win away.” It’s a tough spot because Game 7 of the Stanley Cup Finals means a team has had an incredible season, but the glory they worked so hard for was just out of reach. With NHL 20, the team at EA Canada has put forth one of the best video game hockey experiences ever made, but it falls short of what could have been near perfection.

EA Canada’s big sell on NHL 20 prior to its release was mostly centered on gameplay, with overhauls to both shooting and goaltender intelligence, each of which are wrapped up in the new broadcast package that has been badly needed for a few years.

While NHL 20 sees the addition of Ones Eliminator in the World of Chel as a game mode, which is basically just a battle royale for hockey, most of the modes in NHL 20 are returning veterans, and players will find Hockey Ultimate Team, EASHL, Threes, Online Versus, Be a Pro, and Franchise mode just to name a few. Seriously, that’s just a few, as NHL 20 includes more than 14 game modes tucked away in its online and offline offerings. While there are a few tweaks here and there to some of the returning modes, they are mostly the same as what was offered in NHL 19.

There is no way to downplay the significance of EA Canada’s overhaul to shooting and goalie intelligence. When playing offline in modes like Be a Pro or Franchise, they completely change the game and have me thinking about how much I want to play hockey even as I sit here writing about it.

Past years of this franchise have seen offline play dictated by a formula. There were ways to score and we all took advantage of that. There were ways to play defense and it led to many shutouts. Players knew that if they took a shot on goal, it either went in or was almost certainly going to be swallowed by the goaltender and play would be stopped. You had to make it count. It was mind-numbingly repetitive.

With the additions of the new shot animations and new goalie intelligence (which also includes new goalie animations), play seems refreshed and more organic than it’s ever been. Pucks bounce now, so whereas taking a shot in NHL 19 meant a whistle, taking a shot in NHL 20 could bounce around, like real pucks do, and create absolute chaos. This leads to frantic play and garbage goals but that’s what real hockey is like. Seeing Auston Matthews pull the puck into his feet to change the angle and firing a wicked wrister is very cool, just as it’s refreshing to see Carey Price shrug his shoulder to react to a puck he can’t easily control, causing it to careen over the net or into the corner. Last year, that would have been a boring animation wrist shot that either went in or was snagged with a glove, causing play to almost certainly stop.

I’ve been dumping on Mike “Doc” Emrick for a couple years now for the commentary in the NHL franchise. Last season, though, I watched an actual game with Doc on play-by-play, and it was good. It was then I realized that the broadcast package in the NHL series over the last few years was simply stale and not up to present-day standards. Applying pre-recorded commentary over unpredictable gameplay must be a nightmare but, holy cow, do James Cybulski and Ray Ferraro ever do an incredible job.

I’m not overly familiar with James Cybulski’s actual commentary work, but he’s good in NHL 20. He has an urgency to his voice which can sometimes feel just slightly out of place, but the accuracy of what’s being said in relation to the ongoing play feels better than past iterations of the NHL series. Ferraro, on the other hand, is as good as ever, which is partly due to the fact he’s the color commentator and his contributions are often more about storytelling. Not to take away from the fact he is just one of the best in the business, because he is.

The presentation in NHL 20 is rounded out by new visuals, including an in-game overlay and instant replay overhaul, all of which is branded as EA instead of the NBC stuff we’re used to. I’m digging the in-game overlay, which now sits at the bottom of the screen and is less in the way. The star, though, is in the instant replay changes, which now seem to focus more on a complete recap of the play as it shows the goal from multiple angles, and then seamlessly follows through to the player beginning their celebration. It feels like a bigger deal when scoring, which is refreshing.

NHL 20 isn’t without its problems, and most of those are directly related to online play, and specifically the inability to fix an awful gameplay meta. There’s also the blunt reality that there are too many game modes in NHL 20, which means a few are near copy pastes from previous years.

The idea behind Ones Eliminator is amazing. A total of 81 players enter a tournament and break off into groups of three, resulting in 27 individual games. The winners move on and the losers head back to the queue to find a new tournament. Eventually, there is only one remaining, the hockey battle royale winner. Along the way, players rank up, allowing them to customize their skater with new cosmetics and even a few skills.

The problem is, the new shot animations and goalie intelligence improvements don’t address the elephant in the arena: cheese goals. They are still there, and they are the same as they were a year ago, and the year before that, in offline and online modes. The catch is, I can choose not to use them when playing offline, so it’s a non-issue. Online, however, players cannot be trusted to value great gameplay over being the winner.

The result of this must-win mentality online is that almost every game ends up being a battle of trying to prevent players from applying the formula they perfected years ago. Skate out from the corner and exploit the slow lateral movement of the goalie, or hit that sweet spot just above the slot and snipe from an angle that you first perfected in NHL 15, or was it even before then? It’s old, it’s boring, and I can’t see myself playing another game of Ones Eliminator without significant gameplay changes.

It’s a shame this problem isn’t limited to Ones. All online modes are still weak to the potential spam fest of cheese moves and goals. I really hoped that the gameplay improvements in shooting and goaltenders would fix this, but it simply has not. As someone who is here for the experience, not the win, I have no patience for that. I refuse to turn my online experience into spamming the formula to prevent or score cheese goals. Give me an authentic experience, or I’ll simply avoid playing online.

My beefs with NHL 20 (I reserve the right to develop more after another 100 hours), are rounded out by the menus. The menus are bad. It’s not rare to click through seven or eight menu subfolders to apply a cosmetic, and then click back seven or eight times. Have you ever seen a cat crawl into a space it shouldn’t, then awkwardly shimmy back out butt first? It’s painful to watch, and in NHL 20, you’re the cat.

Deep into the playoffs

It’s a real shame that NHL 20 has such a glaring problem with its online gameplay, which is particularly evident in Ones Eliminator. However, the beauty of NHL 20 is that the gameplay changes to shooting and goaltending aren’t just marketing strategies, they are real improvements that players will see and enjoy. They aren’t enough to keep me invested in the online modes, but they have me eager to play through my Be a Pro (which desperately needs to allow players to continue save files from previous years), and I’m always down to manage a team in Franchise mode. When you add in the brand-new broadcast package, you end up with me, a guy who has played video game hockey since NHL 93, as excited for this year as any year in the last 20.

It’s hard to win in the NHL. Some of the most dominant teams in history fall short of the Stanley Cup. The best you can do is get better every year and hope that one of these seasons will be the one you get to hoist the most iconic trophy in professional sports. EA Canada took NHL 20 all the way to Game 7 of the Stanley Cup Finals this year but fell just shy of the perfect season. Unlike the Boston Bruins, though, there is no reason for EA Canada to mope. NHL 20 is close to the best video game hockey experience ever made, and that should be celebrated.

This review is based on a PS4 download code provided by the publisher. NHL 20 is available in retail and digital stores now.