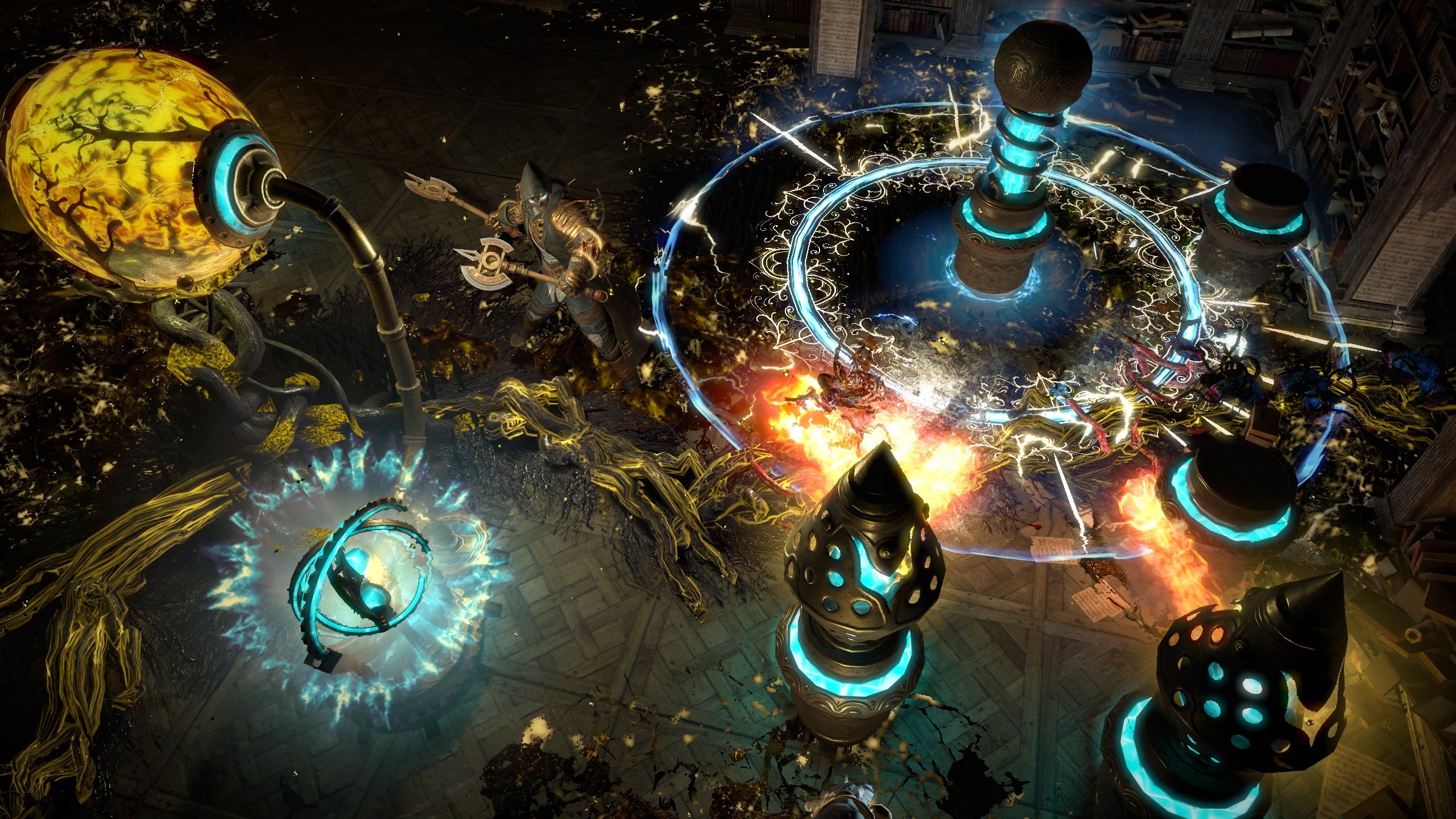 The damned continent of Wraeclast has been home to monsters, undead creatures, and foes of unfathomable magical power. Now what happens when the continent is covered with deadly fungus? As Path of Exile's player base continues to grow across a number of regions on several platforms, Grinding Gear Games now prepares to jump into the game's upcoming 3.8.0 update called Blight.

Path of Exile: Blight introduces the game's next three-month challenge league. The idea is that Wraeclast has become overcome by massive fungal growths. This will introduce a new wrinkle to the game's usual dungeon crawling and treasure hunting: tower defense. But even with this new gameplay element added in, this challenge league will remain fresh and accessible to players looking to jump on the Path of Exile train for the first time.

Players will meet a new NPC character named Sister Cassia. She'll inform players about a wave of fungal growths that have enveloped the island of Wraeclast. These growths can control the minds of nearby monsters, so Cassia calls upon players to destroy them. She has a device that can help, but it needs time in order to drain the ichor from the growths. While the device is running, players are tasked from protecting it from waves of incoming monsters.

Whenever players attempt to attack the fungal growths, they'll defend themselves by summoning monsters. The monsters will flow down the growth's tendrils in a set pattern. On top of using their own abilities, players can set up defenses across a number of tendril lanes connected to the fungal growth. Different towers can aim for different monster weaknesses, so players will need to be wary of what types of monsters are attacking and how to stop those specific waves. The tougher the growth, the more tendrils it will have. Endgame maps will include Blight encounters that pack up to 24 different tendrils.

You won't find many Blight encounters over the course of your game. Grinding Gear CEO Chris Wilson notes that players will only find one of these encounters for each map. They'll mostly be micro encounters, enough to offer a diversion, but not disrupt the normal Path of Exile experience. But while these battles are short, they'll be plenty rewardings, as players can earn new items to help bolster their inventory.

Having said that, players can pick up Oils from Blight encounters, which can be used to anoint Rings or Amulets. Different Oil combinations will offer different enchantments, with 12 tiers of Oil rarities available. Cassia can combine two Oils to anoint a Ring, which can modify tower functionality. She can also combine three Oils to anoint an Amulet, which can offer a notable passive skill on the passive skill tree. The addition of Oils allows players to access passive skills from parts of the skill tree that might be far away from what's available in their character build.

If you're looking to take your Blight encounters to the next level, you can find Blighted Maps near the Blight league's endgame. These Blighted Maps can be used like any regular map item, but that area will have all of its regular monsters removed and instead be replaced by one giant Blight encounter. It's incredibly difficult, but if you can succeed here, there are great rewards that await.

Beyond the Blight encounters, players will also find plenty of other additions to the main Path of Exile experience. Ten new unique items will be available this expansion. One example revealed is the Triad Grip, which fits the Necromancer build by converting minion physical damage to different elemental damage, depending on the colored sockets it contains. Alongside new unique items, a few dozen existing unique items are being rebalanced. Six of those items will get "significant overhauls," with Grinding Gear set to reveal more information on those in the weeks ahead.

Players can expect a few class revamps. The Witch's Necromancer Ascendancy class is one archetype that's getting a significant overhaul. Those adopting this archetype can now direct their minions with three support gems. Any skills supported by those gems will cause those minions to either act act aggressively, defensively, or attack a specific target. As players level up, minion meat shields will be leveled up, which will remove reliance on item buffs. There are also a few new different ways to play Necromancer, with Grinding Gear citing a new Carrion Golem that can buff and be buffed by other minions.

Lastly, there's the Mine Saboteur. With Grinding Gear observing that Mine Saboteurs have greatly favored traps, the team is looking to add some extra power to their mines. Mines can now be thrown at range and deployed faster, detonating in sequence. If you can detonate a long string of mines and defeat multiple foes, you'll pick up greater rewards for your efforts. Mine Saboteurs can expect three new mine skills, including a new Stormblast Mine that makes nearby enemies vulnerable to damage, with increasingly more powerful shockwaves when multiple Stormblast Mines are detonated in sequence.

After a few months of running the Atlas of Worlds endgame, Grinding Gear noticed an issue pop up where any of the five Masters can pop up at any time. They'll often show up at inconvenient moments, derailing a player's momentum with a lengthy side mission. In an effort to curb some of these issues, players can now defer Master encounters and get to them at their earliest convenience. Players can also hand them whatever map they'd like to apply their mission to, rather than leave it up to random chance.

As for the central Path of Exile game as a whole, players can expect to see Legion and Synthesis content integrated into the core game. Legion encounters are now being added to a number of old leagues, as well as various endgame maps. Meanwhile, the team noticed that while the memory-chaining elements of Synthesis didn't prove so popular, the boss battles did. With that said, players can now find random bosses from the Synthesis update available in unique maps handed out by Zana.

Blight is one of the bigger updates to hit Path of Exile, but the game's biggest update is yet to come. Look for more information on both December's 3.9.0 update, as well as 2020's massive 4.0.0 expansion, to be revealed during the very first ExileCon in New Zealand. The event will kick off with a keynote and the timing of both the keynote and the convention itself is not lost on Wilson. The Grinding Gear CEO is well aware that ExileCon is being held just days after BlizzCon, so the team will be watching Blizzard's big keynote to take the temperature of rabid Diablo fans. Wilson adds that depending on what Blizzard offers their Diablo fanbase, it could either add to or lessen anticipation for what Path of Exile will have to offer. Regardless, there's a lot on the line for Grinding Gear and the smaller development team is admittedly feeling nervous.

As the countdown to ExileCon rolls on, Path of Exile players can look forward to Blight arriving next month. Look for the 3.8.0 update to hit PC on September 6, while PlayStation 4 and Xbox One users get it on September 9.