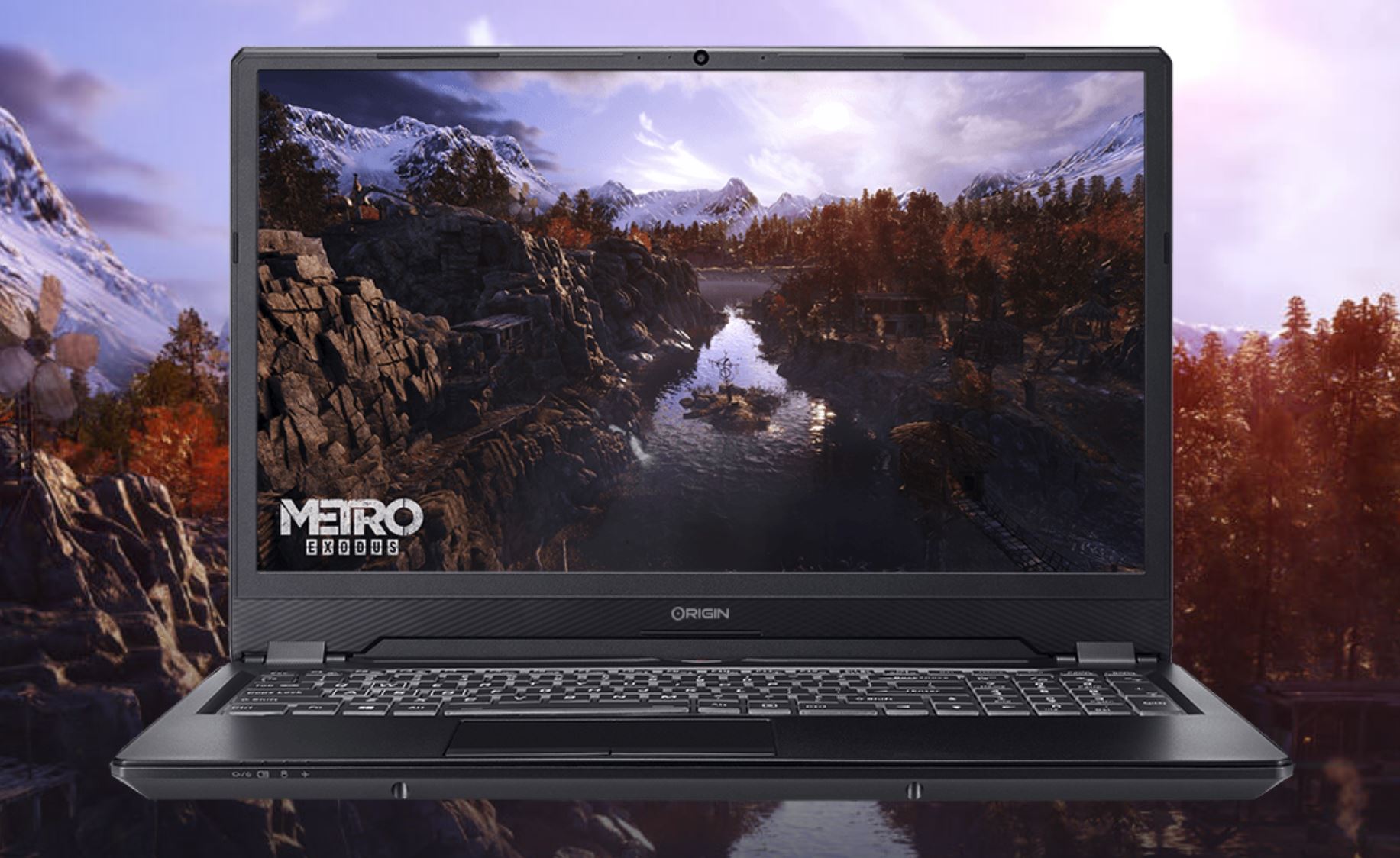 Origin PC EVO16-S laptop review: Is Max-Q right for you?

Origin PC’s promotional page for the EVO16-S laptop promises enthusiast-level gaming performance in a lightweight package. While most high-end gaming laptops sacrifice portability in the name of raw performance, the EVO16-S aims to strike a balance so that users don’t need to feel like a pack mule to be able to bring their games along for the ride. It proves to be quite the workhorse when pushed and is only a few nitpicks away from being the perfect choice for all users.

The EVO16-S unit that was shipped to me from Origin PC was configured with a mix of components that aimed to balance the difference between including the kitchen sink and affordability. No serious gaming laptop can ever be considered cheap, but attempting to include every feature and part under the sun can quickly lead to sticker shock. The model I received can be ordered from the company’s website for less than $2800 as configured.

Specifications for the EVO16-S as reviewed:

Custom artwork on the outer panel

When first glancing at the component list, the GeForce RTX 2080 Max-Q jumps out at you. It is currently the best mobile gaming GPU you can purchase today and offers lots of grunt without needing excessive amounts of space for cooling. The EVO16-S is less than 20mm thick, despite carrying a GPU that can trade blows with some of its desktop-class counterparts. Obviously, you shouldn’t expect the RTX 2080 Max-Q to be equal to a full-fat RTX 2080, but the tradeoff to achieve such portability is worth it in my opinion.

I ran the EVO16-S through some benchmarks to get an idea of what kind of gaming experience is possible in a laptop that is as compact as its ultrabook counterparts without discrete GPUs. I chose Forza Horizon 4 due to its position as one of the most well-optimized games on PC, its breathtaking visuals, and its dedicated benchmarking tool. I also let the EVO16-S run through Metro Exodus to get a handle on RTX acceleration as well as a general torture test. Metro Exodus can be configured to inflict pain on modern PC hardware while still offering good scaling as you provide it with more horsepower. It also helps that it looks amazing and has a comprehensive benchmarking tool included. I should note that the Metro benchmark is well-known to be demonstrably more demanding than the actual game itself, so take this into account.

I ran all tests at 1920x1080 as it is the native resolution of the laptop. In all tests, V-Sync or framerate caps of any kind are disabled. The setting uses are listed in the screenshots below.

For Forza Horizon 4, the EVO16-S is capable of providing performance in excess of 100fps, even when using the “Ultra” preset. Using an external 1440p display is also a possibility with this game, as the 2080 Max-Q can deliver a rock-solid 60fps or more with the same maxed settings. 4K is possible if you are willing to lower some of the graphical options and enable the game’s Dynamic Optimization, which will adjust settings and overall resolution on the fly in order to maintain a target framerate (60fps in this case).

Metro Exodus proves to be a much tougher opponent for the 2080 Max-Q, with the GPU failing to maintain a smooth 60fps output when the game is pushed to its limits. On the other hand, a stable 60fps is well within reach if the settings are adjusted to the “High” preset. This preset still offers image quality superior to that found on consoles and the differences between it and “Ultra” will be tough to spot in motion on the 16.1” display of the EVO16-S. Ultimately, you still get an experience superior to the Xbox One X by all measures.

Enabling the RTX-powered global illumination and NVIDIA Hairworks changes things, but not as much as you’d think. Enabling RTX and NVIDIA Hairworks effects only drop performance to the 50fps range at 1080p. NVIDIA’s DLSS technology is not available in Metro Exodus at 1080p, so the performance gains available for 1440p and 4K users are a no-go for this laptop. On the other hand, Metro Exodus is arguably the best-looking game around and when paired with its RTX global illumination, is the only game available offering a glimpse of truly next-generation graphics.

When judging the 2080 Max-Q against desktop-class components that have no space or thermal constraints, the product numbers don’t exactly line up. With the benefit of not having to live inside as sub-20mm enclosure with a full-size monitor, CPU, drives, and other hardware, the desktop parts are able to perform at a higher level. Across most games, expect the RTX 2080 Max-Q to land in the neighborhood between the GTX 1070 Ti and the RTX 2060, with performance favoring the latter in DirectX12 games.

Upon removing the EVO16-S from its wooden delivery crate, I opened the lid and powered up the machine. The standby battery performance appears to be exceptional, as it still had the majority of its battery remaining despite being off a charger for weeks. I was able to download and install games and apps for testing and surf Youtube for a few hours before I plugged the laptop into the wall the first time. Everyday desktop use with the unit is snappy thanks to the 6-core CPU and NVME SSD drive that holds the OS and mission-critical apps. I ran some streaming tests via OBS and found the EVO16-S capable of capturing and encoding a respectable 720p60fps stream while pushing Forza Horizon 4 to a solid 60fps simultaneously.

The unit comes equipped with an RGB-backlit membrane keyboard. By holding the FN+/ keys, the RGB customization screen appears and allows for a wide range of lighting customization. Several eye-catching presets are available, as well as the ability to assign custom colors to every single key on the board. My personal preference is to run with a white backlight, though I noticed that the color ended up being a mix of pink and off-white hues. Not a game-breaker by any means, but something that can be improved in the future. I really liked the large, legible font used on the plastic keycaps. The lights clearly shine through them and make it easy to use in darker rooms or outside in the evening.

It has a pair of speakers that fire outwards from the sides of the keyboard. I cannot be too harsh on them for being laptop speakers, but users should not expect miracles. The frequency response is poor and the overall presentation lacks impact. I did find that the placement of the drivers offered much better imaging that I’m used to from built-in laptop speakers. It is not hard to get your ears into the sweet spot and get an enjoyable stereo image from your music, so thumbs up to Origin PC for that. The headphone output is solid. If you have a quality pair of cans that don’t need loads of power, the EVO16-S can deliver enjoyable music playback and excellent positional audio for gaming.

How about that display?

The display on the EVO16-S offers a colorful, sharp presentation, even at 1080p. It is advertised as an IPS-Type panel and seems to share the strengths and weaknesses of other panels of the same type. Viewing angles are very good, allowing a vibrant picture, even when the screen is tilted out of an ideal position. Colors pop and websites are easy to read. During gaming, I noticed no smearing or ghosting as the 144Hz refresh rates kept everything buttery smooth. I couldn’t find a single dead pixel.

Screen uniformity left a bit to be desired, as the picture can look a bit blotchy on a grey test image. Being an IPS panel, the contrast is not as strong as you can find on VA panels and most televisions. Movie buffs may be a bit let down with dark scene performance, but it is more than adequate for YouTube and casual media consumption. As with lots of IPS displays, the panel on this EVO16-S exhibited the dreaded “IPS Glow”, especially from the bottom left corner. It was very noticeable when watching letterboxed content and it often caught my eye during Metro Exodus (a very dark game).

The big takeaway for the EVO16-S is how much juice that Origin PC fit into such a small chassis. Until I picked it up and used it, I had not really grasped how lightweight and easy to carry it really was. NVIDIA’s Max-Q design allows for a big boy GPU to live inside a legitimate ultrabook frame and the unit as a whole doesn’t really offer any serious compromise. When pushed, it gets warm, but I never felt like it was slow-roasting my thighs. It was easy to fiddle with when laying on the couch next to me thanks to the wide viewing angles on the display. The onboard connectors made it easy to pair with my 4K TV.

Unlike some of the nearly 10lb gaming laptop behemoths you can buy, the EVO16-S is portable enough that you’ll end up carrying it from room to room without thinking about it. It’s not simply a laptop you move from dock to dock or desk to desk. You’ll pay for the convenience, but it is worth it. Additionally, you get Origin PC support, which I have made use of recently on a different machine. The person who answers the phone in the evening is the person who solves your problem, with no hoops to jump through. The EVO16-S is a stellar package for those who need to game on the go and don’t mind paying for a well-thought-out design and unmatched support.

As a bonus for Shacknews readers, the folks at Origin PC are offering a special discount on the EVO16-S. Enter the code SHACKNEWSEVO16S19 during checkout to get $100 off.

This EVO16-S review is based on hardware loaned to the reviewer by the vendor. It sells for $2851 as reviewed and can be purchased directly from Origin PC.