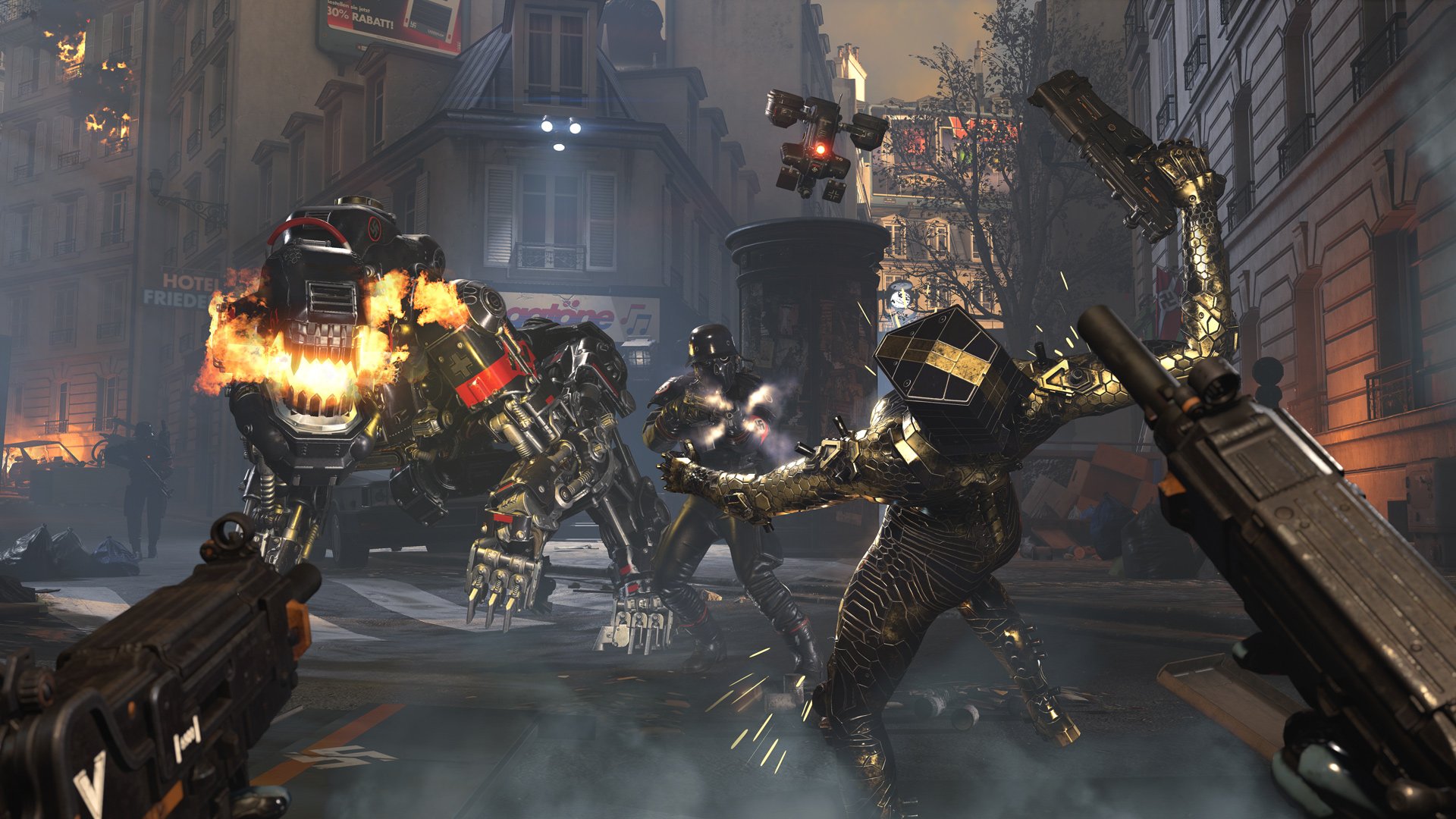 Wolfenstein: Youngblood is a spin-off to the main series of Wolfenstein games which saw its own reboot in 2014. This latest entry is a co-op experience where two players take control BJ Blazkowicz’ daughters, Sophia and Jessica. Developed by MachineGames and Arkane Studios, Wolfenstein: Youngblood tries a few new ideas with this beloved series, but unfortunately the experience is more of a chore than a high-octane Nazi-killing romp through Gay Paree.

The setup to Wolfenstein: Youngblood’s story is a simple one. Nineteen years after the events of New Colossus, BJ Blazkowicz goes missing during a mission into Nazi-occupied Paris. Being the good daughters that they are, Soph and Jess decide to team up with the incorrigible Abby to save their dad. They travel to Paris, join an underground revolution, and start working toward taking down the Brothers, three towers that dominate the Parisian skyline.

As far as the story goes, it’s extremely light compared to the previous entries. There are really only a few cutscenes that setup and cap off the journey, with most of the information coming through voiceovers mid-mission.

Without giving too much away, the story was disappointing in its execution, with the plot points visible from a mile away. Though not all of these games need big moments or twists, Youngblood felt rather void of revelations.

One of the main selling points of Youngblood is its cooperative experience. You can play through the entire campaign with a friend. You and a friend can rally together to take down Nazis and save your dad. What sounds like a great idea has such poor execution and such frustrating implementation that it’s more of a hassle than an enjoyment.

There were problems right from the start. Firstly, my co-op partner’s name either didn’t appear in the friends list or appeared as the wrong name. Not just spelt incorrectly, but actually appeared as someone else on my friends list. Was I going to be inviting my partner to play or sending out a random request to a friend I’d not spoken to in ages?

While a game doesn’t need co-op mechanics to feel good, when co-op mechanics are implemented they need to feel relevant or build on the gameplay. In Youngblood, they feel entirely shoehorned in. Most areas are precipitated by a duo: two keys to open a door, two levers to pull, two handles on a box. All this does is prevent one playing from zooming ahead of the other. They’re not great moments of cooperation, they’re moments where one player says, “I’m waiting for you.”

This is frustrating for more than just the slowdown to gameplay. It’s frustrating because at no other time does it feel as if you’re really cooperating with your teammate. In Army of Two, a delightfully average game from a decade ago, there are moments where you come together with your friend and spin around shooting in a ballet of bullets. In Youngblood, there’s zero meaningful interaction between the two girls during combat.

The only exception to this being things called Pep abilities. These abilities can be swapped out and do things like refill health and shield or double damage output. But you need to be right next to your partner to activate it and most of the time you’re activating it because you need it yourself. So you’ll spend a few dizzying seconds trying to find your partner in the cacophony of bullets so you can run over, press the button, and heal yourself.

One of the most frustrating “co-op” experiences in the game would be the elevators in the Brothers. Both players are needed to open the elevator doors. The doors need to be opened to enter the elevators and to exit them. You must ride the elevators up, and then back down. This is for each of the three towers, which means opening up the same set of doors 12 times.

To make matters worse, if you’re the second to the door, you need to be in just the right spot to hit the interact point. It’s just so needlessly time-consuming. To cap it all off, there’s a loading screen during each elevator ride. It’s one of the worst elevator designs I’ve ever experience in a game. Definitely top 10 worst elevator sequences in video games.

Solo players shouldn’t feel left out though, as they can experience simulated co-op with an AI-controlled character. There’s just one thing, you share lives with the AI counterpart. If they die, you lose a life. Lose all three lives and you start the section again.

Oh, you were exploring trying to find that collectible? Well Jess just got knocked down and needs your help getting back up. It’s your fault, because you sprinted past enemies instead of clearing them out first.

For a game that touts its co-op experience, there’s really not a lot of valuable co-op moments. What’s most frustrating is that it would have been fine if it could just be a normal co-op experience. The mechanics they put in just do not gel with the action the series is known for.

From the first cutscene, it just looks all wrong. BJ Blazkowicz’ handsome looks have been transformed into a ghoulish mask. The hair and clothing looks particularly awful on nearly all the characters while most of my cutscenes looked to be made using pastels despite running on “High”.  These problems aren’t limited to the cinematics either, they extend well into the game.

While atop one of the towers, I looked out over the streets of Paris expecting to see a spectacular skyline and was instead greeted with the edge of the world. I saw no familiar streets I’d just spent 15 hours running through. It looked like something out of a game from the 2000s.

Even when you’re down in the streets, the environments still feel listless and dull. It’s just concrete walls and paths separated by dark sewers. The only reprieve from this are the Nazi buildings. While obviously a representation of oppression, it just makes for a bland experience. It lacks the variety of the previous titles.

The streets you’ll be fighting through are littered with Nazis to kill. With a handful of weapons to use against them, there’s plenty of fun to be had blowing them to bits. But again, a small change has drawn the attention away from the action.

Enemies now have health bars above their heads. There are also icons in their health bars to show what ammo type works best against them. This small change now means you’ll be more focused on switching to a weapon that matches the preferred ammo type than actually fighting. It just further slows down the pace.

If you can manage to sneak up on an enemy or whittle their health down low, you can perform an assassination. This involves stabbing them with a knife or shooting them with their own gun. Considering this is from the same engine that brought us Doom 2016’s Glory Kills, these finishing moves should feel far more satisfying.

As enemies die, you’ll pick up the ammo they drop. Unfortunately, any ammo or currency in the environment must be manually picked up. The end result is mashing the pick-up button as you try to aim at just the right pixel to get the on-screen prompt. You can’t hold pick-up to get everything nearby. It’s so frustrating, especially as you search for more silver to buy more upgrades.

The upgrades and perks are also a new addition to the series. As you level, you unlock new tiers of perks that improve your health, allow you to dual wield, grant the ability to use and stow heavy weapons, and more. It’s an interesting idea, but by the time you finish the game you won’t have everything unlocked. Sure, you can go back and complete daily and weekly challenges for more XP, but to what end? It’s not as if Youngblood currently has world events or dungeons. There is a glimmer of hope here as there continues to be side quests after completing the game, though they are strikingly similar in design to all the previous missions.

If you want to run through said missions for the XP, you better quell the thought. Each mission often requires you to fast travel between two points using the metro system or the sewer. The metro system can only be accessed when all nearby enemies are dead. Unfortunately, the game can’t seem to decide what this means.

This led to several instances where I wanted to fast travel but was told “Can’t travel with enemies nearby.” I searched the surroundings only to discover no enemies. I walked up some streets into an adjacent block to find a single enemy not even looking for me. Or worse still, I’d enter an entirely new area and activate a whole squad of fresh enemies.

To compound these problems further, there’s no map, just a mini-map. This seems to go against the level design. The levels are large and twisting, which makes it extremely frustrating to be trying to work out which way to go when you’re a mile away from your objective and you only have a dot on your HUD.

The challenge of the world

As mentioned above, Wolfenstein: Youngblood includes daily and weekly challenges. These require you to get headshots with a specific weapon, hunt down a high-tier Nazi, or collect coins. You do this to earn more XP and silver to unlock perks and upgrade your guns. But it makes little sense in a narrative-driven game that’s 15-30 hours long.

In a game like Destiny 2, Sea of Thieves, or the Division 2, it makes perfect sense. You’re going to come back on the 200th hour to get more gear and do other activities. You’re not going to do this in Wolfenstein: Youngblood.

I’ve got to talk about it. Microtransactions. Putting them in a game like Wolfenstein: Youngblood is just odd. While they aren't even remotely necessary (players can use in-game currency to buy items), it's still something that makes me inherently uneasy. Plus, the quality of these cosmetics leaves much to be desired. Truth be told, I didn't even realize there were microtranscations in the game until I went diving into the menus. Even still, offering players the opportunity to buy skins in a game as short as this seems wrong.

Wolfenstein: Youngblood feels like a short co-op experience stretched out over a barebones RPG skeleton. It doesn’t feel comfortable in its own skin. It’s too thin in some parts while being bloated and lumpy in others. Whatever it is, I don’t really want to touch it. Ultimately, it’s just a disappointing sidestep in an otherwise fantastic franchise.