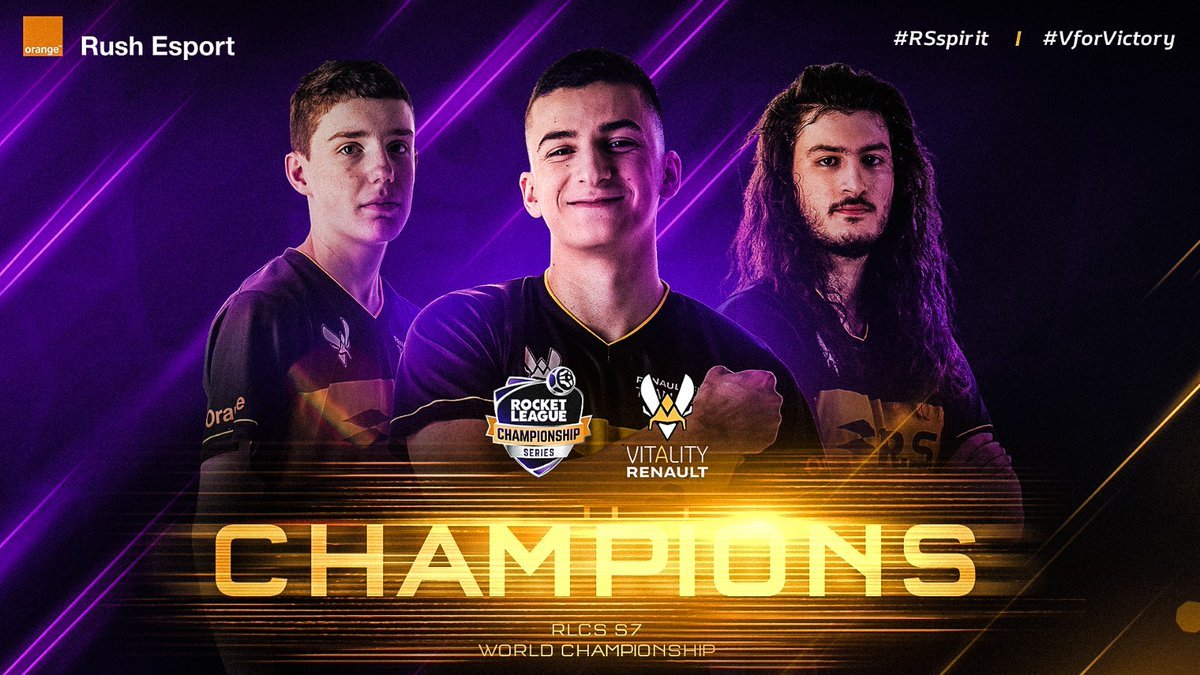 After a full weekend of Rocket League action, a new world champion has been crowned. Some of the faces may be new to this big stage, but the level of play was undeniably at its highest at the Prudential Center in Newark, NJ. In the end, it was Renault Vitality taking a tight five-game series to win the Rocket League Season 7 World Championship over G2 Esports.

The final game saw Vitality respond to G2's Game 5 win early, with Fairy Peak striking at the 19-second mark. Scrub Killa piled on, taking a Kaydop pass and knocking it in at the 2:10 mark to go up 2-0. Sensing defeat at hand, G2 turned up the aggression, but Chicago's shot at the 3:30 mark couldn't find the net. Chicago managed to redeem himself, swooping in at the last second to prevent a Fairy Peak goal that would have put the game out of reach. With momentum swinging their way, Chicago kept it going and scored a final minute goal to put their deficit at one goal. Seconds later, Rizzo capitalized on Fairy Peak's inability to clear the ball out and swooped in to tie the game with just 30 seconds left. That sent the game to Overtime, where Scrub Killa set the table with a demo, while Kaydop lobbed the ball up for Fairy Peak, who knocked in the tournament-winning goal.

G2 set the tone in Game 1 out of the gate, with JKnaps scoring two quick goals to put the team up 2-0. Scrub Killa looked to keep Renault in it with a goal with just a minute to go. Scrub Killa then looked to tie it up, but the shot was blocked right at the goal. G2 looked to keep the ball out of reach and run out the clock, but Scrub Killa struck again and tied it up at triple zeroes. In Overtime, G2 tried to put the game away, but Rizzo hit one right off the crossbar. Ultimately, it was Fairy Peak who took a Kaydop miss and knocked it into the goal to take Game 1 after four minutes of Overtime by a 3-2 score.

Game 2 continued with much of the same intensity, but also with Renault Vitality maintaining its momentum. Scrub Killa knocked in another goal at the two-minute mark to put his team up 1-0. Rizzo wasted no time, responding with a goal of his own just five seconds later. It was the veteran former champion Kaydop who helped keep Vitality ahead, putting them up 2-1, while Fairy Peak guided an off-the-wall bounce into the net for an insurance goal. JKnaps tried to keep G2 in it, knocking in a goal in the final minute, despite Vitality's best efforts to clear the ball out. But Kaydop clinched the game with a final second goal, ending Game 2 with a 4-2 win.

Bad luck pursued G2 early in Game 3, as Rizzo and Chicago had clear shots at the goal, with neither able to convert. G2 regrouped, though, as Rizzo took a Chicago miss off the crossbar and knocked it in for an early lead. Kaydop looked to respond, but while an attempted shot hit the wall well over the goal, he drove back around and knocked the ball back into the goal to tie the game. Both teams traded the ball into the final minute until Kaydop knocked a Fairy Peak pass long distance into the goal to put Vitality up 2-1. Vitality cleared the ball off from there to put themselves at tournament point.

Game 5 game saw G2 Esports look to avoid a sweep after Reed "Chicago" Wilen knocked a Jacob "JKnaps" Knapman pass into the net in the opening minute. Alexandre "Kaydop" Courant narrowly missed a tying shot at the 90-second mark, as Vitality struggled to set up a good shot. G2 tried to respond with an insurance goal, but Chicago got demo'd for his troubles. But G2 stayed persistant until Dillon Rizzo got the team's second goal at the three-minute mark. Kyle "Scrub Killa" Robertson got Vitality going less than ten seconds later with a goal to put his team on the board. Cars were blowing up left and right going into the final minute. Scrub Killa couldn't convert a 1-on-3, nor could Kaydop or Victor "Fairy Peak" Locquet follow-up. G2's defense was at its best, as JKnaps knocked out every Vitality shot. G2 was still alive, as they took Game 5.

This wrapped up an eventful day at the Prudential Center. Vitality further proved their mettle in the semifinals with a statement series over defending champions Cloud9. Vitality swept the former champs 4-0. As the crowd soaked in the victory, they made some noise of their own, as they set a world record for the longest wave, going well over 23 minutes.

For their victory, Renault Vitality takes home $200,000, while runner-up G2 Esports leaves with $120,000. Scrub Killa took home an extra $5,000 as Worlds MVP, while Kaydop got to take home his third world championship in his Rocket League career, his first as a member of Team Vitality.