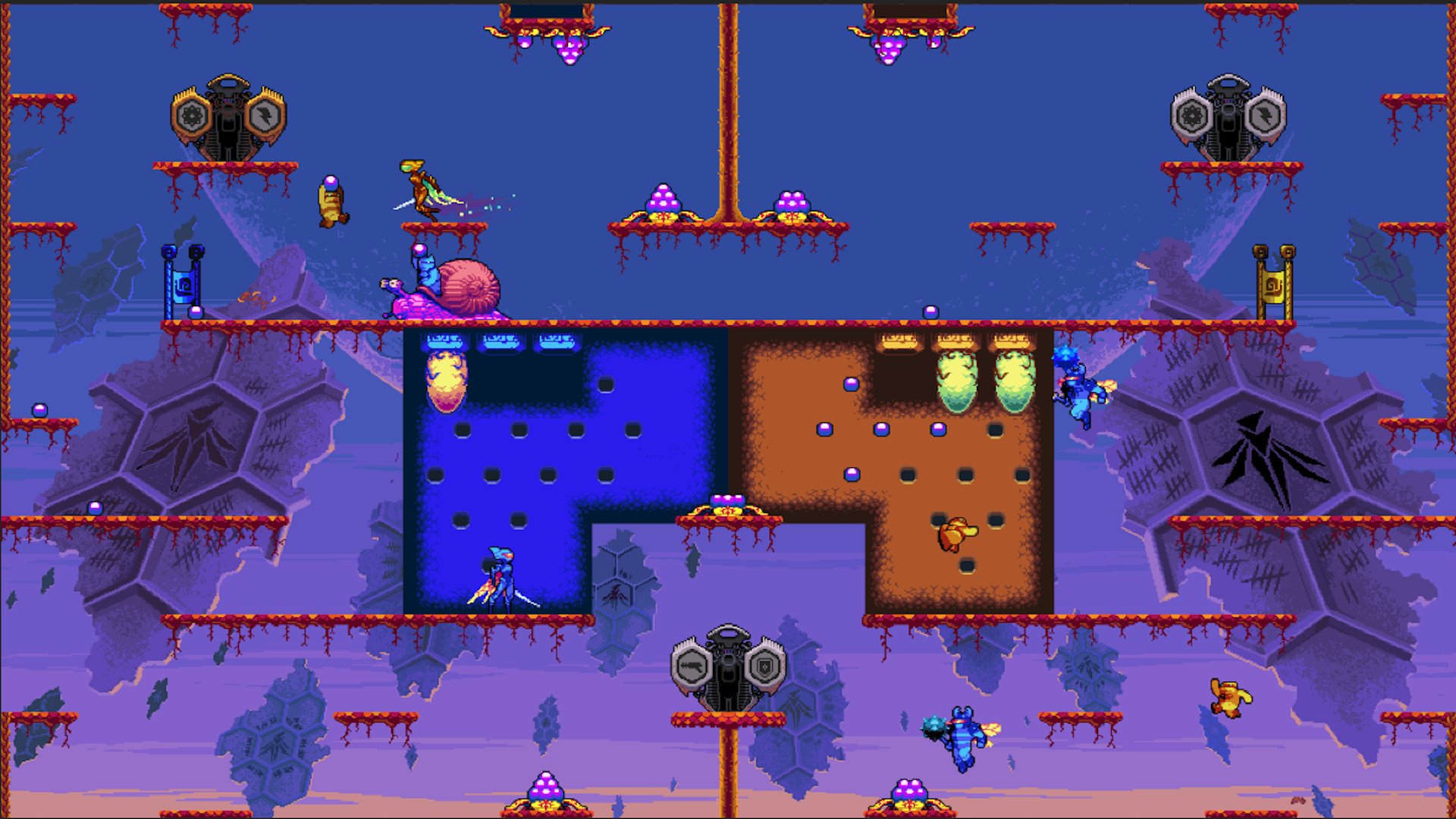 E3 2019 was home to a number of major publishers and big-time AAA games. However, there was one corner in the West Hall of the Los Angeles Convention Center that was dedicated to tbe best that indie gaming had to offer. IndieCade housed some E3's best hidden gems. After touring the booth and going hands-on with many of those gems, Shacknews is here to weigh in on the indie games that stood out to us from the fine folks at IndieCade.

It's been more than five years since Shacknews first laid eyes on a genuine, honest-to-goodness brand new arcade cabinet at IndieCade. It was hard to believe anybody was making arcade games in this decade, but one was indeed staring this writer right in the face. It was a 5v5 game called Killer Queen, a competitive multiplayer effort that saw a queen and her drones rally to claim victory. As the decade comes to a close, Killer Queen is being built for PC and consoles as Killer Queen Black, with indie developer BumbleBear Games getting some help from publisher Liquid Bit.

Having played and enjoyed many rounds of Killer Queen over the years, there was some curiosity to see how it would make the transition to home entertainment. As it turns out, even scaled down to eight players from the arcade's ten players, Black at its essence is still Killer Queen at heart. That makes it a total blast to play.

The idea is to claim victory either by filling your base with berries (Economic Victory), killing the opposing team's queen three times (Military Victory), or riding the level's big snail to your team's goal (Snail Victory). Maps are slightly smaller than their arcade counterparts, but still intricately designed to maximize chaos. Having less screen space to work with means that even with less players, there are more encounters between opposing players. That means there's a lot more fighting for berries and a lot more fighting for control of the snail.

Black also manages to stand out on its own with a fresh soundtrack, a best-of-five map format, and an updated presentation. Killer Queen is a blast and Black manages to capture that essence perfectly. Killer Queen Black is almost here, set to release on PC, Nintendo Switch, and Xbox One near the end of the summer.

Terry Cavanaugh has built a strong reputation as one of the most recognized names in indie gaming. Super Hexagon and VVVVVV speak for themselves, having become modern indie gaming classics. Now he's jumping into the world of RPGs with Dicey Dungeons.

Dicey Dungeons is something that starts off with an incredibly simple premise, but gets more and more complex as the game goes on. The idea is that this is a turn-based roguelike RPG, but one where almost everything is determined by a dice roll, from attacks to rewards. For example, the Warrior class can roll the dice and place a high number into his Sword attack. Some weapons only respond when rolling even numbers. Some attacks require multiple dice to combine into a bigger number. It's a simple idea and an easy premise to grasp, but as the enemies get bigger, the more surprisingly intense these encounters can get.

There are still several elements being tweaked for Dicey Dungeons. There's a character progression system, inventory system, an evolving art style, and other various D&D-style elements being implemented into the game. Dicey Dungeons is very early in development, but look for it to eventually make its way to PC.

I first encounters Neo Cab back at this year's Game Developers Conference and I relished the opportunity to give this effort from Chance Agency and Fellow Traveller another chance. Neo Cab takes place in the future and follows Lina, the last of a dying breed of rideshare drivers. She's having a routine night of escorting passengers around town when she finds out that her friend has gone missing.

The idea is to interact with passengers, learn about them, make enough money to survive and keep your car going, and keep a perfect driver rating. Along the way, more of the story unfolds, as Lina gets closer to the mystery of where her missing friend has ended up.

What makes Neo Cab so interesting is that Lina wears a device called the Feelgrid on her wrist. It monitors her emotions and lets players know whether she's feeling overwhelmed by whatever situation she's in. Players must determine when it's time to call it a night in order to help Lina maintain her mental health. This is a brilliant mechanic, putting a spotlight on emotional awareness and making self-care an essential part of the game.

The Neo Cab story should be a compelling one and it should be interesting to experience. Neo Cab is coming soon to PC and Nintendo Switch.

The Stonebot Studio traveled from El Salvador to deliver this genre mashup. The idea here is that in the post-apocalypse, all a man has left is his RV and his dogs. That means protecting them from the hordes of crazy freaks roaming the world.

At its core, The Last Friend is a tower defense game. Players are given only precious seconds to plant turrets and other defenses down on a three-lane grid before the weirdos come running. However, this is also a beat 'em up, as players can brawl with any of the enemies that come running. If any enemies get close to the defenses, they'll waste no time in trying to destroy them. So it's in the player's best interests to work their fists quickly. Combos work wonders here, especially if that combo involves grabbing an enemy and throwing him backwards while the turrets do their job.

The Last Friend is quirky, simplistic fun. It's a unique premise and while it's not reinventing any wheels, it's certainly doing good stuff with two tried-and-true genres. Look for The Last Friend to release later this year on PC, PlayStation 4, Xbox One, and Nintendo Switch.

Developer Novarama comes with a full pedigree of PlayStation titles, having previously worked as a Sony-exclusive studio in Europe. Now they're putting their experience to work building an action-RPG that's all about teaming up to take on bounties in the middle of a galaxy in chaos.

Killsquad already comes with a robust lineup of different classes, some that combine multiple traditional functions. For example, I played as a ranged assassin, but one that's able to drop med packs for teammates. Players will level up as they go along, picking skills in a manner similar to a MOBA. Combining active skills and passive abilities sounds like a lot of experimentation will be involved, but for the small amount of time I had with the game, the gunplay feels smooth, the enemies are fierce, and the worlds seem fairly vast.

The various planets promise to offer a number of twists over the course of a session, with various obstacles showing up. Large bosses will also show up and challenge teams to try and subdue it. The boss we encountered had some fairly simple patterns, but it hit hard and was able to take half our team down before ultimately falling.

Killsquad appears to just be getting started and will be taking community feedback early and often. Keep an eye on this one. It's set to hit Steam Early Access this summer.

This is only the smallest sample of what IndieCade had to offer at E3. For a look at all of the games represented at their booth, be sure to visit the IndieCade website.