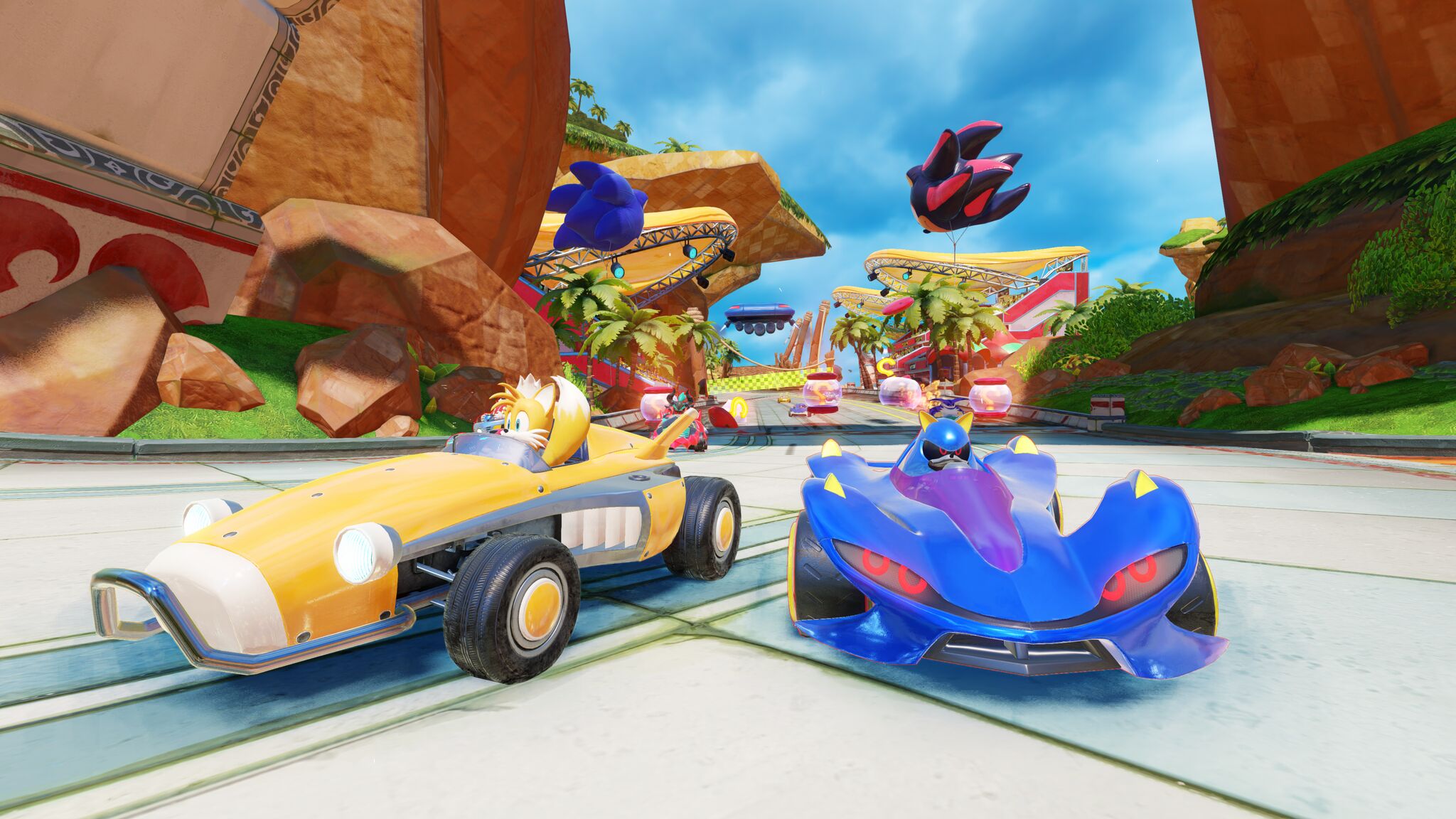 Sonic The Hedgehog’s racing franchise has been on a bit of a hiatus since the release of Sonic and All-Stars Racing Transformed in 2012. About seven years later, the franchise is back on the scene with Team Sonic Racing. Once again developed by Sumo Digital, this kart racer brings back fan favorites from the Sonic series, including some new faces.

The story of Team Sonic Racing takes place over the course of the Team Adventure game mode. Things kick off with Sonic, Knuckles, and Tails being mysteriously invited to participate in a series of races and tournaments by a new character named Dodon Pa. Furthering the mystery, Sonic is greeted by old allies and foes such as Amy Rose and Vector, who’ve also been roped in by Dodon Pa to participate in the tournament. Dodon Pa’s motives become clear and begin to take shape as you work your way through Team Adventure.

The campaign is broken into numbered chapters. Each chapter is mapped out like a game board, similar to the style seen in old-school platformers. You can choose to follow the linear path and play only the mandatory races, or stray off to the side levels and bonus missions. The ring challenges were a nice test to my skill, but ultimately felt like they weren’t worth the hassle. Before each race, there is a brief conversation cutscene that gives more insight into the narrative. Players that are in it strictly for the gameplay can skip them in their entirety by pressing X when selecting a race. I appreciated how all of the conversations had fully voice acted dialogue. It made a story with practically no cutscene animations still feel alive. The story itself I found to be okay, not terrible, but nothing special either. It hits predicatable beats and doesn't really leave you with any sort of lasting impression.

As mentioned earlier, there are some bonus missions littered throughout Team Sonic Racing’s story mode, but that’s pretty much the beginning and end of side content offered. Outside of this, the different game mode options seem empty. I’d love to see the team at Sumo Digital take the cuffs off and add some wacky and fun side content to Team Sonic Racing in the future.

In terms of skill, I found Team Sonic Racing to be one of the most tactical and strategic kart racers I’ve ever played. As alluded to in its title, there is a strong emphasis on the team aspect in Team Sonic Racing. A typical race is composed of 12 racers sorted into 4 teams of 3. Everyone races independently, and at the end, points are allotted to teams based on the placement of their different racers. Therefore, being number 1 isn’t good enough to secure a win. For example, if Sonic comes in first place, but knuckles and tails finish ninth and tenth, it’s extremely unlikely that Team Sonic will emerge victorious over a team that finished second, fourth, and fifth. I absolutely loved this twist to the gameplay. Playing against the CPU, it’s not too difficult to finish in first place, but now I have to actively work to ensure that my two teammates also finish in solid standing if I have any hopes of taking home the gold.

This is where wisps and item boxes come into play. As with most kart racers, Team Sonic Racing has item boxes laid out over the course that will grant participants different boosts, weapons, and abilities. The abilities themselves are what you’d expect: missiles, speed boosts, shields, bombs, etc. However, Team Sonic Racing puts a spin on this feature by allowing players to pass off an item box to other teammates who are more in need. We’ve all had those times where you’re so far ahead of the competition that the majority of powerups serve you no purpose, so you end up holding onto or wasting them. I had several instances while playing where I was leading the pack and acquired an offensive powerup like a missile. Instead of randomly firing it off, I simply pressed circle and transferred it to a teammate a few places behind and they used it to take out the foes ahead of them. This works in reverse as well, you can press circle and request an item box from your squad if you’re ever in need of a helping hand. Some wisps can’t be found in regular item boxes and can only be obtained through an item box transfer, just in case you needed any more incentive to utilize the feature.

The team functionality doesn’t stop there. If an ally was recently spun out and is moving slowly, you can “skim” by them and provide a speed boost. Also, there is a maneuver called the slingshot, in which one racer will follow a yellow streak left behind by a teammate in order to receive an acceleration boost. The longer you stay in the stream, the stronger the slingshot.

The cars themselves play a significant role in Team Sonic Racing as well. Each character and their vehicle fall into one of three categories: speed, technique, and power. Speed characters such as Sonic and Amy are some of the fastest in the game, but suffer in terms defense, where a character like Vector excels. There was a clear contrast in feel when trying out different characters. I moved notably slower when playing as knuckles, but wasn’t as impacted by incoming attacks. When I tried my hand at Amy, I easily zipped past the competition, only to be surpassed by them later on as I was constantly crashing into walls and corners. Personally, I found myself playing as technique racers for the majority of the game. I appreciated their high level handling and moderate acceleration stats. Besides, my two favorite Sonic characters (Tails and Silver) both happen to be technique racers. All of the standard teams have a racer from each category. The different classes do a good job at balancing one another out during matches.

There’s also a pretty neat customization section where you can alter the look of different cars. You can completely change and edit the color and patterns, while decals, wheels, and parts can be unlocked through mod pods. Completing races across any game mode earns the player credits. These credits can be spent in the mod pods menu to randomly unlock different cosmetics. It’s a harmless feature, and one that I found fun to play around with after saving up credits for a few hours. Some mod pods will grant players in-game boosts that they can take with them for a slight advantage in team adventure mode.

Multiplayer is where Team Sonic Racing really shines. It also showcases just how versatile Team Sonic Racing really is. When playing locally, matches can get chaotic quickly. Yelling to friends asking for wisps, or getting chewed out by your buddies because you finished in last place and dragged the team’s overall score down provides that light-hearted sense of fun that not many games can give. On the other side, if you hop over to online multiplayer, you’ll find the highest level of competition that Team Sonic Racing has to offer. The necessity of cooperation forces you to not only worry about yourself, but constantly be aware of where your teammates are, what wisps they have, and what assistance can you provide them. Thankfully, the user interface always shows you what place your allies are currently in, along with their status. It’s these extra layers to gameplay that make Team Sonic Racing feel like more of a skill-based endeavor than others in the genre.

Team Sonic Racing is a strong return to form for Sumo Digital’s kart racing spin-off series. Built on a solid foundation of gameplay, the risks taken with the implementation of the team dynamic pay off big time and sets Team Sonic Racing apart from other available titles in its class. Although it could use some beefing up in terms of side content, Team Sonic Racing is a versatile experience that fans of the franchise will adore.

This review is based on a digital PS4 copy of the game provided by the publisher. Team Sonic Racing will be avaiable on Xbox One, PC, PlayStaion 4, and Nintendo Switch on May 21 for $39.99