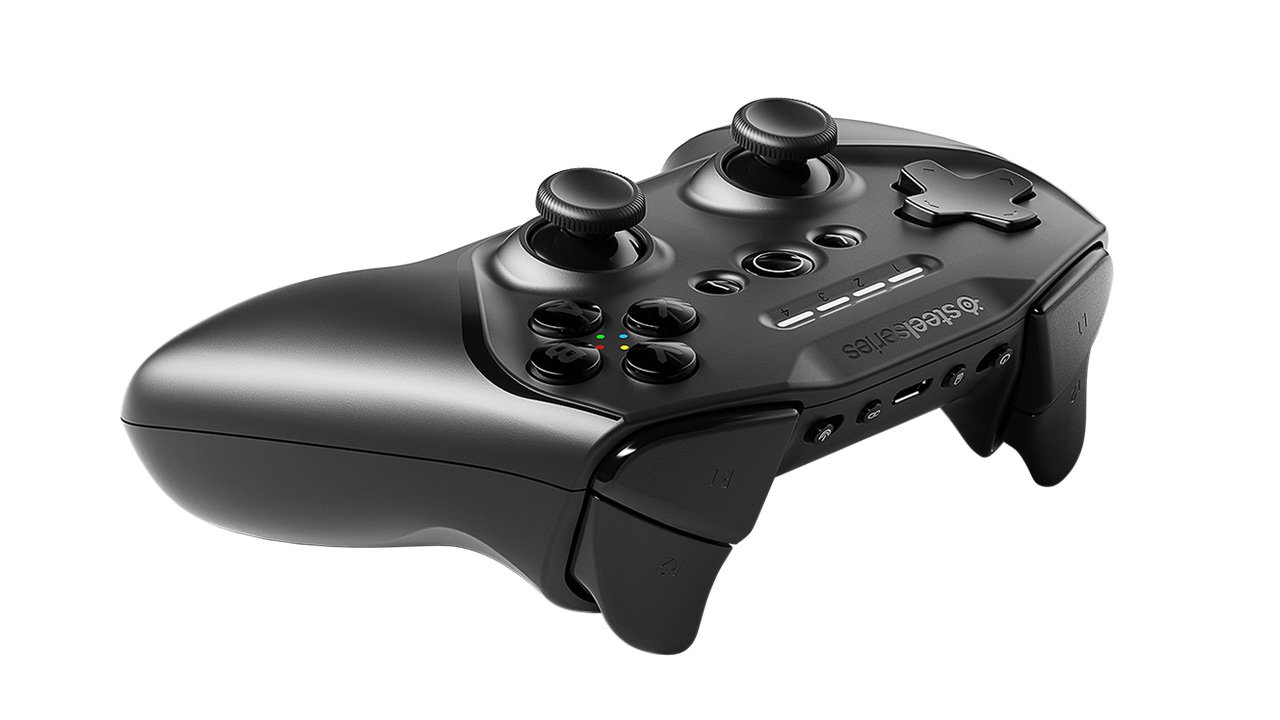 As a PC gamer who is still making the slow transition to mouse and keyboard competency, controllers are still a big part of my gaming experience. I’ll often flip back and forth between mouse and keyboard and a controller depending on the game and experience, so I was glad to give the SteelSeries Stratus Duo Wireless Controller a spin to see how it holds up to my needs. It came through in places I’d expect SteelSeries to excel but fell a bit short of some of the familiar options on the market.

Straight out of the box

The SteelSeries Stratus Duo Wireless Controller comes in quality packaging that was easy to open and not oversized. The contents of the box included the controller, USB wireless adapter, micro USB cable, and the manual. Everything was in the box and nothing left my scratching my head wondering what it was for or why it was included.

My first impression holding the controller was that it felt more Xbox and PlayStation, which is a necessary distinction for most people to consider. As I’ve come to expect from SteelSeries products, the Stratus Duo is as solid as they come. Whereas I can squeeze and twist a DualShock 4 controller and hear it squeak and bend ever so slightly, the Stratus Duo is rock solid. It would make a fine throwable item in Hitman 2.

I’m typically fine to plug my controllers into my PC with a micro USB cable, and that’s an option here, but I appreciate the need for wireless capabilities and opted to go wireless with the Stratus Duo right out of the box. Wireless setup was a breeze. All that was required was to plug the wireless adapter into a free USB port on my PC, then turn the controller on using the power button on the front. I was ready to roll right from there, and had no trouble maintaining a wireless connection or battery charge through most of my testing. When the battery did get low, I plugged the controller into my PC using the micro USB cable provided and was able to continue without interruption. The Stratus Duo also comes with Bluetooth capabilities, but I couldn’t test these because I didn’t have a compatible device, such as an Android phone or VR headset.

Where I started to see weakness in the Stratus Duo was with button layouts and the overall button design with the controller. I found the analog joysticks a bit stiff, making aiming in a first-person shooter like Destiny 2 slower than I needed. Although I thought this might just be a new controller needing to be broken in, it never caught up to the light and snappy feel of a DualShock 4. I also found that the back/select button, which in Destiny 2 is used to call my sparrow or bring up the map, was frustratingly hidden behind the left analog joystick in such a way that I had to climb over to the top of the joystick to reach it. It doesn’t help that the back/select, forward/start, and home buttons are all sunken into the controller’s face, making them difficult to access in the blink of an eye, which is problematic in many shooters.

The shoulder buttons and analog triggers don’t cause as many problems as the analog joysticks, but they too lack the same snappy quickness that a shooter will often require. While they do feel smooth to press, this comes at a cost of speed which, again, is a problem if this controller is used for multiplayer games and shooters that require quick reactions and adjustments.

Hope for the future

The SteelSeries Stratus Duo Wireless Controller isn’t bad, but it also isn’t on par ergonomically with some of the more popular options by Microsoft and Sony. It’s certainly sturdier than any other controller I’ve used, which is what I’d expect from a SteelSeries product, but that sturdiness does it a disservice when lightning fast button inputs are required. For those needing a wireless PC option, this might be worth consideration. However, those looking for a wired solution for shooters and games where ultra-fast inputs are required might want to let SteelSeries work out a few more kinks and wait for the next iteration.

This review is based on a review unit provided by SteelSeries. The SteelSeries Stratus Duo Wireless Controller is available now.