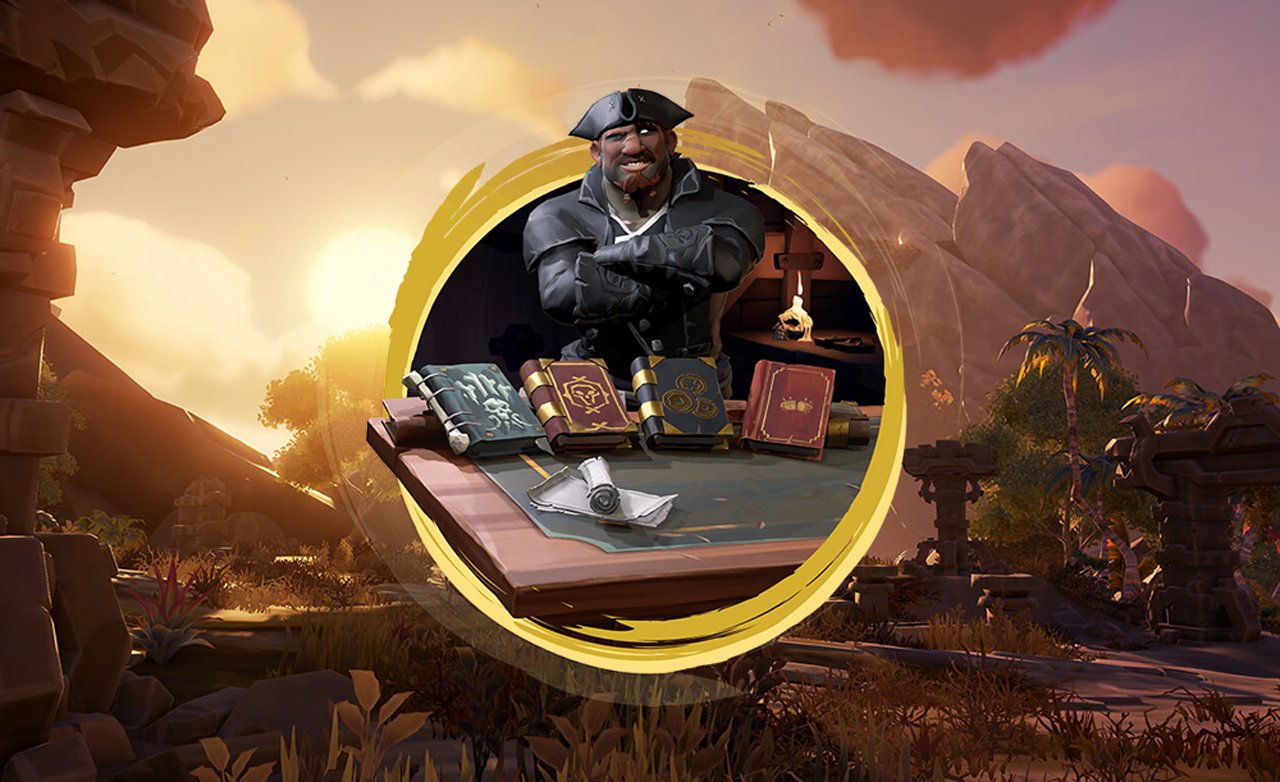 All journal locations – Shores of Gold

There are 50 journals to be found in the Shores of Gold Tall Tale. These journals are spread across the nine voyages and are all hidden throughout the Sea of Thieves. Each voyage’s journals can only be found while that voyage is active. What this means is that once a voyage ends, the journals will disappear and they will only appear once the voyage starts again.

Use the following links to jump to the journals you need to find:

N13 uncharted island: The first of Mercia’s Lost Memories is found on the uncharted island where the Magpie’s Wing is located. You can find it on a small islet by some rocks.

Devil’s Ridge: This journal is found on the north-east side of Devil’s Ridge, on the barrels beside the cannon guarding the sea.

Thieves’ Haven: To find this journal, sail into the center of Thieves’ Haven and go to the shore across from the shipwreck. The journal is in a box under the little shelter.

Plunder Outpost: The last journal of Mercia’s Lost Memories in Shroudbreaker is on Plunder Outpost, by the shoreline in the upturned rowboat.

Shark Bait Cove: The first of the Bounty Hunter Journals is found on the south side of Shark Bait Cove. Go through the tunnel into the inside ring and turn right. The journal is in the rowboat.

Discovery Ridge: Go to the northeast side of the island and follow the shoreline around to find a wrecked rowboat with a skeleton. The journal is beside the skeleton.

Kraken’s Fall: Start on the south side of Kraken’s Fall and run through the tunnel to reach a fence. On the left side is a pile of bones, the journal is behind the bones up against a rock.

Wanderer’s Refuge: Go to the well on the center island (toward the south) and then walk north toward the ruins. The journal is on the outside of the first ruin on the left, tucked between the stones and the wood.

Crook’s Hollow: The final Bounty Hunter’s Journal is in the caves on Crook’s Hollow. Start at the NPC on the pier (Wild Henry) and go into the cave system opposite him. Follow the cave around to the left to find a skeleton tied up and resting against the wall. The journal is beside the skeleton.

Lone Cove: The first of Briggsy’s Journals is in the cave on Lone Cove. Go to the northwest side of the island, head inside the cave, and then to the back right to find the journal.

Mermaid’s Hideaway: Go to the campfire and cooking pan on the northwest shore to find the journal in a broken barrel.

Old Salts Atoll: Head to the shipwreck and search its bow to find a hole near the bowsprit. Tucked inside the hole is the third journal.

Dagger Tooth Outpost: Search the bookshelf in the tavern by the fireplace to find the journal.

Each of the journals as part of the Stars of a Thief is beside one of Sudds’ star-gazing equipment on each island.

Rum Runner Island: The first of Sudds’ Notes is found on the northeast islet, by the rocks.

Snake Island: Another journal is on the center island, on the north side. Look over the ledge on the right to spot the journal.

Devil’s Ridge: Sudds’ Note is at the very top of Devil’s Ridge, on the large stone outcropping. You will need to jump and climb up the stones and rocks to reach the star-gazing equipment. The journal is under the parchments.

Crescent Isle: The last of Sudds’ Notes is on the southern section of Crescent Isle. Follow the path up to the rear of the island where some boulders overlook the ocean to locate the journal.

Rapier Cay: The first of the Lovers’ Notes is found in the middle of Rapier Cay. Look for the barrels, the journal is on top of the pots and pans.

Cannon Cove: This journal is found in the bay of Cannon Cove, in the barrel by the campfire.

Lone Cove: To find this next journal, go to the center of Lone Cove and search around the large boulder.

Lagoon of Whispers: Another journal is to the southeast side of the island, on top of the barrel.

Sailor’s Bounty: The last of the Lovers’ Notes is found on the northern side of Sailor’s Bounty, on the little islets. Look for the group of barrels and crates, the journal is on the ground.

Plunder Valley: The first of the Trapmaker’s Journals is in the room with all the skeletons that must be moved to solve the puzzle.

Discovery Ridge: Another journal is near the top of the island, above the canyon. Look for the lights around a couple of barrels, the journal is on top of a barrel.

Sailor’s Bounty: The last three of the Trapmaker’s Journals are found in her workshop. One is tucked between the tables near the entrance, the next is below the bed, and the last is by the anvil.

The last Trapmaker's Journal is beside the anvil in her workshop in the caves of Sailor's Bounty.

The Fate of the Morningstar journals

All of the journals for Fate of the Morningstart are found on Old Faithful Isle. Because the island is so large and the landmarks are difficult to pinpoint, it’s worth collecting these journals in a specific order. There’s a natural progression to them that will take you up and over the island.

Ghost Hunter’s Journal 1: The first Ghost Hunter’s Journal is found on the southern shore of Old Faithful Isle. Start at the beach and walk north, but don’t continue up and into the heart of the island. Instead, turn right and enter the cave. Run past the white flag to find the journal on a rock.

Ghost Hunter’s Journal 2: The second journal is found along the western cliff of the island. Start at the south beach and follow the path up. Look out for a kraken’s skull, the journal will be sitting in its eye.

Ghost Hunter’s Journal 3: The next journal is a short distance from the kraken’s skull found on the west side of Old Faithful Isle. Start at the skull and continue up the path. Follow the path to the right and walk below the hanging cage. Pass between the rocks to find a dead tree on your left. The tree will be next to a shrine of bones, beside which is the journal.

Ghost Hunter’s Journal 4: This journal is found at the very top of Old Faithful Isle, on the rocky peak overlooking the island. From the shrine of bones, turn around to face the peak and then simply follow the path to the top. The journal is beside a skeleton.

Ghost Hunter’s Journal 5: The last of the Ghost Hunter’s Journals is a little more difficult to find, as it’s tucked away on a random wooden tower overlooking the canyon. To find it, start at the highest peak and face east-southeast. Run down the hill and directly across the field. Look for the large wooden wall with a doorway, go through it and immediately turn right. You should see a wooden bridge ending at a rock wall. Cross the bridge and look on the wooden floor of the tower to find the journal.

Revenge of the Morningstar journals

Marauder’s Arch: Eli Slate’s first journal is found on Marauder’s Arch, on the ledge right below the highest peak. Climb the slope toward the highest peak, but instead of walking up to it, look for a path leading down and around the peak. Follow this path down to find the journal near some barrels.

Boulder Cay: The next journal is found on the west side of the island, in a crate on top of some barrels.

Cannon Cove: This journal is found to the south of the bay, up the hill. Start at the campfire in the bay, and run south up the path. Run up the grassy hill to find some barrels and an ammo crate. Behind these, tucked against the rock, is the journal.

Sunken Grove: Elite Slate’s last journal is on the northeast islet of Sunken Grove. You can find the journal near the lantern on a rock.

Shores of Gold, the namesake of Sea of Thieves’ first Tall Tale, contains ten journals for players to find. These journals are written by none other than Briggsy, who’s journals you’ve already found! There are five journals hidden above the island and five hidden below.

Briggsy’s Journal 1: The first of Briggsy’s journals can be found by her shipwreck on the south of Tribute Peak. Use the map in the journal to work out exactly where this is. Once the shipwreck is found, search what would be the captain’s quarters to find the journal on the ground.

Briggsy’s Journal 3: Another journal is found in the compass vault itself. This is where you must bring the four medallions. The journal is on the right-hand side of the room, in a crate.

Briggsy’s Journal 4: This journal is found north of the line of statues. Walk up toward the ruins to find a set of stairs circled by more statues. Go down the stairs and look behind the fallen statue to find the journal.

Briggsy’s Journal 5: A journal is found on top of one of the ten statues. You must use your ship’s cannon to fire yourself onto it. The statue you want to land on is the second from the south, on the inside line of statues. The journal is on its arm.

Briggsy’s Journal 6: The sixth journal is the first one you can find underground. As soon as the doors open, look inside on the left to find the journal sitting in a crate.

Briggsy’s Journal 7: This journal can be found as you come out into a large room with a hole in the center and a destroyed path on the right. Turn right and go over to the fallen ceiling to find the journal among the debris.

Briggsy’s Journal 8: To find this journal, make it across the ship’s masts jumping puzzle in the dark room. You will arrive at a small area lit by a single fire. Beside the fire is an opened chest and a crate, search the crate to find the journal.

Briggsy’s Journal 9: Another journal is found in the room with the spikes on the floor and three levers. At the back of this room is wooden scaffolding. Use the statue to jump onto the scaffolding. The journal is tucked behind some stones.

Briggsy’s Journal 10: The last journal is after the room with the spike traps in the floor. As you’re walking up the wooden path, go onto the wooden platform on the right. On this platform is the last of Briggsy’s journals.

Once all the journals in the Shores of Gold Tall Tale are collected, you’ll be one step closer to unlocking all the cosmetics. Be sure to check out the Sea of Thieves guide for more collectible guides and helpful articles!