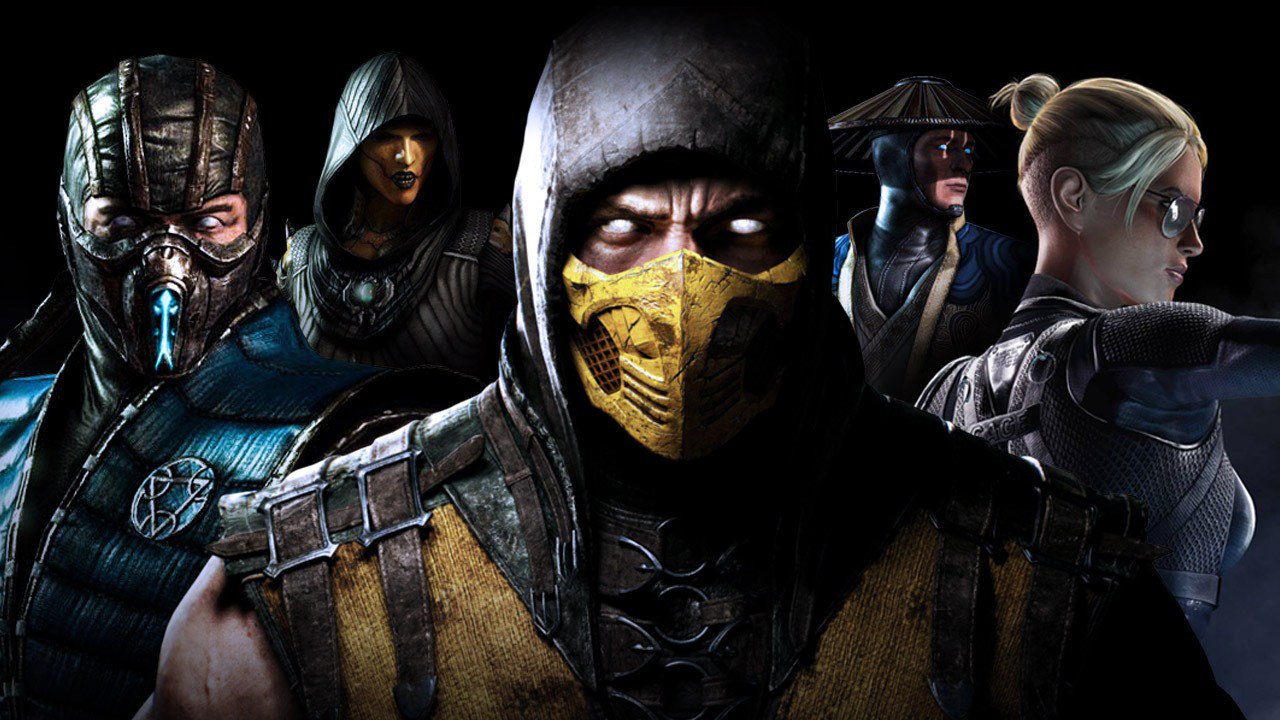 Mortal Kombat 11 is arguably the biggest release in the series' history. The crew at NetherRealm Studios pulled out all the stops to make it as polished as can be, and much of that polish comes from a fresh cast of voice actors for various Mortal Kombat fighters. Some of the new voice talents are returning from previous games, but others are brand new additions. Keep reading to learn more about each of the featured voice actors in Mortal Kombat 11.

As with several other video games on the market, the Mortal Kombat 11 IMDb page does not always distinguish between voice acting and performance capture duties. As such, it's possible that some of the actors featured below also provided performance capture for their roles. Thankfully, we can confirm that each of the featured cast members on this page lent their voices to the game's characters, in some cases voicing more than one.

Both Cyrax and Shao Kahn are voiced by actor Ike Amadi, whose video game credits date back to 2008 release The Bourne Conspiracy. Since then, Amadi has lent his voice to various in games such as Mass Effect 3, Diablo 3, Grand Theft Auto 5, Halo 5, Fallout 4, Mafia 3, and Fallout 76.

Shinnok and Erron Black in Mortal Kombat 11 are voiced by industry legend Troy Baker. Well-known for delivering dramatic performances, gamers will almost certainly have heard Baker's voice in titles such as Far Cry 4, Heroes of the Storm, Metal Gear Solid 5: The Phantom Pain, Batman: Arkham Underworld, Uncharted 4, God of War 2018, Bioshock Infinite, The Last of Us... the list goes on and on.

French actor and BTVA Video Game Voice Acting Award winner JB Blanc voices Kano in the latest Mortal Kombat release. Film and TV fans may recognize him for his roles in The Count of Monte Cristo as well as Breaking Bad, but gamers will likely recall his voice from characters in games such as Star Wars: Knights of the Old Republic, Everquest 2, World of Warcraft, Street Fighter 4, Dragon's Dogma, Titanfall, and Horizon Zero Dawn.

Iconic MK kombatant Sub-Zero as well as blade-happy brawler Baraka are both voiced by industry star Steve Blum. By far one of the most prolific voice actors on this list, Blum's video game credits cover over 400 titles, including Call of Duty: Black Ops 4, Lego DC Super-Villains, Red Dead Redemption 2, Command and Conquer: Rivals, Ace Combat 7: Skies Unknown, and Travis Strikes Again: No More Heroes in the last year alone. Outside of games, he's perhaps best known for his work in TV series Star Wars Rebels, Transformers Prime, and Wolverine and the X-Men.

Andrew Bowen returns to voice Johnny Cage after lending his talents to the nutcracking Hollywood hero in Mortal Kombat X. Beyond the Mortal Kombat series, game fans may recognize him from his work in Tom Clancy's The Division, Protocol, Star Wars: The Old Republic, Killzone 3, and Red Dead Redemption 2. TV fans may also recognize his face from fan-favorite series MADtv, ER, Reno 911, and Magic City.

Raiden in Mortal Kombat 11 is once again voiced by Richard Epcar, who has lent his talent to the god of thunder in four separate Mortal Kombat games. Epcar's voice acting resume is extensive, with credits dating back to the 1994 release of Might and Magic: World of Xeen. Since then he's acted in several high-profile games including Warcraft 3, Neverwinter Nights, Final Fantasy 11, World of Warcraft, Kingdom Hearts 2 and 3, Odin Sphere, and more recently both Soulcalibur 6 and Marvel Ultimate Alliance 3: The Black Order.

California native actor and comedian Phil LaMarr provides his talents to the role of Kotal Kahn. A prolific actor in every sense of the word, LaMarr has over 100 video game voice acting credits, including titles such as Metal Gear Solid 2, Doom 3, Star Wars: Knights of the Old Republic 2, Quake 4, Saints Row 2, Rage, Diablo 3, and both Darksiders 2 and 3.

WWE Champion and former mixed martial artist Ronda Rousey provides the voice of Sonya Blade in Mortal Kombat 11. Aside from appearing in both EA Sports UFC 2 and WWE 2K19, her acting credits notably include roles in films Furious 7, Mile 22, and The Expendables 3. She's also appeared as herself in a number of TV specials, and played the role of Gallus Mag in an episode of Drunk History.

Japanese actor Cary Tagawa returns to the Mortal Kombat series after having played Netherrealm villain Shang Tsung in the 1995 Mortal Kombat film. Outside of his extensive movie career, video game fans may recognize Tagawa's voice in games like Batman: Rise of Sin Tzu and World of Warcraft: Legion.

Ron Yuan provides the voice of Scorpion, also known as Hanzo Hasashi, in Mortal Kombat 11. He returns to the role after voicing the same character in TV series Mortal Kombat X: Generations. Yuan has a large number of video game credits on titles such as Call of Duty: Black Ops 2, Resident Evil 6, The Elder Scrolls Online, Prototype, and World of Warcraft.

Sean Chiplock's voice acting resume covers over a decade of video games and TV including MapleStory, Hunter x Hunter, Killer Instinct 2013, and The Legend of Zelda: Breath of the Wild.

TV acting veteran Megalyn Echikunwoke is known for her work in series like 24, That 70's Show, CSI: Miami, and Made in Jersey.

Jennifer Hale provides the voice for Kronika in MK11, but gamers might be most familiar with her work playing Commander Shepard a.k.a. Femshep in Mass Effect 1, 2, and 3.

Kellu Hu returns to the MK series after voicing D'Vorah, Sindel, and Frost in Mortal Kombat X. Game fans may recognize her voice from titles such as Fracture, Sleeping Dogs, and Battlefield Hardline.

Erica Lindbeck provides the voice of Cassie Cage, but gamers can hear her in all sorts of games from Anthem to Far Cry New Dawn and Super Smash Bros. Ultimate to Soulcalibur 6.

Aside from voicing Kung Lao, Sunil Malhotra has lent his talents to characters in games such as World of Warcraft, Halo: Reach, Fallout: New Vegas, Diablo 3, and Dead Rising 3.

The voice of Sheeva is provided by Vanessa Marshall, whom comic fans may recognize from several Marvel and DC TV series such as The Avengers: Earth's Mightiest Heroes and Young Justice. Her video game credits comprise over 100 titles including Metal Gear Solid 2, Everquest 2, Viewtiful Joe 2, Metroid Prime 2, and Star Wars: Knights of the Old Republic 2.

The voice of Cetrion is provided by actor and voice director Mary Elizabeth McGlynn, known for her work on a number of Naruto projects as well as TV series Blade, Tenkai Knights, Digimon Fusion, and Rapunzel's Tangled Adventure.

Sektor and Geras are both voiced by Dave B. Mitchell, a longtime video game voice actor heard in games such as Fallout 4, Paragon, Pillars of Eternity, Halo 4, and Resident Evil 6.

Beyond voicing the Kollector, actor and audio guru Andrew Morgado can be heard in games such as Halo Wars 2, World of Warcraft, Borderlands: The Pre-Sequel, and God of War 2018.

The announcer of Mortal Kombat 11 is voiced by Jamieson Price, whom fans may recognize from roles in games like Catherine: Full Body, Kingdom Hearts 3, Left Alive, and Dead or Alive 6.

The voice of Kitana is provided by Kari Wahlgren, a voice acting legend with over 200 video game acting credits including titles like Halo 2, World of Warcraft, No More Heroes, Devil May Cry 4, Brutal Legend, Final Fantasy XIII, and many others.

Liu Kang voice actor Matthew Yang King will likely be familiar to TV fans for his roles in series such as Naruto, Numb3rs, 24, G.I. Joe: Renegades, and Supah Ninjas.

The huge variety of voice actors and voice acting talent on display in Mortal Kombat 11 help push NetherRealm Studio's latest release straight to the top of its class. Giving the game's colorful cast of violent characters a proper sound couldn't have been easy, but the results clearly speak for themselves. Find more information on the latest gore-filled MK release by heading over to Shacknews' Mortal Kombat 11 walkthrough, guide, and FAQ.