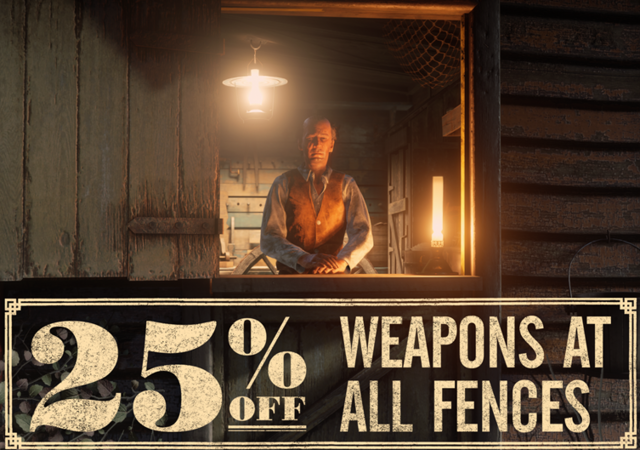 Looking to spend some time moseying around in Red Dead Online? There's a sale going on at the Fence, if you're keen on buying some new weapons.

As you're likely already aware, heading to a Fence is the best way to snap up illicit arms and supplies with outposts all across frontier America in Red Dead Online. You can buy and sell just about anything at them, including weapons. Speaking of weapons, the sale going on right now will net you 25% off all weapons, meaning you can snag just about anything you might have had your eye on for a reduced price.

If it makes a buying decision any easier, the Rank requirements on Fences have been lifted as well, so you can grab that dream weapon without having to worry about what kind of rank you are as well, which should be good news for most cowpokes.

There's also a sale going on for the equine enthusiasts out there, with 25% off all Saddles and Horse Care items at Stables or the Wheeler, Raton, and Co. Catalogue. Horses and guns sound like a great combination for any outlaw hitting up Red Dead Online if you ask us.

Our own Bill Lavoy reviewed Red Dead Redemption 2. Here's what he thought of it:

Red Dead Online is available to anyone who owns Red Dead Redemption 2 on Xbox One or PlayStation 4 now, and you can jump online and live out your outlaw dreams within its confines today if you're interested in doing so.