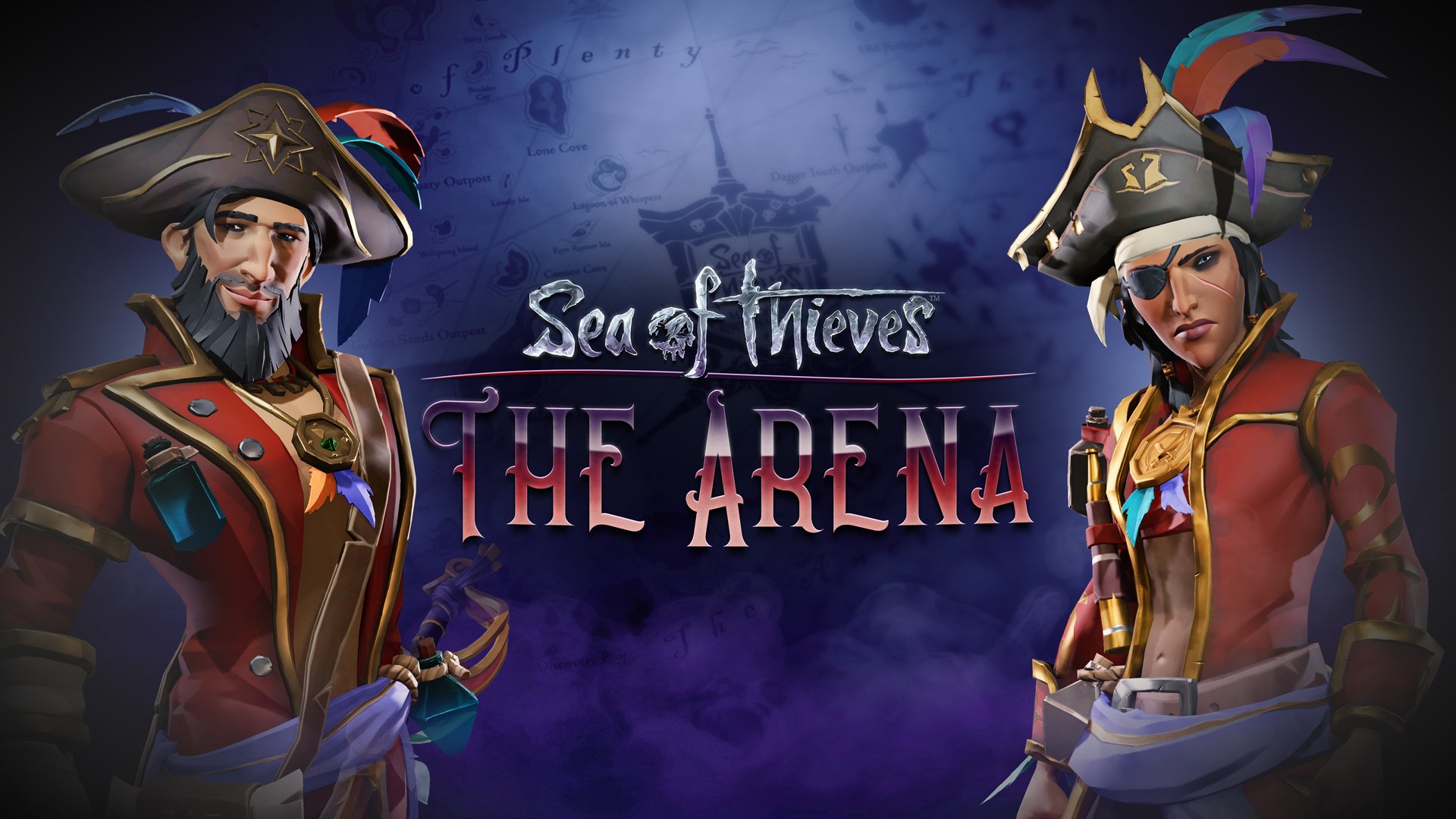 Sea of Thieves has grown a lot since its release in March of 2018, and now a year later, it’s continuing to evolve in ways players may never have expected. One of the biggest changes coming with the Anniversary Update this April is the inclusion of a brand new, incredibly intense, competitive mode called Arena.

I was lucky enough to be flown over to the UK to visit Rare and get some hands-on time with Arena. From what I played, there’s a very good chance this is going to be dominating any available free time I have. So let’s talk about what makes Arena so special!

The Arena is a brand new activity that condenses the entire Sea of Thieves experience down into a heated 24 minute match. Up to five galleons of four crew members each spawn into an area of the Sea of Thieves map with the Devil’s Shroud (the ship-damaging “end of the world” fog) marking a tight circle around the playable area. Each crew receives the same maps, containing any number of buried treasure. From here, players will need to dig up the treasure and deliver it to a cash-in point, all while fending off attackers.

The twist comes in the form of the point system. Everything you do in Arena rewards silver and the team with the most silver at the end of the match wins.

Digging up treasure rewards 250 silver while successfully handing treasure in nets you 1,000. Hitting an enemy ship with a cannonball rewards 25 silver while killing another player earns 5. The focus is definitely on the digging of treasure, but a team that can land shot after shot can easily rack up hundreds, if not a full 1,000 silver.

However, if you’re unlucky enough to sink, you’ll lose 1,000 silver. Keeping your ship afloat, dealing with enemy ships, and digging up and delivery treasure is the core loop. Considering you only have 24 minutes, things start getting intense very quickly as 20 players fight over a tiny island like Paradise Springs.

During my hands-on time at Rare, we managed to get in three games of Arena. Considering I play Sea of Thieves so much, there was a lot of personal pride on the line. Each match managed to feel long enough to make counter-plays feel possible while being short enough so as to avoid feeling too lengthy. Even if you manage to gain a commanding lead, there’s still the need to continue fighting to maintain it.

Because there are four other galleons to contend with, even if you manage to make a break and secure three chests, there’s still the very real chance that another galleon might be at another island, digging up treasure completely unopposed.

My crew won the first match, and as we were loading back into the tavern to gloat (a central hub where you can purchase cosmetics and suss out your enemies), we could overhear our opponent’s plans: “Aim for the Flaming Jackal, doesn’t matter if we lose, as long as they don’t win.” You see, each crew is assigned a ship, and for the duration of your time in a server, you will retain that ship name. It adds a lot of personality to each match, as you either try to maintain your streak of victories or start focusing on getting revenge on a ship that keeps winning.

And try as they might, our opponents were unable to best us in the second match. Two wins down, with a third to go.

All kinds of strategies began to emerge when playing Arena: boarding an enemy ship and dropping their anchor, sneaking onto a ship and stealing a chest, sitting on one of the cash-in points to kill anyone trying to make a drop, camping out on an island and killing anyone that makes landfall, “tapping” chests for the 250 silver and fleeing to ensure no one can easily find the chest, using the harpoon to steal chests off an opponent’s deck – everything was fair game and all playstyles were encouraged.

Unlike Adventure mode where some players want to engage in combat and others do not, when you dive into Arena you know you’re in for a good scrap. Even though it might be billed as the “competitive” mode, Rare doesn’t necessarily see it as being solely for the hardcore PVPers.

“It is competitive, but we’re hoping it’s a much more accessible competitive to a much broader audience,” Shelley Preston, Senior Designer, explained to me during our interview time. “Kind of like how Adventure was a more accessible online multiplayer game – we saw it was a lot of people’s first multiplayer game or some who thought they didn’t like multiplayer but they enjoyed it in Sea of Thieves. We’re hoping that Arena can do that for the competitive side of Sea of Thieves.”

In contrast to other competitive games where coming in last place means you earn nothing, every position in Arena earns a reward. This means there’s no point quitting, ensuring that matches stay full. But this isn’t to say Arena isn’t devoid of challenge or competition. While the casual player can find enjoyment in completing a match, hardcore players will be vying for top spot, earning the greatest rewards.

Furthermore, Rare plans to continue to add to Arena, seeing how far they can push this competitive mode. Joe Neate, Executive Producer, was excited at what Arena could potentially evolve into, “Arena is just the start though. How we start with this is that it’s a trading company: you can progress with it and there are cool rewards. As we look to the future of Arena, we ask: how can we build up tournaments around it? How can we build up a more competitive structure that allows for tournaments as well as people becoming more skilled or people playing in permanent crews? How do we support that in-game and how do you turn that into tournament play?” These are all good questions, and although there are no immediate answers, players that attach themselves to Arena will be pleased to hear that the team is already thinking about growing it further.

By the time we got to the third game, each of the crews had settled into a groove, becoming familiar with their teammates' playstyles and the strategies of their opponents. For every chest my team dug up and delivered, there was always a galleon at another island doing the same. The intensity certainly rises as you begin to debate whether you should spend the time pursuing and trying to sink an opponent or focus on defending your ship and continuing to dig treasure.

It’s a conversation that has to happen quickly, as the threat of the other galleons is always present. This is where the teamwork side really begins to shine. While someone with more “traditional” first-person shooter skills might excel at boarding another ship and running interference, it’s just as important to be able to keep your vessel afloat. My team recognized each of our skillsets and decided to dabble in a bit of everything.

I proceeded to board enemy ships to stop them from attacking our vessel. IGN UK’s Joe Skrebels started digging up treasure with a bloodhound-like accuracy and speed. PC Gamer’s Samuel Roberts and Rare Design Director Mike Chapman tended to the ship, navigated us toward the cash-in points, and generally dominated the ship-to-ship combat.

In the end, my ragtag crew bandied together and managed to defend our title, taking home three wins in a row. It was an exhilarating experience that has left me counting down the days until April 30.

As someone who loves a good sweaty competitive match (despite not being especially skilled), Sea of Thieves’ Arena is exactly the kind of competitive mode I can get behind. It offers those players who are vying for some action a dedicated place where they are guaranteed to put their ship skills to the test while also offering the casual player an approachable competitive mode.

It’s an exciting time to be a Sea of Thieves player. The Anniversary Update is looking to change up the game in a major way and the Arena is only just the beginning. Be sure to check out my write-up on Tall Tales – an entire campaign coming to Sea of Thieves and read the full interview with Shelley Preston and Joe Neate as we discuss the future of Sea of Thieves, private servers, and pets!