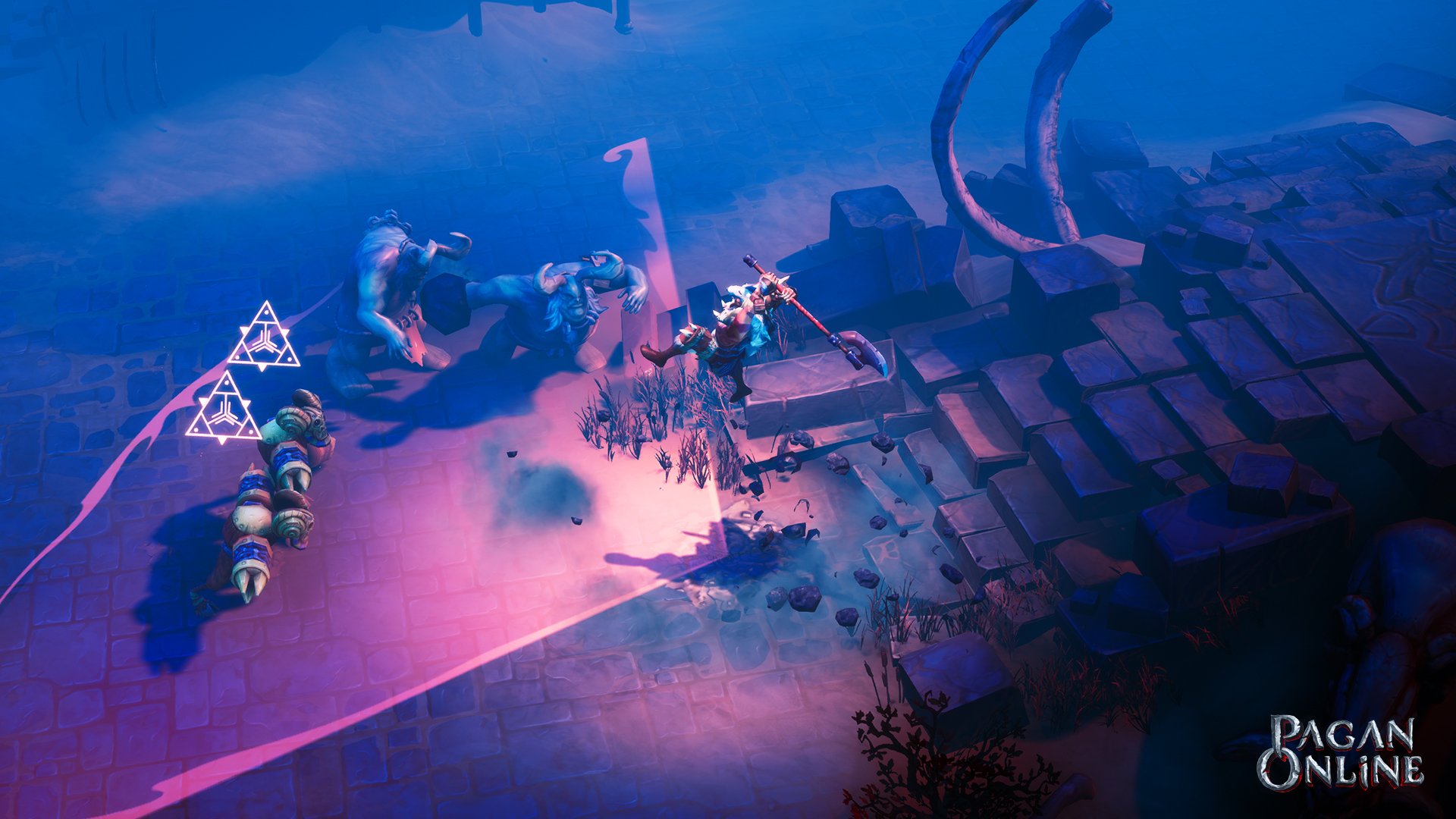 Pagan Online hands-on preview: The old gods and the new

Most folks know Wargaming from their flagship World of Tanks series or one of its many spin-off titles. And while the publisher’s cup may runneth over with “World of” there’s more to them than just that. Take for example their recent collaboration with Madhead Games’ on their upcoming Action-RPG Pagan Online.

If you were to simply look at a screenshot of Pagan Online you might assume it’s another Diablo or Guild Wars based simply on the similar aesthetics and isometric viewpoint. But that assumption would be dead wrong. Honestly, Pagan Online probably has just as much, if not more, in common with games like Marvel Ultimate Alliance and Warframe than it does Diablo.

Much of the story is based off Slavic mythology but it all takes place in a land where gods of light keep the balance between good and evil. Players will take on the role of a hero slain in battle whose soul has been sent to the Pantheon. Upon arrival, it is discovered that the gods have disappeared and you’re then sent out on a quest to find out exactly what is going on.

Throughout the quest, players will take on the role of several heroes with their own unique skill sets. All the hero archetypes borrow heavily from several traditional classes, but each is set up to be a dynamic blend that isn’t any one type. For example, Istok is a combination of tank, melee, and bruiser classes with a lot of shield buff powers and a hammer and Anya is a mix of a spell caster and a long ranged fighter and all her skills steal health from enemies. In order to level up, players will have to increase the might level of individual heroes. It seemed very similar to Warframe’s mastery system, which has you grind to the level caps of each individual suit you wear before you can take a test to level up your account.

Right now there are only 5 heroes available to try out, but three more should be coming soon. Each player gets one hero in the beginning and can unlock more by collecting hero shards found throughout the game. Players will also unlock 8 skin variations for each hero by leveling them up.

Levels are made to be quick, bite-sized adventures that players can get into, smash everything in site to pieces, and then get out again. The missions I tried out were roughly ten minutes long, if that, but offered a lot of intense gameplay while it was happening. Combat is really similar to the Ultimate Alliance series and uses a WASD-style set up that should translate easily to a controller.

Mission objective can range from beating up a bunch of monsters, then taking down a boss creature, to defending an NPC as they do an incantation. Along with the main missions, players can expect three other modes: survival, defend the shrine, and expedition, which features longer, more complex battles. At the end of each mission, players will get a skill score based on their combos.

Ambitiously, I played against type and selected Anya as my hero for my hands-on demo. I found combat to be extremely fluid overall. While Anya wasn’t as strong overall, the fact that she could whip her enemies from a distant or cast health-leeching spell made her just formidable as a traditional fighter.

Players have their basic attack and a mix of character-based abilities at their disposal along with health potions and other one-time buff items. As players kill their enemies, they’ll collect new armor, weapons, and other artifacts to augment their heroes’ might levels. Materials can also be obtained and used to make new items in the Pantheon’s crafting forge. If a player dies in the middle of a mission they’ll still get to keep their drops. Right now, missions are only 2-player co-op, but Madhead is hoping to have 4-or-possibly-more-player missions integrated in the future.

The Pantheon serves as players’ hub world for their adventures and there will be up to 50 people in each instance of it. In the hub world, players are free to walk around and check out the stores, chat with NPCs, or get some crafting done. For those just wanting to get back into the action though, Pagan Online has clickable tabs at the top of the screen and big, red, “Battle Now” button on the bottom part of the screen, meaning folks can hop right back into the action or do their shopping without having to search the world for anything. I wish more games did stuff like this.

There was a lot that I enjoyed about my brief time with Pagan Online. While I found the combat to frenetic and the hero classes intriguing it was really a lot of the little design decisions for UI and leveling up that convinced me that this is a game to keep an eye on. There are a lot of things from a lot of games that I really, really love that Pagan Online takes its cues from and Madhead claims that the game is still improving week after week.

Right now, Pagan Online is still planning to integrate pets into its next build and will offer up an exclusive one for players who participate in their closed trials. Beyond that, things like daily missions, weekly events, and regular content updates that include new heroes are all part of the game’s overall road map. Madehead is hoping to have something new for players each time they log in.

Pagan Online should be going into early access soon, and once it fully launches, players will only have to make a one-time purchase for all the core and planned expanded content. Beyond that one-time purchase, there are no microtransactions planned for Pagan Online whatsoever. Right now Steam and the Wargaming Center are the only storefronts planned for the PC exclusive Pagan Online, but things like that can always change. While there’s no exact date for early access just yet, or price point, we’ll be sure to keep you up to date on Pagan Online as more details become available.

Unbound: Worlds Apart review: You get the best of both
Login / Register