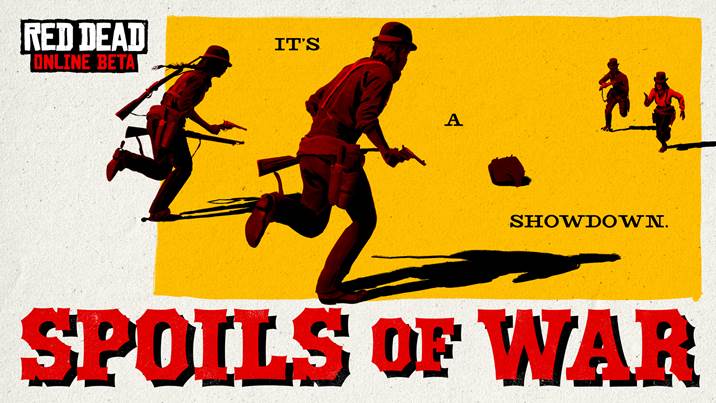 The Red Dead Online Beta just got another update this week in the form of Spoils of War, a new gameplay mode.

Spoils of War comes to the Red Dead Online Beta, which adds tight, dramatic player vs. player modes that bring more structured gameplay sessions into the game. They also act as ways for players to more easily complete Daily Challenges.

Spoils of War can be launched via the Featured Series tile in the Red Dead Online Beta menu, and then 2-16 players can compete in the team-based mode. Both teams work to defend their own stockpile and raid the other's. Each team is tasked with stealing loot from their opponent's base and returning it to their own, all the while keeping their stuff safe. The winner at the end of the match is whoever's managed too teal the most.

Additional benefits for players this week include a 20% XP boost on all Showdown Modes. Winning one Spoils of War match will net you 8x Dynamite Arrows to pick up from either your Camp Lockbox or the Post Office as well.

There's also a special outfit up for grabs: the Tasman Outfit for men, and the Danube Outfit for women, along with Tied Pants, a Hitched Skirt for women, a Winter Shotgun Coat, Gardenia Hat, and a Squat Stovepipe Top Hat.

This isn't all Red Dead Online will be getting, either. There's improved catalogue functionality and organization on its way, new items, and other fixes on the horizon. If you're excited for Red Dead Online in the future, it looks like this is just the tip of the iceberg.