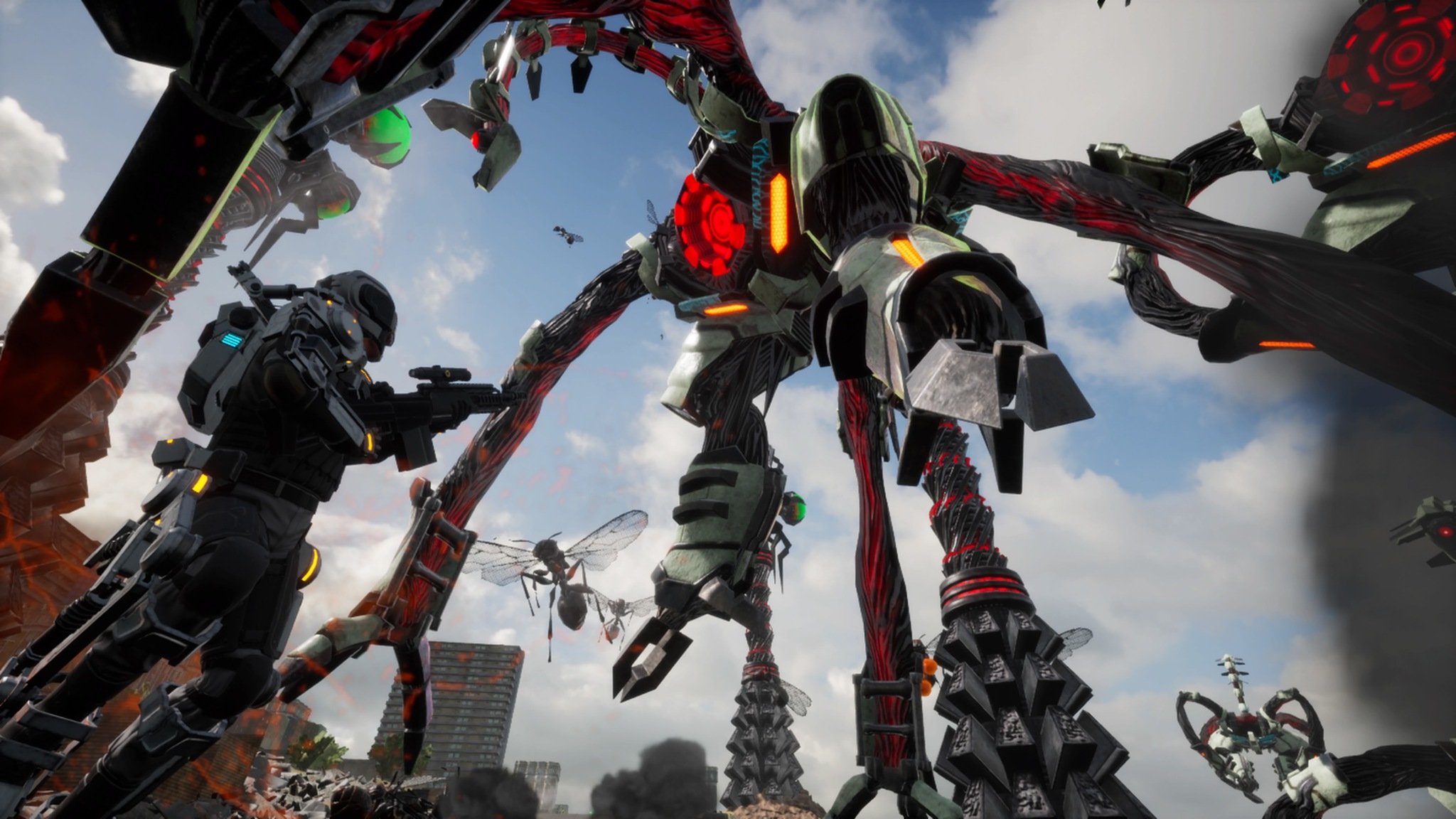 When I first got my hands on a demo version of Earth Defense Force: Iron Rain at last year’s Tokyo Game Show I was immediately excited as a fan of the series. It had finer details to it than the main series: Cityscapes weren’t laid out on flat surfaces and there were hills now. All the buildings, along with the giant bugs and kaiju that you fight in the EDF series, had much more texture to their skins and there was detailed cosmetic damage shown as they were all blown apart. But that brief experience did not prepare me for just how much Iron Rain would differentiate itself from its predecessors when I sat down with a more recent build of the PS4 exclusive.

Iron Rain takes place in a world separate from the main EDF series and has been designed with a western gaming audience in mind. Players will take on the role of Closer, an elite soldier of the Earth Defense Force who fell into a coma following an epic battle with the invading aliens known as “Aggressors.” Seven years later, Closer is awakened and tasked with once again fighting off the Aggressors and their minions. Along with the alien invaders, Closer will also have to deal with a group called The Kindred Rebellion which is made up of former EDF soldiers who no longer believe in the military’s ability to win the war.

While previous EDFs had players choosing between four pre-made classes, Iron Rain will offer up several character customization options like gender, hair, height, and accessories. Along the way, players will be able to unlock several outfits to make their character even more unique including a very cool ant costume.

The names have been changed a bit, but there are still four playable classes for players to choose from, including a brand-new one that replaces the Air Raider class. Players are now equipped with Physical Augmentation Gear (PA Gear for short) and each class is based around the way players choose to set it up. Trooper is sort of your standard or introductory class soldier setting with a dodge ability. Jet Lifters can fly around the battlefield but aren’t as strong or armored as other classes. The aptly-named Heavy Striker is the tank class of the game and has an overdrive skill that allows them to deploy a barrier shield to defend their squad.

The new kid on the block though is the Prowl Rider who is equipped with an Attack on Titan-style zip-line belt. It’s not only useful for getting around and avoiding enemy attacks, but it can also be used to take control of invading aliens and use them against your enemies. Prowl Riders can also use their overdrive skill to summon a mount of their own.

While there's no Air Raider class that allows you to call in health boosts or vehicles, Iron Rain will include a new equipable item system that allows players to pick and choose a series of items to use on missions. Each item has a point value and players have a point cap to keep loadouts from being too overpowered. So maybe a player can call in a tank or mech walker to do some extra damage, but that may mean not being able to bring any health or attack boosts along for the fight.

Weapons are no longer tied to specific character classes and there's no more picking up items like weapons and armor on the battlefield. Instead of boxes of contraband, players will now accrue several types of currency. Along with your standard “gold coin” money, there are blue, yellow, and red gems to collect. Everything including weapons, accessories, and vehicles are now purchased in-between missions and each can cost any combination of the four currencies. It was nice to be able to customize my loadout in a way that wasn’t just working with whatever random weapons I’d unlocked.

If all this change still isn’t enough for EDF fans, there’s also a PvP mode being added. I got to go hands-on with a mode that puts two teams into a bug and alien filled arena and has them take out each other and their AI enemies in order to gather crystals. Those crystals then need to be deposited at certain points around the map that change after each use. The first team to get the highest score in three rounds wins the match. As each wave progresses, the enemies get tougher and there’s a heck of a lot more of them. It very much matches that enjoyable chaos that I love so much in the traditional EDF co-op mode.

I was already excited about EDF: Iron Rain, but getting a closer look at it has really whet my appetite. There are a lot of features that I have personally wanted to see in the main series that have been put into this new iteration. That includes a ton of new enemies like new mechs and types of bugs, such as a cockroach that shoots fire out its butt. All the various ways to customize character artilleries and outfits along with the new currency system are all big steps for EDF in general I feel. On top of all of this, the campaign now allows up to six players at one time, versus the limit of four in previous EDF titles, which means I can get even more of my crew together online for some bug squishing. I’ve made no effort to hide how much I adore this series, and from what I’ve seen of Iron Rain, the flames that fuel that passion are only going to be flamed by this game. Earth Defense Force: Iron Rain is set to hit the US on April 11 for the PlayStation 4.