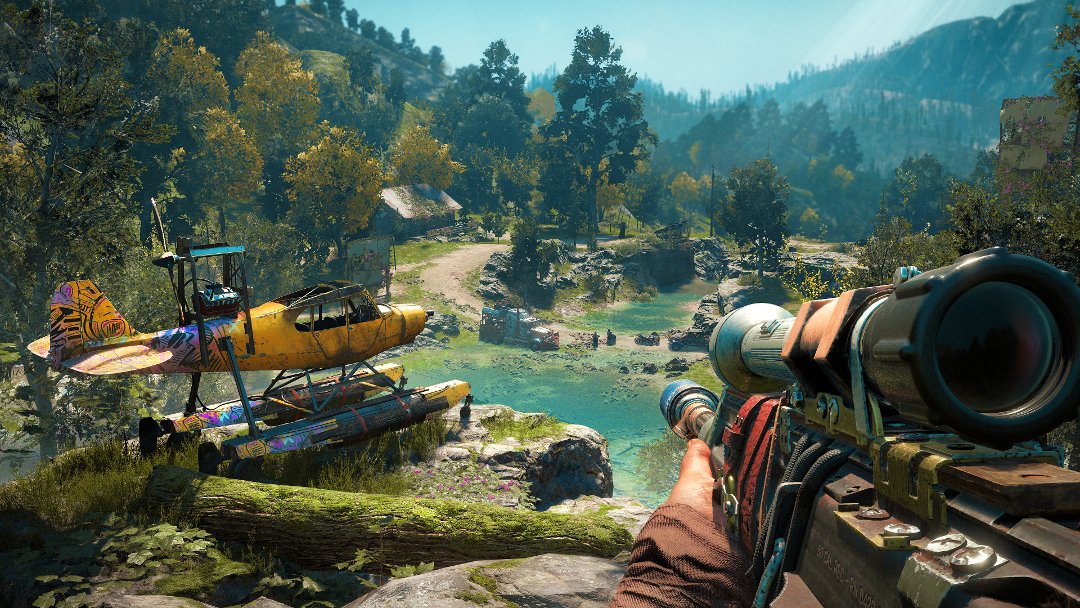 Last year when I finished my playthrough of Far Cry 5 I was left somewhat in a state of disbelief. I made it all the way through to the end and then everything got blown up in an abrupt nuclear holocaust. Of course, if I had been paying more attention to the nuanced meta-story going on in the background an apocalyptic war wouldn’t have seemed too far-fetched. The clues were everywhere, but not many, including myself, were paying attention. Not only was this some very clever storytelling on the part of Ubisoft, but it was also setting up the first ever direct sequel to a Far Cry game. Now, we find ourselves on the cusp of Far Cry New Dawn blasting its way onto consoles and PC after a very surprising reveal at last month’s Game Awards. I got a chance to go hands-on with a PS4 work-in-progress version of the game to find out what’s changed and what stayed the same in post-apocalyptic Montana.

New Dawn takes place 17 years after the events of Far Cry 5. The world has been turned to ash and been reborn. Nature has flourished, creating an even more lush and colorful environment. And the people have done their best to survive. The fine people of Hope County who were able to make it through the fallout have established a home base of their own, but their simple life has recently been threatened by a large roving gang known as the Highwaymen. The gang is led by twin sisters Lou and Mickey and they’re not really known for their compassion. These two young women, and all the other children in the game have grown up in a much different world than ours and it has definitely changed them.

In order to preserve their peaceful way of life, the people of Hope County have sought out a well-known group of freedom fighters who have liberated most of the west coast. Players will take on the role of the freedom fighters right-hand man as they attempt to save the few survivors left in Hope County.

While this is the same area of Hope County from Far Cry 5 a lot has happened to the land in New Dawn to differentiate it from its predecessor. Erosion has claimed some parts of the area and several bridges are out or have been replaced with more makeshift solutions. The most major changes to the area though seem to be the lush and colorful new flora and fauna that canvas much of the terrain and the mutated wildlife. Just about every creature has evolved to be bigger and more ferocious than before. Players will have to worry about things like packs of wolves and venomous snakes with glowing red eyes getting the best of them if they end up roaming through forests.

When it comes to gameplay mechanics, much of the FPS action is the same as previous Far Cry titles. Players can explore the map freely while searching for supplies, side-quests, or hidden treasures. Drop-in and drop-out co-op gameplay is back again. Players will still have to hunt down perk points in order to unlock items on their skill tree too.

The guns and fangs for hire mechanics are also returning with a new cast of AI characters that can be called in for assistance in combat. This time around instead of being able to call in a giant bear for backup you’ll have a giant boar at your disposal.

The big changes come in the form of a new tier-system for weapons and enemies. Basically, there are three different ranks for each to add a bit of an RPG element. Now players going into a firefight might realize they’re up against a ton of level three opponents and only have a level one pistol and a level two saw blade shooter and decide to maybe come back later with better gear. Tiered enemies essentially gain more armor and better weaponry as they go up in rank to provide a challenge that escalates as players work their way through New Dawn. The new feature may end up serving as a defacto gatekeeping system, but it’s tough to say how much it will keep players with lower tier weapons away from trying to explore.

In order to get better gear, players will have to craft it, and in order to craft better weapons, they’ll have to upgrade their main outpost. Outposts are safe-havens where players can take the salvage they’ve found and put it to good use by making new weapons on the workbench, buying new vehicles, upgrading explosives, or crafting medical supplies. Each different aspect of the main outpost can be upgraded using ethanol, which is probably the most valuable currency in the game.

Players can also expand their main outpost by finding key survivors and giving them a hand. One side mission I got to check out had me helping a “doctor” retrieve her supplies from a flooded bunker. Once I’d given her a hand, she joined my outpost and unlocked new medical upgrade options.

Outposts will also give players the opportunity to try out the new Expedition missions. By paying a helicopter pilot ethanol, players will get a chance to take on challenges across the US. The expedition mission I got to try out involved breaking into a Highwayman base to steal some documents. The drop-off point and the base were separated by huge canyon with a long bridge across it. I could’ve simply walked across the bridge, but since I had unlocked the grappling hook skill, I opted to swing my way under the bridge for a stealth approach. After grabbing the documents and fighting my way back to the rendezvous point I had to hold the point until my ride got there. It was a really refreshing fast-paced experience that I definitely found interesting and I’m very curious to see how much this plays into the final game.

While I feel like I got a pretty good look at what we can expect from Far Cry New Dawn, it seems like there’s so much more to unravel. What became of The Father and the deputy you played as in Far Cry 5? What happened to The Father’s cult? What other crazy stuff has happened to the world in the last 17 years? I’m hoping that all these questions and more will be answered when Far Cry New Dawn launches on February 15 for Xbox One, PS4, and PC.