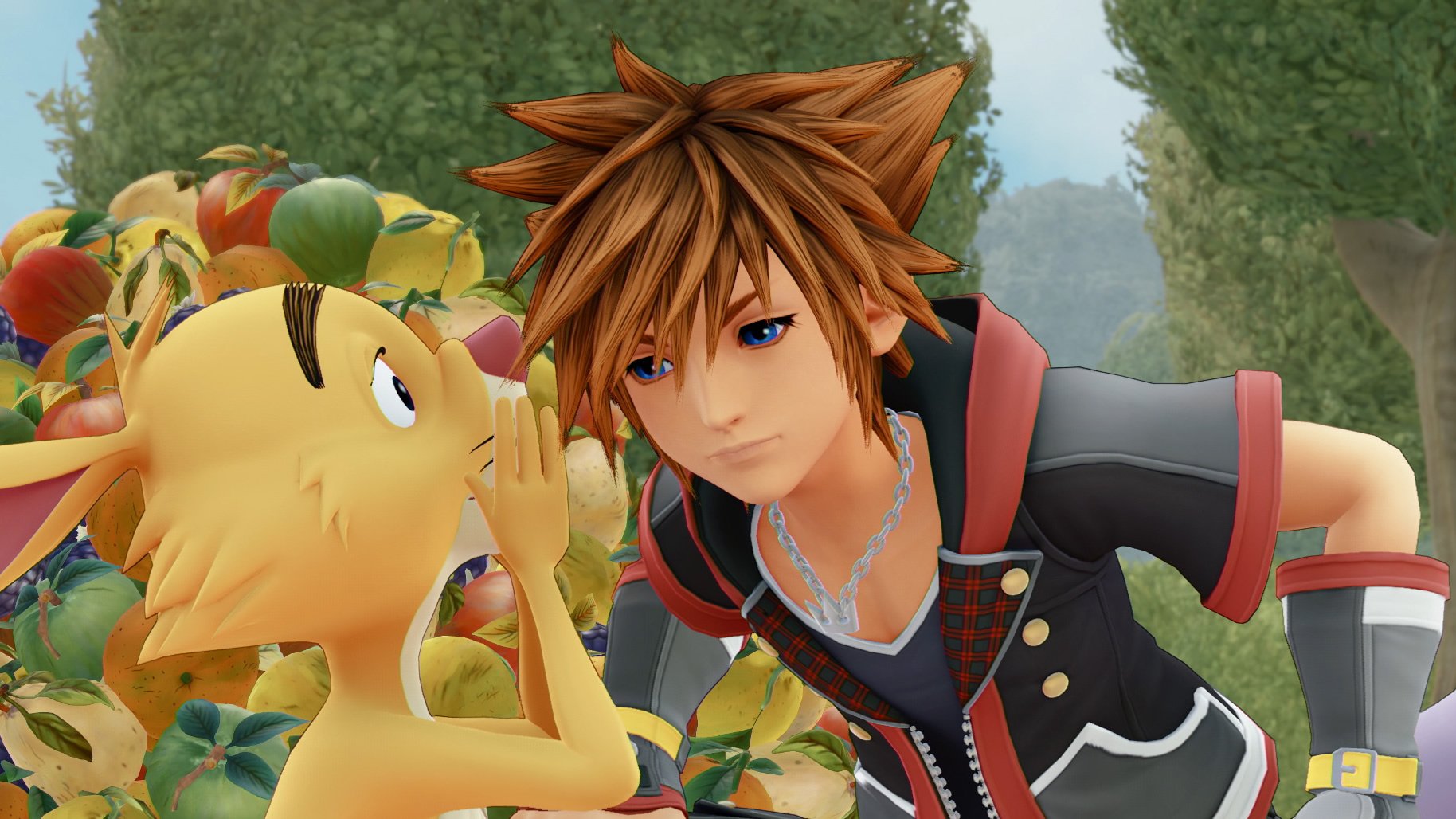 With a video game release as big as Kingdom Hearts 3, fans better believe that Disney and Square Enix have spared no expense on voice actors. The latest video game crossover adventure has been 13 years in the making, giving the developers ample time to find all of the best voice actors for any given character, with many of them returning to reprise their roles from previous Disney and Pixar film releases. Read on to discover the biggest names featured among the Kingdom Hearts 3 voice actor cast.

It's no surprise to find a number of A-list voice actors among the cast of Kingdom Hearts 3. Because Kingdom Hearts is one of the biggest crossovers in entertainment, and because Square Enix's partner Disney is a humongous name in film and TV, the game's developers had access to an incredible pool of voice talent. In many cases, the voices behind characters in Kingdom Hearts 3 are the same ones from the source media, including several returning voices from Frozen, Tangled, Big Hero 6, and the Toy Story series.

The voice of Sora in Kingdom Hearts 3 is once again provided by Haley Joel Osment, now a veteran of the voice acting industry thanks to his starring role in the series. His face will doubtless be recognizable for his involvement in films like The Sixth Sense, Forrest Gump, and A.I. Artificial Intelligence, but gamers may also recognize his voice from a recent role in NBA 2K19, where he played the part of character Zach Coleman.

The role of Donald Duck in Kingdom Hearts 3 is voiced by Tony Anselmo, who has been voicing the character since its TV debut in DTV Valentine back in 1986. In fact, based on information gleaned from Anselmo's IMDb page, there's very little that he's done outside of voicing the instantly-recognizable duck for the last 33 years. He did provide extra voices for Phineas and Ferb around 2011, but beyond that one instance, the rest of Anselmo's 69 acting credits involve voicing Donald Duck.

Goofy in Kingdom Hearts 3 is voiced by the same man who has voiced the characters for years: Kansas native actor Bill Farmer. Unlike Anselmo, who has almost exclusively voiced Donald Duck, Farmer has moved all around the worlds of movies and games. He may be best known for voicing Goofy, but he also voiced Sam in Sam and Max Hit the Road, Sylvester and Yosemite Sam in Space Jam, and a host of miscellaneous voices in Robot Chicken. His video game voice credits mainly revolve around Goofy, with Farmer providing his talents for games like Kingdom Hearts and Epic Mickey, though he's also provided voices for games like Crash Tag Team Racing and Yakuza.

The Kingdom Hearts 3 crew tapped on the talents of Illinois native actor Scott Adsit for the voice of Baymax, the same man who voices the character in the Big Hero 6 movie and TV series. Outside of other television roles in shows like 30 Rock or Moral Orel, film fans may recognize Adsit from movies like Uncle Nick, Growing Up and Other Lies, and We're the Millers. He also played The Writer in the Greatest Song in the World episode of HBO's Tenacious D miniseries.

The voice of Fred in Kingdom Hearts 3 is provided by popular funny man T.J. Miller, a Colorado-borne actor most well-known for his roles in the Deadpool movies as well as HBO series Silicon Valley. Aside from voicing Fred in Big Hero 6, he also lent his voice to roles in games like Yogi Bear, How to Train Your Dragon, and The Emoji Movie Virtual Reality eXperience.

Florida native actor Josh Gad returns to voice Olaf from the Disney film Frozen in Kingdom Hearts 3. Gad's acting resume includes quite a few hits, with acting credits in films like 21, Pixels, Jobs, She Wants Me, and The Rocker. He's also starred in a number of TV series including Back to You, American Dad, Good Vibes, Californication, 1600 Penn, The Comedians, and New Girl.

Kristen Bell returns to voice Anna from Frozen in Kingdom Hearts 3. Though her acting resume is extensive, Bell is primarily known for her work in Frozen, Forgetting Sarah Marshall, Veronica Mars, and Scream 4. Her TV credits include several massive runs on popular shows like Veronica Mars, Gossip Girl, and House of Lies, with minor recurring spots in shows like Burning Love and Heroes. Outside of Disney-produced titles, her video game credits include roles in Astro Boy: The Video Game, Disney Infinity, and the original Assassin's Creed.

Frozen's Elsa in Kingdom Hearts 3 is voiced by Idina Menzel, the same actor who voices the character in Frozen. Menzel's acting resume includes a number of video game credits based around her role in Frozen as well as TV series like Glee and Lego Frozen Northern Lights. Her film credits include Kissing Jessica Stein, The Tollbooth, Water, Rent, and Enchanted.

The voice of Kristoff in Kingdom Hearts 3 is provided by Jonathan Groff, an up-and-coming actor Disney fans will immediately recognize from his role playing the same character in Frozen. Groff has but one video game credit (for Kingdom Hearts 3), but his TV credits include roles in series like Mindhunter, O.T.P., Glee, Looking, Boss, and One Life to Live. He's also starred in a handful of films, and will be reprising his role as Kristoff in Frozen 2.

James Woods once again voices the role of Hades in Kingdom Hearts 3. The Utah-borne actor and two-time Oscar nominee is widely recognizable across both film and TV, with starring roles in movies like Straw Dogs, White House Down, Stuart Little 2, Scary Movie 2, Ghosts of Mississippi, and Salvador. His signature voice is easily picked up in a number of video games as well, including games like Scarface: The World Is Yours, Grand Theft Auto: San Andreas, and several entries in the Kingdom Hearts series.

The role of Hercules in Kingdom Hearts 3 is voiced by Tate Donovan, a New Jersey-borne actor and Primetime Emmy award winner. Film buffs may recognize his face from movies like Argo, Shooter, Blame, and Love Potion No. 9, but others may recognize his work in television in series like The Man in the High Castle, Hercules, 24: Live Another Day, Deception, Hostages, Damages, The O.C., and Friends. His primary voice acting credits are in other Disney games like Hercules, Disney's Hades Challenge, and Kingdom Hearts 2.

Jack Sparrow in Kingdom Hearts 3 is voiced by Jared Butler, one of the only voice actors on this list whose work primarily includes video game roles. Outside of acting in shorts like Judge Minty and Search/Destroy: A Strontium Dog Fan Film, Butler's video game credits include Pirates of the Caribbean: At World's End, Rango, XCOM: Enemy Unknown, Grand Theft Auto 5, and Disney Infinity 3.0.

The grizzled first mate pirate Joshamee Gibbs is voiced by Kevin McNally in Kingdom Hearts 3. Like many of the other actors featured on this list, McNally voices — or in this case, acts — the part of Gibbs in the live-action Pirates of the Caribbean movies. Recognizable from other films like Macbeth Unhinged, Bounty Killer, and Valkyrie, McNally can also be seen in TV series such as Frontiers, Underworld, Dad, Bedtime, Supernatural, The Mill, and Downton Abbey. His video game credits include voice work for Disney Infinity and Assassin's Creed 3.

Kingdom Hearts 3's version of Flynn Rider is voiced by Zachary Levi, the same actor who voiced the character in Tangled. Probably best-known for playing Chuck in the TV series of the same name, Levi has starred in a number of popular shows like Tangled: The Series, Alias Grace, Telenovela, Heroes Reborn, and Tiny Commando. Though his voice acting resume is somewhat short, Levi has worked in past games like Fallout: New Vegas and Halo: Reach.

Mother Gothel in Kingdom Hearts 3 is voiced by Donna Murphy, a New York-based actress with a number of credit film, television, and theater performances. Aside from her work in Frozen, fans may recognize her voice or likeness from TV series like Mercy Street, Hindsight, Resurrection, Made in Jersey, and Trust Me. Aside from Kingdom Hearts 3, her only other video game credit is voicing Mother Gothel in the 2010 release Disney Tangled.

The portly pink character Hamm is voiced by none other than John Ratzenberger, a long-time actor and Connecticut native best known for playing Cliff on 80s TV sitcom Cheers. Ratzenberger notably voiced Hamm in all three Toy Story movies as well as several other spin-off programs, and game fans may recognize his work from several Disney- and Pixar-based games like Cars, Up, Disney Infinity, Disney Magic Kingdoms, and LEGO The Incredibles.

Rex in Kingdom Hearts 3 is voiced by Wallace Shawn, the same New York City-borne actor who voices the character in the Toy Story movies. Most fans will recognize him as the actor playing Vizzini in The Princess Bride, but Shawn has plenty of experience in video games too, voicing characters in titles like Family Guy: Back to the Multiverse, King's Quest 2015, and LEGO The Incredibles.

The voice of Sheriff Woody Pride is provided by Jim Hanks. Perhaps most famous for being Tom Hank's younger brother, Jim Hanks has had plenty of success across movies, TV, and games, notably voicing the role of Woody from the 1996 Toy Story video game and onward. He's also appeared in TV series like Sabrina, The Teenage Witch and JAG, while also providing voices for games like Disney Infinity and LEGO The Incredibles.

What do you think of the starring voice actors and cast members of Kingdom Hearts 3? Based on the crew's total experience, it seems safe to say that the latest Disney and Square Enix crossover will uphold the series' tradition of strong voice acting talent. The game is just over a week from its January 25 release date, so be sure to keep it tuned to Shacknews' Kingdom Hearts 3 home page for all the latest news and guides.