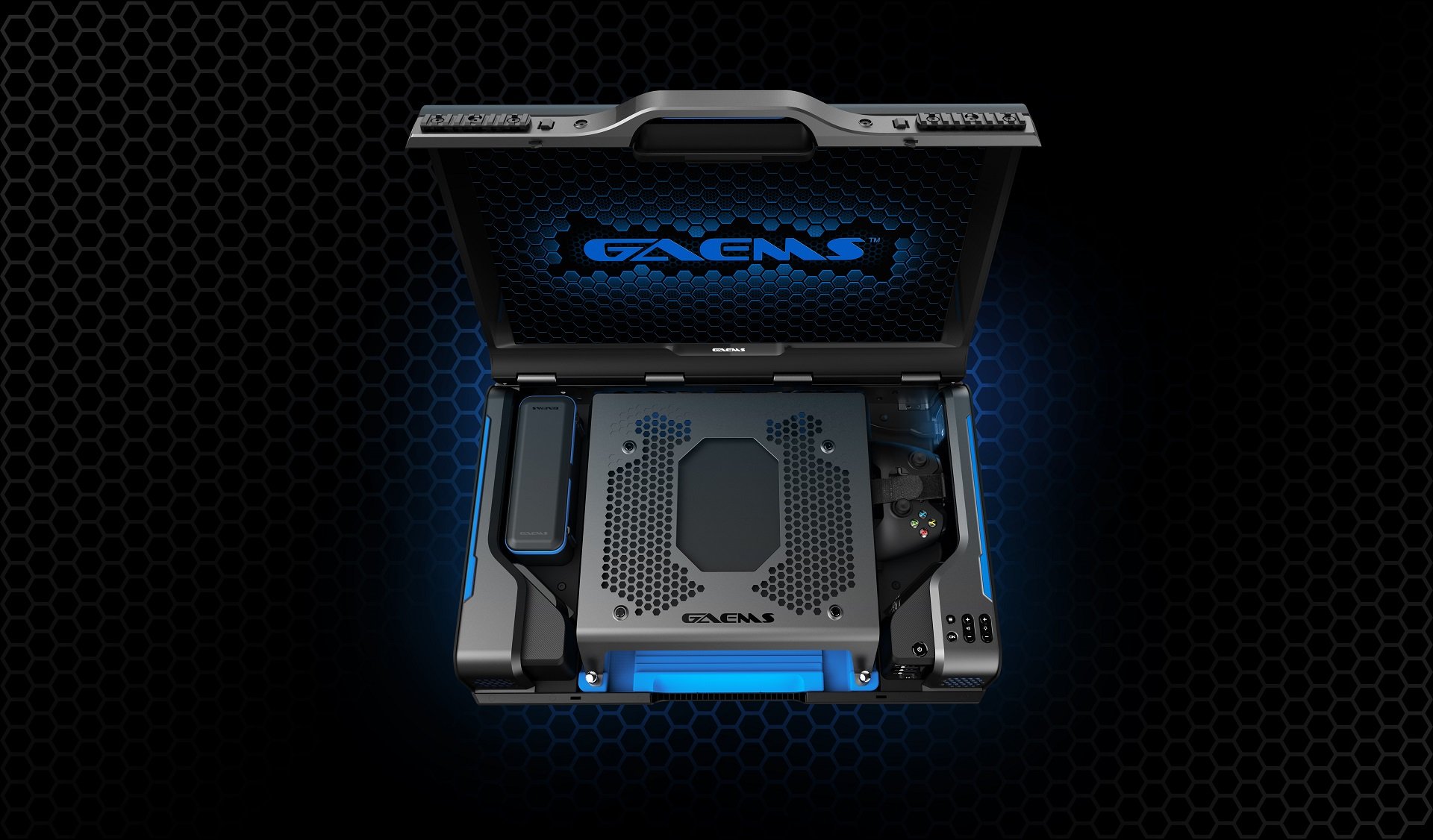 As I took the trip to this year's Consumer Electronics Show, I made sure to pack the essentials: Clothes, toiletries, laptop, and video game console. But for any borderline-obsessive video game player, packing the console is often the hardest part. After all, they can be quite sizable and require a number of attachments. (In the case of my Xbox One, I needed to reember the plug, HDMI cord, and external hard drive.) All of this was in the back of my head as I checked out this year's offerings from the folks at GAEMS, who specialize in portable gaming stations.

GAEMS brought along some of its most revered products, like the 17" Sentinel and 19" Vanguard carrying cases, each set up with a high-end IPS HD panel, audio speakers, and convenient component hookups. But what was of great interest to Shacknews this year was the newest item on display: The GAEMS Guardian Pro XP.

While the Sentinel and Vanguard went from production to retail in the span of less than a year, GAEMS has been working on the Guardian for a significantly longer period. The Guardian has been in production for four years, out of the company's desire to both create something truly high-end and also to make sure the design is just right.

The first thing to note is that the case itself is much wider than the previous models, as it now houses a 24-inch QHD panel. It houses a pair of 9W speakers, along with dual subwoofers, for a premium audio experience. Those looking to keep their sound to themselves can also take advantage of two headphone jacks, ideal for two-player games like co-op shooters or fighting games. The Guardian also forgoes the idea of velcro and opts instead for a metallic cover with removable screws, perfect for housing either the Xbox One or PlayStation 4 and their newer 4K-compatible counterparts. And the USB and HDMI connectors are backlit, to help account for dark spaces, and make connecting to external sources, like a laptop, a little easier.

While GAEMS is hoping to bring in a wide audience, it also recognizes the Guardian's potential for courting the more professional gamer. Twitch streamers who find themselves on the go and wish to continue regular broadcasts will be able to do with the Guardian. Likewise, thanks to the monitor's low latency, esports competitors can use this to get practice in between sets. Pro Street Fighter and Tekken players, in particular, will be enthralled with this setup.

But what about the esports player or average user that primarily works with their PC? What about the Counter-Strike players of the world? GAEMS is touting the ability to house a PC, though even with the space provided by the metal case, it will only be able to house certain Micro ATX PC rigs its current state. GAEMS did state that the design is not quite finalized, so there is a chance that things could change and offer up that extra space to house the average-to-smaller-sized PC.

Compared to the Sentinel and the Vanguard, the Guardian comes across as the premium edition of GAEMS' line of gaming stations. It looks to be the cream of the crop and GAEMS is certainly investing a lot of energy and capital into making this product happen. It's tough to get past its bulky size (even if the briefcase shape appeals greatly to one Asif Khan), but for the growing audience of streamers and esports competitors, the GAEMS Guardian Pro XP is definitely something to keep an eye on. GAEMS is aiming for a Spring/Summer release, though a price point is still forthcoming.

For more on this year's Consumer Electronics Show from Las Vegas, be sure to follow Shacknews' continuing CES 2019 coverage.

Horizon Zero Dawn PC impressions: The disappointing side of Decima