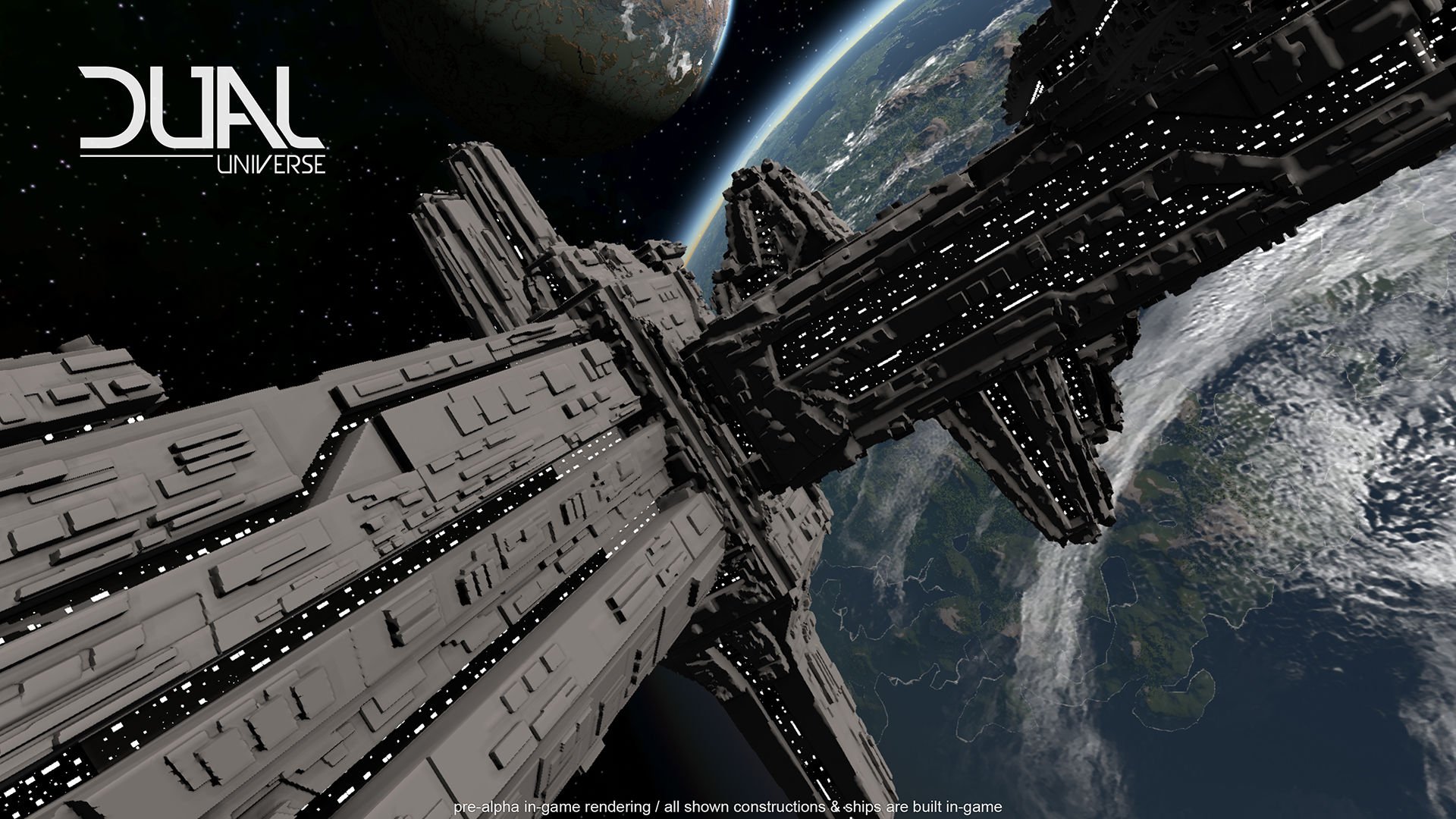 When I sat down for my Skype call with the Dual Universe devs for a hands-off demo of their pre-alpha build they started off our conversation with a quick elevator pitch of the game: “It’s basically Minecraft meets EVE Online.” If that sounds like an ambitious undertaking, well, that’s probably because it is. Dual Universe is definitely a game that is trying to give their audience a lot and then some when it comes to functionality and experience options.

Much like in No Man’s Sky, players will mine and scavenge for resources that can be turned into more useful things, like parts for a spaceship or building materials. But unlike the somewhat isolated experience that No Man’s Sky offers, players will often find themselves interacting in order to trade for items, or working together to build cool new stuff.

Players will begin their journey on the planet Alioth, an intro planet designed to help folks get their bearings. The planet is huge and the alpha build is full of new biomes and areas for players to explore. Each area of the planet is broken into hex tiles that players can stake ownership over. But before they purchase an area and take over they’ll want to build a massive territory scanner to see what materials can be gathered. Some areas in the game will have safe spaces, but Dual Universe will be a perpetual online world where things are constantly changing so claiming an area may not last forever.

Once you’ve scanned a territory it’s time to build mine shafts and hunt for materials. Players will have to dig deep to find the rarest and most valuable resources. The actual mining process involves making a sphere with the mining tool. Anything in that bubble when you release it will be mined, so players will want to time their mining right for optimum scooping. One nice feature is the ability to add stuff to the crafting queue even if you don’t have the materials to build it so that when you do it will just auto-build.

After gathering resources and building materials players can meet with each other or trade at markets for their needs. Beyond that, the sky isn’t even the limit. Players can build an insane amount of things in Dual Universe from basic items like walls and furniture to giant spaceships with even tinier spaceships inside of them.

The game has been set up for massively expansive customization and players can build using materials of their choice and make it whatever shape and size they like. So a player could build a door and connect it to a button to make it open or connect everything in a room to a central computer and control all its lighting and doors through that. There’s even a simple programming language called Lua built into the game so players can create custom computer applications. During my demo, I was shown a basic version of the game Breakout that a member of the team had built on an in-game computer.

Between mining, designing, programming, and building there’s no way one player will be able to take on every task by themselves. This is where the more EVE Online-like aspects will come in. Working with other players to expand reach and influence will be key to getting the most out of Dual Universe. So perhaps a team of miners will team up with a builder to make a ship that can get them off-planet to do some other-world excavating. If players do design or create items that might be useful for others, they’ll have the option of selling or trading their blueprints so others can use them as well, so maybe some people will end just being inventors for hire.

The actual building of items is pretty straightforward, things just sort of click together and function. To make sure key components aren’t missed when building something like a ship, there are helpers built into the crafting system to remind you what you need. For instance, maybe you added atmospheric engines to the ship but forgot about the space engines necessary to move around once off-planet. The helpers will be there to make sure you get that engine installed before attempting to get off-world.

Right now there are 13 planets overall in Dual Universe and it can take several real-world hours to get from one to the other. Players aren’t expected to keep an eye on their ship for that entire time, but they will be vulnerable even when AFK, much like in EVE. Fortunately, though the EVE comparisons stop with the trade functions and always online world, so players shouldn’t have to worry about dealing with a ton of spreadsheets.

Dual Universe is just entering its Alpha today, November 29 on PC and does not have a release date for its full version yet. Players who enjoy the world exploration and building aspects of games like Minecraft and No Man’s Sky will want to keep an eye on this ambitious project.