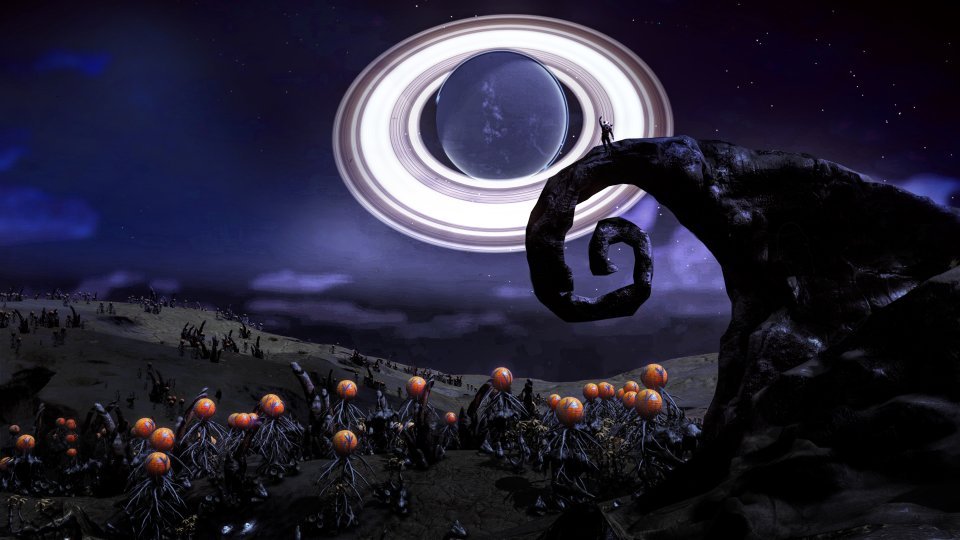 The Nightmare Before Christmas recreated by player in No Man's Sky

Despite The Nightmare Before Christmas being a terrible movie, a Redditor and his friend have taken to transforming a planet in No Man's Sky into a a Halloween-themed wonderland inspired by the festive tale. Props, though – it's actually very impressive.

Redditor Reefguy007 and friend got to work on some admittedly cool design work, using some bizarre pumpkin-like plants that made for some fantastic decor, dotting the iconic twisting hill seen on the movie poster, with jack-o'lanterns spread throughout the landscape and a full yellow moon on display in the background. It's actually a lot eerier than the original, and for limited tools within a game, they did a pretty bang-up job.

No Man's Sky players are now expected to create the obligatory "What's This?" recreation, shot for shot. See below for inspiration.

The players used a ringed planet and one of the players to dress like Jack Skellington himself, then took the shot to seal the deal on their painstaking recreation. Before you go pointing out all the differences between both photos, yes I know it's not exactly the same, and yes, these aren't really pumpkins. Just go with it. Now if only they could have chosen a movie that's actually worth watching.