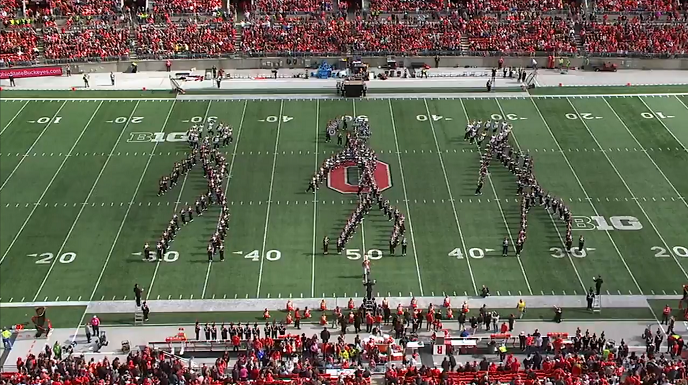 The Ohio State University Marching Band is known for some creative routines. Their half-time shows are gaining notoriety as they execute some amazing formations to recreate a bunch of cool visual nods to popular culture. This weekend, the band set their sights on the ridiculously popular Fortnite Battle Royale and one of its most iconic emotes, the floss dance. Please take a look.

why yes, yes that is @TBDBITL in flossing formation pic.twitter.com/996PLPXcqz

This choreography is even more impressive when sped up in animated gif format, as Joel Tyler discovered this weekend.

I sped it up & it’s hilarious pic.twitter.com/avTOjIHGVg

In case you are not hip to the emotes, here's what flossing looks like in Fortnite.

OSU went on to defeat Minnesota in the game, and the band will surely try to take some credit with their awesome recreation of a beloved emote from Fortnite. Some folks have wondered if Fortnite mania is on the way out with the release of Call of Duty: Black Ops 4, but it seems like there is room for both games in the battle royale genre. Not so sure we can the say the same for PUBG, which faces its own headwinds.