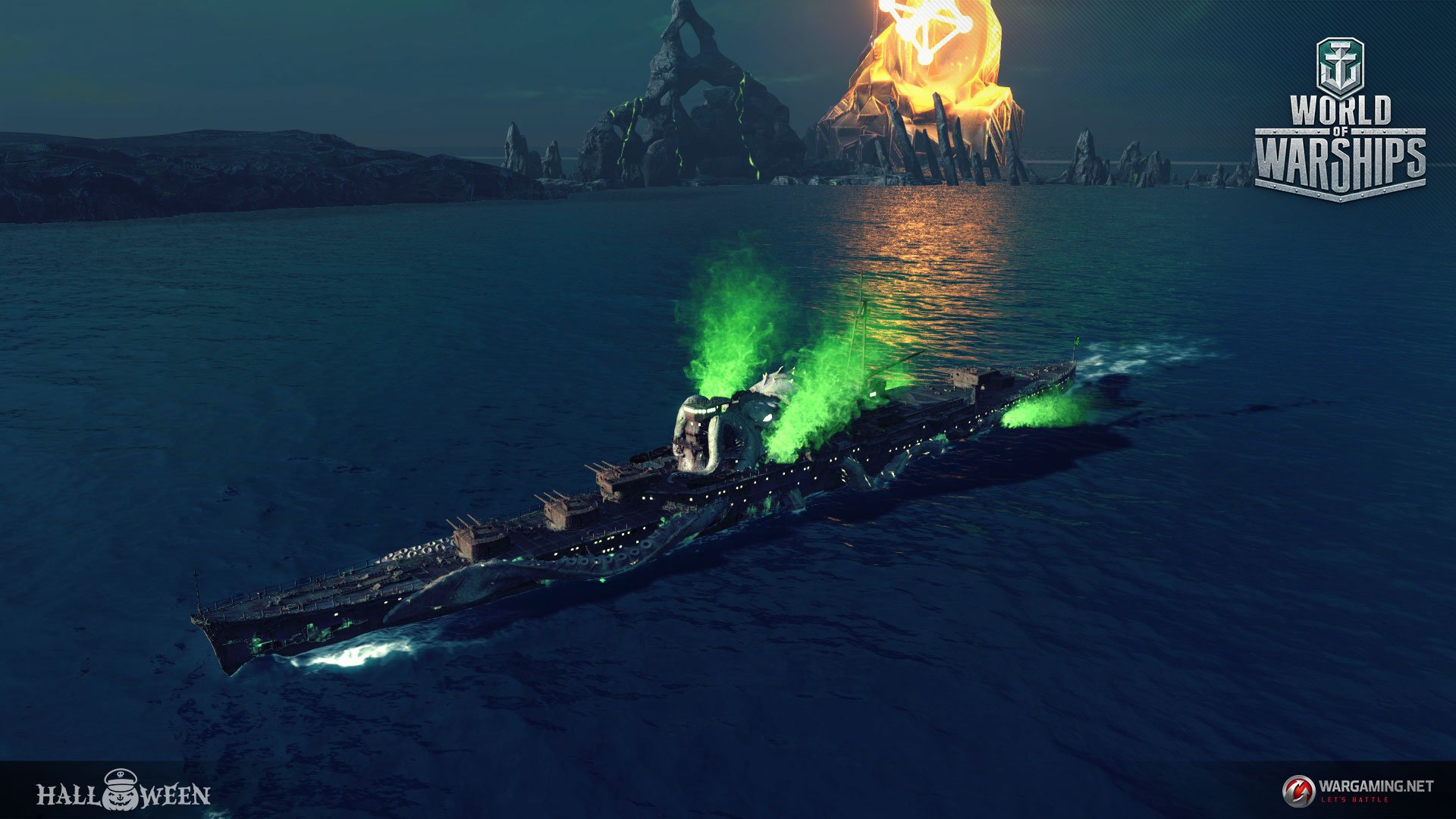 Wargaming reinvents World of Warships with subs and planes

Wargaming’s World of Warships is undergoing a makeover this year in the hopes of attracting a more mainstream audience like that of World of Tanks. Warships has 28 million registered users compared to Tanks’ 140 million. Celebrating its third birthday this week (Tanks has been around since August 2010), Warships has over 180 authentically recreated ships that saw battle during the Second World War. The latest armada is the British Destroyers, which set sail this week.

But the two biggest changes to the game will come in different forms and will be released separately this fall. This October will see the introduction of submarines into the Halloween-themed gameplay, which has a steampunk flavor rather than the World War II-centric core gameplay. The core gameplay will see one of its four main ship types, or factions, the aircraft carrier, get a complete overhaul.

Artur Plociennik, executive producer of the free-to-play game, said carriers are very different both in terms of their historical role and their gameplay. When carriers were first introduced in the game, Wargaming switched from the action-style gameplay to real-time strategy (RTS). While the rest of the game offers a third-person perspective of the ships, carriers gameplay is limited to an overhead 2D perspective because there simply wasn’t enough time to contend with that view and make the quick decisions on where to send your fighter planes across the map. The team realized this class of ships hasn’t connected with gamers like it had hoped (only 3-5% of players use it), so they decided to change things up.

“Carriers currently have too much influence over the result of the battle, both in the hands of a skilled and unskilled player,” Plociennik explained. “We want to introduce this class to more gamers.”

With the new system, which will roll out this fall, Wargaming has moved away from RTS and back to action gameplay. The player will now take direct control of the squadron of planes in real-time and target enemy ships. While there are three types of planes (torpedo bombers, dive bombers and attack planes), the player can only control one at a time (the old RTS model allowed multiple squadrons to be commandeered simultaneously).

Each squadron consists of a dozen planes but only three will detach and bomb or attack at once. Plociennik said this adds tactical depth to the gameplay because the player will take on anti-aircraft flak at a certain altitude, so getting in and out quickly is a challenge. And other planes in your squadron will be susceptible to damage or destruction, as each has its individual damage system.

“Torpedo bombers can deliver a lot of damage but can’t dodge, while dive bombers are good for starting fires on large targets, and since attack planes don’t cause much direct damage they’re better for taking out smaller targets,” Plociennik said.

“With the bombers you have a limited amount of time to drop your payload and you need to anticipate the ship’s movement with targeting,” Philip Molodkovets, live producer in charge of community on World of Warships, added.

For those players on the ocean defending against these planes, there’s now direct control over the aiming of the anti-aircraft guns through different quadrants. If aimed correctly, players can decimate an entire squadron quickly once it comes in for an attack run.

Molodkovets said that since this gameplay switch is risky, the team isn’t going to rush it. They’re testing testing stable builds, which were on display at the Saint Petersburg Studio last week.

“We’ll polish it and introduce it as sandbox option to the general audience, and if players are interested we’ll move forward,” Molodkovets added. “We hope to launch it this year if all goes well.”

Judging from the reactions from international press at the hands-on event, the odds are good that this new take on carrier gameplay will replace the more challenging and less action-oriented original design.

Submarines, which were never part of the original plans for World of Warships, are finally diving into the game. Subs will be limited to player versus environment (PvE) gameplay this October with the Halloween-themed event, but Plociennik said if players like the gameplay it could expand in the future.

“We want to make sure the Halloween experience is fun first, then we’ll look at the stats from this mode to figure out the interactions with ships and how that translates to the amount of damage on the battlefield and the agency the player has. It could just remain PvE, we honestly don’t know yet.”
The reason subs are only surfacing this Halloween is because Wargaming uses this holiday (as well as April Fool’s Day) to introduce new modes and events that shy away from the historical accuracy of the main game. And if an experiment doesn’t connect with an audience, it’s no big deal.
“The core sub experience was inspired by actual accounts of WWII sub warfare, as well as Hollywiood cult classic films like Das Boot,” Molodkovets said. “We want the player to experience the anticipation, fear and satisfaction of being a silent stalker.”

From a gameplay perspective, subs have lower speeds and are more vulnerable to attack. Their only defense is concealment. Also, since torpedoes are only located on the fore and aft, positioning is important to perform a successful stealth attack while in periscope mode.

“You need to know your fleet’s and the enemy fleet’s surroundings at all times,” Plociennik said. “If you’re spotted, you’re pretty much dead. At the same time, your prey will have a hard time detecting you when submerged and must be on guard to dodge your attack.”

Molodkovets said the most thrilling part of sub warfare is depth. Players can freely move between surface, periscope and submerged depths. But oxygen is at a premium (just like in WWII), so a bar and timer will tell you how long you can stay underwater. Oxygen is also consumed quicker whenever you fire torpedoes.

Plociennik said this vertical dimension is also crucial for interacting with the main counter to subs – depth charges. They are launched from surface ships and can be detonated either when striking a sub or more frequently at random depths. He added that maneuvering around them in 3D is critical to avoid detection and death.

There are a variety of subs playable in the Halloween event. The key differentiators are size, speed, rate of turn and placement of torpedo bays (in aft and bow). While these steampunk submarines are designed for more arcade-style gameplay, players need to manage priorities with which tubes to launch torpedoes from (there’s a dedicated loader), positioning of the sub (depth and angle) and oxygen consumption.

“The concept is of a deadly, stealthy hitman who relies upon perfect planning and nerves of steel to attack,” Molodkovets said. “I’m pretty sure when we announce this to players, they’ll love subs.”

This class of vehicles, much like the carrier planes, offers something completely different to the gameplay experience.