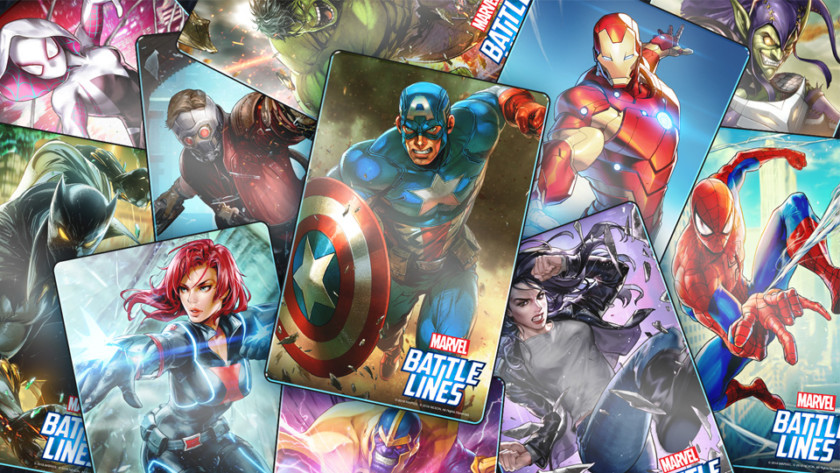 Marvel Battle Lines is an upcoming mobile strategic card battling game that’s set to feature a plethora of familiar heroes and villains from the well-known comic book and film franchises. I got a chance earlier this week to sit down with an in-progress build on an Android-powered tablet and take a spin at assembling some Avengers.

The game’s plot revolves around Red Skull and his army of Hydra soldiers attempting to steal the cosmic cube and harnessing its power for himself. However, the Skull’s plan is foiled when the cube is shattered into tiny pieces and spread across the globe. It’s now up to players to take on the role of their favorite Marvel champions, reassemble the cube, and save the day. As pieces of the cube are collected new characters are unlocked and their cards are added to a player’s collection. 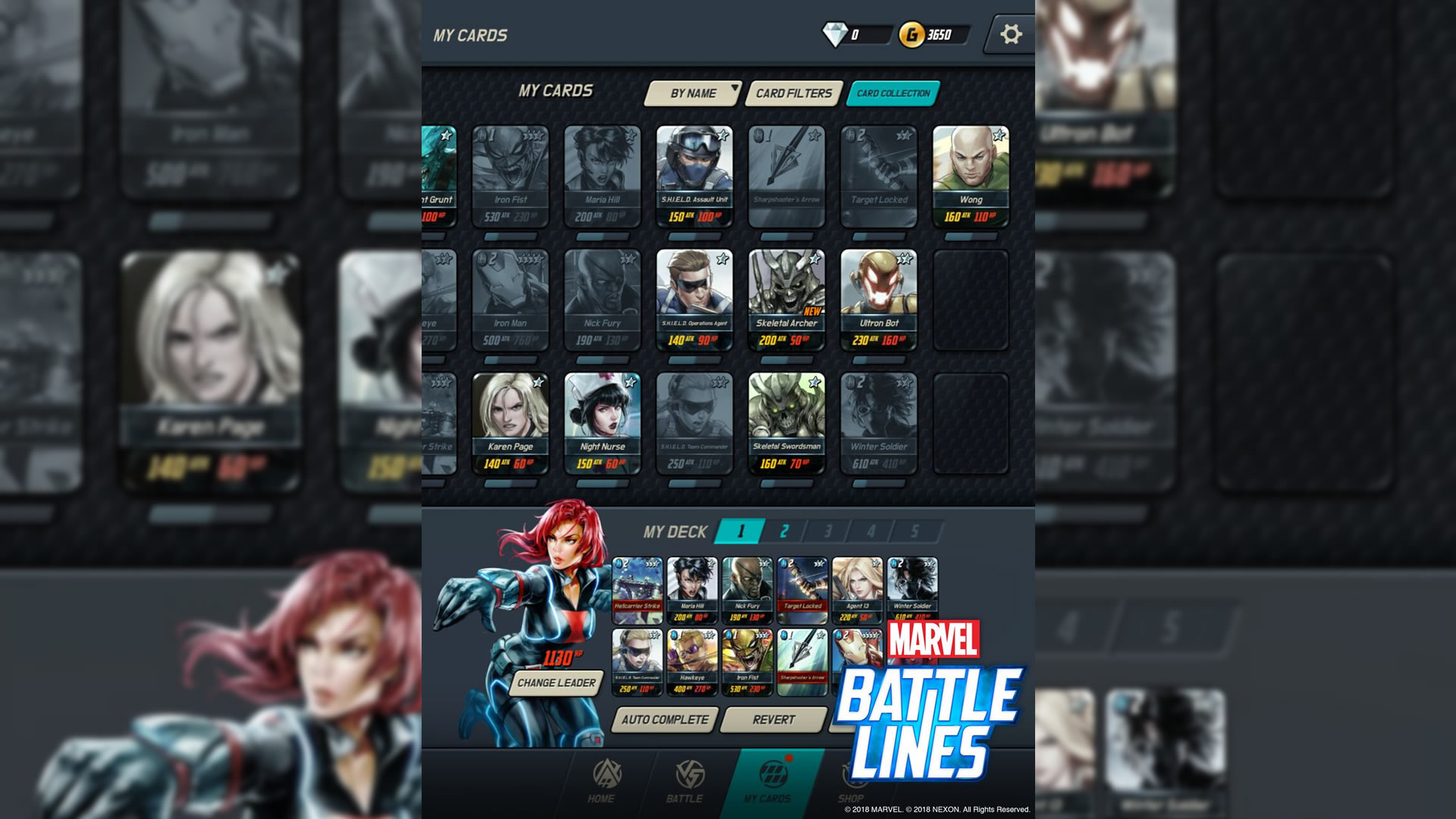 Before going into battle, players will make up a deck consisting of twelve cards and pick from a roster of deck leaders that may add their own twists to . Each player can keep up to 5 customized decks at the ready at any given time. The Cards in the deck are made up of characters the player has collected as well as action cards.

Combat itself takes place on a 3x4 square grid that players and their opponents can lay down character cards on. As the game progresses and the grid fills up, cosmic fragments will appear on random empty spaces. These fragments can be collected by laying down a character card and once a player has enough of them, they can be used to summon more powerful heroes or use action cards. 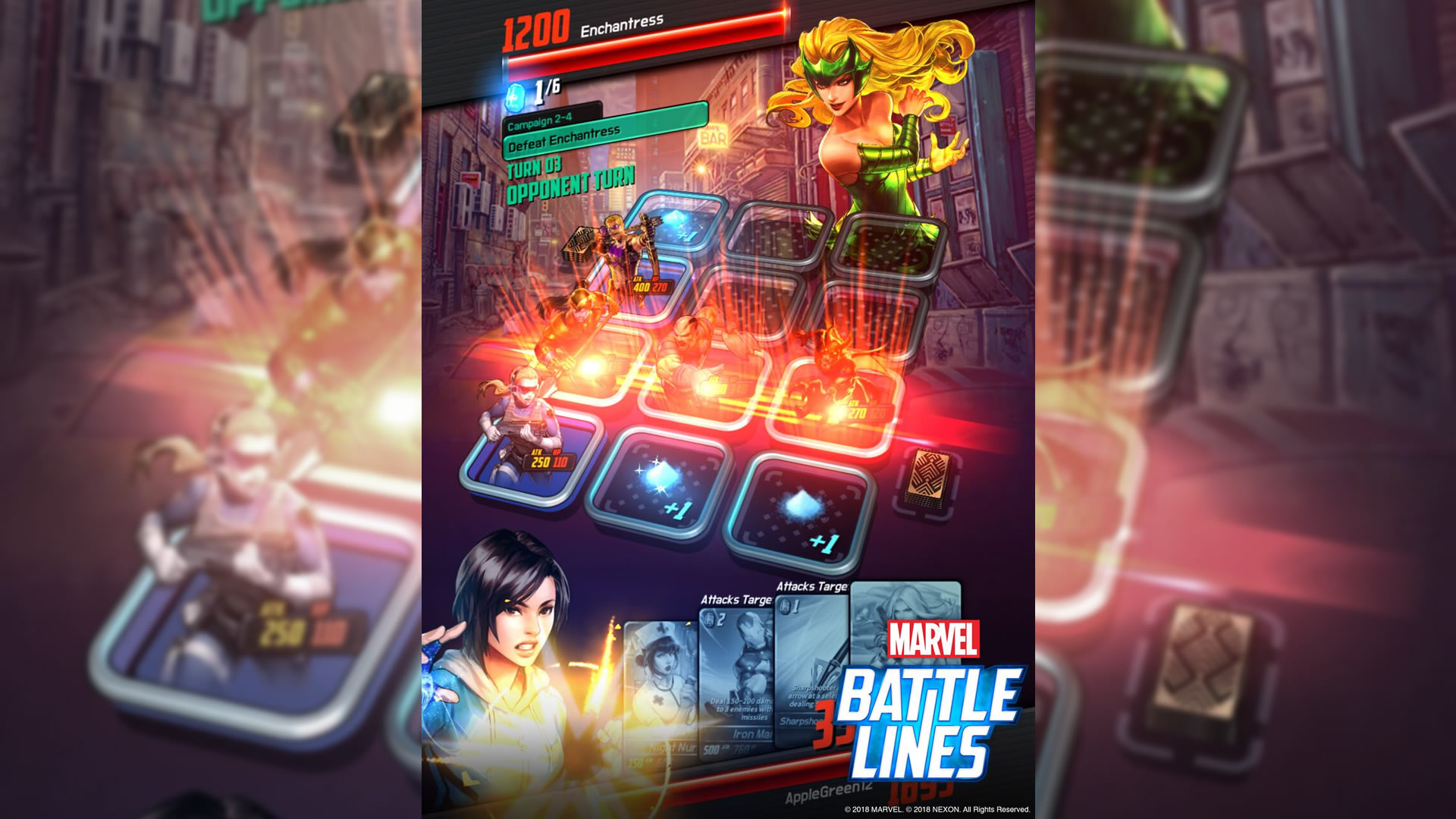 Character cards can range from a standard shield agent like Maria Hill or Phil Coulson, who just have health and attack stats, to your upper echelon supes like Capt. America and Iron Man. Overall who have special abilities like targeting the three closest enemies or attack all adjacent enemies when spawned. Ability cards are a one-time use and don’t get shuffled back into the deck afterward, they’re usually based off iconic heroes weaponry or attacks, like a specialty arrow from Hawkeye’s arsenal. Overall, there are 200 cards that run the gamut from friendly neighborhood Spider-Man’s to fan favorite Squirrel Girls.

A round begins with a player drawing up to their four card hand maximum. Before putting anything down on the table or using an action card, they’ll be able to discard and redraw any number of cards or their full hand once. After selecting what cards to keep in their hands, players can then execute an action card before placing their hero card on the board. Players will have to use some tic-tac-toe strategy in order to figure out where to place cards since direct damage to a team’s deck handler is caused by creating three to four-in-a-row patterns called “Battle Lines” on the game board itself. Heroes can take out enemy grunts and move to their spaces in order to create these battle line attacks as well. Once the battle line is executed, all the heroes involved are removed from the board and shuffled back into the deck.

Along with the standard story mode, players will be able to compete against friends, practice against AI, and take on a more puzzle-like challenge mode. Challenge mode will present several scenarios that offer progressively more complex solutions and come with their own set of three bonus objectives like taking out an opponent with one battle line attack, or only placing a single hero in a match, to not using any action cards.

While players will be able to complete their 200 card collections by playing through the story mode, they’ll also be able to purchase booster packs to speed up the master deck building process if they so choose. The cards themselves feature some fantastic artwork that takes me back to the days of the Marvel Masterpiece collector cards I used to collect when I was a kid. And the overall roster’s range of characters is definitely chock-full of Marvel history both obscure and mainstream.

At this time Marvel Battle Lines doesn’t have a solid release date, but fans should expect to see a launch at some point during 2018 on Android and iPhone mobile devices. Interested parties can sign up for pre-registration now and will get a Doctor Strange Super Hero card as well as 5,000 in-game gold for doing so.

Marvel's Guardians of the Galaxy game revealed by Square Enix, releases this October

Valorant has a mobile version in development