With the Overwatch League regular season complete, there's one more piece of business to attend to before moving into the playoffs. That's the Stage 4 Playoffs. It came down to the best team in the League against the team who went in with the perfect Stage record, as the New York Excelsior faced off with the Los Angeles Valiant. But it's the team from Los Angeles that completes the perfect Stage 4 and comes away the Stage 4 Champions.

The series started with the Valiant expressing their dominance, completely shutting down the Excelsior's offense, thanks largely to Terence "Soon" Tarlier's Widowmaker. Even with Soon stumbling onto a Junkrat trap at the start of the Valiant's offensive set, Los Angeles had little trouble getting the single point they needed, giving New York its first loss of the season on Dorado.

Game 2 went to Hanamura, which led to a brief Tracer duel between Soon and Jong-ryeol "Saebyeolbe" Park. That didn't last long before both players switched to Widowmaker, where Soon quickly picked his foe off and taunted his corpse from afar. But the Valiant weren't able to penetrate the XL defense and New York cruised to a Game 2 victory.

Game 3 in Oasis saw Pine go to work with Widowmaker, picking off everyone from Soon's Widowmaker to Brady "Agilities" Girardi's Pharah. But Agilities and Soon were able to bounce back in time to help the Valiant secure the first point in Overtime. The next round saw the Valiant hold the point again and the team was able to hold off New York's last-second push behind Agilities' Pharah and Indy "Space" Halpern's D.Va to go up 2-1 in the series.

Game 4 went to Blizzard World and the Valiant smelled blood. They shut out the XL push to startt, which means they simply needed to capture the first point to win. The Valiant put themselves in a great position when Space scored a key kill with Roadhog by hooking Hae-seong "Libero" Kim. The rest of the XL were in tatters, as the Valiant easily capped the point to win the series and the Stage 4 Finals. 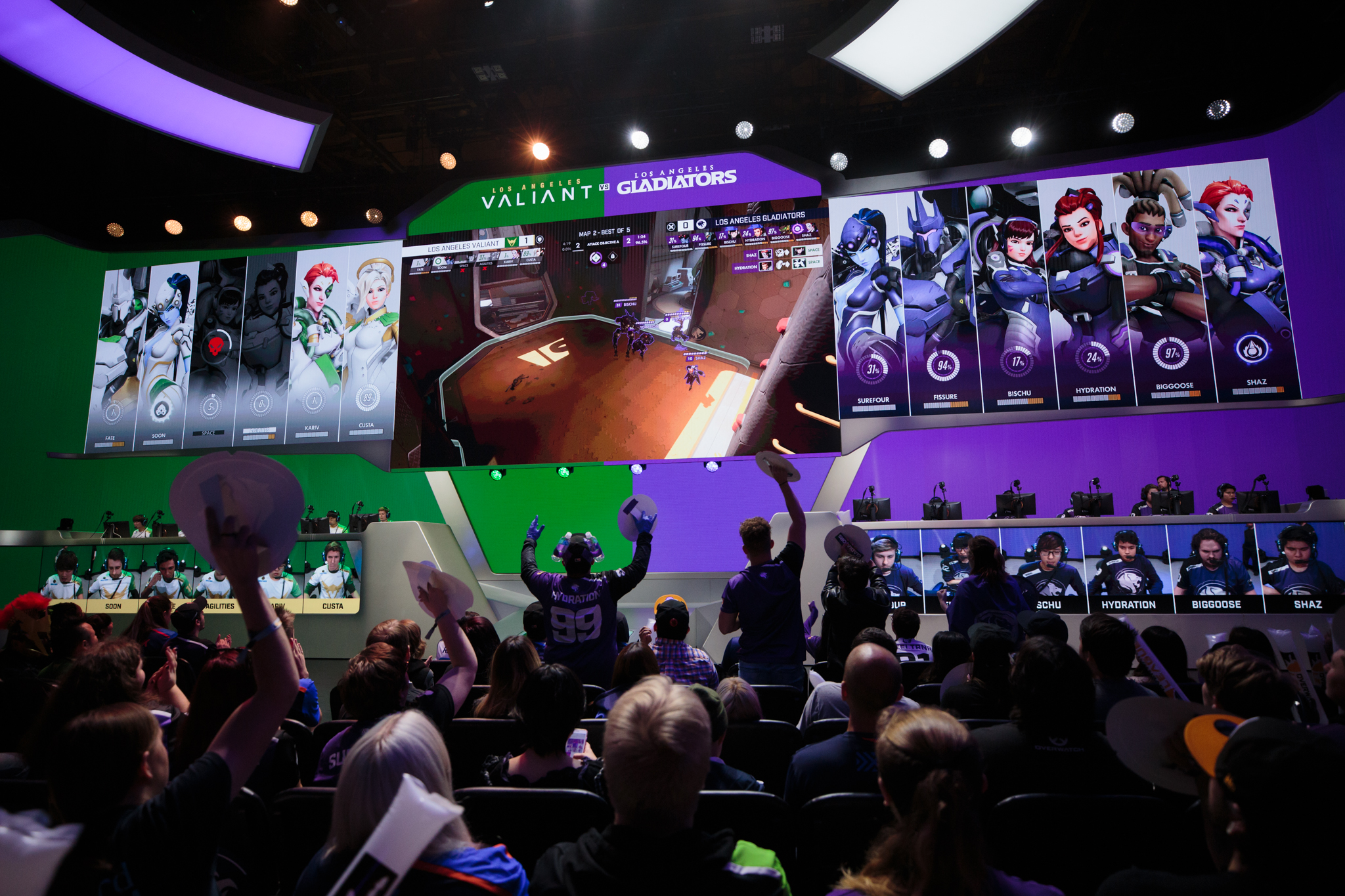 The day began with another Battle of Los Angeles, albeit one with much higher stakes this time around. The Valiant wasted no time getting an advantage on the Gladiators, dominating Gibraltar and holding them to zero points.

The Gladiators quickly recovered on Horizon Lunar Colony behind the tank play of Chan-hyung "Fissure" Baek's Reinhardt and Aaron "Bischu" Kim's D.Va. The Valiant pushed forward, but couldn't get past Fissure's Winston, who kept them off the first control point completely in the final seconds. The Gladiators continued to assert themselves on Lijiang Tower, as Lane "Surefour" Roberts put an end to a potential Valiant push by picking off Custa's Mercy. The Valiant rebounded on King's Row, warding off a Gladiators push in order to tie the series at two a piece, leading to a critical Game 5 on Dorado.

The Gladiators managed to ward off that initial Valiant push to open Game 5, holding them to two points. But the Gladiators needed to score points themselves and Soon's Widowmaker made sure that wasn't in the cards. Things went from bad to worse after Fissure's Reinhardt went down. Agilities' Brigitte wrapped the series up with a Rally Ultimate, mopping up the rest of the Gladiators and punching the Valiant's ticket to the Stage 4 Finals.

The second game saw the New York Excelsior take on the resurgent Dallas Fuel. The Fuel came out firing on offense right out of the gate on Gibraltar, but it was all Excelsior from there. New York easily took Gibraltar on offense and held the fuel from there, easily taking the first game there and the second game on Horizon Lunar Colony just minutes later.

The Fuel tried to hang with what brought them to the dance, playing on the strength of top Brigitte player Pongphop "Mickie" Rattanasangchod. Mickie did his job, preventing the New York players from reaching the point, getting Rallies quickly and often. The Fuel took the third map, completely shutting out the Excelsior. Their momentum continued through King's Row, as Brandon "Seagull" Larned cleared a path for the Fuel to take the payload to the finish line. With the XL on offense, Libero gambled by using Hanzo's Ultimate through the wall leading to the payload, but it paid off, as it scattered the Fuel just enough to keep New York in the fight. But it was Mickie, once again, who proved to be the immovable object, as he helped hold New York and push the series to Game 5 on Dorado.

Game 5 started with the Fuel making their offensive push, but getting stopped just before the second point. The Excelsior just needed two points to advance and they were able to get it, finally getting past Mickie behind a double Self-Destruct kill from Meko.

For their victory, the Los Angeles Valiant take home $100,000, while the New York Excelsior pick up $25,000. Next, the Overwatch League takes a long break, now that the regular season is over. Both the Excelsior and the Valiant will get a first-round bye, having finished at the top of their respective divisions. The third through sixth seeds will begin play on July 11, as the Overwatch League marches to the Grand Finals on Saturday, July 28 from the Barclays Center in Brooklyn, NY.