The original State of Decay was a rough, yet fun community-focused zombie survival game that dropped players into the thick of a post-apocalyptic town and allowed them to implement their ideas on how best to survive the shambling hordes. State of Decay 2 isn’t an attempt to break the mold, but merely a shot at enhancing a solid foundation while injecting online multiplayer. Despite a host of bugs, glitches, and poor design decisions, State of Decay 2 provides an addictive routine where you’re always just one more supply run away from the putting the controller down. 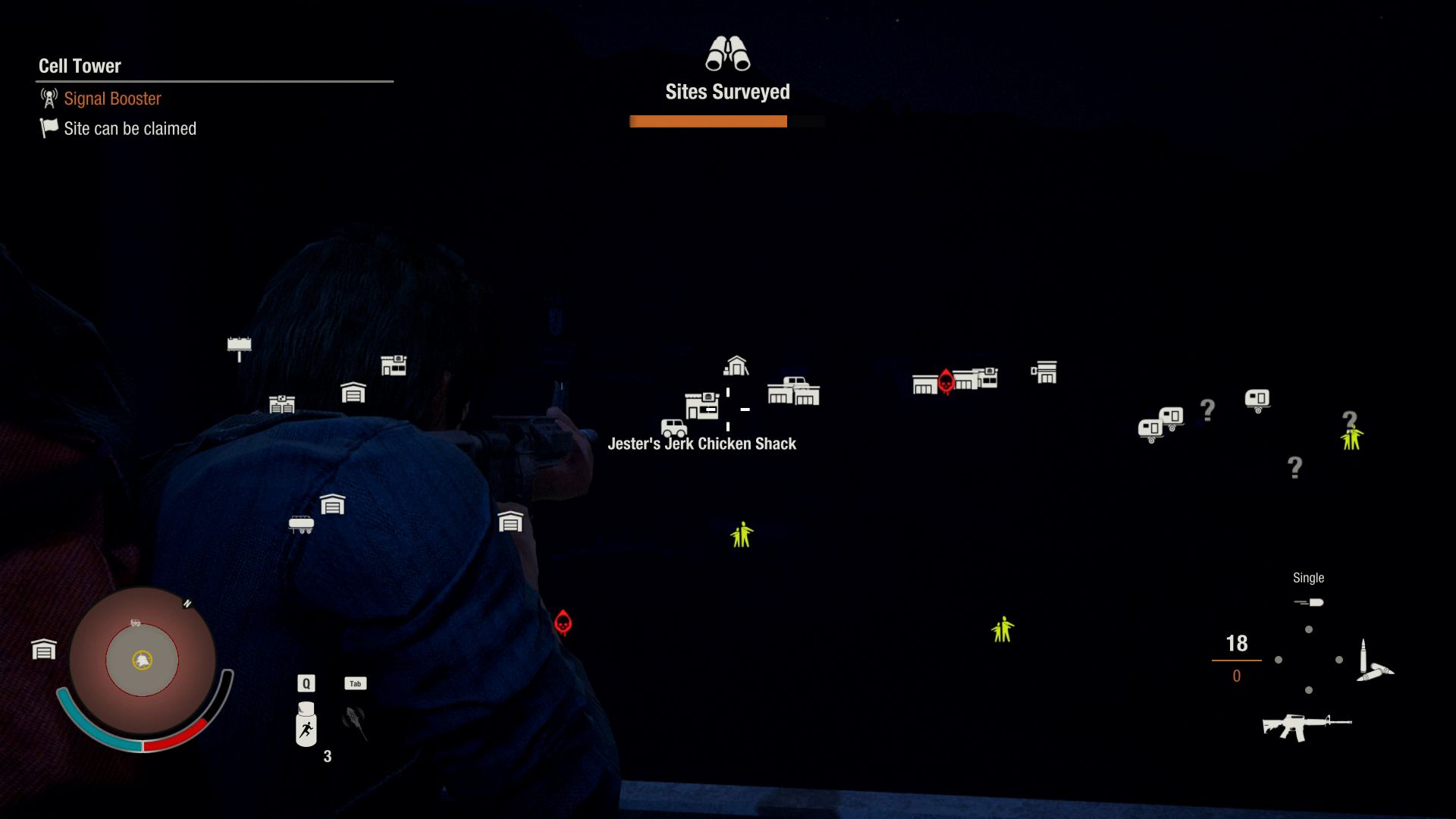 The foundation of the State of Decay 2 experience is community survival. I started off with a small crew in a small base and had the freedom to recruit new members, build structures within the home, or move to other bases. The ultimate goal is to clear the map of plague hearts and the journey through this main objective is an engaging and delicate dance between collecting resources, managing crew morale, building up the base, helping other crews on the map, and taking down the growingly difficult plague hearts.

The extent of my routine was apparent early and there's a lot of repetition, but the RPG progression of the individual survivors made the repetition compelling. Survivors are a resource like any other that you gather, but you can shape them to fit your playstyle and home base aspirations.

The zombies are expectedly grotesque, especially the variant plague zombies, with their pulsing and crawling skin. Assets, from run-down buildings to trailers to rusting vehicles, all have solid textures. Vehicles specifically showed most of the visual flair, deteriorating over time and gathering smears of blood as I ran over zombies. Speaking of vehicular zombie-slaughter, that’s a practice I learned to limit. Survivors can only carry so much and, in an effort to maximize the efficiency of each run for resources or to clear infestations, trunk space is priceless. The frustratingly limited inventory management, which prevents you from easily passing items from one survivor to another, makes trunk space even more important unless you want to burn time dropping items to pass along.

Light is a major key in State of Decay 2 as well and the design team knocked it out of the park in this regard. is exceptionally dangerous, especially when walking or driving through areas you’re not familiar with. The view distance is poor even with your vehicle’s lights on. Furthermore, the game’s different towns have no power for the most part so building interiors are harrowing as well, even during the day. My survivors all come equipped with a chest light, but the small circle of illumination still kept me on my toes. 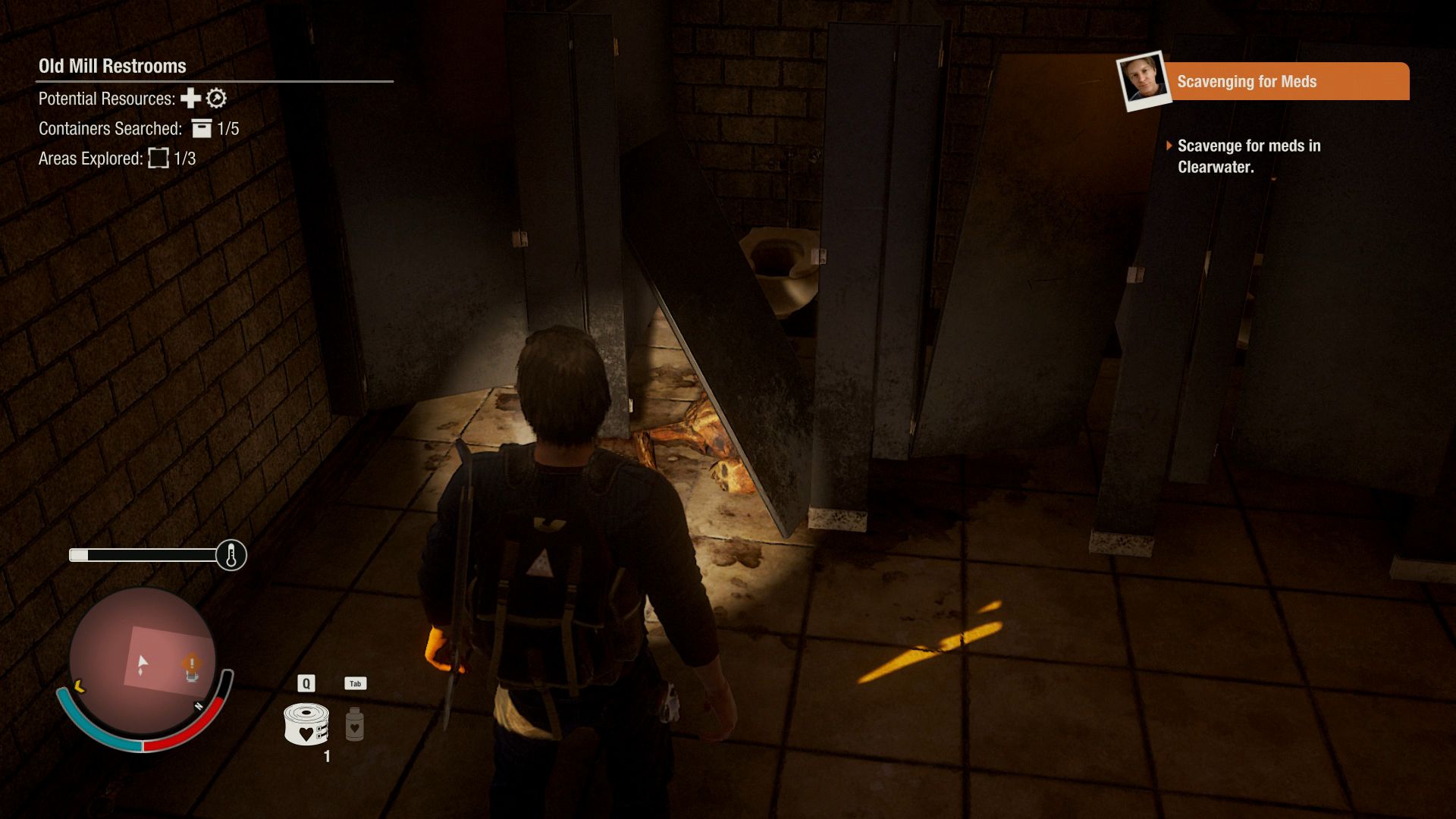 If the plague zombie’s crawling skin was peak visual creep, the yell of the screamer variant serves that purpose aurally. Sound design was, overall, good. Sound cues serve many purposes, ranging from the call for help from a stranger to the distinct squeal of unique zombie variants

Regarding sound, the games mini-map gives off a circular pulse for every act. Whether I was rummaging through a fridge, starting the car, or a zombie is banging on one of the entrances to my base, there was an indication on the map to let it be known how far that sound is ringing out. Of course, every one of these noises can attract the attention of enemies and that either ruined a run while away from my base or was used to my advantage to distract. 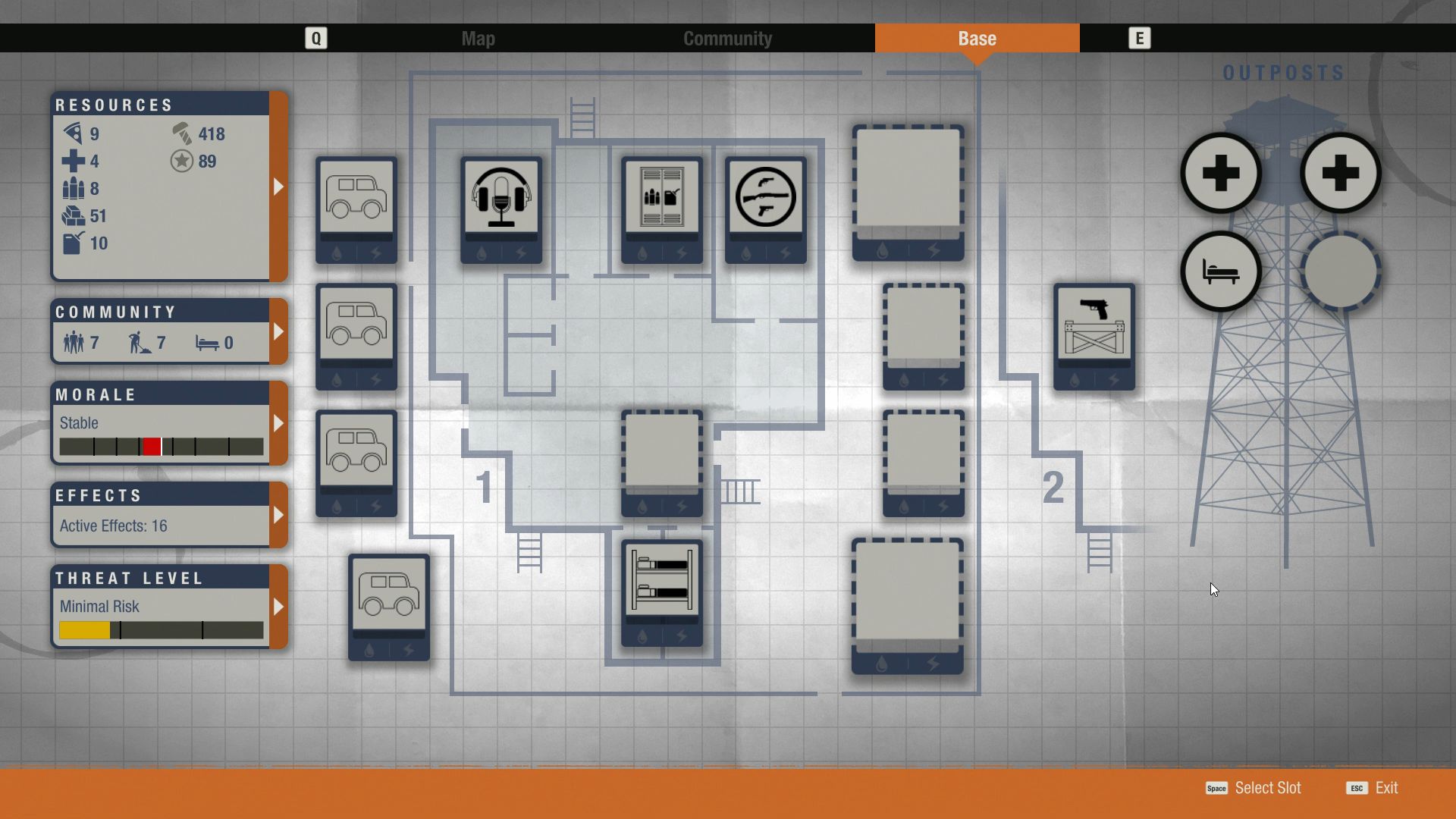 There were rarely ever moments where I felt the sound effects or cues screwed up my experience, but graphical glitches and bugs regularly tossed my planning right down the drain. A careful drive could be ruined by some objects that rendered late or by sketchy collision detection. I was also attacked through closed doors and walls, much to my annoyance. Also, a couple design decisions were troublesome. Tall metal fences can’t be knocked down and neither can short metal fences, but the later can toss your vehicle many feet into the air or allow you halfway over them only to leave your vehicle spinning tires uselessly.

Driving around feels weighty and results in a satisfying thud when you run over the many zombie pedestrians. The various vehicles control differently from each other and that played a part in what type of run away from base I’d make. My faster police car, for example, could get me to objectives and survivors but didn’t have the trunk space for efficient resource grabbing. 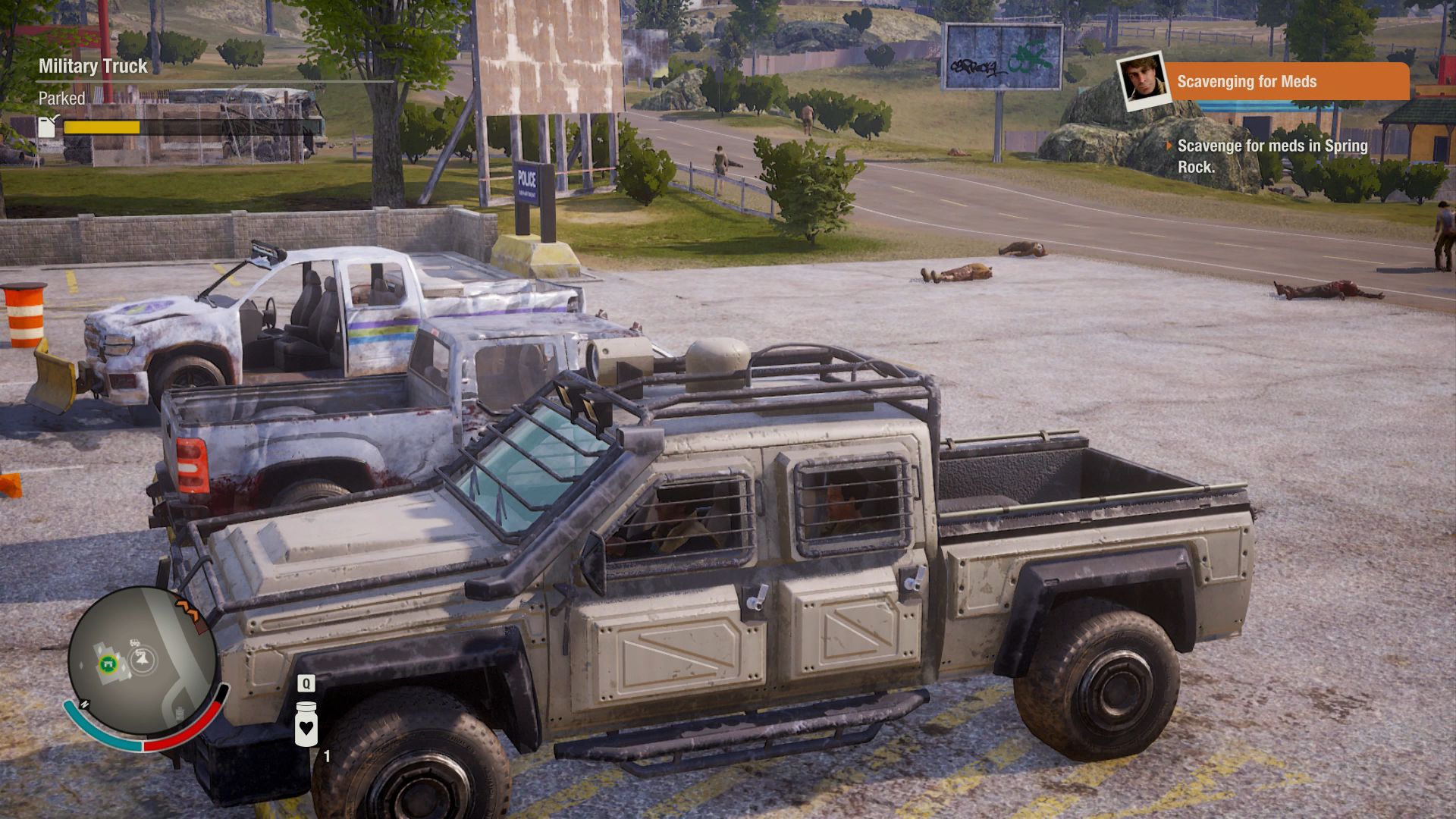 Moving around on foot and the combat  largely solid. There’s a delay in your first attack that feels like it artificially makes things difficult when facing large groups, but the dodge button helps counter it.

Online multiplayer is something I felt was missing from the first State of Decay and the sequel delivers the goods. I teamed up with a friend by taking one of the survivors from my own community, going into the friend’s, and helping him gather resources and fight the zombie plague. Resource gathering is the foundation of State of Decay 2 and the developers balanced out the process for online multiplayer by setting claims on the search points for each player. For example, when entering a warehouse, roughly 30% of the points in the space can be searched by me, the guest. The rest is reserved for the host, but he was able to drop items that he wanted me to hold on to. Once the session was done, I resources for my own community. 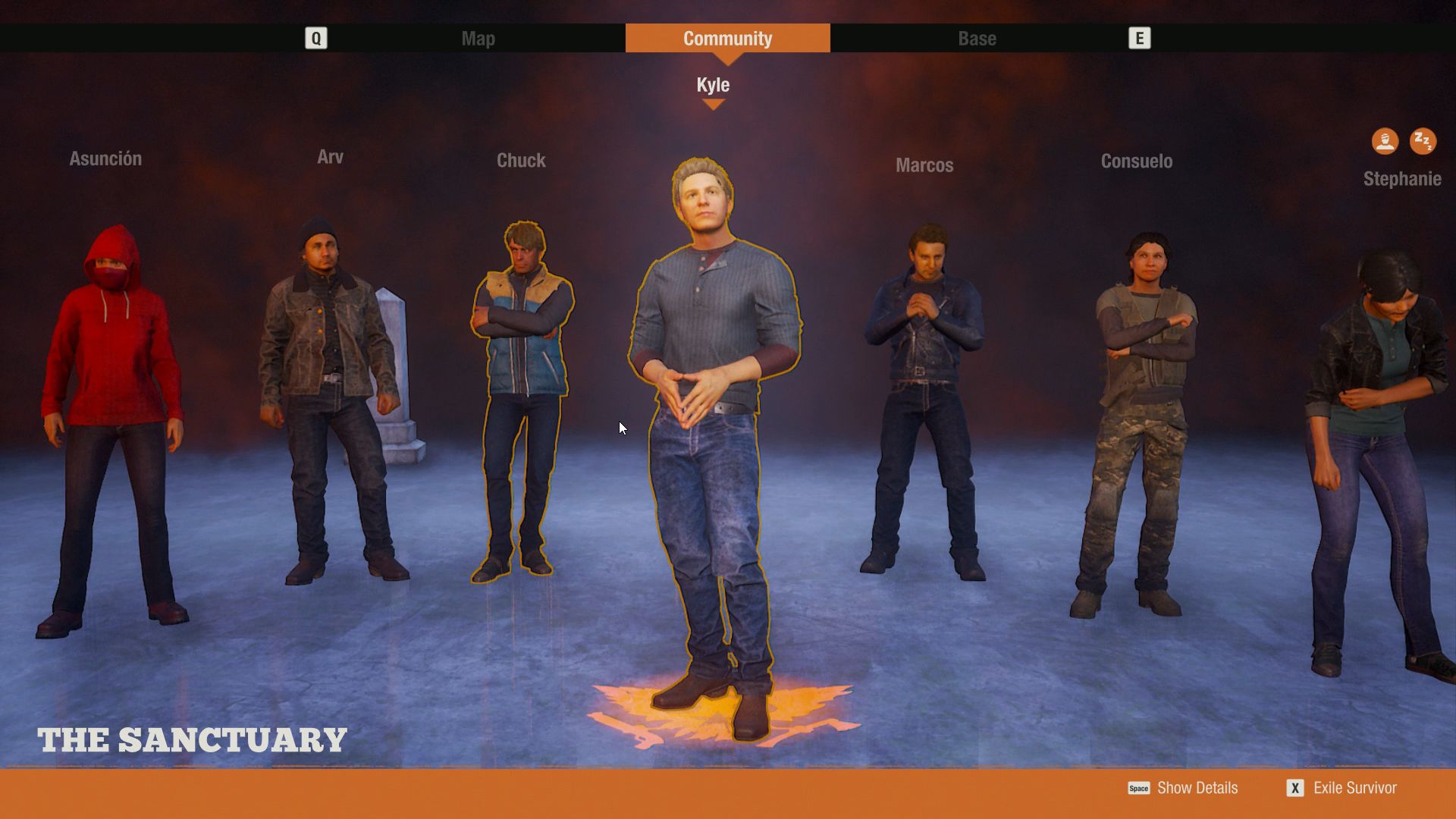 Overall, State of Decay 2 feels like a game that should have a home in the game preview section of the Xbox library. The community building is fun enough to engage my zombie survival fantasies but it’s held back by a consistent slew of bugs. Throughout my experience, my military truck constantly flickered, my player regularly fell halfway into the ground, companions would entirely disappear when I switched between them while away from base, and there was one bug I experienced twice that made my UI disappear and it seemed like any progress I made past that point was not recorded.

State of Decay 2 is repetitive, but fun when it works. When it doesn’t, you'd be forgiven for a few rage quits. In a game where any misstep can result in losing an important survivor for good, to have this happen not due to my own mistakes, but a bug or glitch, is frustrating. The RPG progression of survivors mixed in with the community building makes the repetitive structure work and rewards players that wish to continue cultivating new communities.  The game comes at half the price of most high-profile releases or as part of the Game Pass library and there's plenty bang for your buck. Hopefully, the developers will continue to iron out the game's fixable issues over time

review is based on a code provided by the publisher. State of Decay 2 is available digitally via individual purchase for $29.99 or as part of the Xbox Game Pass service on May 22. The game has been rated M by the ESRB.