How To Use The Fortnite Replay Tool

There have been a lot of interesting new changes and mechanics introduced in the latest Fortnite update version 3.5, but aside from the game's recently-delayed 50v50 V2 Limited Time gameplay mode, players will likely be most interested to learn more about the fresh new Replay Tool. Likely meant to help foster players' imaginations with regard to sharing some of their favorite in-game moments, the Fortnite Replay Tool is a simple way for players to cut together clips of their favorite Fortnite match moments.

Making use of the new Fortnite Replay Tool couldn't be more simple. In a nutshell, the replay mode records all of the user's matches up to a limit, providing those matches have taken place after the recent v3.5 update. Once the match has concluded, players can load up the Replay Tool and watch back over the gameplay session.

Once loaded via the game's Career tab from the home screen, the Replay Tool offers several different options for playback, including complete control over given camera angles and even an option to slow down or speed up specific parts of the clip. Several different visual options are also available, including settings for aperture and focal distance, and camera modes tied to various Drone settings allow players to become their vary own video game clip cinematographers.

Aside from camera and other visual-oriented controls, players can also enable the likes of player outlines and name plates in order to give a clearer direction of the upcoming action. For a closer look at each individual tool, here's a full breakdown of the different options pulled straight from the Epic Games website: 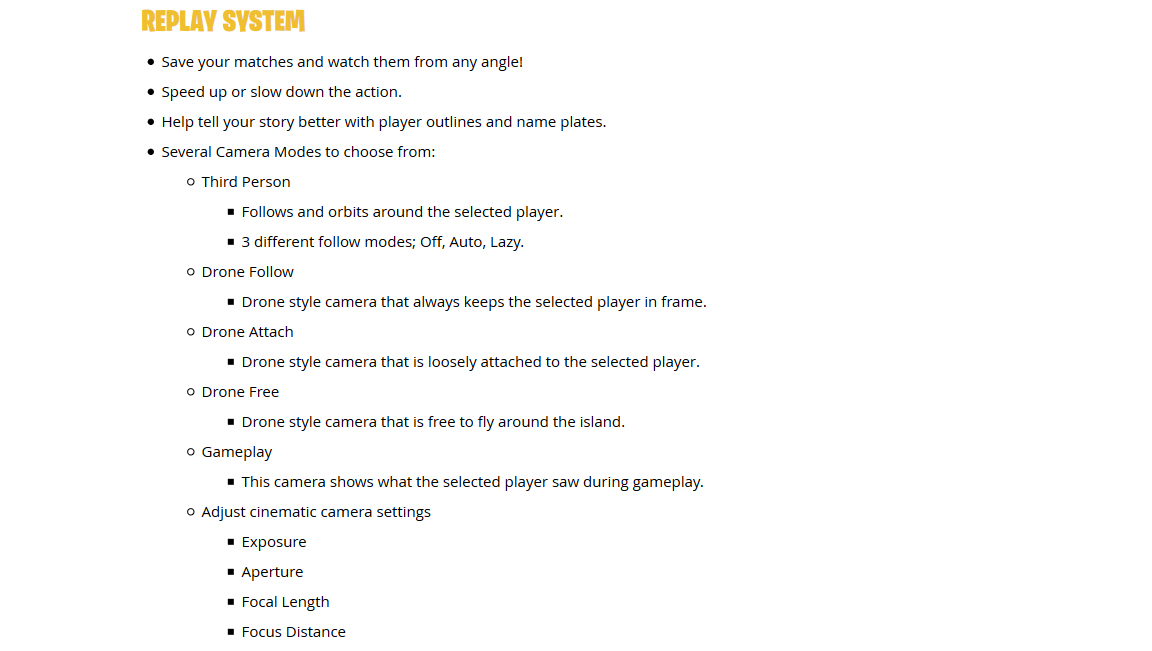 Using each of these tools is straightforward: the Replay Tool editor window features common toggles for features like rewind, fast-forward, and 15-second jump buttons flanking the play/pause button. Individual camera options like ThirdPerson and Drone selections can be found on the right-most button, and specific video zoom is placed right next to the fast-forward button. Lastly, Replay Tool users can navigate around the entire clip by using the slider bar featured above the player controls.

That's really all there is to it. The UI in the editor might take some getting used to, but we imagine that Fornite players will come to terms with it very quickly, and we're certainly looking forward to seeing some of the more outrageous fan-made clips hitting the net in the coming weeks and months.