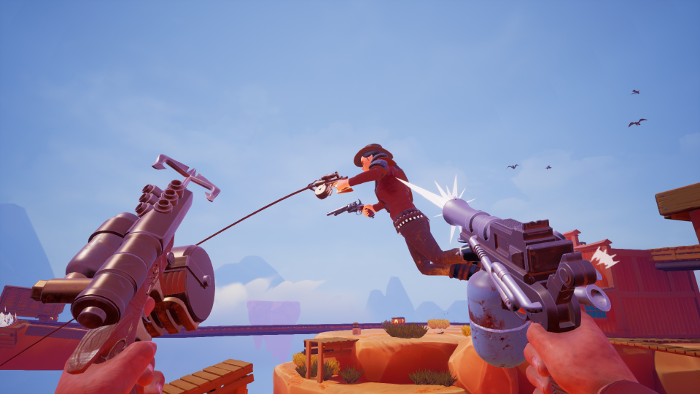 I feel like cowboys are an underused commodity in the current video game zeitgeist. Sure, we have the upcoming Red Dead Redemption 2 and Overwatch’s McCree, but I can’t think of anything else off the top of my head. Fortunately for fans of the genre, Sky Noon is looking to bring back the wild west aesthetic, only this time the setting is a little more northern, so to speak. 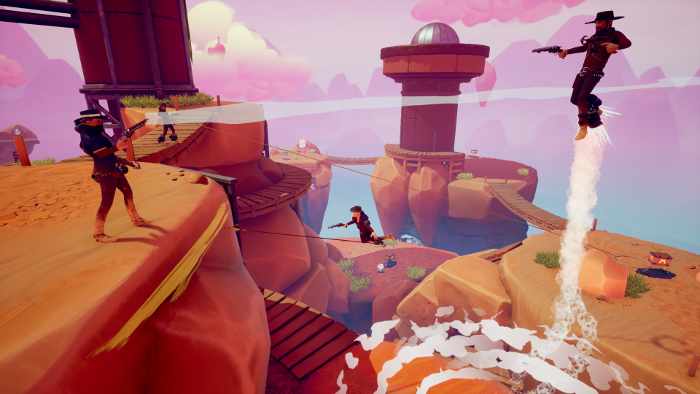 I think the hardest part about describing my hands-on time with a work-in-progress PC build of Sky Noon is where to begin. This is a game that combines elements of traditional FPS deathmatch arena combat, a focus on Smash Bros. style executions, and a steampunk western visual vibe. It then takes those mechanics and visuals and puts them way up high in the air on floating islands.

Players will take on the role of their own custom character and face off against opponents and attempt to use their air-blaster style weapons to push them off the flying islands to a Wile E. Coyote-style death plummet towards the terra firma waiting far below. All the guns in Sky Noon shoot air, but they don’t shoot it in the same way. For there’s an SMG style weapon that shoots tiny pellets that chip away at their target as opposed to a rocket launcher that shoots slow, but massive pockets of air that can launch someone way up in the air. 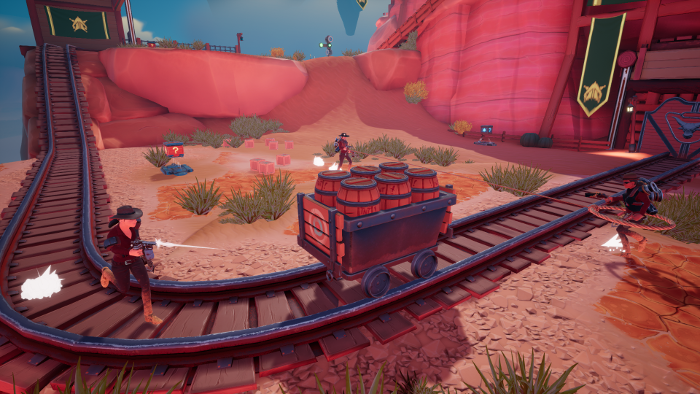 In order to keep Sky Noon from turning into an endless golden gun match, players will have a grappling hook they can use to hook onto an island as their being knocked off. It also comes in handy for traversing levels and pulling enemies towards you to set up shots. Players can also use jump pads found around the games various arenas to traverse the landscape quickly.

Along with the grappling hook, players will also get a random gadget on each spawn. Gadgets range from to full of massive air blasts. Just like the game’s various guns, gadgets can be swapped out for new ones found around the arena.

While Sky noon includes your standard PvP deathmatch, team deathmatch and king of the hill modes, I also got a chance to check out it’s “cart” mode. Cart mode is a 4v4 map in which each team tries to push a minecart full of explosives into the opposing team’s base. Players use their air weapons to push the cart towards or away from their target while simultaneously trying to keep the other team at bay. It’s possible to switch the track the mine cart is on to either fast track it towards a base or deter from one as well. 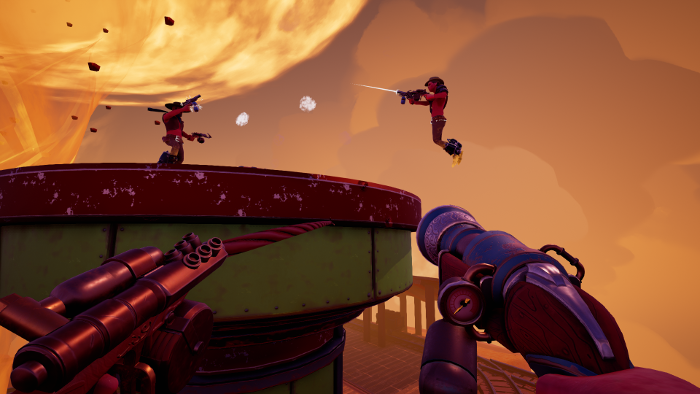 Cart mode should be somewhat familiar to anyone who’s ever had to worry about a payload in Overwatch, but getting it in and out of various areas can fluctuate a lot more in Sky Noon. I definitely found Cart mode to be frantic game type during my hands-on gameplay. That says something because I’d also say overall this a very intense game with a lot of moments of getting blown out of the arena only to save myself at the last second with a well placed grappling or watching a group of players flying after I hit them with an air bazooka.

While I do think that there is a small learning curve to really get the physics of how both the weapons and the grappling hook function, the game is still a way out from release, so that could change. Overall, I’d say I had a pretty rootin’ tootin’ good time with my hands-on experience.

Sky Noon is set to release for PC later this year and should be heading to Steam Early Access before then.

One Punch Man: A Hero Nobody Knows gameplay footage - A whole bunch-a punch-a