Hearthstone: The Witchwood - Here are the Next Three Cards

Blizzard is continuing to reveal new cards for Hearthstone's upcoming expansion, The Witchwood, to kick off the Year of the Raven. Readers who have followed Shacknews for the past couple of weeks may have been following our card analyses for all of the cards revealed to this point. However, today is going to be a little different. Because this time, it's our turn to do the unveiling here at Shacknews.

For today, we have not one, not two, but three new cards to reveal to the world. So without any further delay, say hello to the Gilnean Royal Guards. 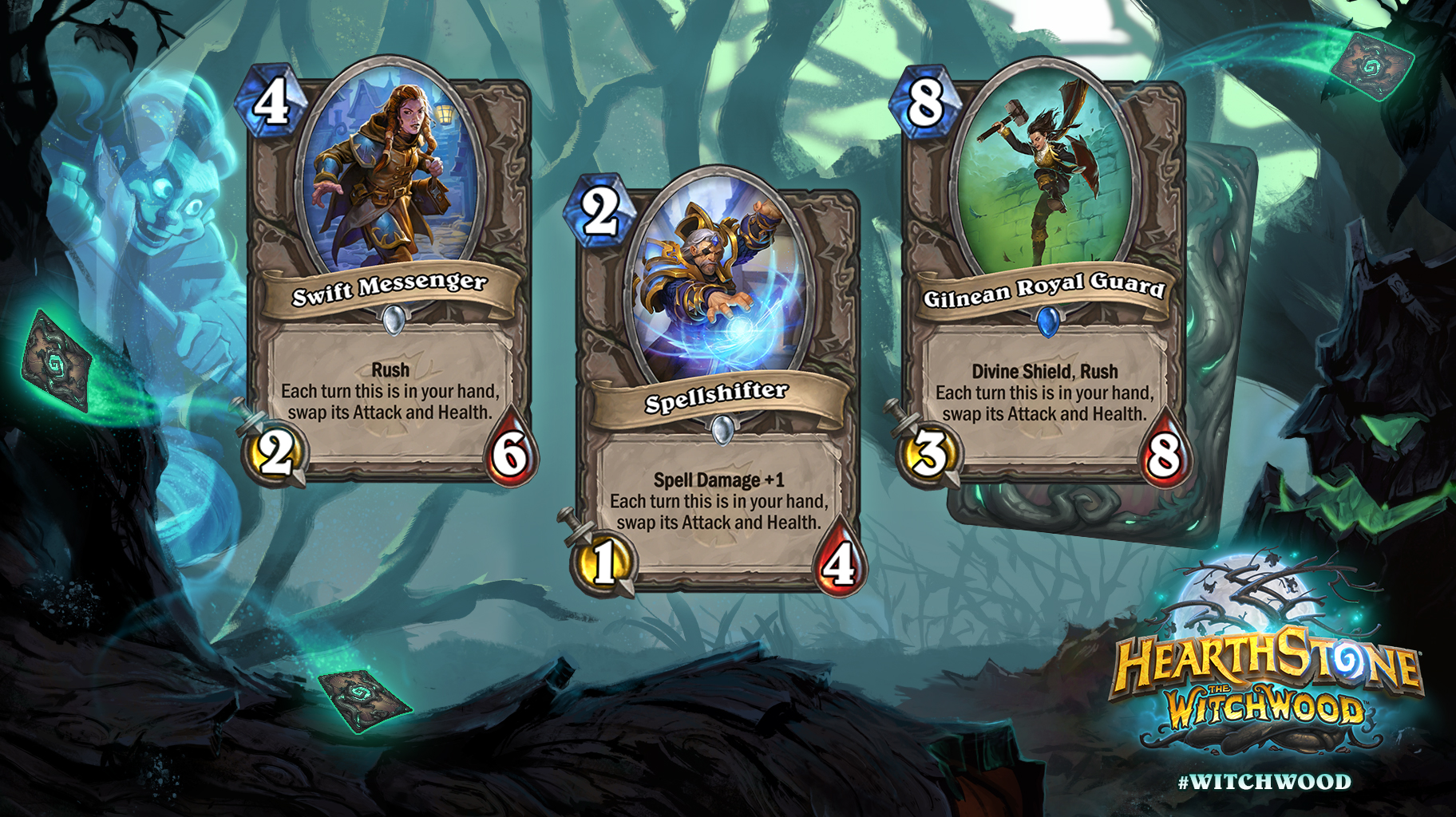 (4) Swift Messenger (2/6)
Type: Minion
Class: Neutral
Rarity: Common
Rush: Each turn this is in your hand, swap its Attack and Health.

(2) Spellshifter (1/4)
Type: Minion
Class: Neutral
Rarity: Common
Spell Damage +1: Each turn this is in your hand, swap its Attack and Health.

Who are the Royal Guards?

"We wanted to create the feeling that Genn Greymane is the king of a people. And that these people are not going to roll over, just because there's monsters. They're going to rise up to the challenge." 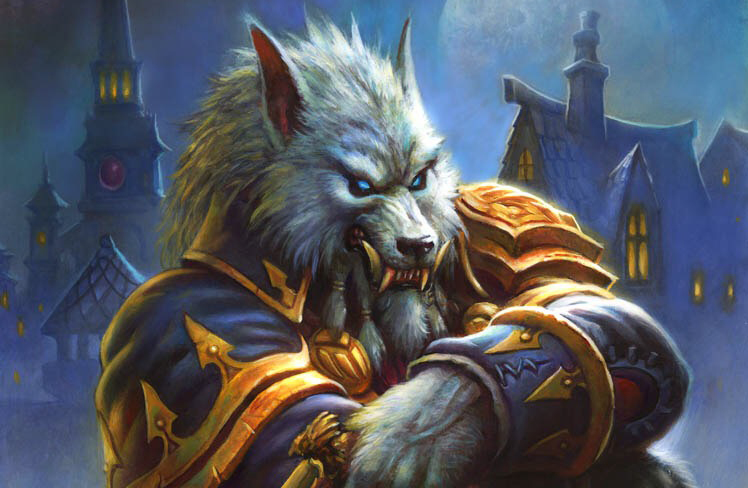 One thing to note, off the bat, is that just like their king, these three minions all have even Costs. They'll fit into even-Cost decks just fine, should players decide to go in that direction.

The Spellshifter can be useful for the early game, with a 1/4 proving to be a fine substitute for Bloodmage Thalnos. Even a 4/1, while not ideal, can still help chop away at the opponent, even if the Rogue and Druid decide to trade into it. The additional Spell Damage can offer a big boost, much like Cult Sorcerer did for the Mage.

Swift Messenger is the most versatile of these three minions. With 2/6 stats, it stands a chance to stay on the board and remove most minor inconveniences on the other side of the board. It's a fine option to deal with pesky Dude Paladins or Zoolocks. If there's something a little bigger on the other side, the 6/2 Worgen form will trade into it nicely. There have been situations in the pro scene where players have had to call in Leeroy Jenkins early to maintain control of the board and remove a larger threat. Swift Messenger can do that, thanks to its Rush mechanic, without the downside of calling in a pair of 1/1s.

Lastly, there's the bulky Gilnean Royal Guard. As I mentioned in the video above, the appeal of the Gilnean Royal Guard is being able to trade this into something big. Its Divine Shield means it can attack anything on-board and take no damage. That means its Worgen form can take down big threats like The Lich King and stay standing. It's a little easier to deal with an 8/3 in constructed play, but the task becomes a lot more daunting in Arena, where resources start to wane in the late game. 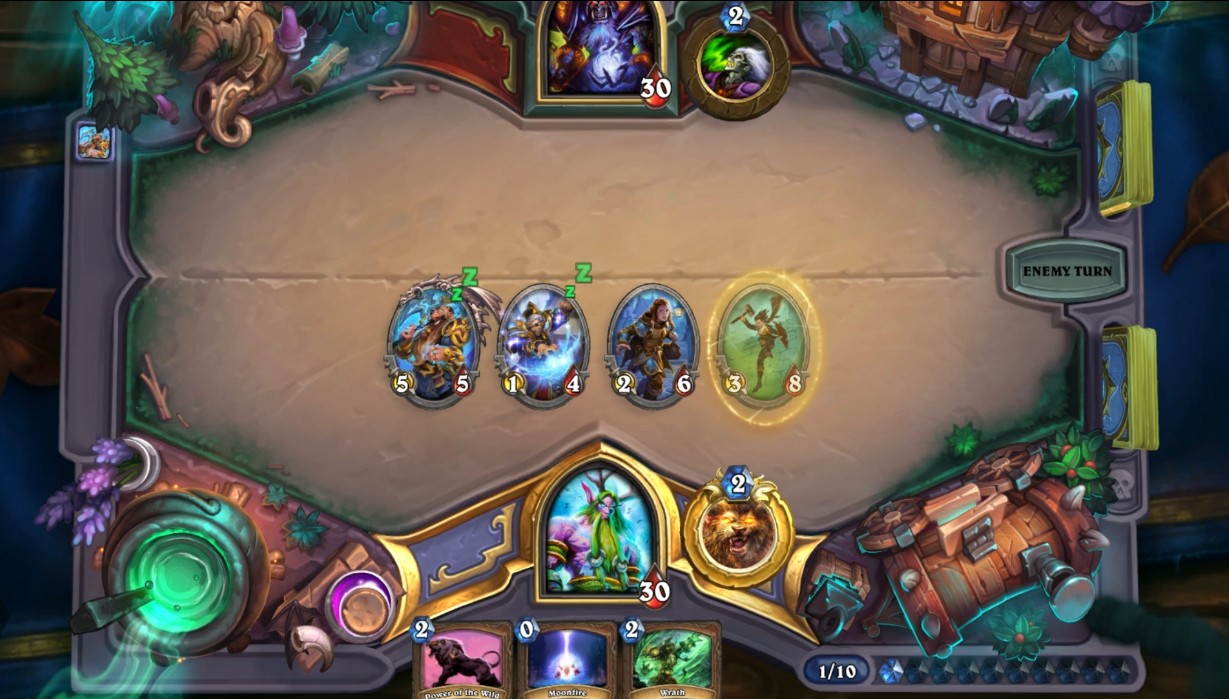 Other information on the Royal Guards

Aside from helping activate the even-Cost modifier, there are a few synergies to think about with the three Royal Guards. First off, Master Oakheart will summon all three in their human forms. It may not be the most useful idea, but the thought of summoning all three simultaneously is a pretty cool visual. That also leads into the next thing to know: the Recruit mechanic.

This goes for the other Worgen cards, as well as these three, but pulling these minions out via the Recruit mechanic will almost always pull them out in their human form. That means they'll come out as 3/8, 2/6, and 1/4 minions respectively. The exception is if they're initially summoned in Worgen form and somehow end up back in your deck via something like Psychic Scream. That would be the one instance in which they would take the field in Worgen form.

Here's something else to think about: What happens if someone decides to take one of these Worgens and gobble them up with Carnivorous Cube? Someone would then be able to summon double 8/3 Gilnean Royal Guards and go face, right? Not exactly. That's the beauty of the Rush keyword. Kosak and Hearthstone Game Designer Dean Ayala explained that the Rush keyword is in effect regardless of how the minion is summoned. That means it cannot go face on the first turn, no matter what. It does not operate on the same principle as the Charged Devilsaur, which operates on a Battlecry. Sorry, but no pulling a Thijs!

Lastly, Wild players may find more use out of the Royal Guards because of the many hand buffing options that are rotating out. I'm talking about the multitude of buffs for Paladin, like Grimestreet Outfitter and Grimestreet Enforcer. There's also the Druid, which has Mark of the Lotus and Standard spells like Power of the Wild and Branching Paths.

What are your thoughts on the Royal Guards? Be sure to join the conversation and let us know in the comments. The Witchwood is set to hit Hearthstone in mid-April. In the meantime, make sure and keep up with all of our Witchwood coverage here at Shacknews.