Warhammer: Vermintide 2 is gearing up for its release next month, and part of developer Fatshark's plans for the game's final push before launch involved a closed beta test that ran over the course of last weekend. In it, players were granted access to a number of missions that saw them laying waste to the horrendous Skaven population and for the first time doing battle with the ranks of the Chaos Army. I was fortunate enough to jump in to the first-person slaying action, and I'm happy to report that Warhammer: Vermintide 2 is a bloody and well-polished experience that should suit players with a taste for challenging action.

Fresh Meat for the Grinder

I'll admit that I have had almost no experience with other Warhammer games. With that said, I have heard much about Warhammer: End Times - Vermintide, namely that it seemed to have taken inspiration from games like Left 4 Dead, yet-another series I just happened to miss out on through the years. Fortunately, this lack of familiarity gave me the opportunity to approach Vermintide 2's cooperative action with an entirely blank slate.

Jumping into the experience was very simple. Players had (and will have) a choice of a few different characters, each presenting its own unique playstyle. For most of the test I rolled with the elven archer Kerilian, a fighter well-versed in ranged weaponry that eventually gains passive abilities that boost her dodge distance, staminate regeneration, and critical hit chances. Other characters naturally have different abilities, and the most efficient teams will have to leverage their heroes' various skills in a way that supports the entire group — assuming they can all get on the same page. 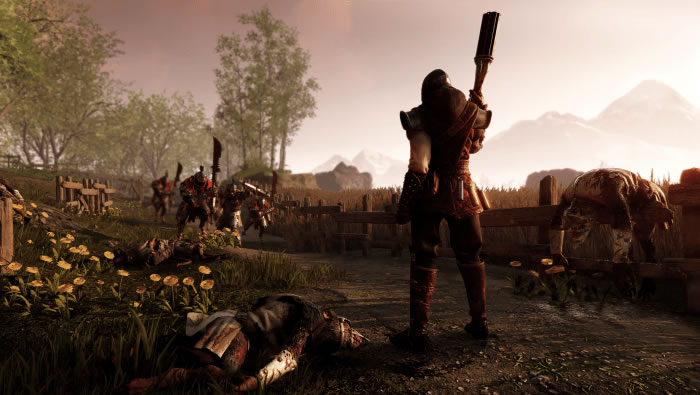 After selecting a character, the game threw myself and three other random players into a hub world where we could choose from a set selection of different game missions. Throughout my gameplay I only ever saw two missions, one involving a raid on a nearby village and another that had us slinking through a forest to take down a gigantic monster. And try as I might, not once was my crew able to topple the task at hand.

Through both of the missions, the likes of which I ran through about four times each, my prevailing thoughts were of how hard the game was. Enemies approach players in quickly moving swarms, and between the swing of a sword and the resulting gush of blood and viscera, it was tough to get a precise lock on exactly what was happening. This is one of the main reasons I chose Kerilian, since I could stay back and pick off outliers who circled around my allies for a sneak attack.

Still, my quiver would eventually run dry, and I was forced to get up close and personal with Vermintide 2's particularly ugly foes. Every time I did, I'd become surrounded by enemies and would simply swing my blade until the only living beings nearby were friendly. However, this strategy didn't work in the forest level, where enemies seemed specifically keen on seeking me out and placing my hero in a sort of neck vice I could never escape from.

The forest mission was also tough because of its gigantic mid-level adversary, who spawns shortly after the party moves through a tight corridor. Allies who ran ahead to deal with lesser monsters would get swarmed and fall, resulting in teammates doubling back through the narrow path in an effort to find safety. Unsurprisingly, this behavior left us pinned in an area with no escape. Despite repeated attempts, myself and my crew of cobbled-together allies was never able to topple the creature.

A Grim Sort of Beauty

Even though my efforts never amounted to any technical success, I was able to get a good flavor for how Warhammer: Vermintide 2's action plays out. The controls and mechanics are all very straightforward, and despite never having played a game quite like this one, there was essentially no learning curve whatsoever. Every action and button was clearly identified, and I never once fumbled as a result of any sort of sloppy craftsmanship.

What's more, Vermintide 2 looks and feels very polished. Though aiming with the bow and arrow might have felt a little airy, the swing of a sword or similar weapons felt properly weighted, and watching the detailed environments evolve from somber sunset evenings to blood-soaked battlefields was a treat all in its own. Though its doubtful anyone would argue that this game is among the best-looking games of this generation, there's certainly more than enough eye candy on offer to keep players satisfied. It even runs well enough on budget-minded hardware, with my comparatively old-school GTX 1050 able to pump out a reasonably steady 60 fps at 2560x1080 using medium graphics settings.

All in all, Warhammer: Vermintide 2 looks to be a great experience for players who like to share in bloody battles with a group of their friends. Time will tell how fresh the action feels after 20 or more hours spent, but for a weekend romp, Fatshark's latest title certainly offered up a fair amount of fun. From what could be seen, there won't be much on offer for players who like to customize their characters or dive into a rich story-based campaign, but if blood, action, and teamwork are all on the agenda, Vermintide 2 should provide satisfaction in spades.