Just two days ago we reported on an interesting new development over on the Nintendo website. Without making any sort of formal announcement, Big N updated its web portal with a new system that allowed users to leave their own reviews for specific Nintendo Switch games. The news first hit Reddit last Friday, and was subsequently picked up by a number of outlets over the following days. However, after less than one week's time, Nintendo has already pulled the user review system from its website.

Across some of the webpages for games that had been previously updated for use with the user review system, fans will now find a posted statement from Nintendo that provides insight regarding the company's decision to pull the feature. Under the new "Customer Review status" header reads the following:

"Customer reviews have been taken offline as we evaluate this feature and its functionality. We currently have no estimated date on when an update will be provided. We appreciate the positive response and thank the reviewers who provided such thoughtful commentary on the games." 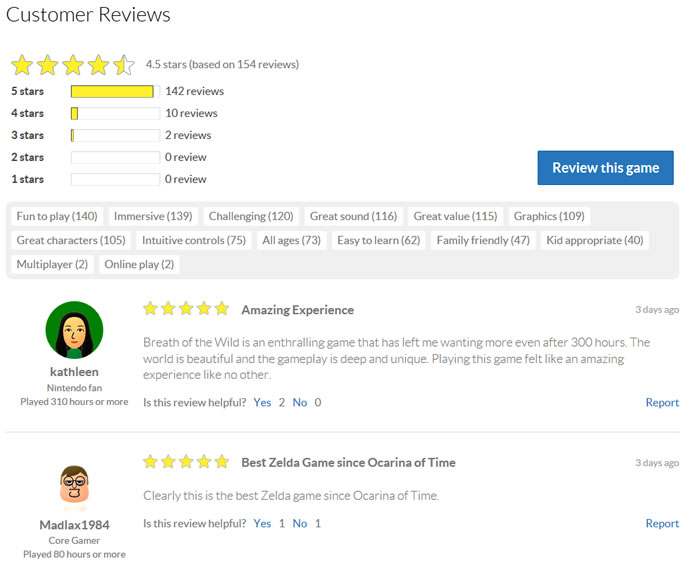 Unsurprisingly, no specific details have been given regarding the why behind this rapid removal of user reviews. We all use the internet, however, and it isn't much of a stretch of the imagination to assume that the system quickly became overloaded with filth, banality, or both. Either that, or Nintendo felt like it might not be a good idea to allow users to leave less-than-stellar game reviews on the official websites dedicated to those games.

Are we really surprised that Nintendo has pulled this feature from its website? No. Do we expect to see it again? No, not really. According to the provided statement, Nintendo doesn't seem interested in bringing back user reviews any time soon. In fact, in a statement provided to Kotaku, Nintendo twice referred to the feature as a "trial," and after thanking fans for their enthusiasm, the company reiterated that there is "no estimate on when an update will be provided on the status of this initiative."