No matter what range of the gaming spectrum a player occupies, it's basically impossible to be mad at something given for free. After all, some of the most popular games on the market, be them mobile or otherwise, are free-to-play, including Bethesda and Dire Wolf Digital's hit CCG The Elder Scrolls: Legends. For the past few months, Dire Wolf has kept to the no-cost tradition alive by offering players the chance to score free gold, event tickets, and various cards simply by logging in every day. Today is a little different, however, as the free rare card on offer is a special premium alternate version of the Nord Grisly Gourmet card that now turns weak creatures into heart-shaped Sweet Rolls. 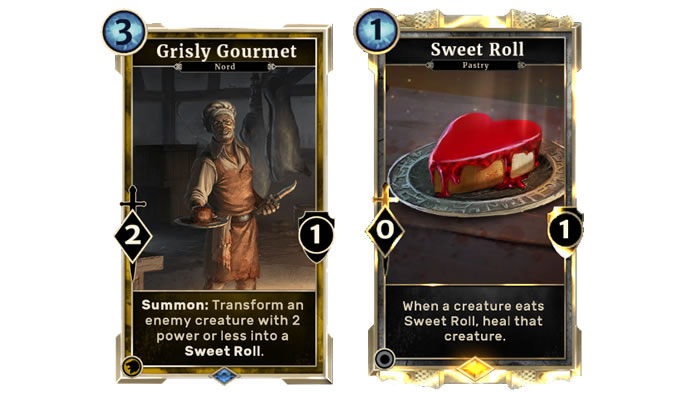 Cool as the card is — and it definitely is cool — like with other alternate art cards, there is a bit of a catch. In order to secure the alternate premium Grisly Gourmet, ES:L players will have to have logged in everyday so far this month. It's sort of like with the previous alternate versions of cards like Piercing Javelin or Lightning Bolt, where players can easily miss the chance of scoring the card if they don't take part in the tournament while it's still running. Granted, that makes the card more unique than others — that's sort of the point — but it does mean that, just like with love, some players will be left out of the loop this Valentine's Day.