Do you remember your first love? Maybe you ended up marrying them, or maybe it just didn't work out. Maybe they bought you a Bondi Blue iMac G3 for Valentine's Day and you plan on being with them forever. That part may just be me, but the point is we all have those moments that we look back on fondly. Some of them may have soured a bit at this point, but for the most part our first loves are the ones who stay in our hearts always.

Annapurna Interactive's latest title, Florence, is about that very thing: first love. Specifically, 25-year-old Florence Yeoh's first love, which she finds at just the right time in her life. It's a raw, relatable bit of interactive fiction that I was able to test out ahead of the game's February 14 release (Valentine's Day, appropriately) and I'm confident that when it launches, it'll touch plenty of hearts the way it has mine so far. 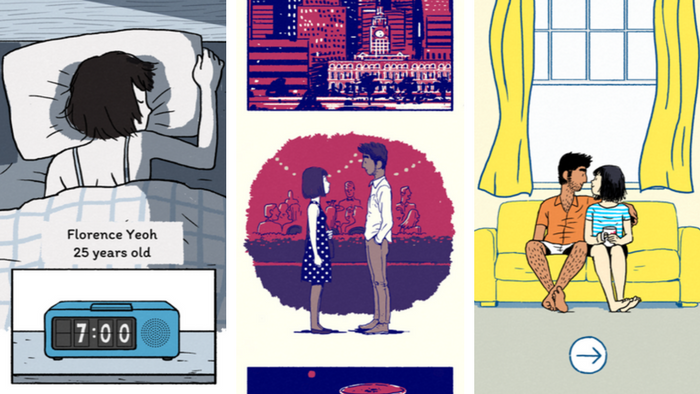 The app, which is only for iOS, is a light and airy title that felt supremely zippy and vibrant on my iPhone X, and while I was only able to test out the first six chapters, I was left yearning for more. The opening moments of the game introduce you to Florence herself, as she's snoozing away in bed. It's 7:00 AM, and it's time for her to get up for work. You need to tap the alarm clock a few times to get her to wake up and get moving.

A series of slightly animated vignettes begin to play, with you interacting with the images in small ways here and there, such as shaking a toothbrush for Florence to brush her teeth. As she goes about her office job and her daily life, it's clear from even the simple illustrations that something is missing in her life, and the daily grind is getting to her. The routine social media "like" parade, the commute, and seemingly endless cycle of work, home, bed and repeat is not enough to sustain her. 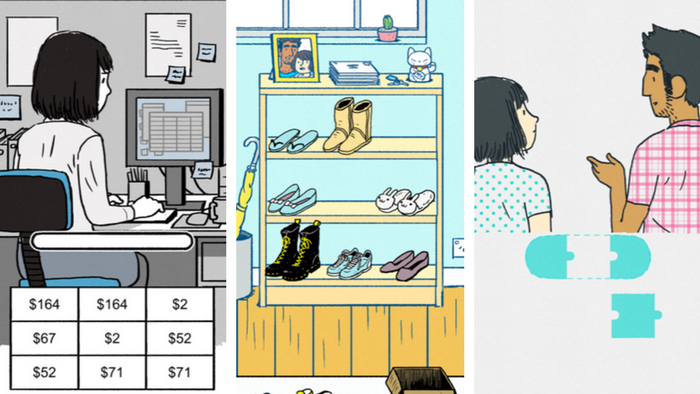 That's when she meets a cello player named Krish, illustrated by Florence "floating" through the air, carried by the gossamer notes from Krish. They strike up conversation, end up in a bike crash, go on a date, and before you know it, they've kissed. You're around for the ride and assist in move the narrative along by solving simple puzzles like a matching game, bringing images into "focus," completing small puzzles that form conversation bubbles, and more.

Nothing's ever too difficult that you can't proceed, and instead feels like a necessary part of the flow of the game. I found a small set of vignettes where you can place Krish's items on the shelf along with Florence's or send some to trash especially hitting home, as moving in with someone can be equally frustrating and exciting when you're beginning to mix your two lives together.

The game's first six chapters that I played during the preview were over far too quickly, especially when Krish and Florence's relationship takes its first turn for the sour in the last vignette, where they get into an argument and make up with a touching resolution, but it perfectly demonstrated how quick and seemingly pointless tiffs can turn into the very things that will drive a wedge in the strongest of relationships as quickly as they were formed.

Florence is a game that touches on some important facets of relationships, whether they're our first or our third, and the difficult decisions and compromises that come along with them. If you're looking for a simple, casual experience that only takes about a half-hour to an hour to complete (depending on if you want to see some sequences again) you'd do well to try out Florence. Keep in mind, however, that it's only very loosely considered a game and is instead more of a narrative experience. If that works for you, and you want to feel some of the bittersweet pain that comes attached to being in and out of a relationship, as well as the awkwardness and beauty that go hand in hand with falling in love, you absolutely must play Florence.

This review is based on an iOS download code provided by Annapurna Interactive. Florence is available on the App Store right now for $2.99.