Monster Hunter World - How to Kill the Odogaron

The Odogaron is a vicious beast, and quite possibly the next major hurdle you’ll have to leap during your playthrough of Monster Hunter World. Learning how to kill the Odogaron, and then putting it into practice, is going to take some patience and work, so be prepared for a fight.

How to Kill the Odogaron 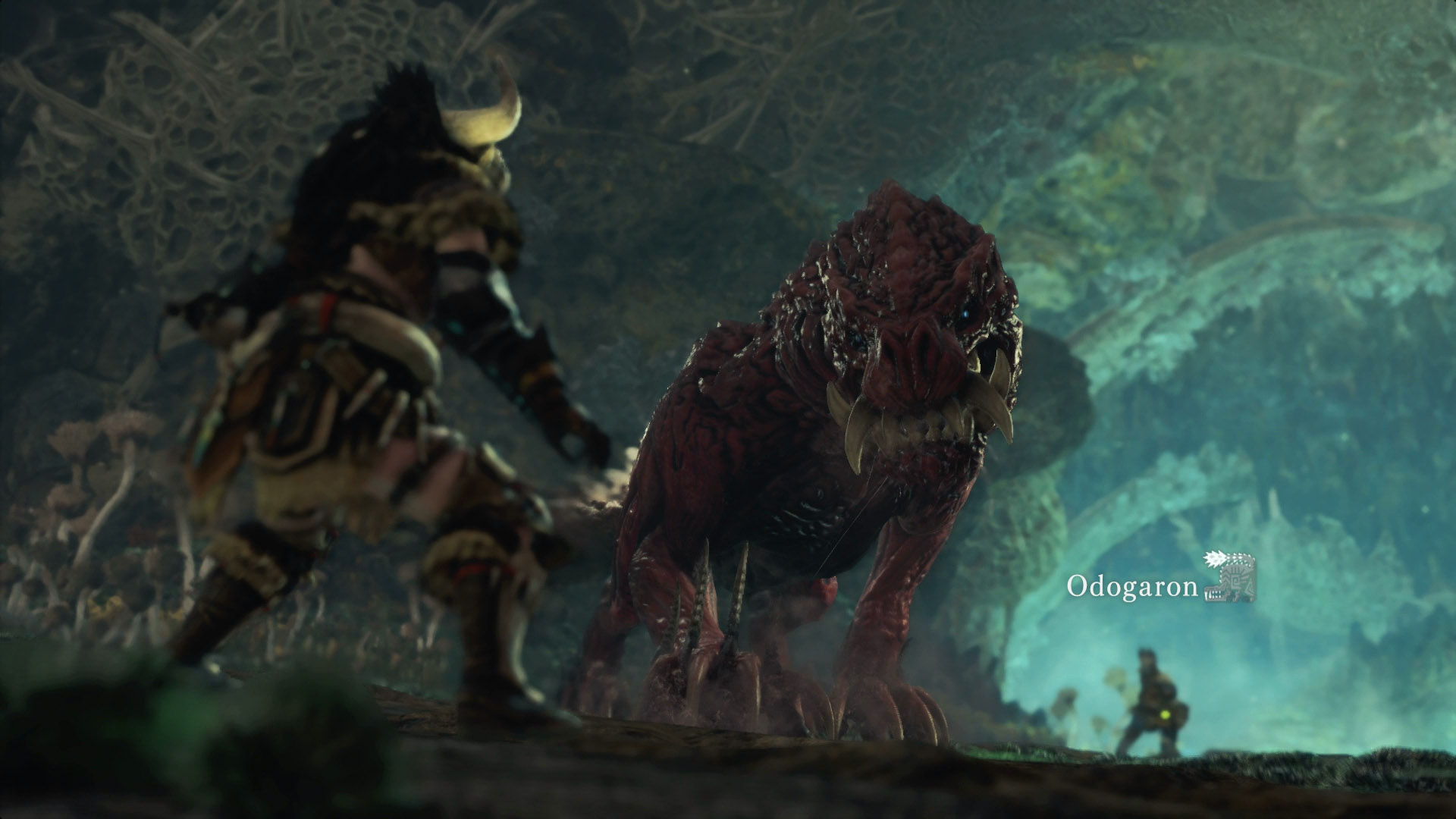 The Odogaron is a large monster you’re required to hunt as part of the quest, Into the Bowels of the Vale, a main story Assignment that must be completed if you wish to progress further into the game. This will no doubt be your next largest roadblock, with the first being hunting the Anjanath. 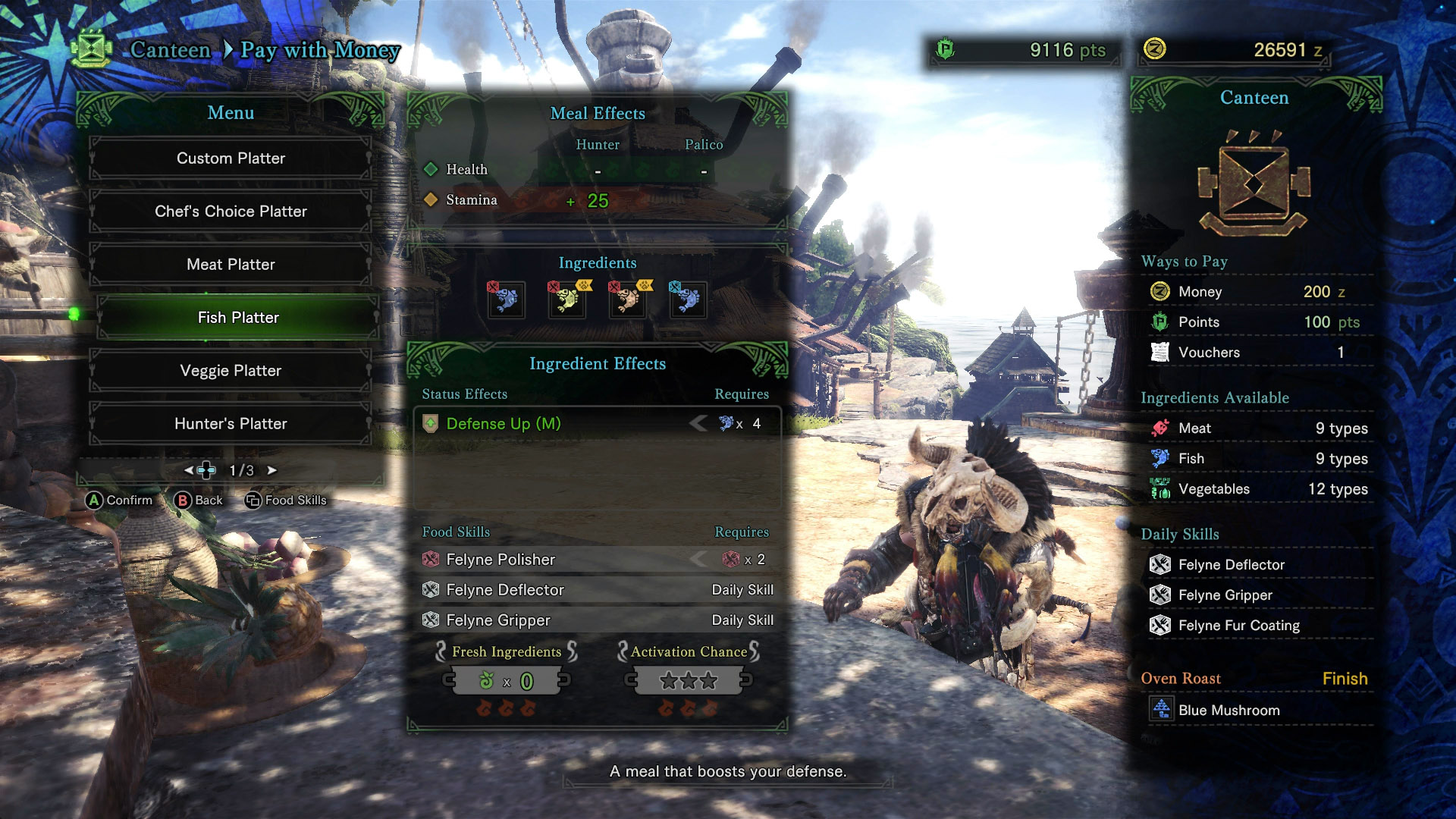 Killing the Odogaron in Monster Hunter World begins before you even strike out on the Assignment. First, it is almost essential that you visit the Canteen to fuel up. While some veterans can get away with avoiding the Canteen altogether, if you’re struggling to take down the Odogaron, a meal can make all the difference in the world. Because the Odogaron deals vast amounts of damage, consider opting for a Defense Up meal, such as the Fish Platter.

Another task before tracking down the Odogaron is to understand its strengths and weaknesses. Let’s start with its strengths. The Odogaron is an extremely nimble hound-like creature that is able to land attacks in rapid succession, with some capable of causing bleeding effects – so it’s important you know how to stop bleeding. This monster is also able to stun you using a howl, so if you’ve got a Hunting Horn in your party, it can be worth activating the Earplugs buff.

To deal with these strengths, you should focus entirely on staying agile and dashing out of its attack range wherever possible. When you are in close range, attack a few times and then prepare to dodge. 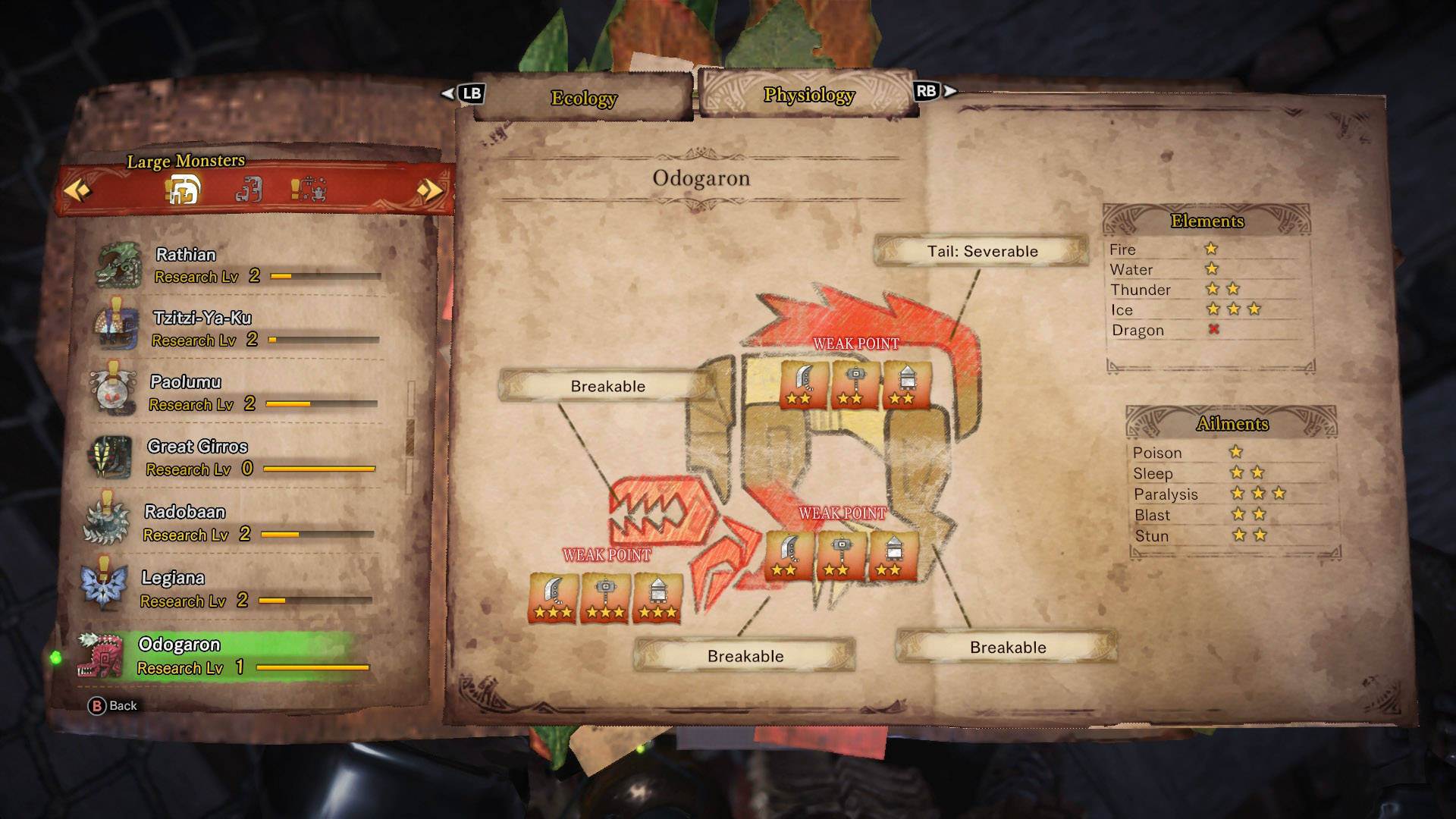 Now that you know its strengths, you need to be familiar with the Odogaron’s weaknesses. You can check out our Monster Hunter World monster weaknesses guide if you want to figure it out for yourself. The Odogaron has three weak points: Head, arms, and tail – the weakest of these three is its face, of which each weapon type is 3-star effective.

In terms Elements and Ailments you should be using against the Odogaron, it is extremely vulnerable to Ice damage, while Thunder damage is quite effective. It’s only resistant to Dragon element attacks, so try to avoid using that type. For Ailments, you should absolutely use Paralysis against it, as Paralysis has a 3-star rating. I was using an Insect Glaive with a Paralysis Kinsect and my Palico was using a Paralysis-based weapon, and the Odogaron was being paralyzed consistently throughout the fight. 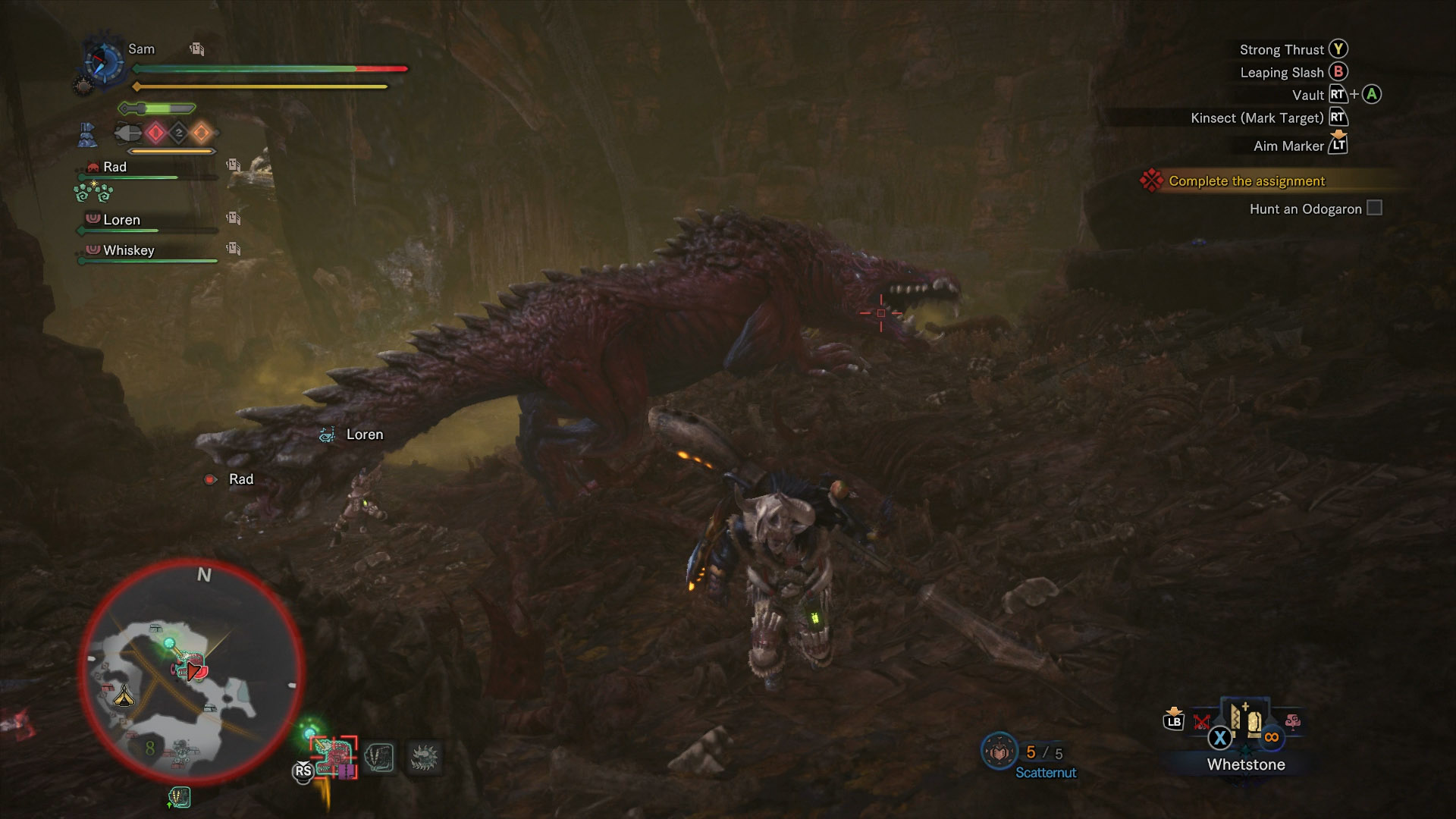 As for actually fighting the Odogaron, make sure you have plenty of Potions, Mega Potions, and First-Aid Potions, along with EZ Rations, and Astera Rations. Anytime you get hit, you will no doubt need to heal yourself. Anytime you go in for an attack, have a clear escape path planned as you should only aim to land a few attacks before backing off. If you do have Paralysis ailments and get it stunned, run in and wail on it with everything you’ve got. 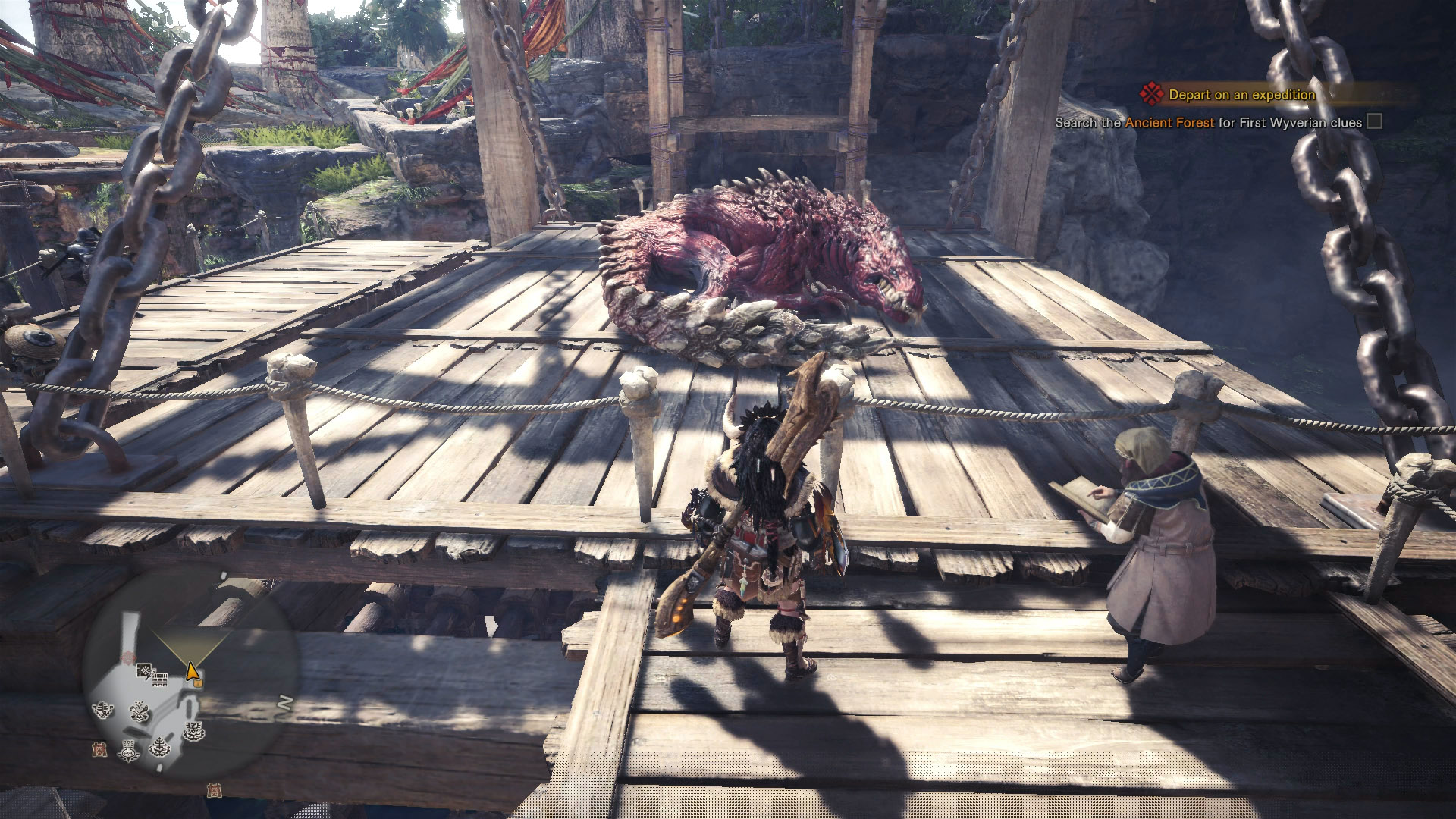 The Odogaron will likely leave the fight 3 or 4 times, bounding off to the next area. Once you’ve beaten it enough, make sure you look out for the signs it makes when it’s able to be trapped. If you’re not sure how to do it, take a look at our guide on how to trap a monster so you get maximum rewards. Keep in mind that if you’re still struggling, consider jumping in and playing co-op with a friend. Hopefully this will help you kill the Odogaron or even capture it if you’ve got the know-how!

Be sure to check out our Monster Hunter World Guide for more helpful insights on how to take down tough monsters!