Picking the right weapon for the job can be a bit challenging in Monster Hunter World, especially considering there are so many options. One weapon that might catch your eye looks like a little bug, and is called a Kinsect. These Kinsects are part of an Insect Glaive combo, and can be quite a lot of fun to use.

How to Use the Insect Glaive and Kinsects

When you first start Monster Hunter World and are trying to decide what weapon to use, it might be a good idea to avoid the Kinsect until you’re a little more familiar with fighting and hunting monsters. However, if you’re ready for it, the Kinsect can be a powerful tool. 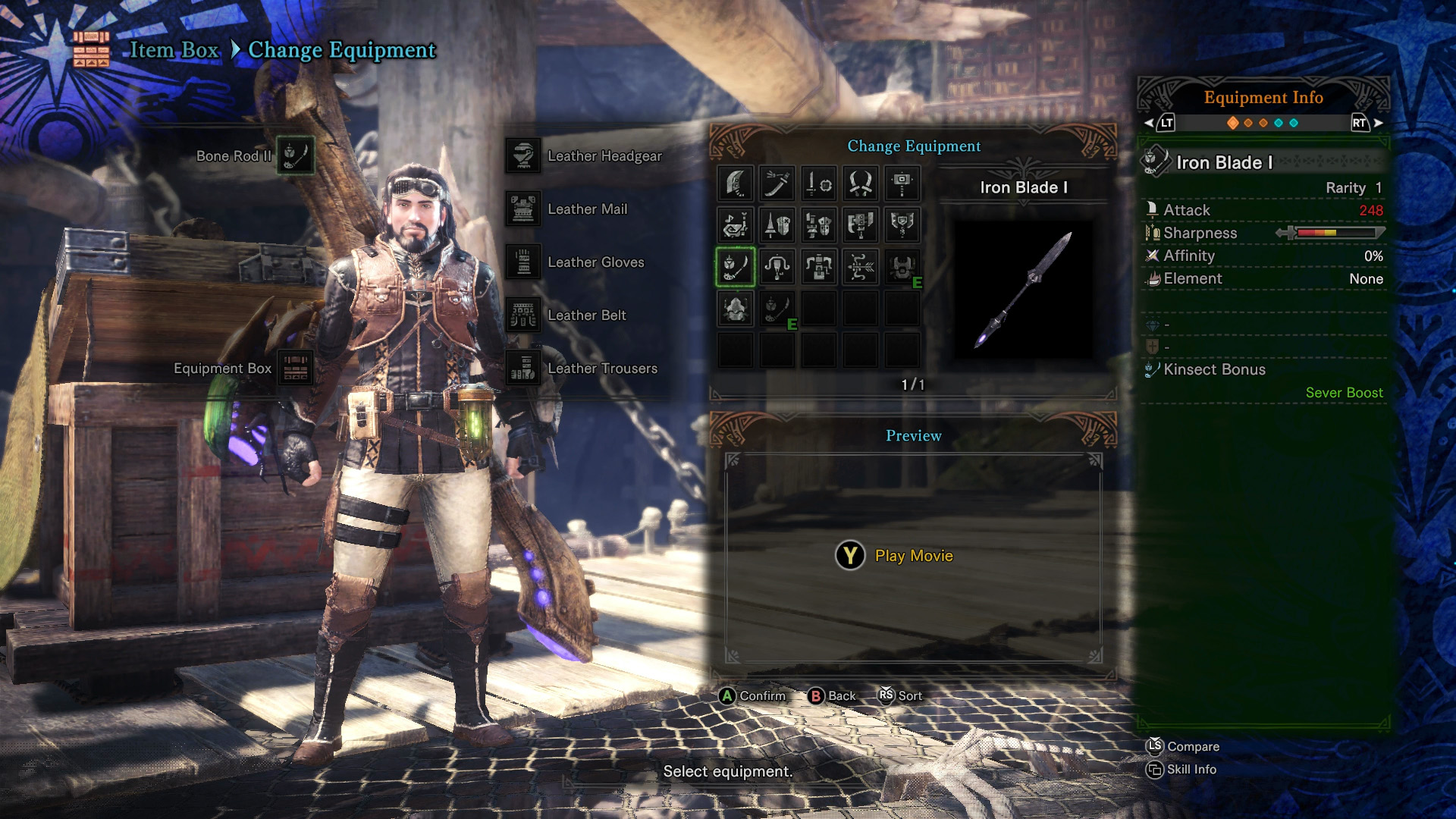 Before you can get your own Kinsect and have it sitting on your arm, you’re going to need to get an Insect Glaive. The Insect Glaive is actually called "Iron Blade I" when you first start the game, and looks like a two-ended spear. When you equip the Iron Blade I, you’ll be able to equip one of two Kinsects.

There are two Kinsects to choose from, the Culldrone I or the Mauldrone I. Pick the one that best matches your playstyle:

How to Heal or Poison with a Kinsect Attack

Depending on the Kinsect you chose to pair with your Insect Glaive will change whether you’re able to poison enemies or heal yourself. First, you need to draw your weapon, and then holding Left Trigger, pull the Right Trigger to shoot a dart that your Kinsect attacks. Alternatively, if you’re already in close-range, simply pull the Right Trigger. 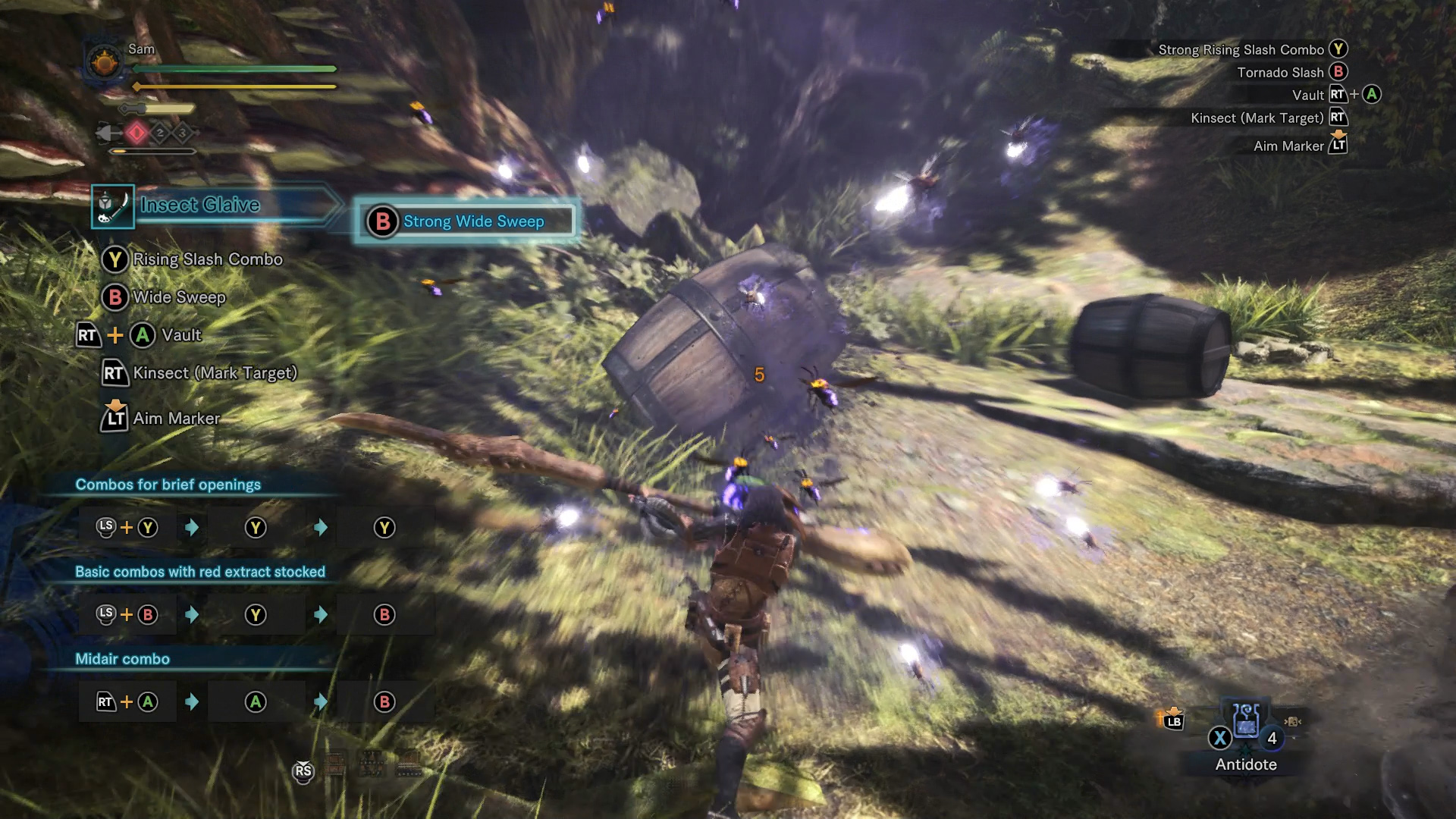 Your Kinsect will fly out and attack whatever you marked, leaving behind a swarm of colored bugs (Kinsect Powder), either green for healing or purple for poison.

When you see the swarm of bugs, you must go up and attack them with your Insect Glaive. Doing this will either heal you for a small amount or poison the monster you’re attacking.

Whenever you mark a target and have the Kinsect attack it, you can recall the Kinsect and receive a bonus depending on what part of the body the Kinsect attacked. As you fight a monster, aim carefully and see what area of the monster gives different extractions.

You can send your Kinsect out multiple times to attack each body part, and then recall it to receive the effects of each part. This allows you to have the Red bonus and the Orange bonus at once, or all four.

The Insect Glaive is a powerful staff or spear-type weapon that has a martial arts feel to it. A lot of the power behind the Insect Glaive comes from its in-air attacks that allow you to be above the battlefield, and in special cases, actually allows you to mount a monster. 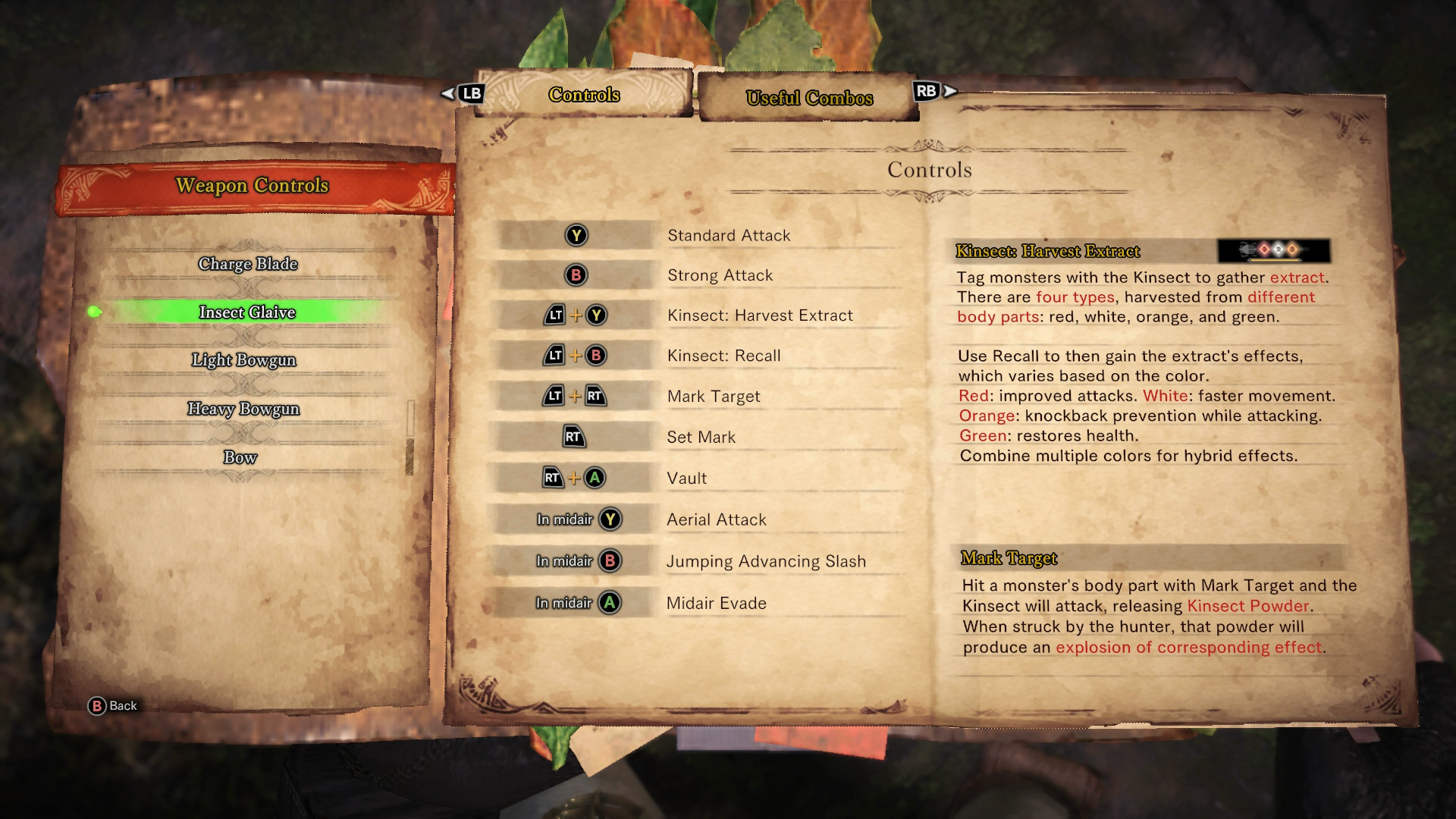 As you can see from the image, there are only two forms of attacking outside of the Kinsect abilities or in-air abilities. In order to perform an in-air ability, you must first hold Right Trigger and then press the dash key (A on Xbox One). This pushes the Insect Glaive into the ground and thrusts your hunter into the air. 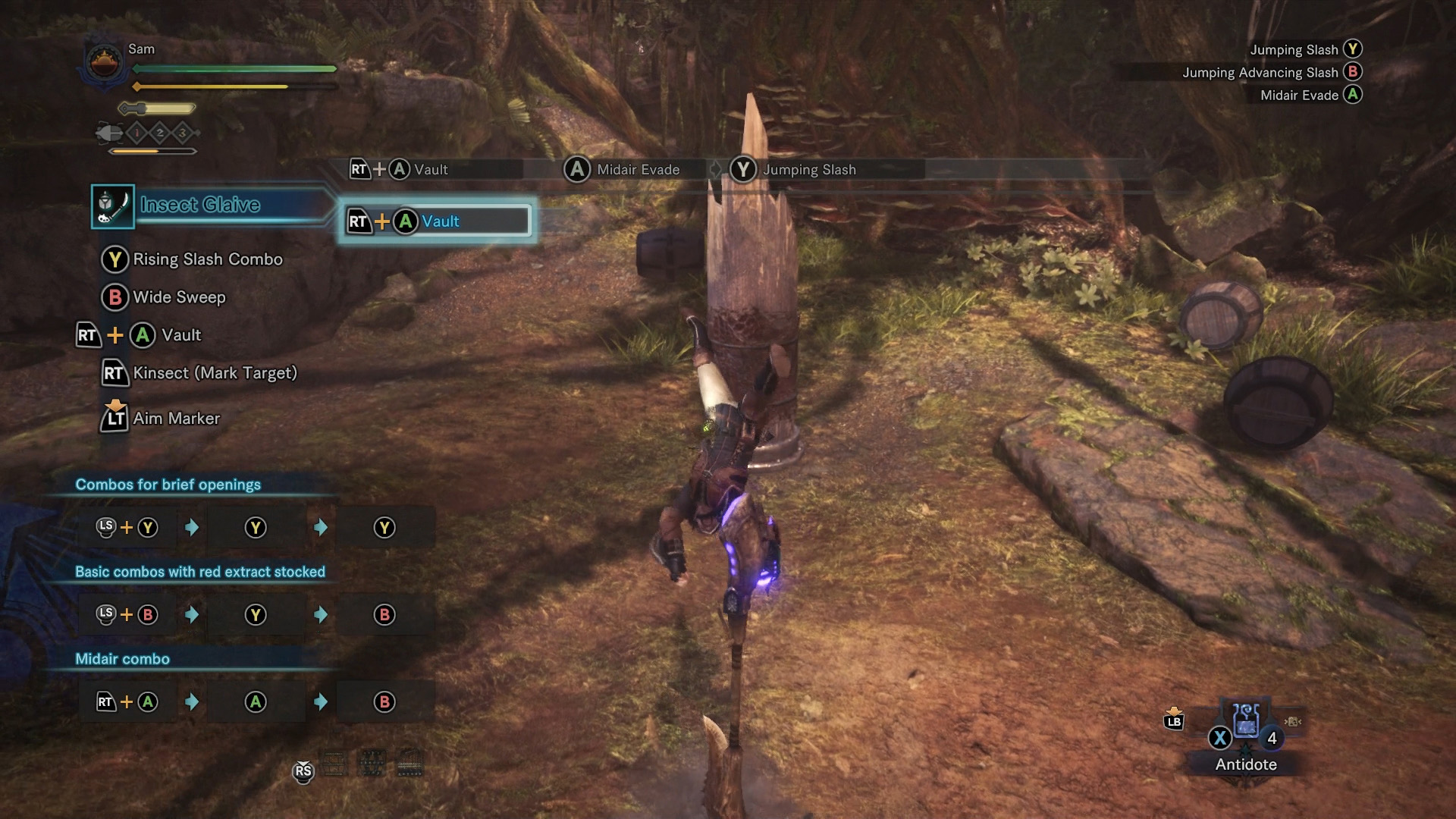 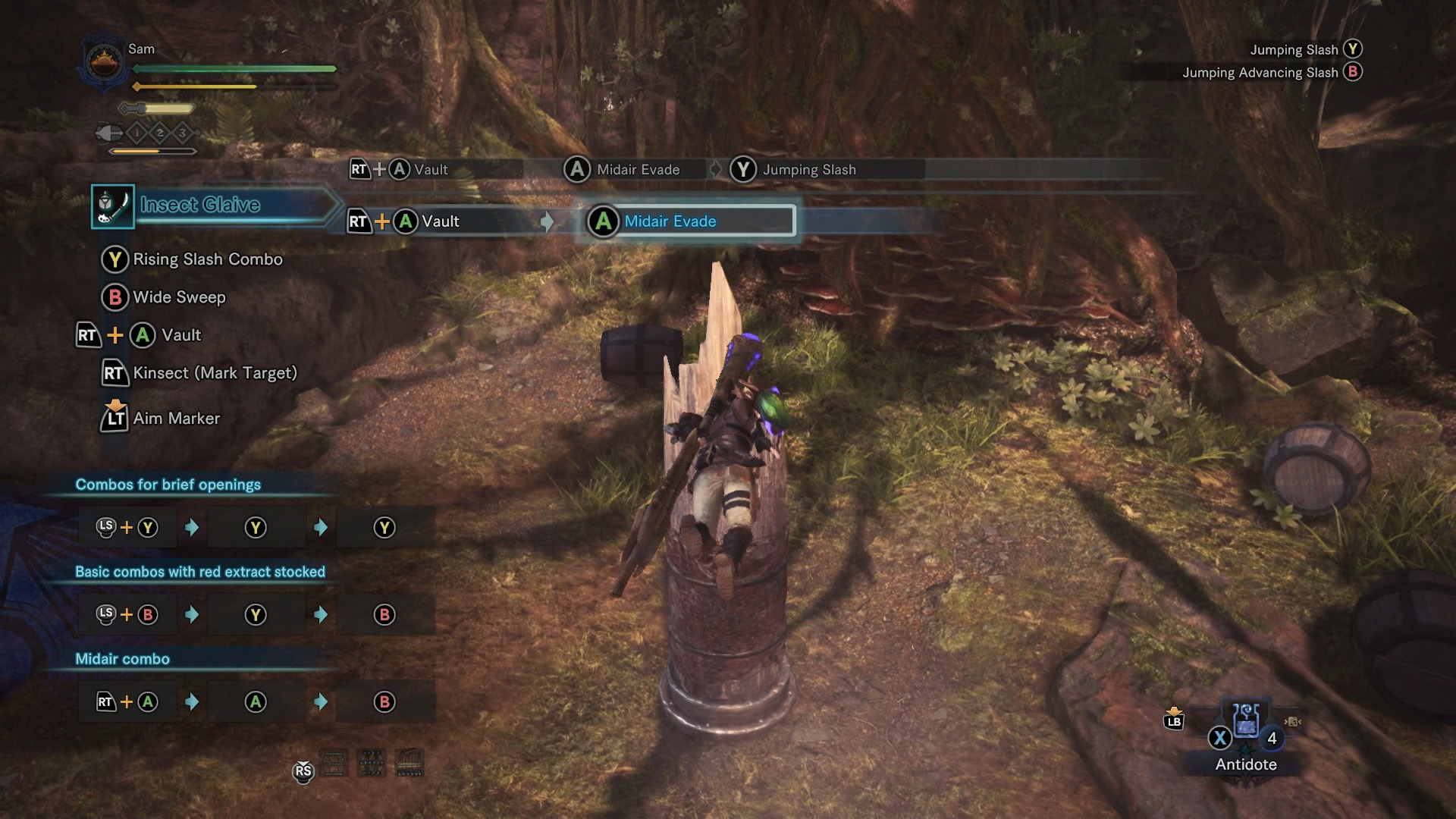 The Insect Glaive and Kinsect is an excellent combo that offers a lot of utility and buffs. By pairing your Kinsect Extraction with aerial attacks, you’ll be able to deal considerable damage to any monster you come across in the wild.

Head on over to our Monster Hunter World Guide hub for more content and tips.