Roughly a month has passed since Hearthstone's Kobolds & Catacombs expansion released. That means the meta is starting to take shape, with all-new deck types that are dominating Ranked Play. Players are seeing some new faces, along with some old faces that are lending a hand.

By now, hardcore Hearthstone players have a general idea of what to craft. But what about the casual player and those looking to climb the ladder? For today, Shacknews is going to lend those folks a hand by looking at six Neutral cards that are worth spending hard-earned mana on to craft. 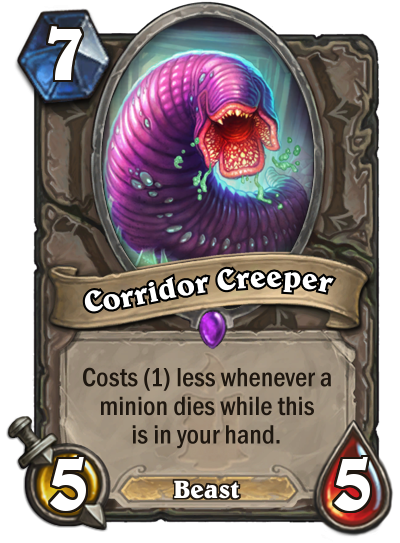 (7) Corridor Creeper (5/5)
Type: Minion - Beast
Class: Neutral
Rarity: Epic
Costs (1) less whenever a minion dies while this is in your hand.

Let's start with the big one, right off the bat. Craft Corridor Creeper immediately! It's so versatile that it fits in nearly every deck imaginable. Zoo decks? It'll work there. Control decks? Shouldn't take much to reduce that cost to (0). Aggro? Midrange? You name it, there's probably a place for Corridor Creeper.

Nearly every class in the game has found some use for Corridor Creeper in some form. Its 5/5 stats make it tough on its own, but it's downright demoralizing to see the opponent either clear your board or set up a giant board of their and tack on an extra 5/5 Beast.

This is the big winner of the Kobolds & Catacombs expansion so far. In fact, given that it often finds its way onto the board on Turn 3 or 4, it's entirely reasonable to expect an incoming nerf at some point, whether it's Blizzard altering the text for "friendly minions" or something else. But Corridor Creeper is terrorizing the meta at the moment. For now, the best thing to do is join the party. 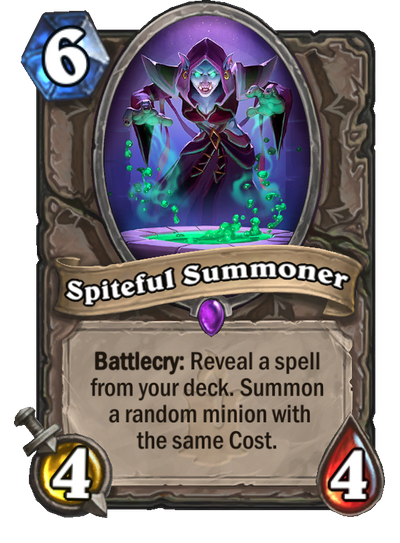 Spiteful Summoner has proven to be far more insane that I could have ever expected. I was merely scratching the surface of what it could do by initially analyzing it with Druid in mind. It's actually a new Aggro Priest that has risen to take advantage of this wildly powerful minion.

Priests that pack in Mind Control or Free From Amber often crush their opponents with this as a Turn 6 play. It's found its way into a majority of Priest decks, causing even the dominant Highlander Priest deck to get set aside. A more effective Priest is scary for everyone and unlike the Highlander Priest, this deck (with Spiteful Summoner as a cornerstone) is sticking around after this year's Standard rotation. 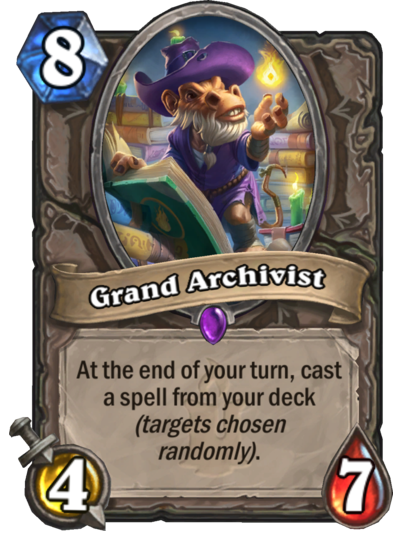 (8) Grand Archivist (4/7)
Type: Minion
Class: Neutral
Rarity: Epic
At the end of your turn, cast a spell from your deck (targets chosen randomly).

When I originally analyzed Grand Archivist, I said it was on the cusp of being a sleeper hit. However, I mistakenly called it a dud because it casts the actual spell in the deck, finding it to be limited for Mages. But Grand Archivist isn't for Mages. It's for Priests and Hunters!

Grand Archivist is downright scary in Priest decks, where it can cast either Mind Control or Free From Amber. The former will caution opponents from playing their big minions whenever Grand Archivist hits the board, while the latter ensures that Turn 8 lays down both a 4/7 and a random 8-cost minion. That's pretty awesome, but not as awesome as Midrange Hunters using this guy to pull out Call of the Wild. That builds board presence fast and makes Grand Archivist a key component in a number of decks. 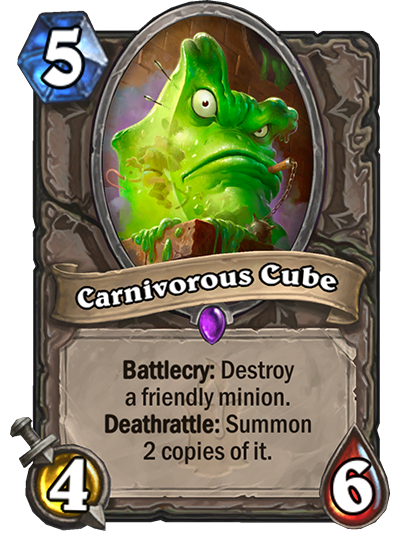 This guy! This guy!

Carnivorous Cube is leading a newly resurgent Warlock class, mainly because of how it's able to lead the charge towards one-to-two turn kills. It takes a number of parts to make the Demon Warlock deck effective, like Possessed Lackey and Skull of the Man'ari, but if Doomguard hits the board, look out! It likely means Carnivorous Cube is right behind it. And leaving the Cube alone isn't an option, either, thanks to the 1-mana Dark Pact, which removes the Cube and puts two Doomguards in its place.

It takes a lot to clear this board, though it is possible. Mages and Warriors have the tools to clear all of these obstacles, assuming they draw the right cards. But the real kicker about the Carnivorous Cube play is that a Bloodreaver Gul'dan play simply brings all of those Doomguards back (potentially five or six!), which then just go face to end the game. This deck withers without Carnivorous Cube, which is why it's best to have a couple of handy for your Warlock deck. 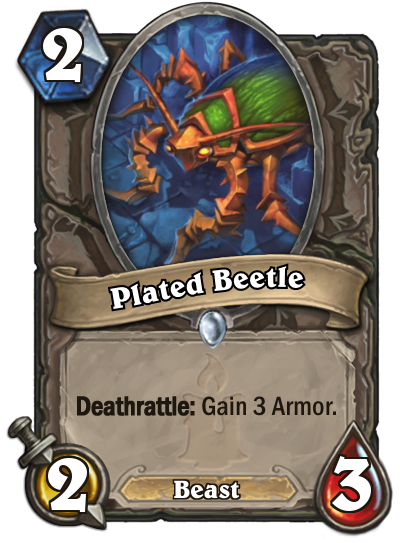 Plated Beetle is more like the unsung hero for the Warlock deck, as well as a few others. Its 2/3 stats are solid for a 2-cost minion. But its the Deathrattle that's much more useful than one would imagine. For Warlock, it allows the luxury of a few more Life Taps. For everyone else, it's a safer cushion against the growing tide of aggro decks.

Plated Beetle is only going to get more valuable going forward, especially once Mistress of Mixtures heads off into Wild. Early-game recovery can be a huge help, so be sure to have one of these guys around.

These are all good Neutrals, but how about class cards? Come back later this week and we'll pick one class-specific card for each class that every player must have in their Hearthstone deck.