Spintires: Mudrunner Review: A Light In the Darkness

First released in the summer of 2014, the original Spintires arrived on Steam with little fanfare as a log-transporting simulator featuring a lineup of Russian trucks. Using its novel mud physics, Spintires became a cult hit with PC gamers and has sold more than a million copies. Despite the success, the game was plagued by controversy between its lone developer, Pavel Zagrebelnyj, and a sketchy publisher. Zagrebelnyj owned the rights to the engine and assets and was able to team up with a new publisher who will help him deliver on the promise of the first game. Mudrunner is the initial offering from the new union and is an absolute joy, despite its many quirks and frustrations.

A Heavy Sense of Dread

Spintires: Mudrunner is one of those quirky PC games that does not sound fun or worth spending time with on paper. The paper napkin pitch for the game is that you use a collection of aging soviet trucks to move logs from one place to another. You will often spend insane amounts of time simply moving a few feet. The user interface is counter-intuitive and the camera system used by the game is often considered to be user-hostile by new players. The front-end menus could would be justifiably described as ugly, even if this came out in 1995. The color palette is almost oppressive in its bleakness.

As the product of a single Russian developer, Mudrunner has that unmistakeable eastern European or Soviet aura found in other PC gaming standouts of similar lineage. Fans of the S.T.A.L.K.E.R. games will immediately recognize the incredibly wearying, pessimistic atmosphere. In a game where there are no enemies, monsters, or anything that could cause the player harm, just sitting idle in a truck can feel dangerous, like some unseen entity is watching over you with sinister intentions. In place of literal monsters are obstructions in your path, like fallen trees, rocks, or various bodies of water. 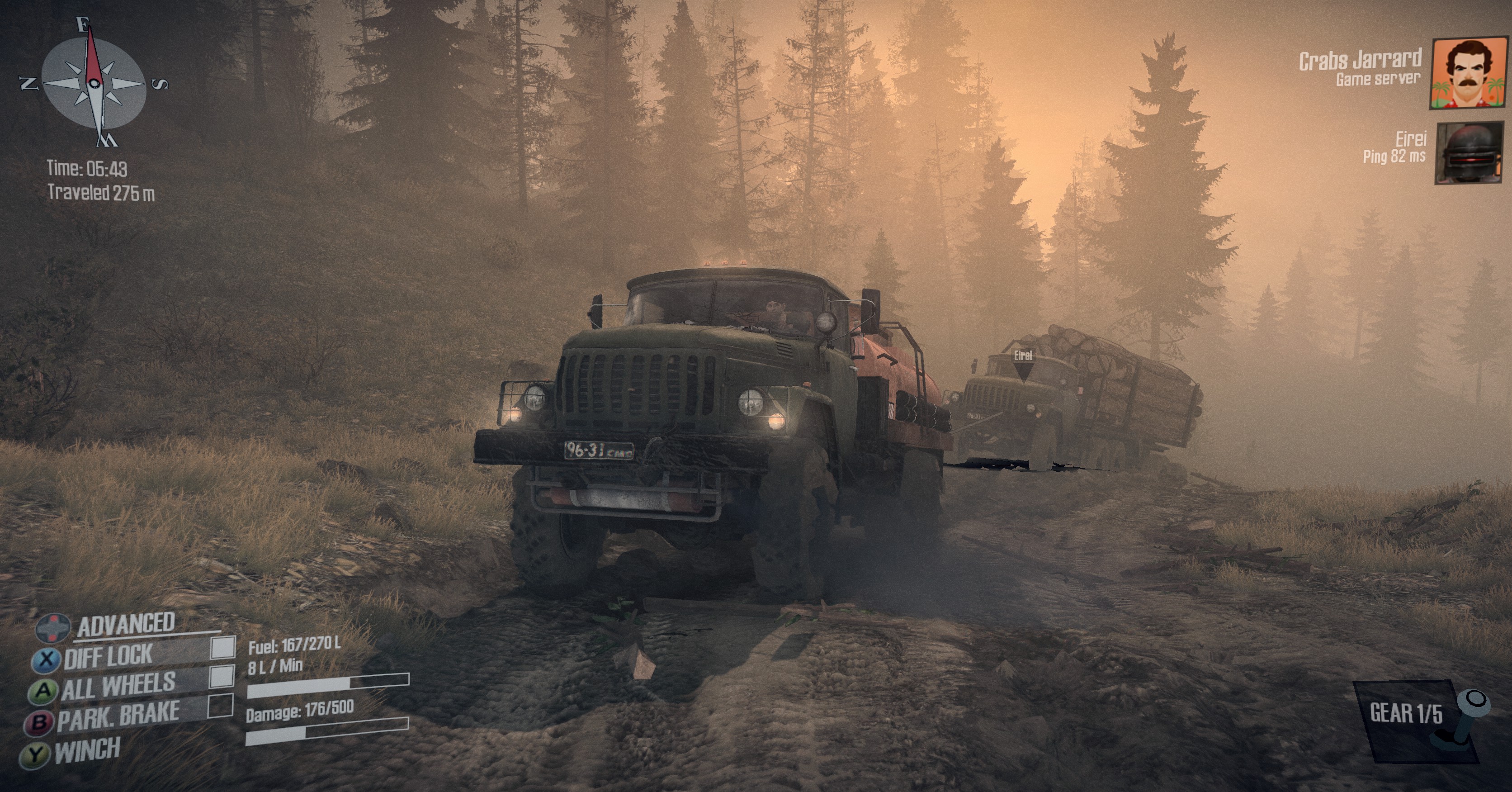 The More You Struggle, The Faster You Sink

Prior to experiencing Spintires, I never considered that a game about off-road trucking could be anything more than shovelware. What separates Mudrunner from the rest of those bargain bin titles is the atmosphere and the mud. The mud is the unquestioned star of the show here. The Spintires idea was born around a tech demo Pavel Zagrebelnyj made in 2009 as an entry into Intel’s Level Up game development competition. The focus of the demo was simply to interact with the mud.

Everything in Spintires revolves around how the tires on your truck interact with the ground. All the trucks come with a pretty convincing suspension simulation and every successful log hauling expedition relies on the player’s ability to understand how it works in relation to the constantly shifting state of the ground beneath the wheels. Sometimes, lighter loads can safely roll over loose dirt, while repeatedly driving over the same soft spot can result in your tires sinking into the wet earth, potentially bogging you down. Careful use of your accelerator, along with proficiency in gear selection is required to dig yourself out of sticky situations.

Many times, despite your best intentions, you will get stuck so badly that no amount of fidgeting with gears or the accelerator will work. All vehicles are outfitted with a winch that can be attached to nearby trees, stumps, or even other trucks. Every vehicle has a selection of anchor points that the winch can work with. Players can choose to use the winch’s power to pull or a combination of winching and driving to become untangled from the muck. Some terrain conditions are dire enough that a set of two or more trucks winched together are required to traverse them successfully. Users can warp into nearby trucks to help out with getting un-stuck or providing fuel and repairs. 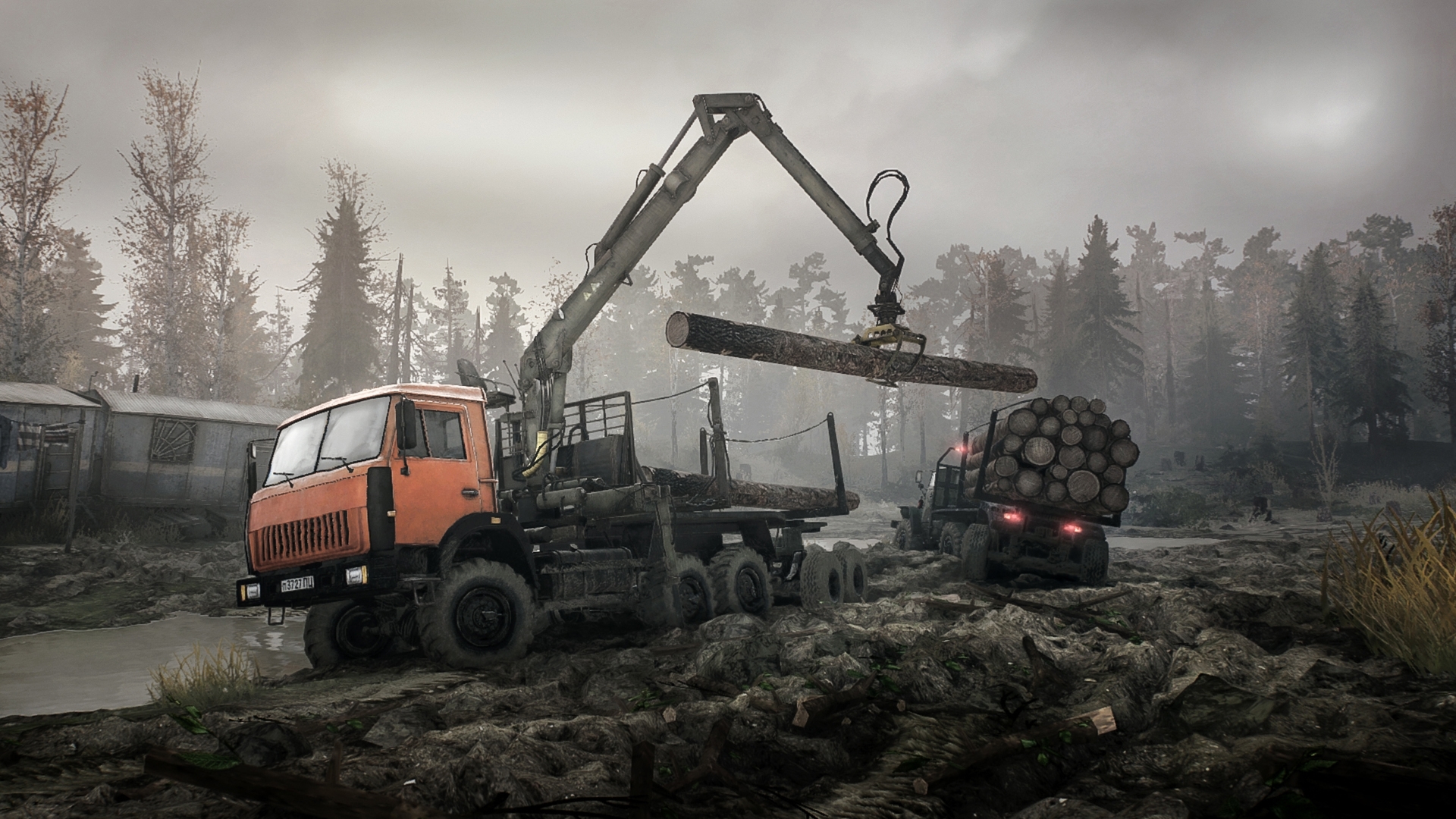 The Right Tool for the Job

The game comes with 6 maps out of the box, each with unique characteristics and challenges. All maps have log source points and lumber mills that said logs must be delivered to. In the game’s default casual mode, 8 points worth of logs must be delivered to each lumber mill for the map to be “beaten”. Maps start with a fog of war enabled and players can only see where they have previously traveled unless they drive near watch posts, special areas that can unmask large portions of the map. Time passes during play and the game has a full day/night cycle. The arrival of night brings on a sense of dread as navigation in the darkness is brutally difficult. New trucks are randomly scattered throughout the maps and are unlocked once you get close to them. Using them as soon as you find them can be a challenge as most of the trucks hidden on the map are damaged or not configured for the job required.

Every truck is capable of being augmented with attachments and those attachments can be configured at garages. Most maps start you off at a garage and you can outfit your ride with the equipment needed for certain tasks. Various trailer types are selectable, as are specialty tools like cranes for picking up individual logs. These are especially helpful for the times where you goof and turn over your loaded truck and spill logs out on the mud. All crane interactions are physics-based, making operations with it difficult to master at first. Becoming proficient at crane use provides massive rewards in many situations though. You can use the crane to push off of objects as a way to lift or tilt your load in a way that can help you escape of bad situation. 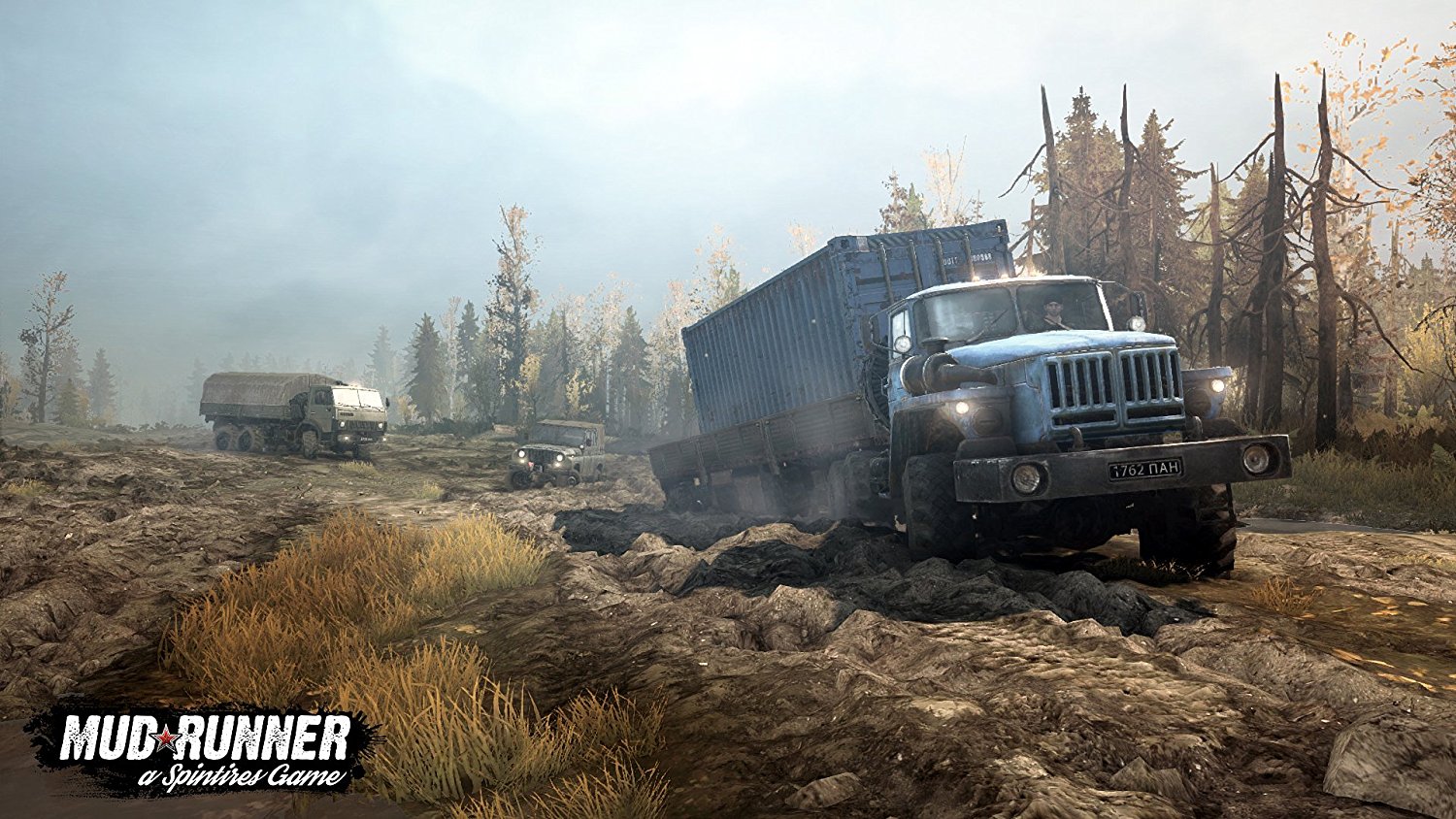 A fantastic multiplayer mode is included with Mudrunner. Using the exact same setup and maps as single player, multiplayer Mudrunner lets up to three friends join you to tackle the maps. Having some additional help is incredibly useful and helping each other along is very rewarding. Having 4 people is almost required for navigating with extremely heavy loads or situations where you encounter very steep grades or complex switchback turns. Having your group attempt to get an oversized set of logs up a rickety mountain path is stress-inducing. The margins for error are razor thin and a mistake could send one of the trucks (or the precious load) down the side of a mountain. The feeling of accomplishment for overcoming these types of obstacles is indescribable and where the real magic in Mudrunner lies. The only downside to multiplayer is that the terrain conditions and ruts in the mud are not synchronized between clients. Additionally, player headlights are also not visible between members of a multiplayer party.

The game also has full Steam Workshop support, offering new maps and trucks provided by the community. New for Mudrunner is full controller support and Xbox button prompts. Unlike the original game, you don’t need a mouse and keyboard to interact with all game functions. The original game also had no support for saving in multiplayer, which required crazy time commitments from participants to complete maps. MP saves are now fully supported and teammates can drop in and out on the fly. Once you get your feet wet with casual mode, hardcore mode awaits. It removes the shortcuts and concessions made by the casual mode and is considered the “true” Spintires experience. Vehicles consume more fuel, you cannot warp around the map, and logs must be manipulated manually. It presents a challenge as tough as anything you’d get from a Dark Souls game and can often feel less forgiving. 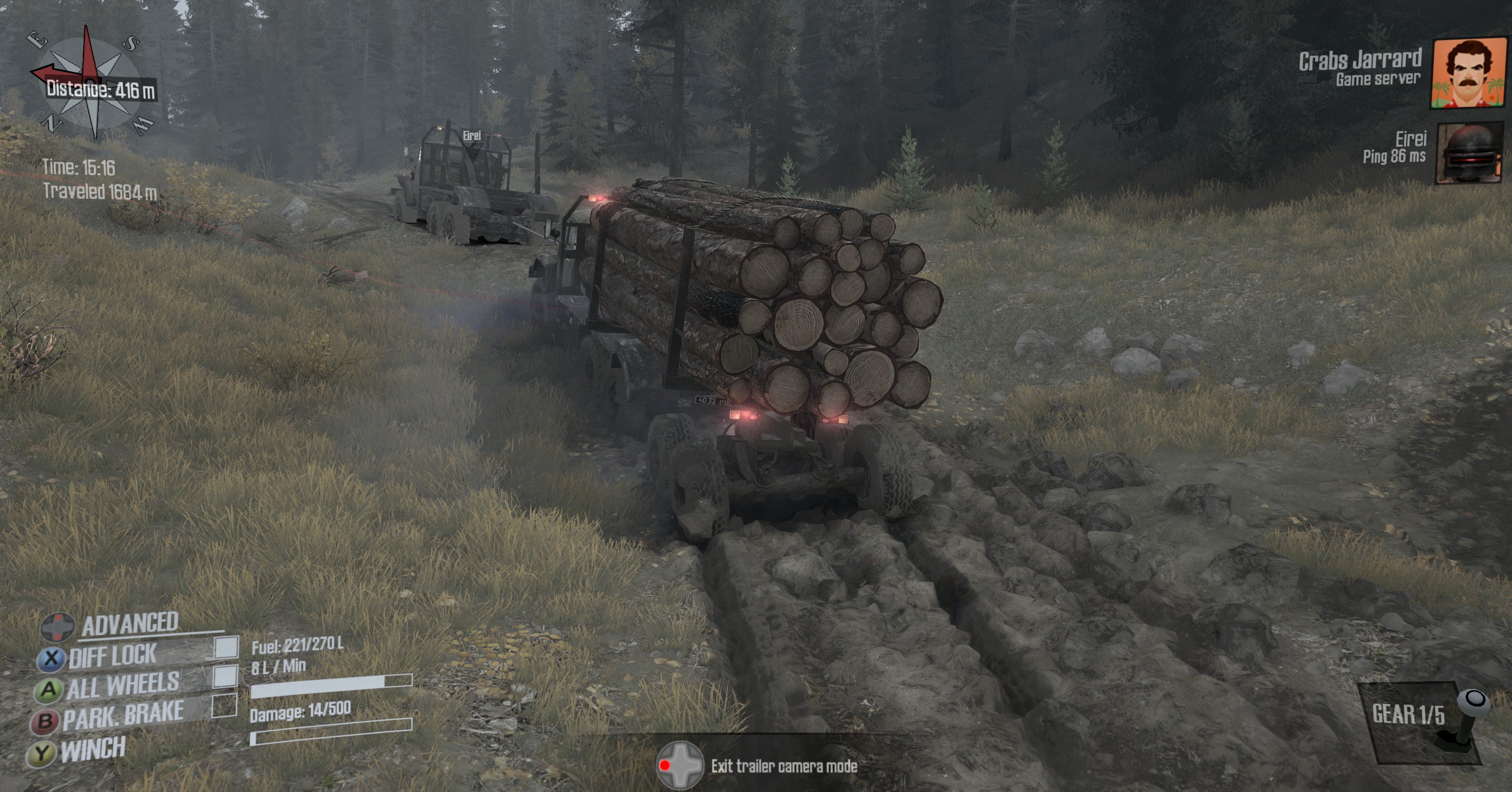 This game should not be fun. It has almost everything except its phenomenal mud and vehicle physics working against it. Often unfriendly to the point of misery, Mudrunner asks a lot from those who chose to engage it, but like many classic tough games, success simply feels sweeter. The music choices and achievement prompts are straight out of a PS1-era extreme sports title, but hearing the faint sound of butt rock as you near a lumber mill with your final load of logs re-invigorates you like seeing light after eons of darkness. This is the closest we'll ever get to a video game based on William Friedkin’s classic thriller Sorcerer. If you are a fan of non-conventional PC games, I cannot recommend Spintires:Mudrunner enough. 9/10 mudcaked super swampers

This review is based on the PC Steam release. The game was purchased by the reviewer. Spintires: Mudrunner was made available for Windows on October 30, for $29.99 or $14.99 for owners of the original.