It's been several years since games went on down to South Park. But with the town now in grave peril, only one superhero can save the town, be a hero to the people, and scoop up all the movie rights. That hero is The Coon, a.k.a. Eric Cartman, and players have a chance to join up with Coon & Friends in South Park: The Fractured But Whole.

Those expecting the same kind of action from The Stick of Truth will be interested to see that while certain elements of the game are the same, a lot of the RPG gameplay has changed. Shacknews recently had the opportunity to go hands-on and jump back into the small Colorado town to see all of the changes that have resulted from making the jump from fantasy to superheroes. 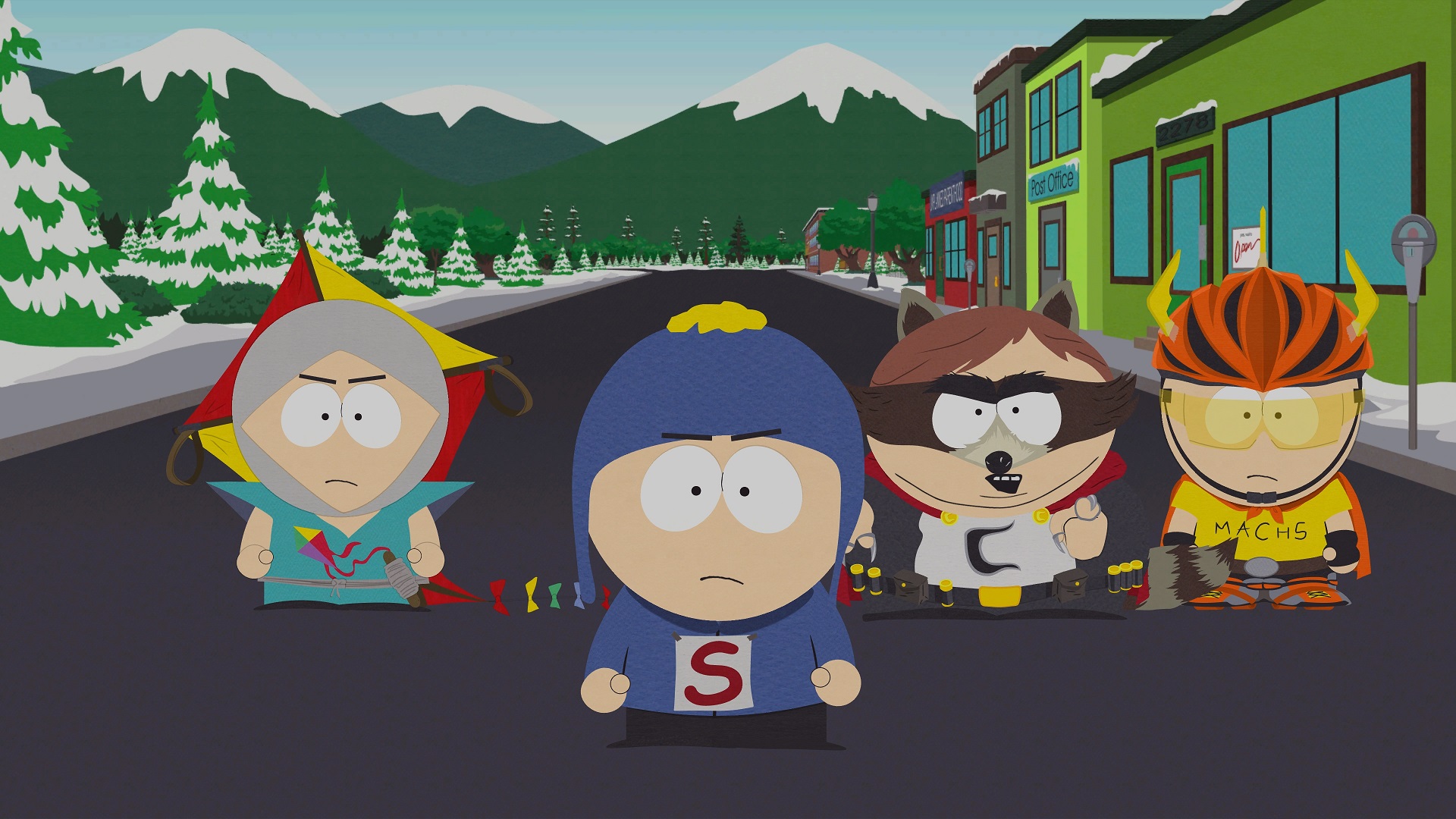 The start of the game puts players right back into the role of the "New Kid," who has ascended to the rank of King after the events of The Stick of Truth. Unfortunately, The Coon has come from "the future" to recruit a band of heroes to help in the critical task of finding a missing cat. The kids all switch to playing superheroes, which means the New Kid is basically starting from scratch.

One thing to note at the start of the game is that there appear to be more character creator options than there were in the previous South Park game. There are even multiple feminine features, though this is curiously not where players pick their gender. Yes, it is possible to play through the adventure as a girl, but the option to switch genders doesn't show up until about a half hour into the game when the player visits school counselor Mr. Mackey. It is here where players can opt to be male, female, or "Other." Out of my own curiosity, I ran with this "Other" option and it led to Mackey stumbling over his own words, as he quickly tried to assure my character that it was okay to be different and that it's fine to identify as nonbinary. It's exactly as awkward as one would expect from the South Park team.

What's interesting is that gender choice affects various portions of the game. Immediately upon leaving South Park Elementary, my character was ambushed by a gang of rednecks that were offended by my gender choice, forcing an encounter. A 2016 Entertainment Weekly interview with creators Trey Parker and Matt Stone that elements of the game will change depending on a player's chosen gender. That definitely appears to be the case here, as characters will address players differently depending on their chosen gender. Or in the case of the rednecks, players may have to deal with additional hostiles.

In battles with characters like these rednecks, players will have to accustom themselves to some different combat mechanics than the first game. While The Stick of Truth worked with turn-based combat, out of the book of classic Final Fantasy or Super Mario RPG, The Fractured But Whole works with a grid-based system. That means different attacks and spells can only reach a certain range, requiring an additional degree of strategy. For example, Super Craig's punch can not only cause damage to an adversary, but also knock him backwards into another foe, causing a chain reaction. It also means that another character following up with an attack that goes across may not work, since Super Craig will be blocking that attack's path. Players will have a full party to team up with, including Kyle's Human Kite, Jimmy's Fastpass, the aforementioned Super Craig, and Clyde's Mosquito. However, there will be a few situations, such as an unpleasant incident inside Father Maxi's church, where players will have to go it alone.

Attacks will vary depending on the player's chosen power set, which come right out of the best that comic books has to offer. Players can choose from Speedster, Brutalist, and Blaster abilities to start, with an option to add a second set of abilities later in the game. All of it likewise fits in with the player's tragic backstory, capably narrated with pathos by Cartman.

With that said, South Park: The Fractured But Whole is still a South Park game, meaning there's copious amounts of the show's humor to be found throughout the game. Whether it's Cartman's greed and ignorance, Craig and Tweek's lovers quarrels, or the fact that Morgan Freeman is running a taco stand for some reason, it looks like this game will have just as many references and callbacks to the show's 20 seasons as The Stick of Truth did. There are even a few references to The Stick of Truth, particularly the player's farting powers, which are put to the test at every single toilet across town. The DDR-style minigame placed in every toilet looks to be one of the more amusing side missions the game will have to offer.

That's just the beginning of what South Park: The Fractured But Whole looks to feature, with improved combat, ample room for exploration, and humor around every corner. Just about every character in the game has something to say and it's delivered in such a hilarious fashion, it'll be hard to imagine not laughing every other minute. Side missions, like filling up the player's Coonstagram page by taking selfies with as many people in town as possible, mean there will also be plenty to do aside from the main quest. After numerous delays, having a South Park package that looks even bigger than its predecessor feels reassuring.

Take to the streets with South Park: The Fractured But Whole when it releases on PC, Xbox One, and PlayStation 4 on October 17.