In a seemingly neverending sea of shooters, it's important to stand out above the pack, especially for a new studio like Boss Key Productions. LawBreakers has the benefit of the Cliff Bleszinski pedigree, but it still faces an uphill battle of standing out above a packed field. Fortunately, the game has cleared the first daunting hurdle, because it feels like a quick, entertaining, and slightly different take on the team-based shooter.

LawBreakers is filled with objective-based game modes that, on the surface, appear to encourage cooperative team play. After a couple of hours of play, that starts to feel less and less like the case. While the idea is to capture control points, control uplink stations, and the like, each game starts to erupt more and more with the total chaos expected of a twitch shooter. But because that chaos takes place simultaneously along the ground and all over the air, it proves to be fun more often than not. 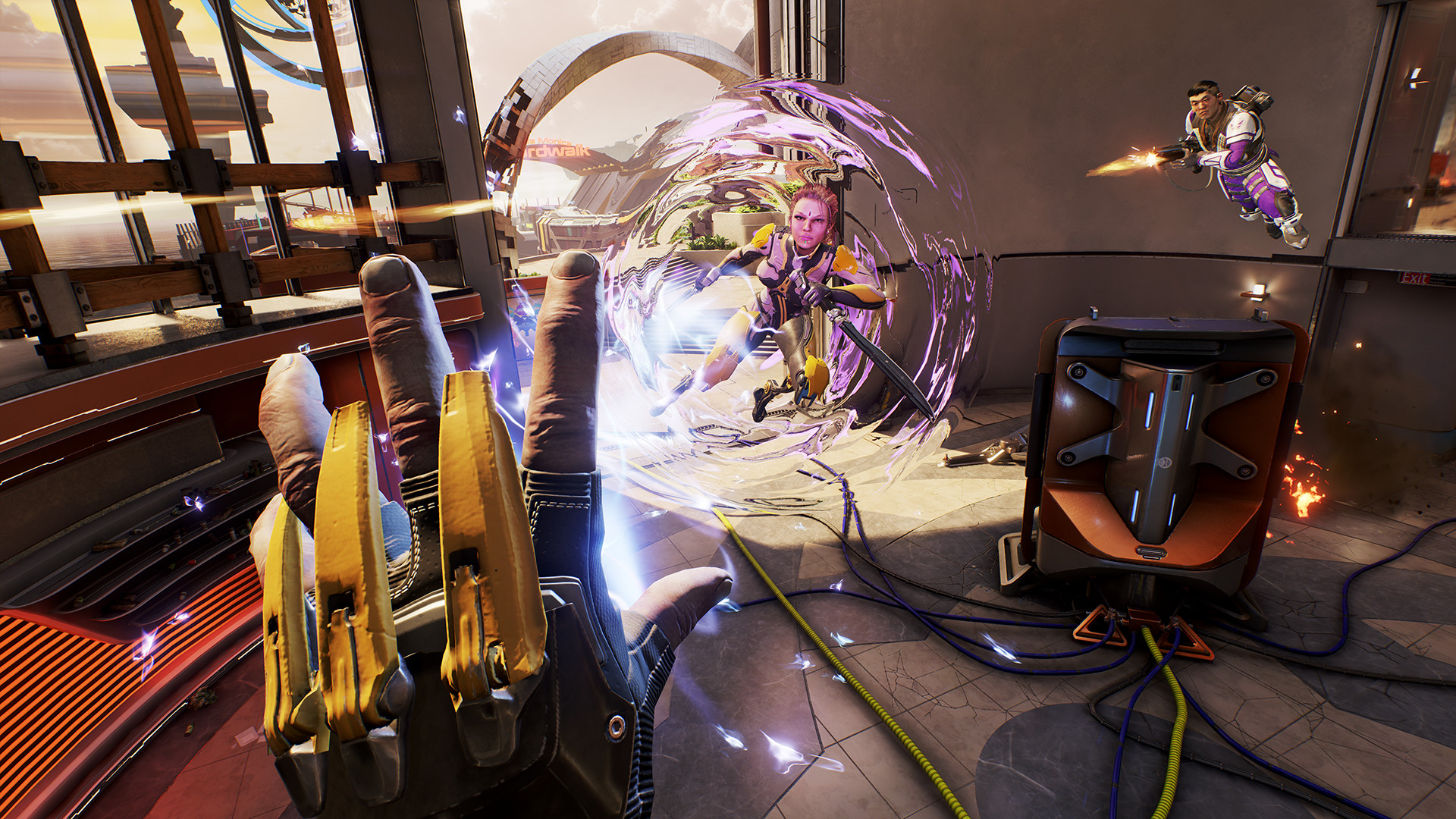 Each class isn't separated so much by team role as it is by weaponry and movement speed. Players aren't so much picking for roles, but more for what suits them better: a 12 gauge shotgun, a gatling gun, a massive laser, or any other variety of hard-hitting weapon? Not only is that suited to a player's comfort zone, but it also lends itself to a greater sense of balance. Each player also gets some variety of movement ability, whether it's the Wraith's Slide, the Enforcer's Distortion Field, or the Battle Medic's Hoverpack. All of these are designed for ground and air combat, which LawBreakers complements with its map design. Maps are designed with multiple stories, hidden nooks, and vertical platforms, which fit perfectly with the game's anti-gravity areas that have teams doing battle in mid-air. Anti-gravity combat is, by far, LawBreakers' greatest asset and always feels like the highlight of any session.

Unfortunately, the similarities between each classes also plays up the fact that the characters themselves feel faceless. There's no real personality on any of them and they don't really offer up any unique or stylized quips to go along with the fast-paced killing. For a game that's about pitting the altruistic Law versus the anarchic Breakers, the characters feel interchangeable. Each class gets its own distinct Ultimate ability that has the capability of wiping out scores of foes, yet the characters' expressions or dialogue never really match the intensity of these moves. It all feels basic, which makes earning character skins via Stash Boxes feel somewhat pointless.

One other thing to note about LawBreakers is that it feels purely designed for veterans of the genre. It feels like it's designed with the "trial and error" spirit in mind, where dying is supposed to be a learning experience until improvement eventually settles in. What was aggravating in my experience was that there appeared to be no real tutorial in place on PlayStation 4, a curiosity since there doesn't appear to be any such omission on the PC version. A comprehensive tutorial would work as both a gateway for newcomers, as well as a refresher for veterans that had long since hung up their guns from the Quake and Unreal Tournament days.

LawBreakers has a lot of room for growth, particularly given that the objective-based modes start to feel old and limited over time. In fact, the game design that rewards individual skill above all else makes the lack of any kind of Deathmatch mode feel like a head-scratcher. However, while Boss Key doesn't quite have an instant classic on its hands, there are enough cool ideas like anti-gravity combat in place that there's a sense of a foundation for something truly great. It's debatable whether it's the "Dark Souls of competitive first-person shooters," but it definitely stands out as a game with strong potential.

Nobody Saves the World review: I need a hero
Review for
Lawbreakers
7
Pros
Cons
Login / Register