Hellblade: Sensua’s Sacrifice drops players into the role of a Celtic warrior suffering from mental illness who must go on an excruciating journey into hell to save the soul of her dead lover. The game is developer Ninja Theory’s first attempt at reviving the mid-tier video game, building the title with a modest budget and smaller team. After being the driving force behind Heavenly Sword, Enslaved: Odyssey To The and the Devil May Cry reboot, this shift in creative process has yielded a game of the year contender and calling card for development teams flirting with independence.

Hellblade: Senua’s Sacrifice is the first baby born of the developer’s adoption of a Triple-A Indie approach that focuses on an open development process and lower price point all while attempting to maintain Triple-A production values. In the breakdown of Ninja Theory’s GDC talk about The Independent AAA Proposition, a key component involved taking creative risks in order to deliver unique gaming experiences. The foremost motivation for Hellblade revolved around mental illness and psychosis, which have both been tackled in gaming in less-than-tasteful gamified manners, but they’re given their just due in Hellblade with a well executed blending with gaming mechanics and environmental design. 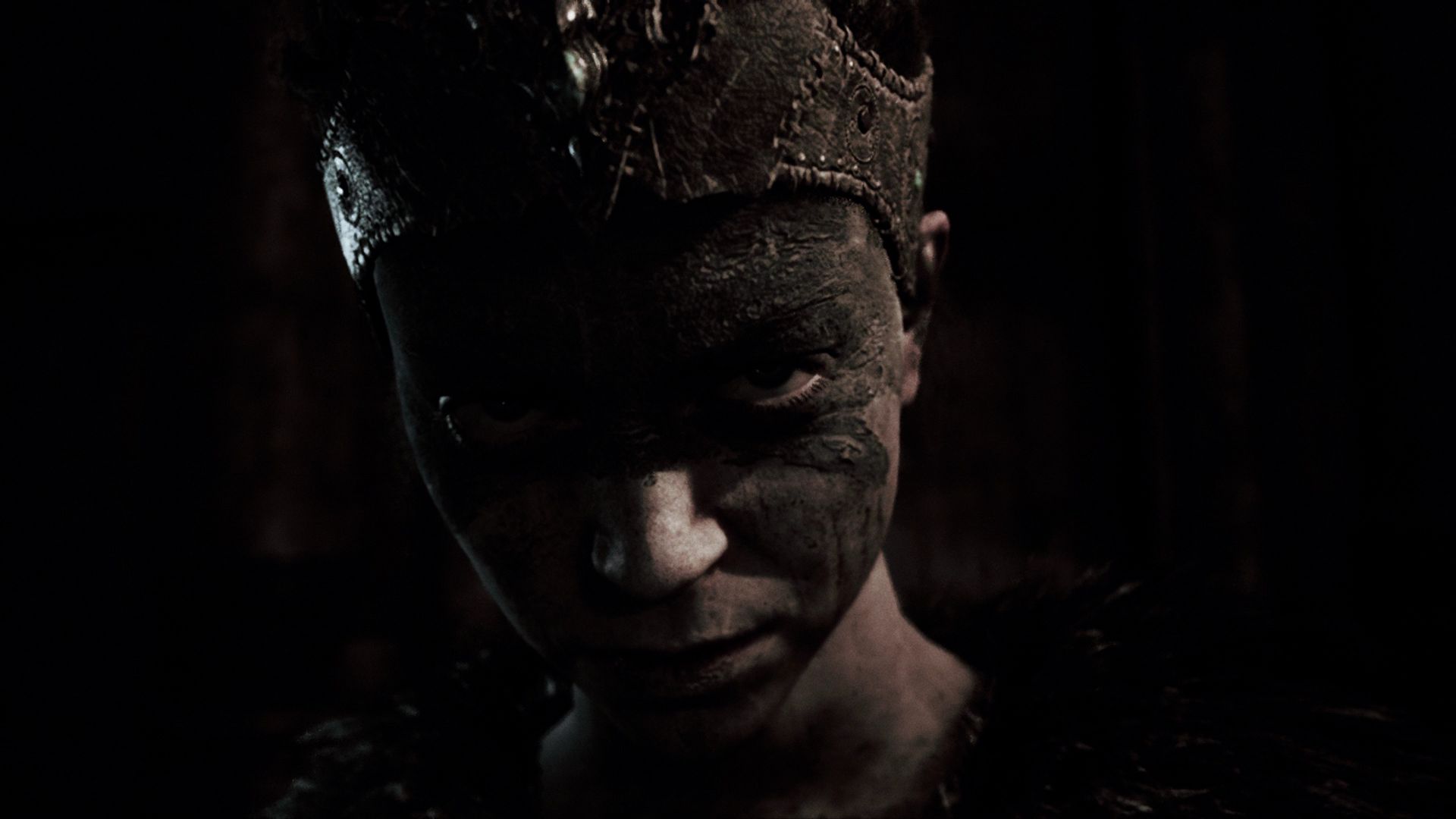 The majority of the game is unsettling in a unique way, a way defined by its incredible voice design. Ninja Theory utilized binaural audio for Hellblade, which is audio recorded using two microphones to emulate a three-dimensional sound sensation. Senua hears voices throughout the game and they are used well. The UI presentation is as minimal as it gets and you have no explicit tutorial on how to play outside of the lists of controls in the pause menu. Everything else regarding player input is learned from hints given by the many voices and they also clue you in on the finer points of the story and Senua’s world as you explore. They speak so regularly, in fact, it makes their rare moments of silence that much more unsettling. 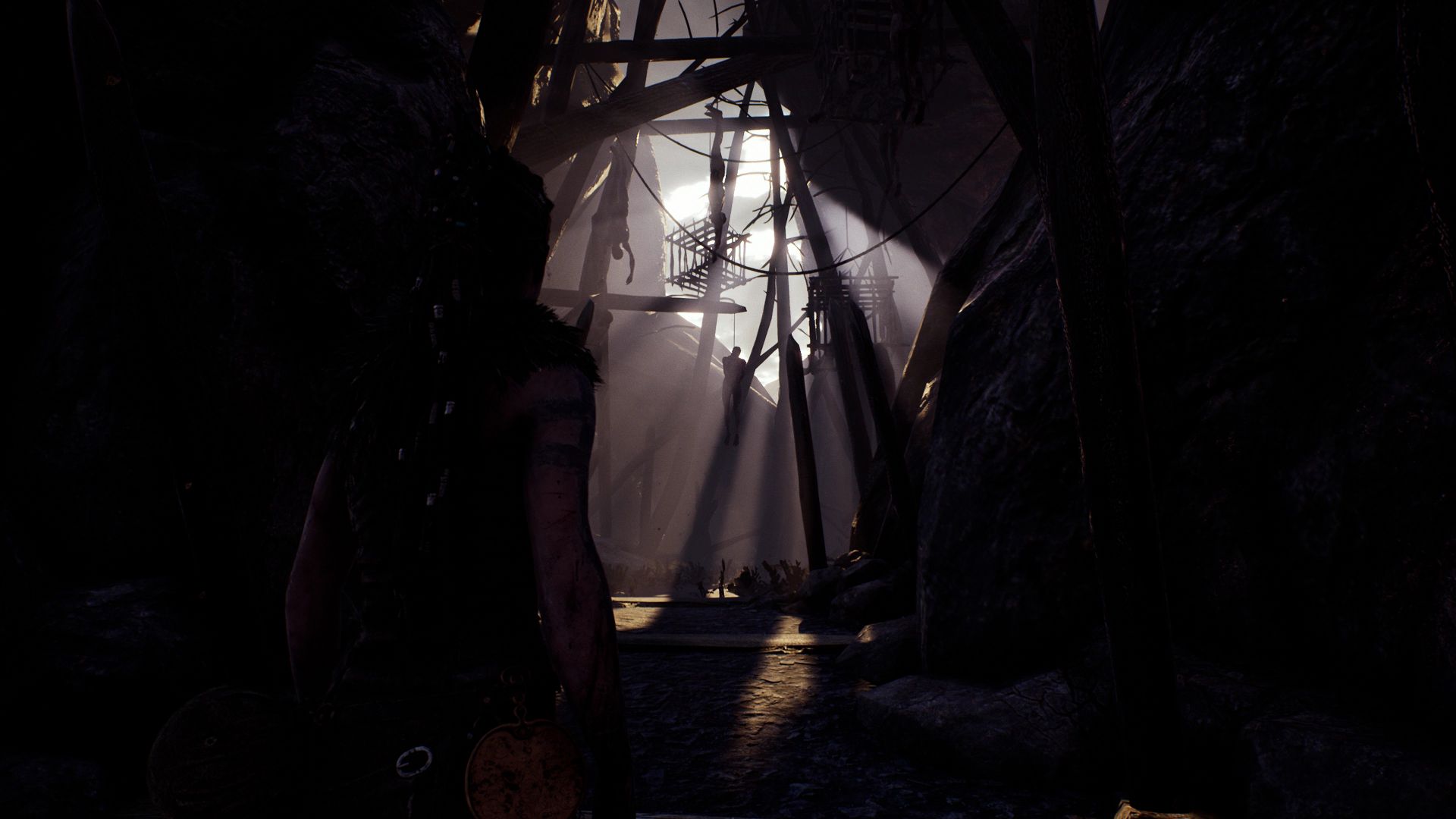 The voices clued me in on attacks coming from blind spots, they cast doubt and cheered me on as I attempted to complete puzzles, and they even incited utter panic in some of the tensest moments later in the game, yelling that I should turn back instead of charging forward. This is clearly one of the key components the representation of psychosis in the game and it is executed with perfection. Another key involves hallucinations and these are weaved into different styles of puzzles that along the two paths you take in the early stage of the game as you pursue a couple beings. One style was very chaotic and frightening in nature while the other showed off great environmental design as you maneuvered through areas riddled with illusions. 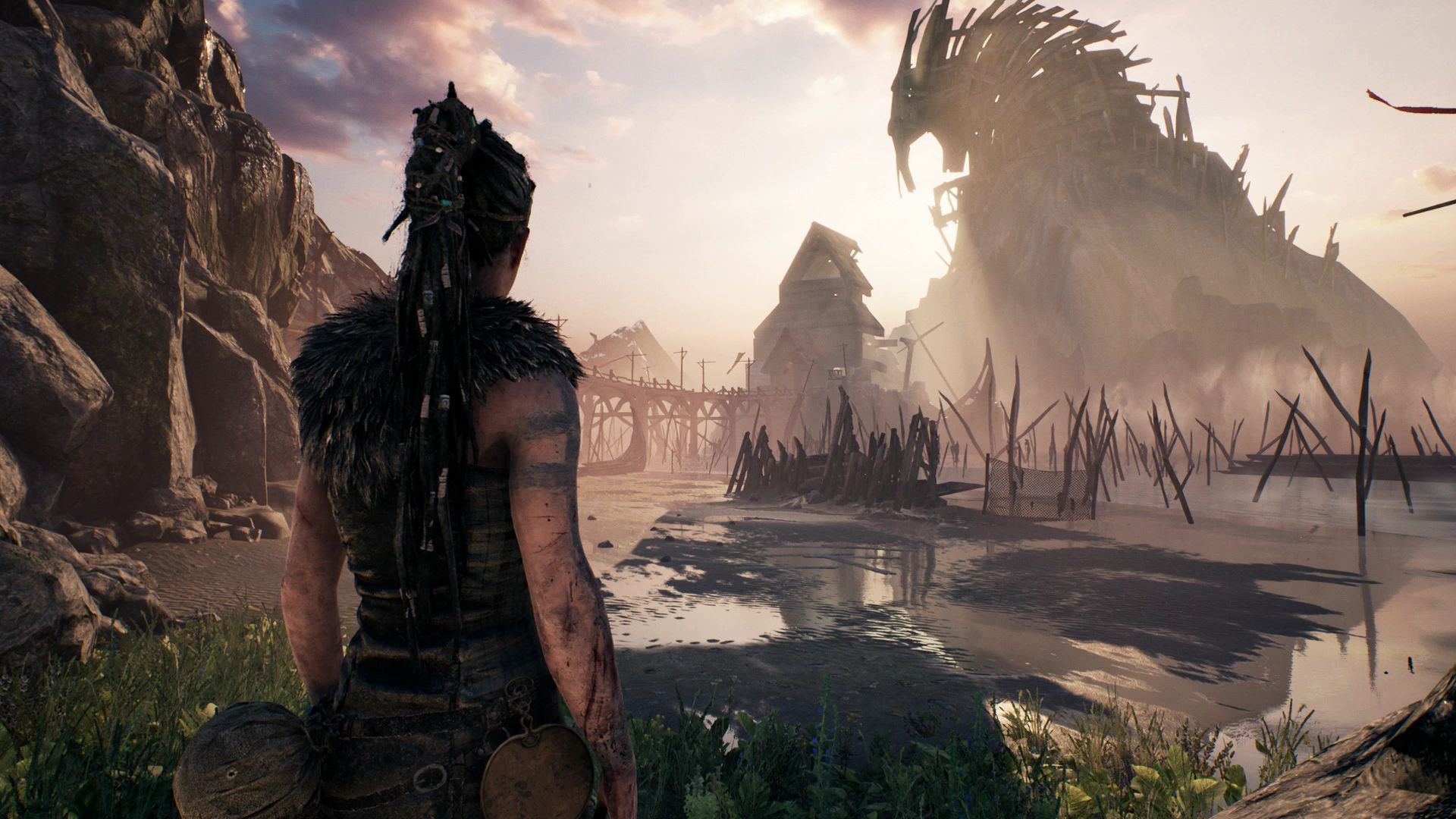 Later in the game, there are unsettling moments more akin to horror games, but even those moments have design. For example, one particular trial has the player maneuver Senua through a pitch black environment where you can only briefly see spaces when you focus and use her sense of hearing. There are creatures that are encountered but their ever-morphing design makes it seem as if Sensua’s mind is running wild with what these creatures may look like based on the sounds they’re making as you move around them. Sound design, in general, is top notch, the only misstep being the rare occasions when stepping in water results in an oddly muffled and distant sound.

The combat is present and potent but is used as a tool to supplement the incredibly tense moments that propel the plot. You have quick and heavy attacks along with a block and dodge, but Senua’s need to “focus” in non-combat moments does come into play. Also, instead of riddling the experience with a scattering of forgettable enemies, Hellblade keeps the enemy design count modest but each foe has their own unique approach to fighting. Those designs pop, too, in a game that manages to have incredible visuals despite a more modest budget and team. There’s also a very welcome weight to the structure of combat that makes fighting two or three enemies a tactical affair and Ninja Theory ultimately crescendos the combat into a series of conflicts that will test your understanding of the combat system to its depths while equipping you with new abilities that fit the arc of the story snuggly. There's a permadeath feature in place as well that will erase your save progress if you fail too many times, your personal intensity as you get further into the game and things get more difficult. 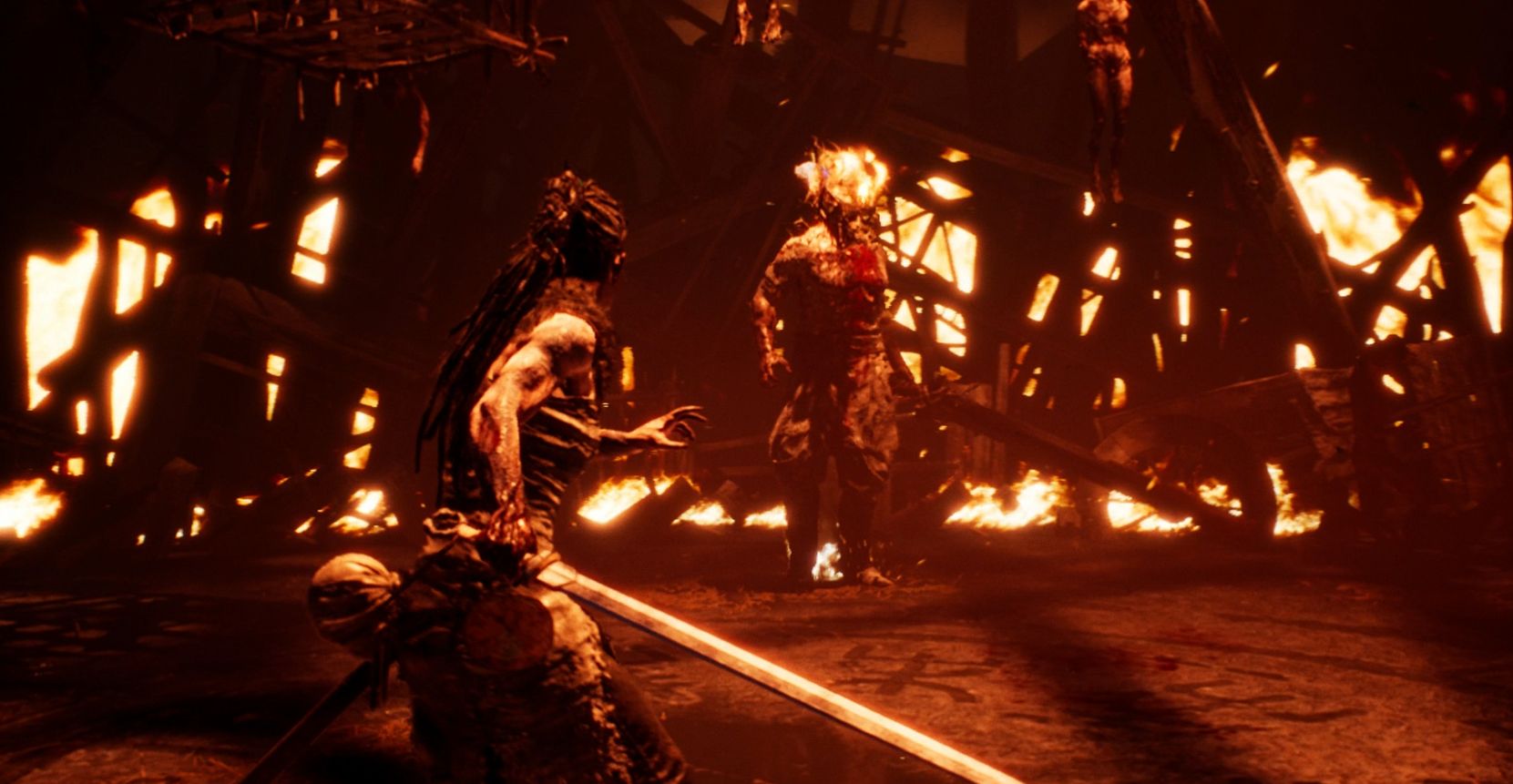 Senua’s journey is fairly linear, with a few areas opening up mainly to support the puzzles that must be solved. There are points to discover that will unveil the history of Senua’s world and the pursuit of them all could add an hour or two to what will be a 7-9 hour experience. Hellblade is epic in its presentation but is truly a deeply personal journey for Senua to overcome grief and her personal demons. Hellblade overcomes hiccups with incredible presence, immersive design, and an overall package that truly leaves an impression, not to mention the fact that it’s only $29.99. If this is Ninja Theory stepping away from mainstream gaming, may they permanently inhabit this “Triple-A Indie” space they’ve carved for themselves and usher in a new era that strikes the balance between creative risk and high-quality production

This review is based on a PS4 code provided by the publisher and the game was played on PS4 Pro using the optional 60hz option. Hellblade: Senua’s Sacrifice is now available on PC and PlayStation 4 for $29.99. The game is rated M. 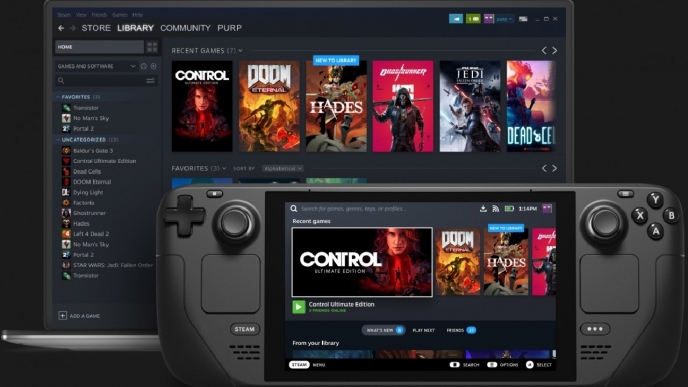