The final Death Knight Hero reveal is here and it's the Warlock. The unveiling comes from Hearthstone Game Director Ben Brode and Hearthstone expert/personality Brian Kibler, who revealed it live on stream. No more delays. Let's take a look at the Death Knight Warlock. 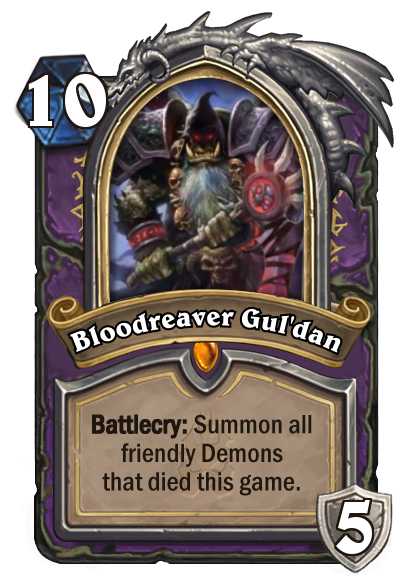 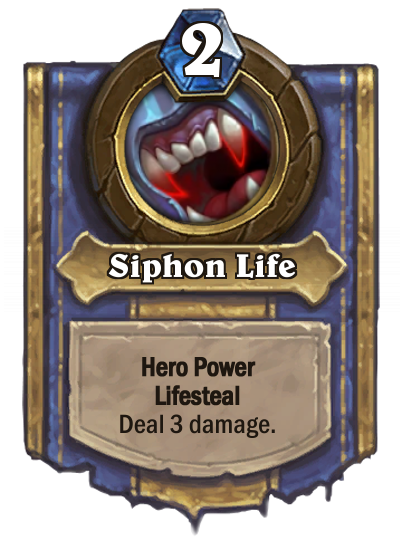 At the full 10-mana monty, this play needs to be worth its weight and it certainly delivers. This Warlock play taps into the N'Zoth, the Corruptor effect and returns the Warlock's dead Demons back to the board, while also offering up a 5 Armor boost.

The severity of Bloodreaver Gul'dan's effect is almost entirely dependent on the strength of the Demons played over the course of the game. Fortunately, there are some strong ones, like Abyssal Enforcer and Doomguard. The new Despicable Dreadlord becomes more of a Warlock staple now, especially since its effect will kick in immediately after the Death Knight play.

As Ben Brode mentioned, the Siphon Life Hero Power is a 6-damage swing, doing serious damage to low-to-mid tier minions, while also recovering health. By the late game, Warlocks will no longer need the extra card draw provided by Life Tap and will need to concern themselves with health recovery, making this an essential Hero Power to have handy. 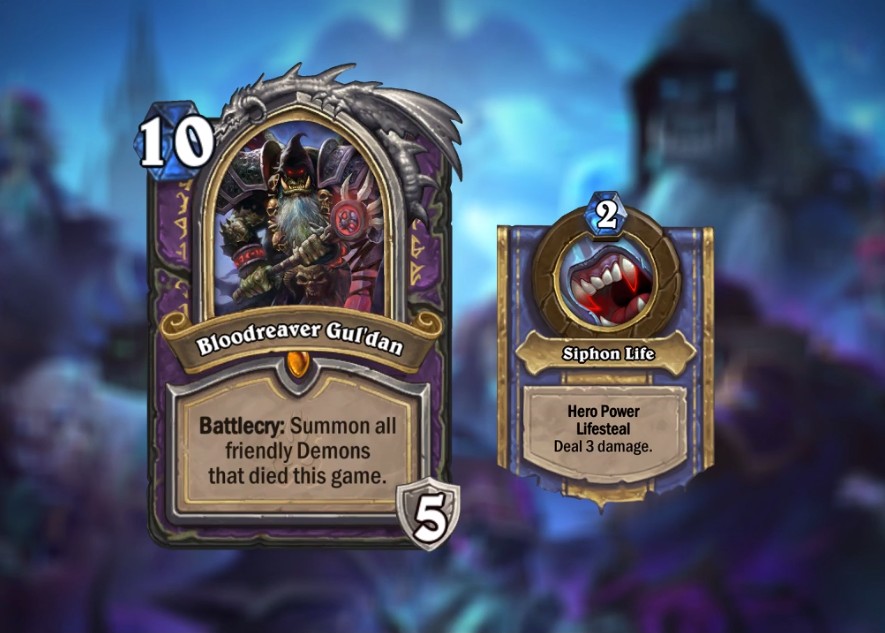 Bloodreaver Gul'dan makes a good case for Highlander Warlock decks and possibly the most compelling one since Reno Jackson went off to explore Wild. Kazakus can help bolster the Demon ranks, whether it's by providing random Demon minions or creating 5/5 or 8/8 Demons. Krul the Unshackled should be around for a Turn 9 play, since it can put Doomguard on the board without its Discard downside. As soon as the board gets cleared, play the Death Knight Hero card and watch that Doomguard come right back, with its Charge effect intact.

Those playing Bloodreaver Gul'dan will want to steer clear of the Discard mechanic, since he can only resurrect minions that were on the board and died. Losing valuable minions to Discard would be foolhardy, so maybe steer clear of that Soulfire spell and only play that Doomguard either as a last resort or as part of a Krul the Unshackled turn.

Finally, it's worth asking whether Lord Jaraxxus has a place in this deck. On the one hand, it's hard to see a place for him, since the Bloodreaver Gul'dan play establishes immediate board presence and should theoretically have the game wrapped up. However, what if that massive board presence somehow gets cleared, via an area of effect spell? Jaraxxus would be fine as an emergency play whenever Warlock players need to re-establish board presence and go back on the offensive. It just depends on if those players need that board presence badly enough that they'd willingly dump that Siphon Life Hero Power. It's doable, but Highlander deck players should be careful not to summon it when playing Krul the Unshackled. 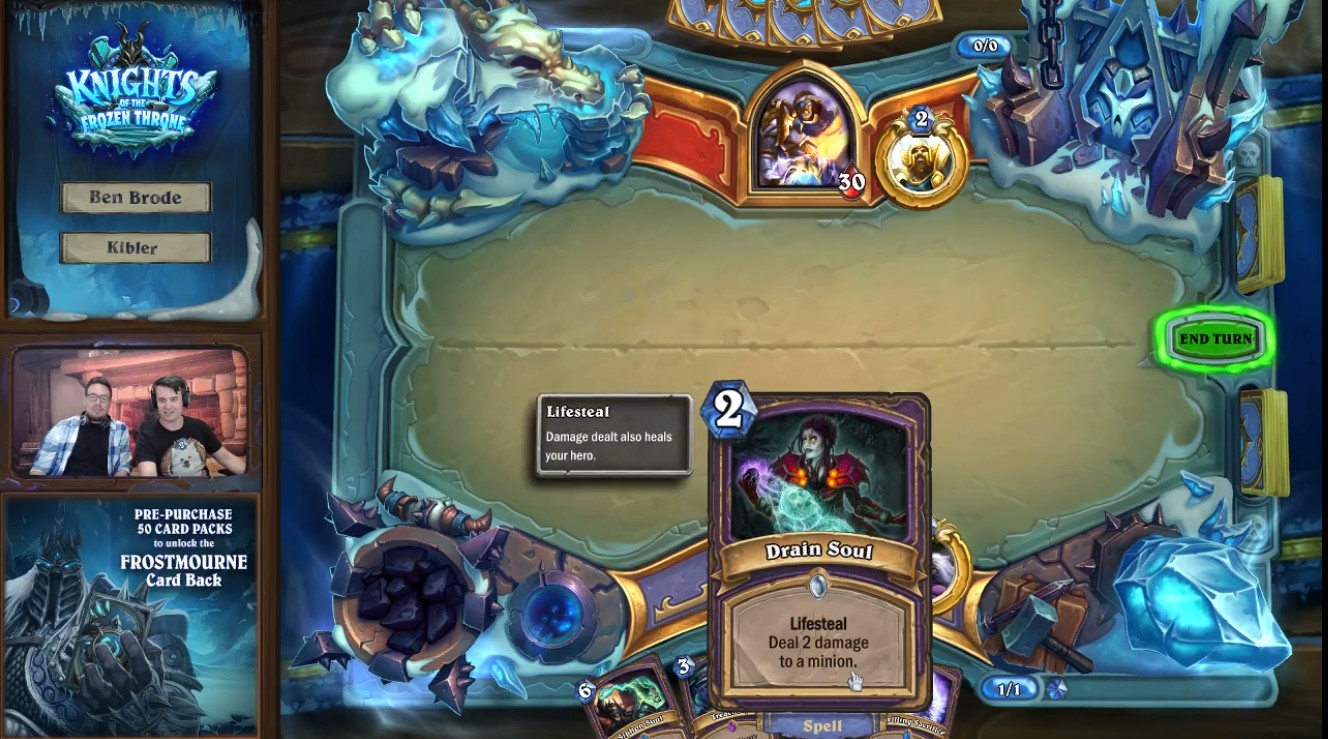 Bloodreaver Gul'dan is as strong as the Demons he resurrects. Given that few, if any, have any real Deathrattle effect of consequence, it's fine to let loose with board-clearing spells like Brawl or Twisting Nether.

If Bloodreaver Gul'dan's board gets cleared, it's going to be hard for him to come back, especially since he'll no longer have the Life Tap Hero Power available to him for card draws. Focus on clearing the board as soon as the Death Knight is played or try to go toe-to-toe with him by playing something like N'Zoth the Corruptor.

Freeze Mages will laugh in the face of a Death Knight Warlock, since it can simply freeze all of its Demons and keep right on firing away at the face. This will undoubtedly be a bad matchup, as will any aggro deck that can polish off the Warlock before their big Turn 10 play. Since Warlock has few ways to protect itself (especially since Reno Jackson's departure), it has had a lot of trouble lasting the full ten turns in the recent meta. Nothing about the new Death Knight or the new cards indicate that this will change much going forward.

That's all, folks! Hope you've enjoyed the Death Knight breakdowns, but the analyses aren't over yet. There are still cards to break down, so be on the lookout for Shacknews' analysis on the rest of the expansion's cards before Thursday's expansion release date.